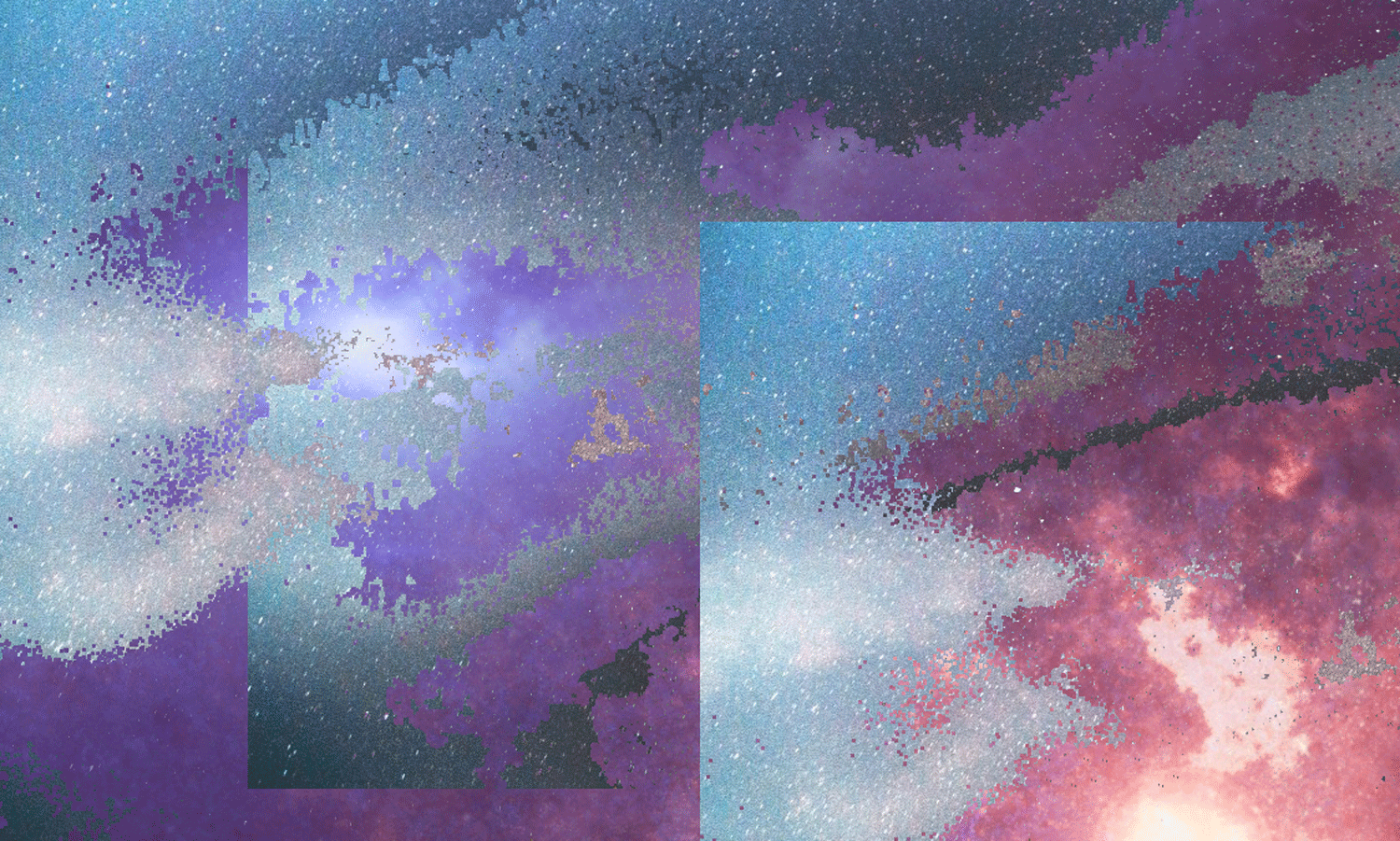 Enter the worlds. What a dream. And it’s made for dreaming. These words that I echo are the counterpart of other words said earlier, posted under the title Brane Worlds. The between two worlds is the empty space between two branes. Nothing convenient, car without driver, no-body’s land forever fertile, always closed to deaf low ceilings, without smell, without intuition, without idea, without concept: academics. Whose name is said: disunited to Cythera.

I walk on the avenue, my heart open to the unknown, from one leg to the other in the Champs Élysées of the Milky Way, change of scale, my leg is the size of a galactic cluster. No, well, from a super heap. A bundle of billions of light years, enough to light up hell, and dark matter, and even the dark conscience of a dumb scientist. I love to rub myself with comets, like sand fleas on the beach of my childhood, in Erquy, France.

The non-existent environment is dangerous for biological beings. That’s why there are so many creatures from the underworld swarming around. These oddities that Castaneda calls inorganic. That it would have been better to translate as non-biological, in good French. They are not dangerous unless you tell them yes. They can’t lie to you, you can. They offer you mountains and wonders, they are the princes of the matter. In exchange for their gifts they will ask you to stay with them.

If you say yes, you will lead a rich and famous zombie existence on earth, while your soul, your true self, will forever be trapped in the lower strata of this plane, among the inorganics of the underworld. This recurring behavior is at the origin of the belief in the pact with the devil, in the renunciation of his soul in exchange for wealth and power, and in the signing of the promise with his blood.

Heavy smoke with golden hues, acrid hint of black inn, inhospitality, unpleasantness, rubbish! The place has its charm, which is not to the taste of humans. I am barely human. And there, not at all. But I didn’t sign anything. Never. Not so stupid !

Enter the worlds. Enter my good friends. Be one of them. And half. 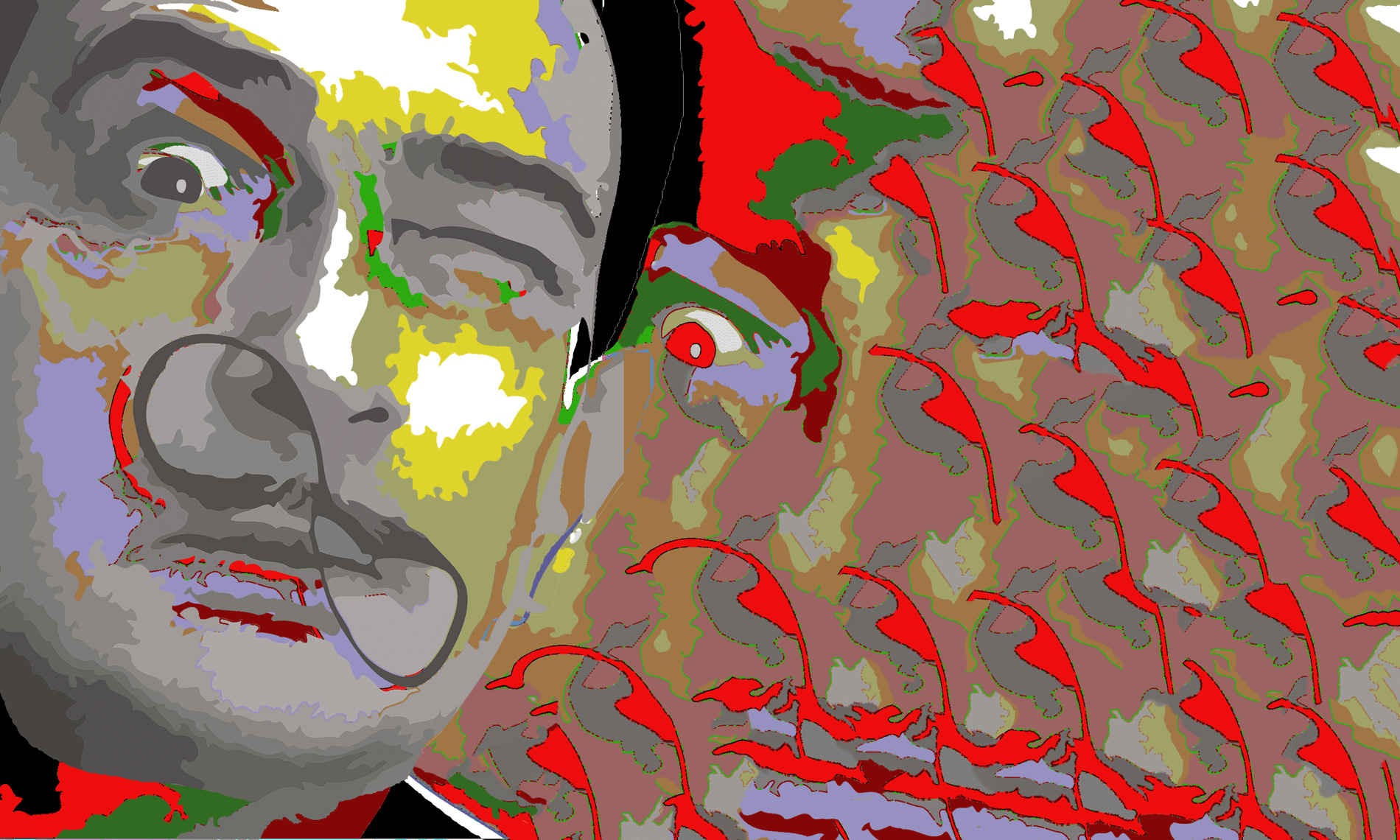 Science will always run behind the poet’s vista. When he lives, science comments. He sniffs, the scientist smokes. He passes, the scientist breaks. When science thinks, it dances. Isn’t it a Pythia?

The vista of the warrior, the sorcerer, the seer has nothing to do with that of the poet. I have all four, so I can compare. Which one do I prefer? No comment.

It is by flirting in these confines that I draw the secrets of time. They grow in abundance in these autonomous areas. I harvest and reap. The rain that falls there is crystallized emotions. The non-temperature liquefies them. If I had a skin, these drops would probably burn it. But the astral body does not have these weaknesses. It can face the highest temperatures, the hardest and most hostile material does not stop it. This is how he loves to cross the stars.

When you think you get all the answers, the universe comes and changes all the questions. (Jorge F. Pinto)

Love what we will never see twice, he says, this famous poet. In this case, Vigny in a dated poem.

So love everything! It’s crazy ! We only see once. The same water will never pass under this bridge. Dazzled by the spectacular, Vigny obscures the depth. The exceptional is a stone’s throw away, who will see it? The banal is in the eye of the beholder. The wonder in the eyes of children who can still see. Promises of flowers, they have and waves in their eyes and the sparkle of dawn.

The adult’s eyes are vague. Drowned with leech worries, he is never in the present. Here and now is an inaccessible grail for a grown-up. However! You will never see twice the view you have from your window. It is never the same, depending on the lighting, the clouds, the mood of the moment. A host of things happen that you can no longer see, drowned under the screen of deja-vu. The banality is to have lost the extraordinary in the ordinary.

Everything changes, quickly or slowly, more or less, hard or soft, all at all or not much, in crazy time or all at once, admit it, everything changes. Take a break for a few moments and come back to read these words. The meaning is no longer the same. Who has changed? The sense or you?

If you change as quickly as the setting of your life, you are only half out of phase. But fucked well anyway. It’s your frame that annoys, it’s him that needs to be broken, not your ordinary morale. True life, duly lived, gives way to constraints and shackles. Don’t wait until you’re 50. Change. It’s time. 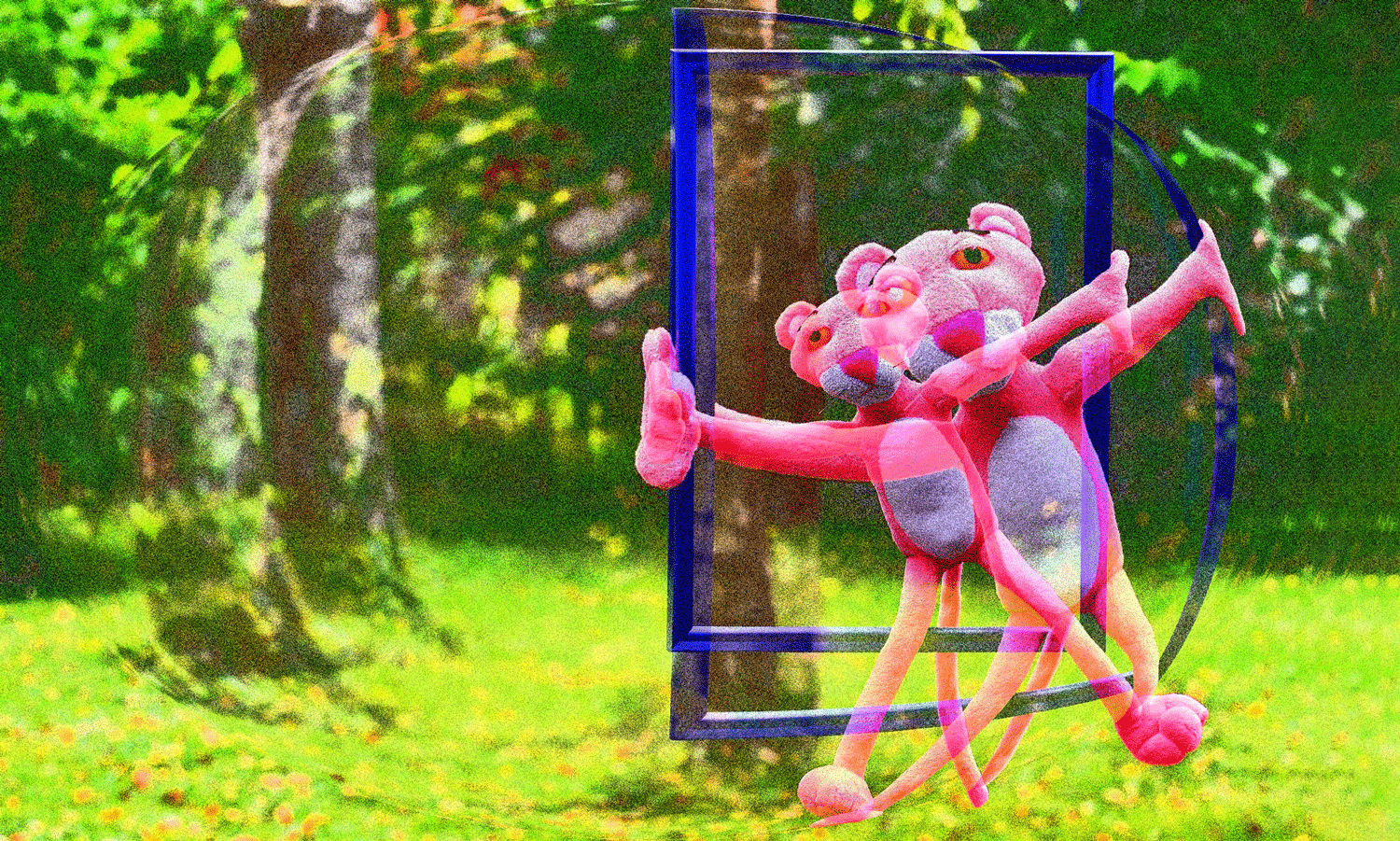 The butterfly comes out of the cocoon. Drunk with flight, stuffed with nectar, he turns, he flits, he twirls. Boosted, it flies over a summer that is flying away. It takes the wind, the wind carries it and in the suddenly frozen air it performs a triple somersault not stung by worms. Like all his family, he is a poet. Do you see a frame around it? Does he want or need it? Point. He lives as he flies. Free butterfly. The frame is drawer, dying, damper. The frame is boring. Coating. Stealing.

The frame is also useful, when you are looking for your line, when you wander before your destiny. Until you have become who you are, the executive can help you. It is a medicine. A balm. When it has fulfilled its function, the patient is cured, but he still has to cure its undesirable effects. Purge the antibiotics. Back to organic.

Difficult to stay sunny under the hailstones. Solution: keep the altitude. Stay above the clouds. Win between the two worlds sheltered from storms. Alone and stupid. One shines there only for oneself. The heat that we don’t share burns like a waste. Torture is the smile you can’t kiss.

Should we hesitate to live when it is dangerous? Yes ? But living is dangerous! Should not be born. Everything is good to those who expect nothing. Who can disappoint me? My expectation is turned to God. Or eyes? Odious.

Happy as God in France, said this verse of my childhood. But which one? Everything has changed, except the taste. Happy like a pig in the mud. He gets wet and wanders like a pig in the dirt. Little slut, little ass.

The sea in the distance

Smoke wiggles on the horizon. She is getting fatter. It is the smoke of a 1910 ocean liner, a transatlantic. With men, women in crinolines. On the aft deck, we play shuffleboard. With ladies, gentlemen by gibus. Lots of grace, elegance and polite boredom. We yawn behind a hand gloved with fresh butter. Clear tuxedo, sportswear, jodhpur, casual dressing. Beautiful linen. I contemplate at leisure. The large ship passes a few cables from the cape. On the stern his name is spread out in gold letters. Saint Catherine. Everything we plant takes root.

I’m twelve on the beach. Bathing. Calm sea at sunset. Mirror. The reflections of the declining sun draw an arrow of light on the sea right towards me. I’m calling my sister. 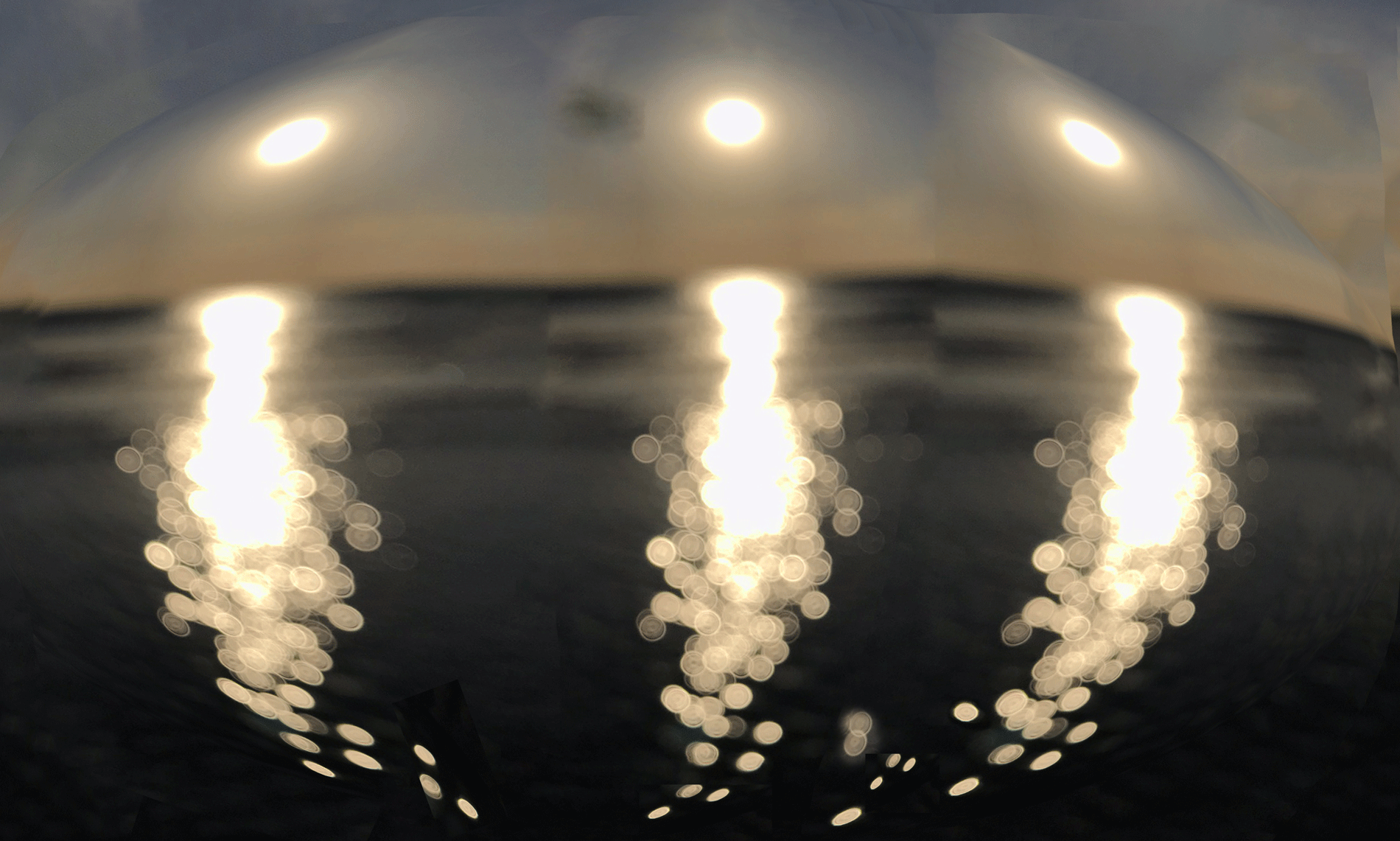 I don’t want to believe, I want to know. (Carl Sagan)