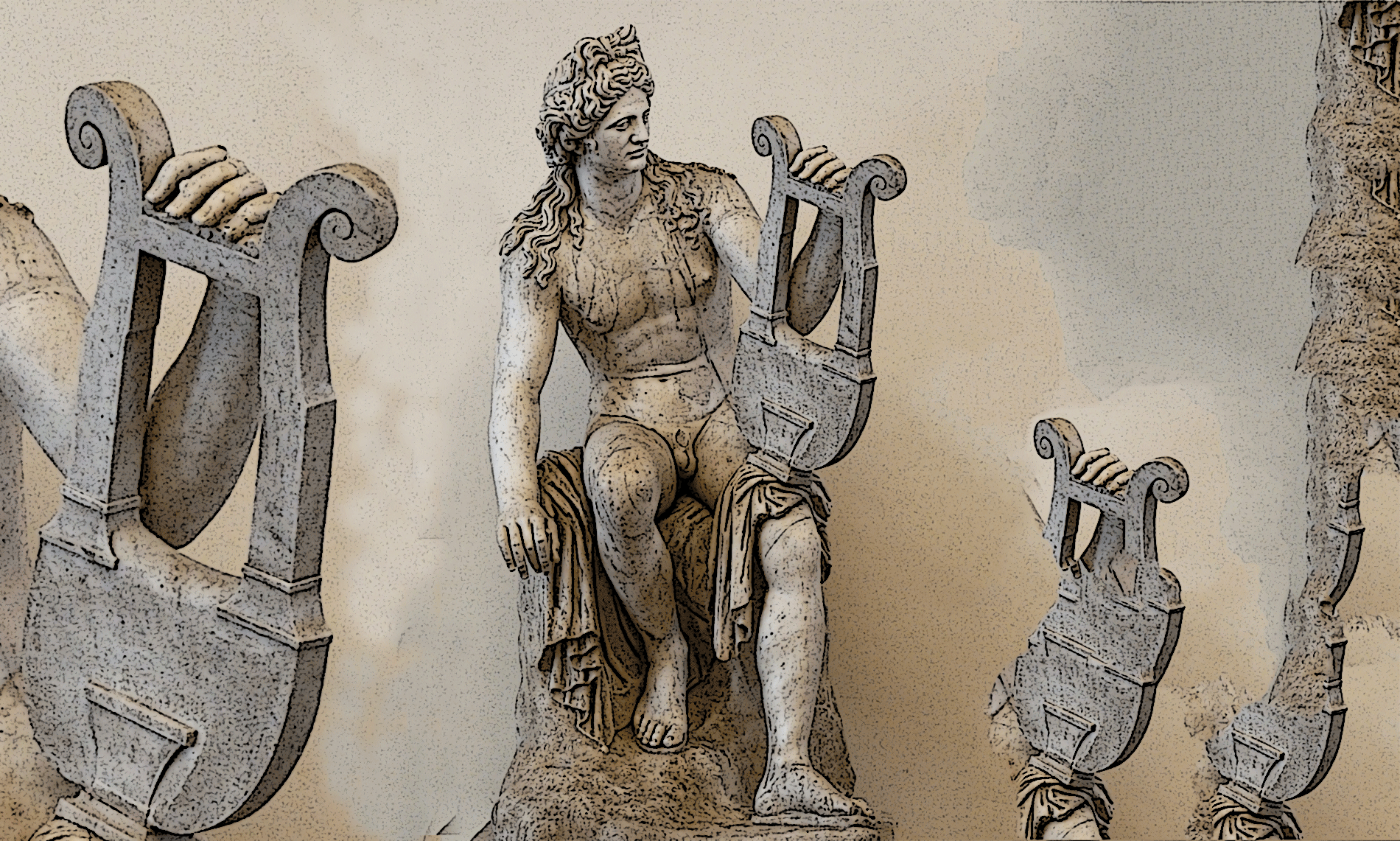 I would like to talk about the magic of sounds. They can charm our ears, move us, even scare us, yet the most impressive aspect of the sounds is not in the music. In any case, not in the music we know.

For this visit, I chose as a guide God Apollo. Son of Zeus, he took over from his father on the latter’s death. Yes, God is dead, another god is called to reign. It is that simple. Unlike his father, Apollo has no taste for politics. Brought to power by a paternal will, he seeks to flee the duties of his royal office.

Of legendary beauty, in love with refinement and the arts, Apollo is the prince of musicians. The spellbinding melodies he draws from his lyre do wonders and enchantments. He also has another gift: to heal. His divine attribute, the lyre that never leaves him, plays a major role in his healings. Under the expert fingers of the god, this lyre is much more than a musical instrument.

Apollo is the son of Zeus and Leto. For Hera, the legitimate wife of Zeus, Apollo is a bastard and his mother Leto a bitch who deserves no mercy. Pursued by Hera, Leto takes refuge on the island of Delos. His father Zeus learns of his birth. He gives her a lyre, a chariot drawn by swans and a gold miter. (source)

The gifts of a god like Zeus are more than precious. In the hands of Apollo and then of his son Orpheus, the lyre will do wonders, curing illnesses, dissipating madness, awakening the sleeping, illuminating the morons. But there are two other gifts to consider: the flying chariot and the golden miter. 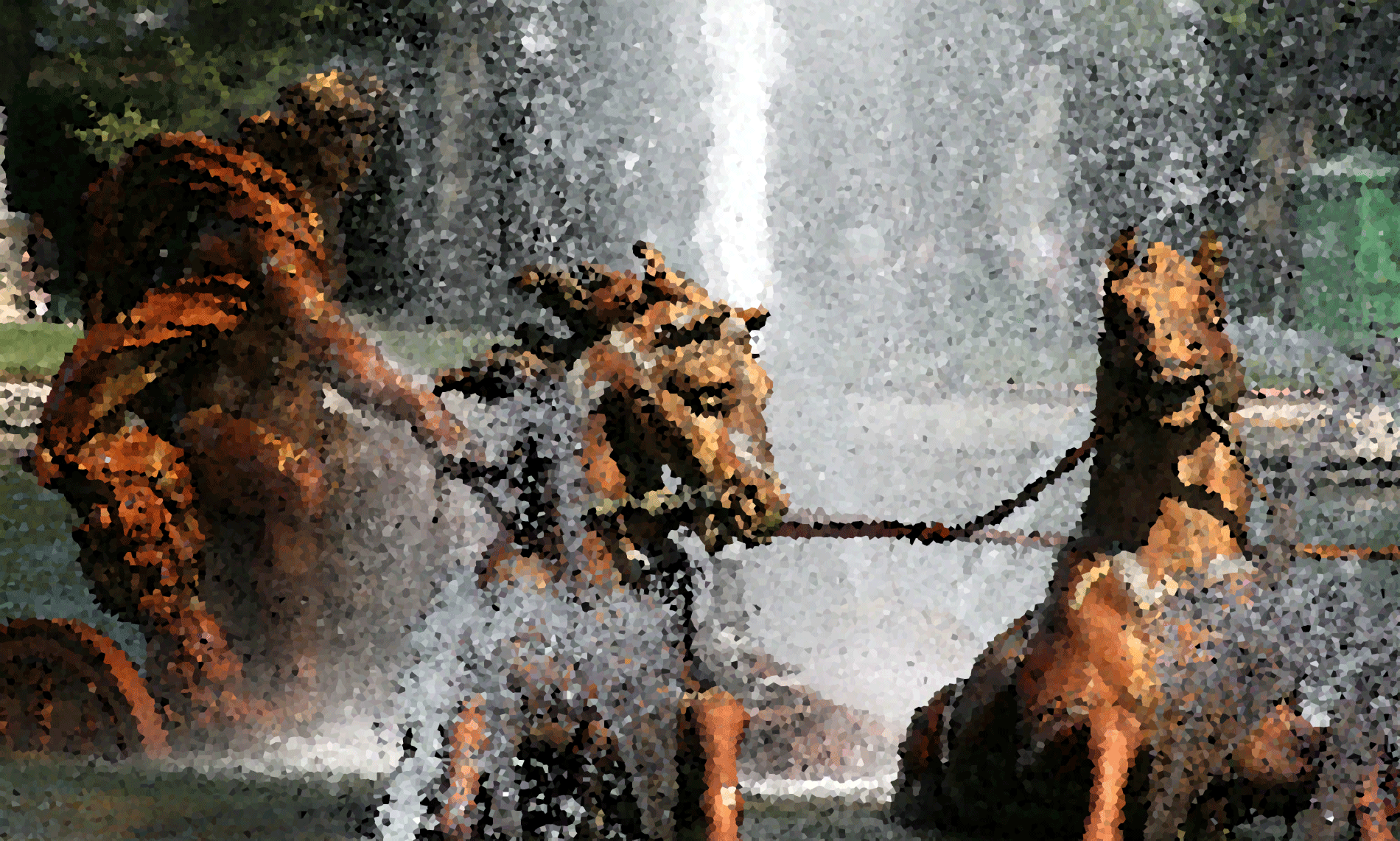 The chariot pulled by swans is a metaphor for a flying object, plane or space shuttle. Involuntary metaphor: the writers of this legend were not direct witnesses. They interpret facts that are already very old. We have seen that the Golden Fleece designated, in the same way and for the same reasons, not a vulgar ram skin, was it gold, but indeed the personal supersonic plane of Rama the ram god.

The miter is a very significant gift. Before being the ceremonial headdress of the Catholic bishops, the miter was the attribute of Mithras. Christ Mithras, true founder of archaic Christianity, was wearing the Phrygian cap, formerly named “miter” in reference to Mithras. 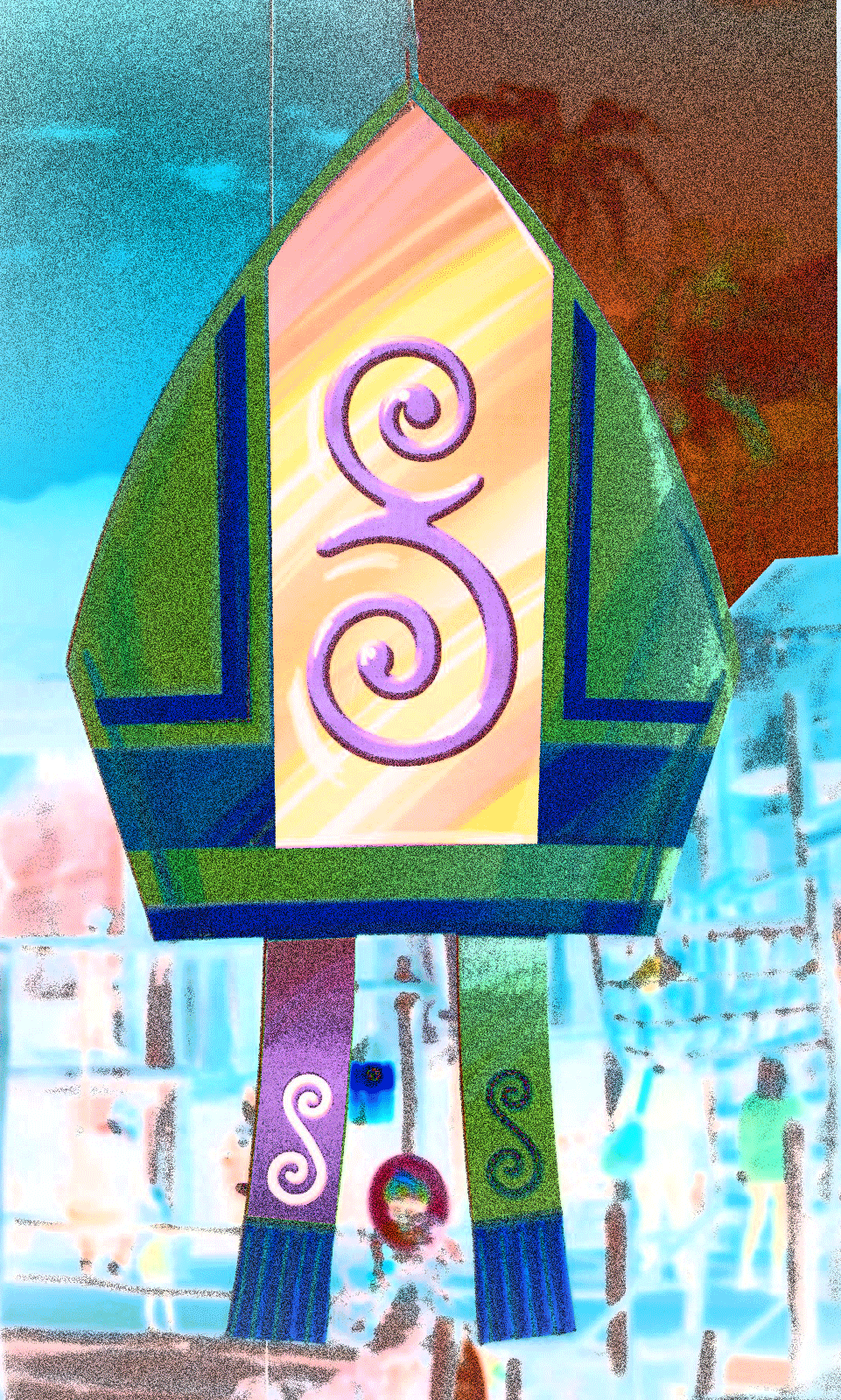 Giving a golden miter and not a crown to his newborn son was a way for Zeus to send him a message. “You will not be god of the gods like your father, but Christ benefactor and savior of men.” As will be Mithra in his time. This is why he wore the miter of Apollo, who was the first Christ, tied with his uncle Prometheus who will succeed him and reign over Olympus.

The miter is a sign of recognition which affirms: I am a Christ, I am a Christian. This Christianity is not the religion of Jesus who has only the name Christian. I am talking to you about the previous Christ who advocated the awakening of the followers instead of the sleep of the faithful. The golden miter says loud and clear that whoever wears it is a door to elsewhere.

Apollo is a healing god. A mortal god, like all the former gods. To avoid confusion, it would be better to say a superman. Yes, a superhuman in the Nietzschean sense. Übermensch.

Nietzsche has spoken a lot about Apollo. He retained in him only the musician whom he imagines cold, geometric, disembodied. He opposes this Cartesian Apollo to a god of excess, intoxication and fornication: Dionysus – called Bacchus by the Romans. The young Nietzsche devotes one of his first works to the supposed rivalry between Dionysus and Apollo. This work, The Birth of Tragedy marked the end of my adolescence. The high priest who read extracts from it aloud was called Jean-Claude Devictor aka Devic. We were 19. We have been friends for 15 years already. And still, wherever he is, he is still my beloved brother.

You know how much I appreciate Nietzsche. Allow me, however, not to share his vision of Apollo. If one has to oppose this god to some other, Prometheus seems to me a more credible rival. They are alike, they are both Christs, benefactors of the human race.

For me, Apollo is less a musician than a sonologist, or a sound therapist. He heals with sounds. This is his talent, his know-how and his priesthood. Throughout his life, he continued his work of healing and awakening among men. Mythological stories require a re-reading of the heart, not the eyes. Feel, relive, understand, interpret. This is my jubilant task. And the saga emerges in majesty from the vaporous ruins that the wind erases.

The Oracle of Apollo 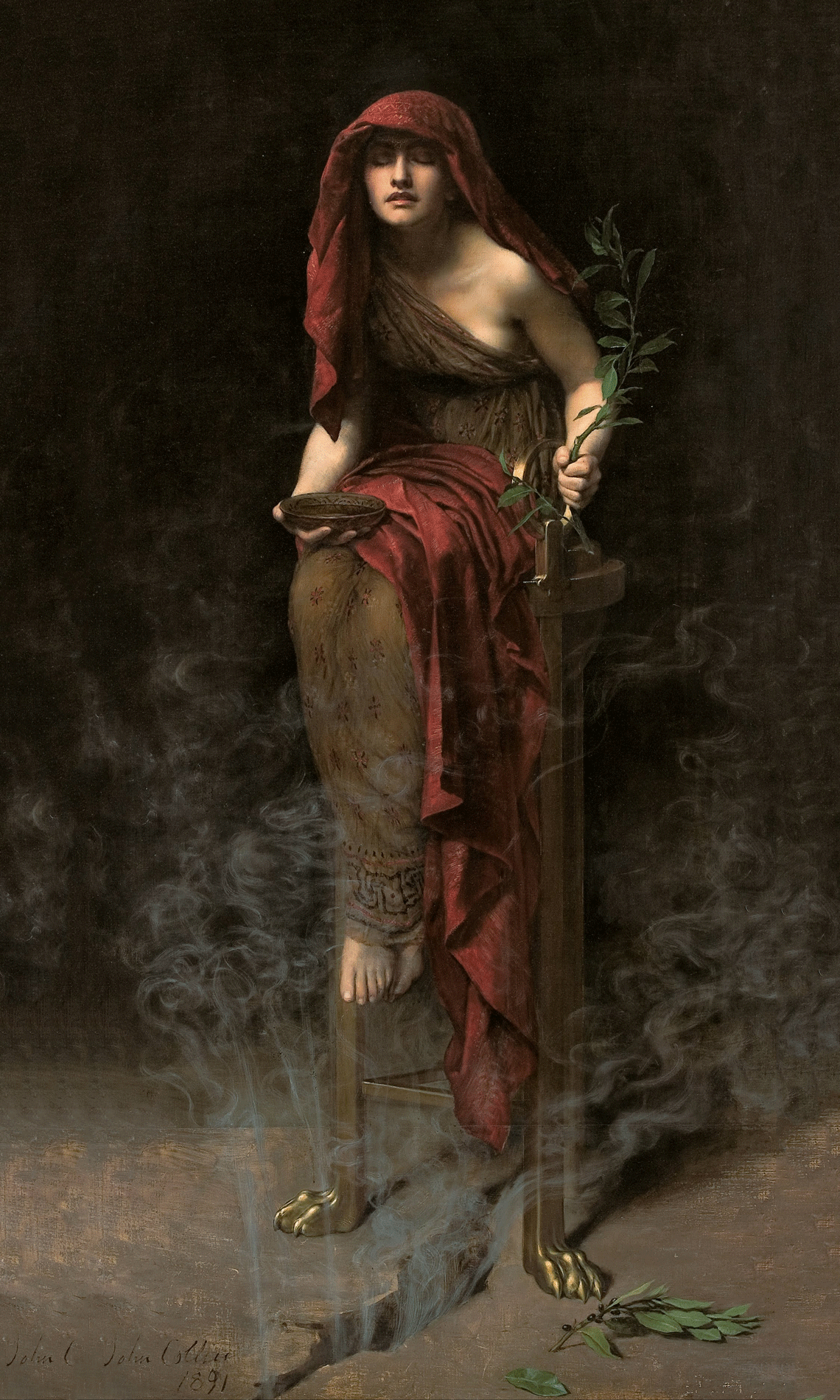 In the ancient city of Delphi, in Greece, was a sanctuary of Apollo. A prophetess told the future there, inspired by the god. And conditioned by the psychotropic emanations which rose towards it through a slit in the ground, as can be seen in the image. On the lower level, a mixture of narcotic drugs, presumably cannabis and opium, was burned, like the Indian mixture called Black Bombay.

Apollo was a visionary. He saw the future. Her divinatory talents complemented those of her priestess, who was called Pythia. Pilgrims came from all over Greece to hear its oracles. The sanctuary of Apollo at Delphi was one of the most famous in the Mediterranean.

Long before the Pythia and the oracle of the god, Apollo exercised his talents as a healer and let’s say, as a magician. Through the grace of his magic lyre and his mastery of tunes and rhythms, the magician god set off a musical trance to shift the assembly point of all the audience. On this point Nietzsche was mistaken. There is a true trance master in the person of Apollo. The Apollonian, therefore, is tinged with Dionysian. Or rather Apollo and Dionysus appear as two sides of the same coin.

The magic lyre realigns the external chakras and repairs the internal healer who helps to cure illnesses, correct imbalances and protect the subject against any new attack. The inner healer is the other name for an ultra-efficient immune system, which we should all have. This is how Apollo Healer was emulated by the two most famous doctors of Greek antiquity: Aesculapius and Hippocrates.

However, the influence of Apollo healer extended far beyond the Mediterranean. The Celtic and Norman Druid healers owe much to the Greek god. Besides, was Apollo Greek? If we believe his legend, he came from Hyperborea like all the former gods. He was of extraterrestrial origin, at least through his father.

Apollo is a master of the third ear. Sonology specialists know how crucial the opening of the third ear is on the inner path. Certain sounds and rhythms modify DNA. They give longevity and youth. They can change the physical appearance and gender. They lead to the increase of powers by the exaltation of the senses. Man, increase your needs … 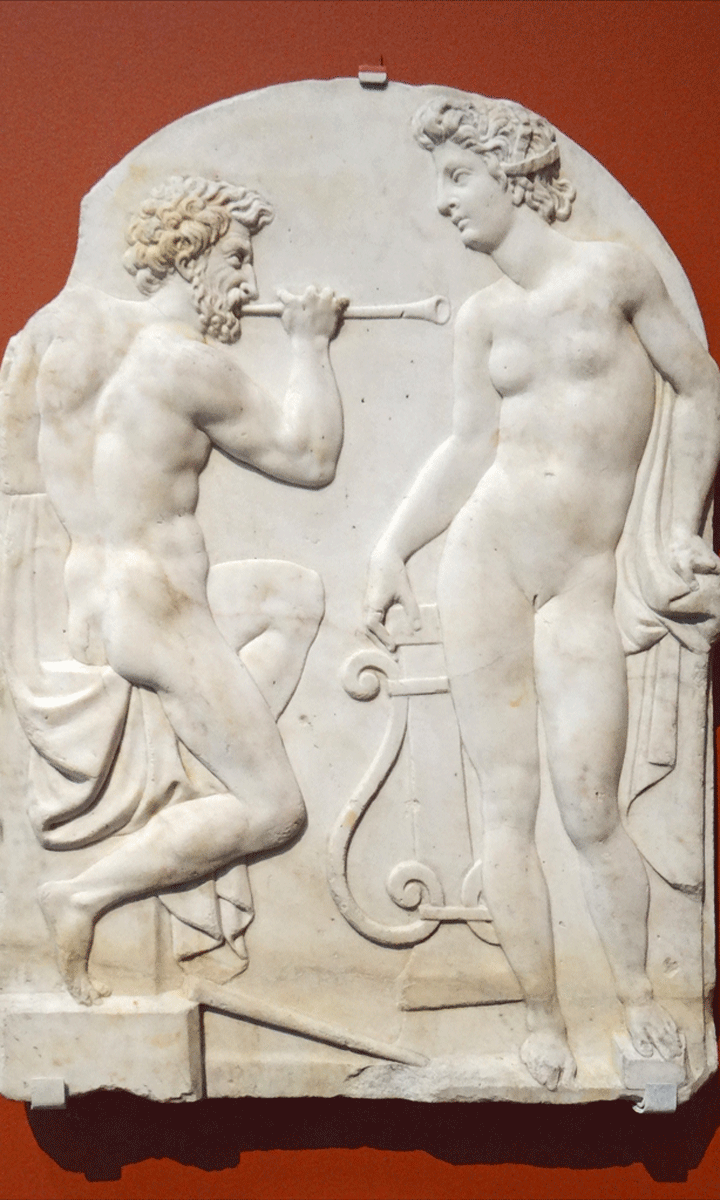 Speaking of changing the gender, just have a look. In this bas-relief, Apollo is represented in a female form, which is rare. But it exists. It seems that Lord Apollo was able to change sex at will.

The thing is not unique. It is cited by Castaneda as being part of the magic know-how of the ancient seers. This change of sex allowed them to make love with this or that nagual for energetic reasons.

We know that the gods before were transformist. They could change their appearance, size and gender as easily as you change their shirts. When the desire was felt, they did not hesitate to transform themselves for their good pleasure.

Contemplating this bas-relief, I have the impression that Apollinette is dying to be bitten by Marsyas, whose erected flute leaves no doubt as to the intentions. Besides, see his left knee erect towards the kid. Isn’t it ithyphallic? 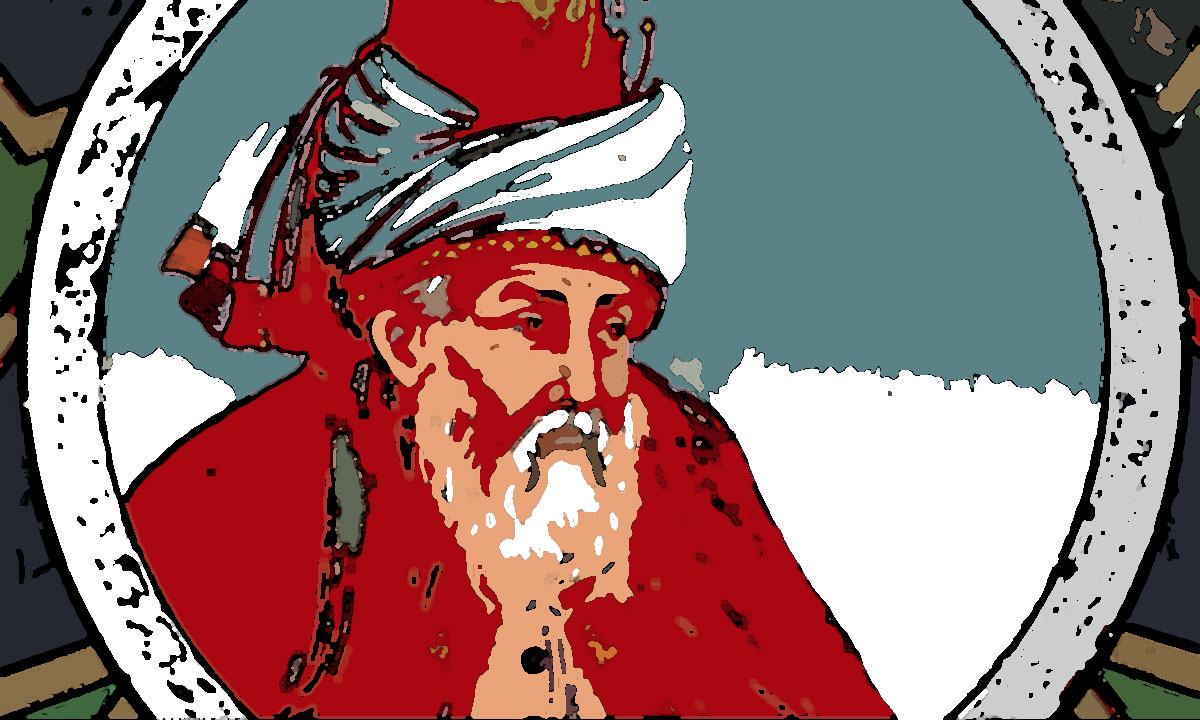