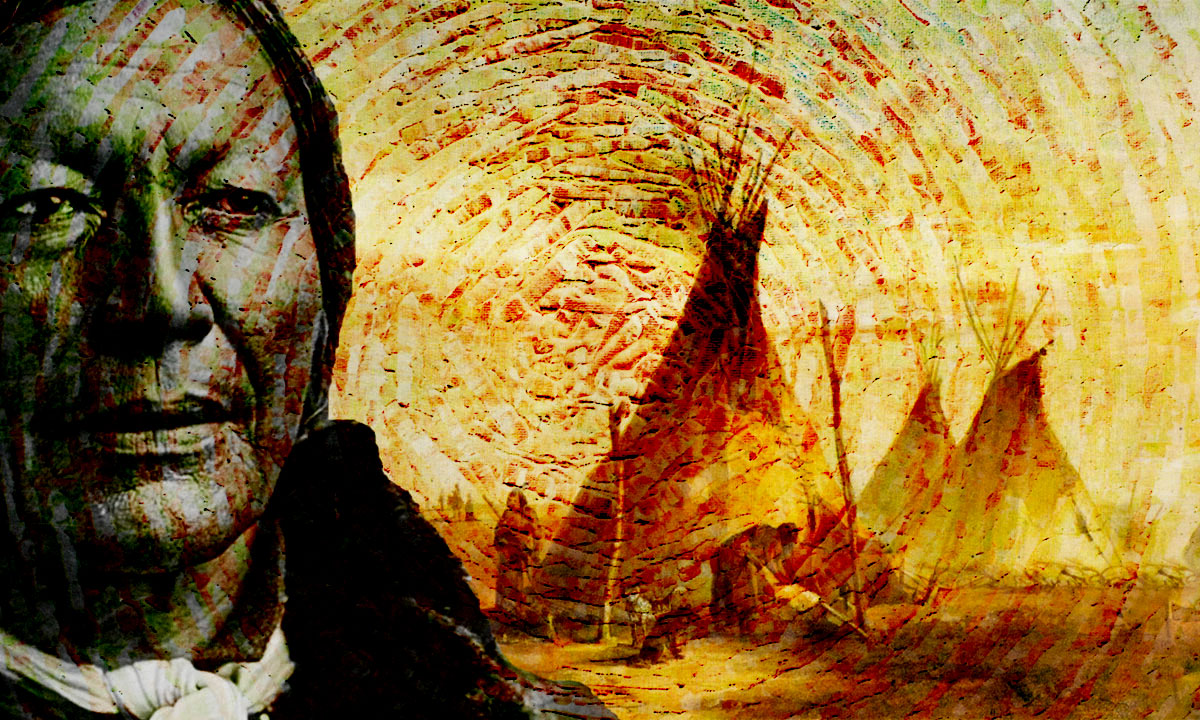 The fate of the American Indians announced the fate of all the inhabitants of the planet who watch helplessly the destruction of their environment, after the confiscation of their space and resources. The message of the Indians is also a source of wisdom, based on respect for nature and understanding of “the Spirit who is in all things”  (source)

“We see the hand of the Great Spirit in almost everything: the sun, the moon, the trees, the wind and the mountains; sometimes we approach it through them. We believe in the Supreme Being, with a faith much stronger than that of many whites who treated us of pagans… The Indians living close to nature and to the Master of nature do not live in the dark. Did you know that trees talk? They do however! They talk to each other and will talk to you if you listen. The problem with the whites is that they do not listen! They never listened to the Indians, I guess they will not listen either to the other voices of nature. However, trees taught me a lot… sometimes on time, on animals, and sometimes on the Great Spirit.” (Source)Tatanka Mani or Walking Buffalo, Stoney Indian, Canada

It was believed that monotheism was a great spiritual progress compared to ancient religions, said polytheistic or animist. There is in this opinion an issue not resolved: what does polytheism really mean?

Or more radically, the absolute monotheism does it exist? Thus, in the Jewish religion, which is supposed to be the first monotheistic religion, there are from the origin troubling contradictions: God the Father had a wife, and worse than that, the only God was several! In Genesis, He is called the Elohim, they are seven, each with his wife, it looks like anything but a unique God. The Torah has no less than seven ways of naming the only God: the seven Elohim?

In Christianity, another monotheistic religion, there is from the beginning a hiatus of the same order: the only God exists in three persons. Make up your mind! Is 1 = 7 or 1 = 3? A perfect God who can not count, that looks bad. Makes you wonder if monotheism exists… This whole affair, once again, is based on a major misunderstanding: our ancestors took a band of usurpers for the One. The usurpers in question have thereto strongly encouraged them. And we swallowed hook, line and sinker. 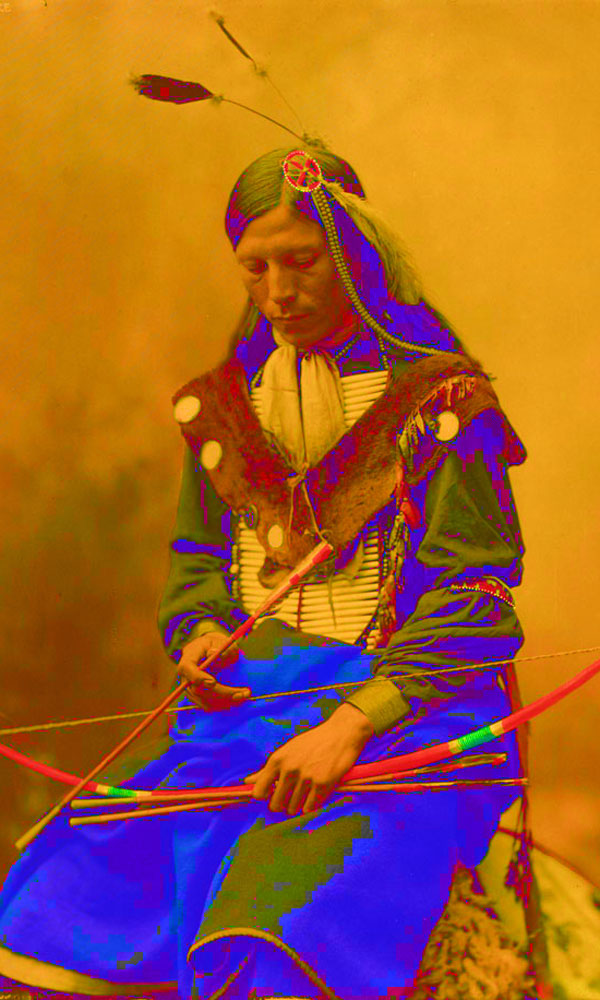 The orgasm of Shiva

As for the different polytheisms, they rely on a complex vision of the deity, single most often, but at the top of a pyramid of sub-gods which make believe in idolatry. Yet among these believers, we find the same faith in a god within, both unique and universal. Thus the herd of gods, devas, semi-gods and divine heroes of the Hindu pantheon does not hide the Dravidian primitive source which affirms the uniqueness of Shiva, the creator of everything.

Shiva is an unconscious principle, united with his creation without worrying about it and yet dictating its fate. Shiva dances, and from his dance worlds are born. In ecstasy he ejaculates all universes. As soon as Shiva no longer comes, everything will stop. It is a perfect image of the Great Spirit, both all-powerful and impersonal. In practice in India, according to the view that the believer has on Shiva, as he is shivaist or ramanite, he will sometimes see His destructive capacity, sometimes the original vital breath.

We find the same phenomenon in the polytheism of Native Americans.  If the red man sees the divine presence in every living being, even in every stone, every stream or every cloud, this is his way of worshiping a One so powerful that we can perceive Him only through His creatures, like Shiva for Hindus. Love Life, the Spirit and the Energy in all their manifestations, is it primitive? Native Americans, like other people said primary, grew a close contact, carnal, with mother nature. It is from her they drew and they still draw their most valuable lessons.

“Oh Great Spirit, whose voice I hear in the wind and whose breath I see in the mists of the Levant. Come, Spirit of Good… Come now, with the rising sun. Oh, shield of light… Fill my eyes! Long time I cried. Long time I launched to thee the arrows of my prayer. Send your Spirit of Good to reveal to me the mysteries you have hidden in every leaf, every stone, every flower, every living creature. Come Spirit of Good! Oh, Spirit of Good, come!” (source)prayer of the Sioux Chief Yellow Lark, 1887

In view of this wonderful religion, obvious, so simple that “even children can understand it”, our religions often intolerant show an unnecessary complication. Our desire to convert them shows a shocking smugness. We say: Do as I say, not as I do. They reply: “Brother, you say there is only one way to worship and serve the Great Spirit. If there is only one religion, why is the White people so divided about this?

We know that your religion is written in a book. Why do not you all agree, if you can all read this book? Brother, we do not understand these things. You tell us that your religion was given to your ancestors and has been handed down from father to son. We also have a religion that our ancestors have received and transmitted to us, their children. We give worship this way. It teaches us to be grateful for all the favors we receive, to love each other and be united. We do not ever quarrel about religion because it is an issue that concerns every man before the Great Spirit.” (Source)Sa-go-ye-wat-ha, Senoca Chief

Mitakuye oyasin! May Wakan Tanka the Great Spirit bless you! 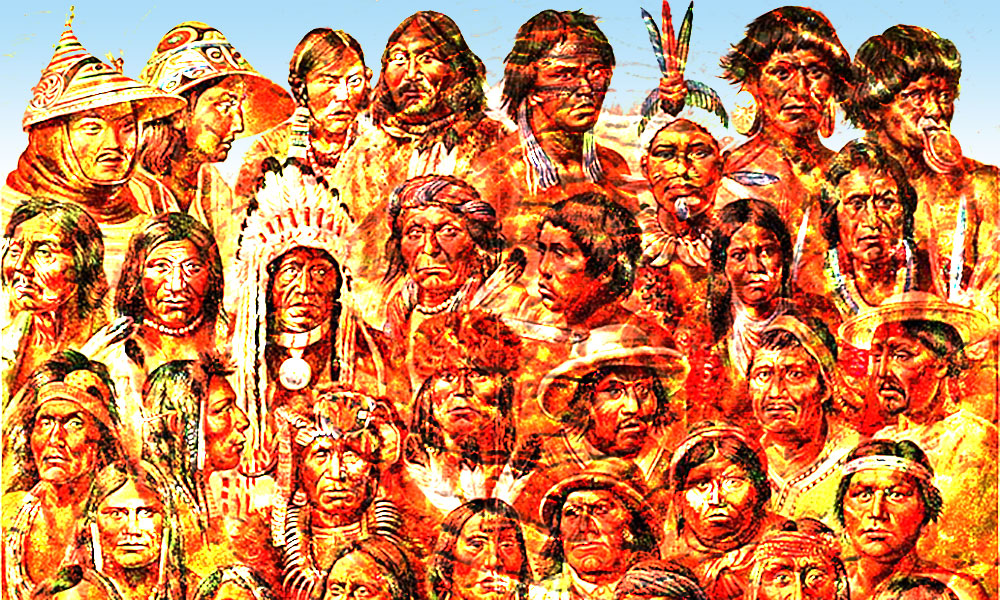 Observe the different types of native Americans as the first white settlers discovered them. You will recognize all the human lines, from the Asian at the top left to the “plateau nigger” at the top right. Do you know why? It’s very simple. It’s a forgotten episode, prior to the historical period. A deadly nuclear war had ravaged North America, which for a long time remained an unlivable land, too polluted, terribly radioactive.

Long after, this deserted land offered a haven of peace to all those who wanted to get closer to nature. On the other continents, they deserted the cities and their industrial pollution and had only one desire: to protect themselves from the bloody conflicts that tore apart the developed countries. As soon as survival became possible, these desolate lands were gradually populated by all free men, eager to remain so. In the great plains and in the mountains, they found the dream life, impossible in their original lands.

This is why we can find, within the same tribe, very different human types. The Amerindians are not native Americans, but settlers, like the pilgrim fathers. The oldest settlement in North America, at least as far as our humanity is concerned, fifth of the name: it is the blacks.

They lived here in the North and South Americas for many generations before the Nicerian conflict broke out. Some survived. The first white settlers and the Conquistadores were able to discover villages and towns populated by blacks who had been established there since time immemorial.

These blacks were called Marranes or Marrounes. They were distant descendants of the very first humans, created by the Gods before to work in the mines of Africa. The colonists baptized them brown negroes, and later it was thought that these Marouns or Maroons were slaves escaped from the plantations. This is totally false. (source)Pathé Diagne, TARANA l’Amérique précolombienne, un continent africain

In his well-researched and well-sourced large book, Pathé Diagne explains that the American continent has always been known by African elites. Five centuries before our era, Plato, in the Timaeus, questions a Nubian priest about Atlantis. The latter “underlines the ignorance of the young Greece that emerges in the great History. He did not hide the existence of the lands of the other Atlantic explored, put on maps by a completely exceptional digital navigation, and whose know-how was to be lost for two thousand years.

Egypt in decline no longer goes there at the time. Néchao, who toured the continent in the 6th century BCE, before the common era, does not provide more than his successors the keys to a transatlantic navigation which the West African empire will keep secret, even after the journey of Bakari II in 1312.” (source)Pathé Diagne, TARANA l’Amérique précolombienne, un continent africain p.167

These are forgotten facts. Thank you to Pathé Diagne, an academic from Africa and the United States, for bringing us her insights. Isn’t he in the best position to do so? When you put your name under the microscope of the language of goslings, what do you find? Pathé = Ptah, the only one. Diagne = dia gnosis. Pathé Diagne is the Unique through gnosis. 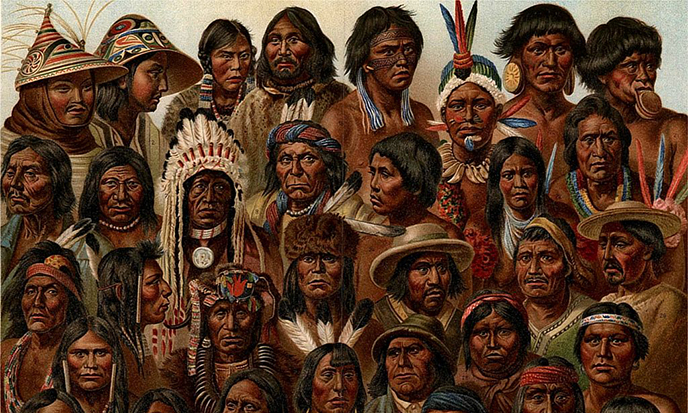