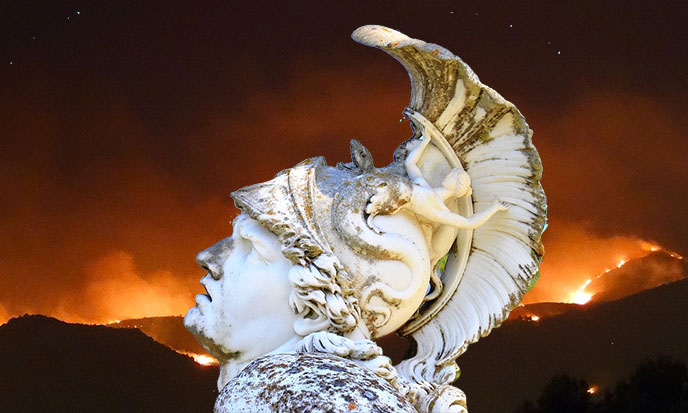 In the Greek mythology, Phaeton is son of Apollo, who is Son of the Sun. One day Phaeton begged his father to let him lead the chariot of the Sun. Apollo gave in and it was a disaster.

Ovid told us Phaeton’s road leaving, when the Sun has burned the Earth:

“The Earth firstly catches fire in its hills; the heat opens them, and dries up the juices that feed the plants. The dry meadows whiten, the trees burn with their leaves… The cities perish with their walls; the fire consumes and burns forests and mountains, nations and peoples… Lybia, losing all its moisture, becomes a barren land … The Don fumes in the middle of its waves; the Euphrates burns in Babylon, the Ganges, the Phase and the Danube boil; the banks of Sperchios are in flames.

The golden sands of Tagus melt under the heat, and the swans burn.

The Nile, terrified, runs away to the ends of the world… Its seven dry mouths form deep valleys where water no longer flows. The Earth opens up on all sides… The sea shrinks, and what was once the bottom of the ocean becomes nothing more than a plain of arid sands. Mountains previously hidden inside suddenly appear, and increase the number of the Cyclades.” (source)Ovid, Metamorphoses

We can object that Ovid is a poetme too, so what?. The episode he tells us is just a myth, and myth is not history. Except that Plato will show us it is: to the great philosopher, a myth is “the echo of a real event”.

Although this myth will acknowledge historical facts as countless furnaces do have ravaged the planet, the title Son of the Sun is a title too, and it is possible that Phaeton is one of the Sun insiders, since his father Lugh / Apollo himself had received this initiation. Now back to the earth on fire. 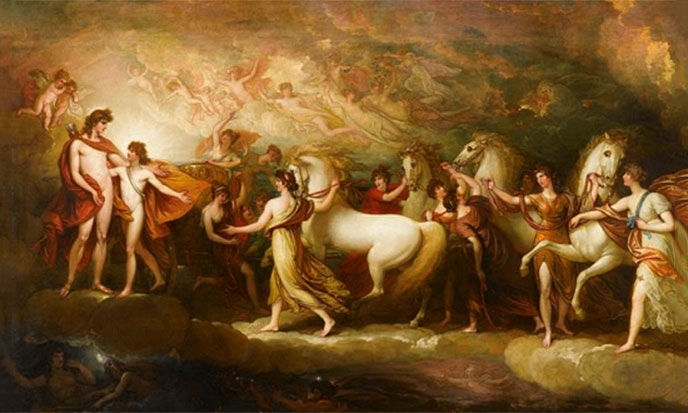 This episode seems to describe a singular astral disaster, the passing of a comet or a meteor impact. It can evoke a different kind of global catastrophe of human origin, as a general nuclear war. Apollo as the Son of the Sun, was started by lightning and therefore had full powers, which apparently was not the case of his son Phaeton.

Should we understand that those who came after the Son of the Sun caused a world war that lined the gods before the world of the living? Is this how we should interpret the last ice age, the Würm / Wisconsin, which lasted no less than a hundred thousand years? Famous nuclear winter, in this case!

We were lied a lot, mostly by ignorance. Students are too gullible and teachers, too naive — while blindfolded researchers are groping at random. Who doesn’t know what to seek doesn’t know where to look, and is not likely to find.

Formerly in Egypt, a priest said to Solon: “Your country, like ours, tells the story of Phaeton, son of the Sun, who harnessed his father’s chariot, but could not keep it in its usual way, and burned therefore everything on Earth and perished himself struck by lightning. This story looks like a legend, but it is in fact the echo of a real event: the overthrow of the celestial bodies that revolve around the Earth and the destruction of earthly things by a wild fire which occured within long intervals of time.” (source)Plato, Dialogues 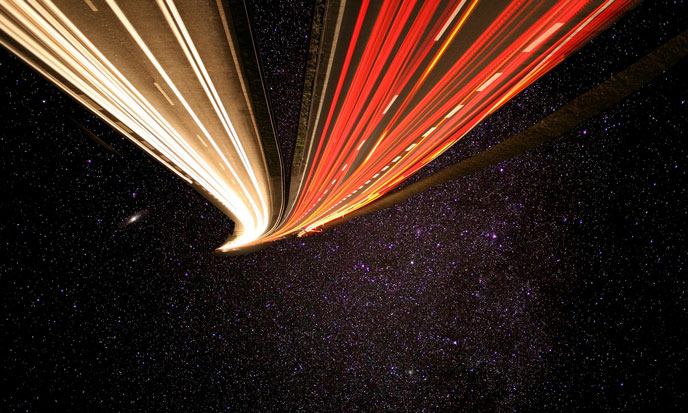 An Arrow of Fire in the Sky

The world’s blazing-up is a constant motif in all myths. In the Bible, Psalm 105 evokes ‘a river of fire’ and the Book of Daniel, ‘a blazing torrent’.

Other passages suggest a general blazing that would have occured in a distant past: the Gehenna of fire, the flames of Hell, consuming the whole Earth, maybe the original myth of the Burning Bush.

The Aztecs believed that one of the past ages of humankind, also called Sun, ended with a total furnace.

“At that time, everything was destroyed by a rain of fire falling from the sky and a flood of lava. All houses were burned. The men were turned into birds to survive the disaster.”

According to the Indians from the Pacific coast of North America, ‘the shooting star’ and ‘the arrow of fire’ lit the fire on the Earth: “We could only see a sea of flames; the rocks burned, the ground burned, everything was burning; the smoke rose in columns, in huge curls; the flames, with jets of sparks, rose towards the glowing sky.

The big fire was raging, burning rocks, land, trees, people, burning everything. Then the water rushed, it rushed like a thousand rivers, covered the Earth and extinguished the fire by flowing towards the South. It was raising to the height of mountains.”

The Chinese mythology makes the same description: “During the reign of Yao, they say, occured a miracle: for ten days, the sun did not lie down, the forests burned and the whole country was flooded.” A huge wave, “which rose to heaven”, descended to the Chinese land. “The waters rushed to the assault on high mountains, and the hills were invisible.”

It reminds of the BiblePsalms 104 and 107, cited by Velikovsky: “The waters covered the mountains”, and “waves of the sea raised to heaven.”

A huge hurlyburly, nothing looks like what it was anymore. We put dead men at the table. Fenrir the Wolf was taken for a dog. The world sees the return of the chaos: it is the end of cosmic order.

Is this how people live? And their kisses follow them as far as removed suns

It is also possible that Phaeton actually led the chariot of the Sun, the enormous mother-ship piloted by Apollo, entrusted to the inexpert hands of a neophyte!
The Atlantis ship was about the size of the moon. But much flatter. With its 3300 km diameter, it occupied most of North Atlantic Ocean. His commanding officer, young Atlas, made a mistake in piloting the enormous craft off the Atlantic Ocean, producing an appalling tsunami four kilometers high.
The Hyperborean mothership was much bigger, a size comparable to our planet. It shone stronger than the sun, which explains the Chinese tradition of the sun that does not set for several days in a row. This sun with the brilliance of a thousand suns is also at the origin of the Egyptian legend of the sun that rises to the west and sets in the east.
Imagine that Phaeton wanted to pilot this mother ship. At the helm of Hyperborea, the mother ship with its four continents, Phaeton panicked, and a gigantic electric arc connected the ship to the Earth, awakening volcanoes, causing earthquakes, faults, landslides and all sorts of convulsions.