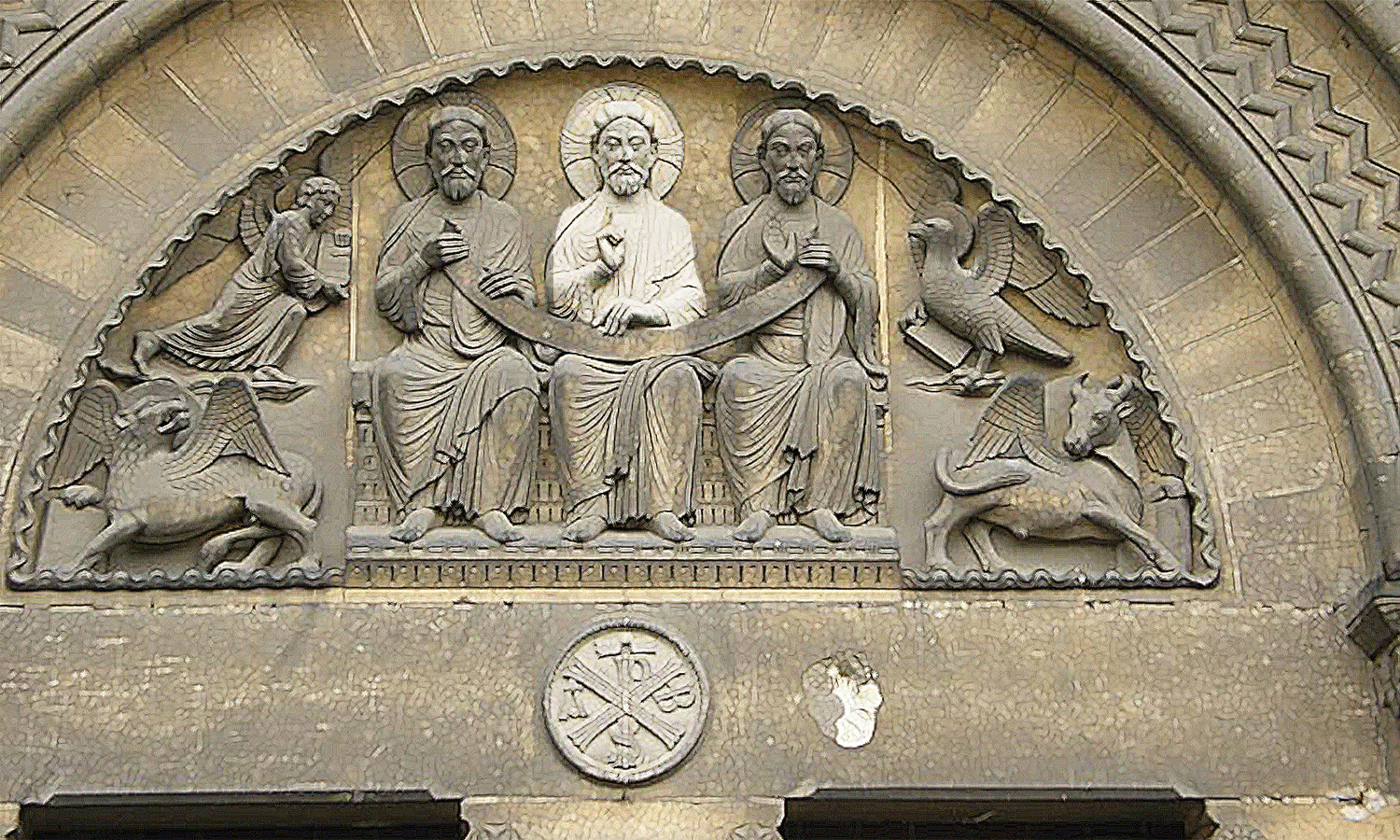 Passionate reader, AG wanted to see me. I was going to say yes, but to my surprise I replied: It’s too early. You are still missing something. I don’t know what prompted me to refuse, but it was decisive. Shortly after, I receive the following email. (xs)

The bird on the roof

After your previous email, I continued my in-depth readings, determined to bring about this “something” that you were talking about and that I felt. Incredible synchronicities followed on your site, like a treasure hunt, one thing led to another, more than once I almost wrote to you but I told myself that it was not yet sufficient. 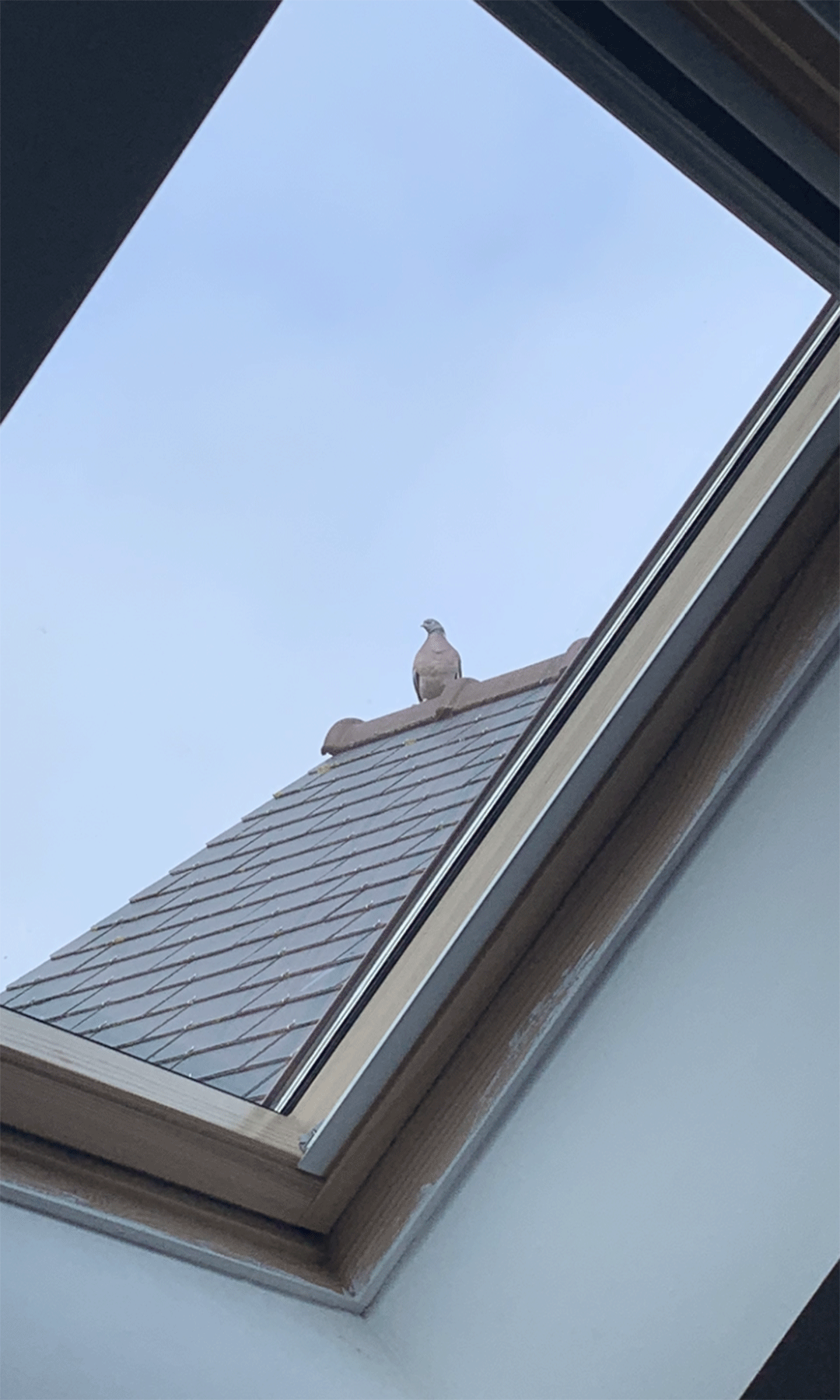 I felt the favorable wind yesterday, I began to “see“. I read between the lines of your articles, no longer just the stories and the words but their hidden meaning – The Goddess and Enoch, Isis and Idris, Viviane and Merlin … Likewise for the images whose real meaning I understood, like two which helped me a lot: the Accoladesee further and the tympanum of the Abbey of Caensee above and finally the metalinguistics with the language of the goslings. Everything was becoming incredibly clear.

Another sign seemed favorable to me, a bird landed on the end of my roof, within sight of my bed where I was located. He stared straight in my direction several times, which struck me as odd. I stared at it for a long time, I closed my eyes for a few seconds and when I opened them again it was gone. I was able to take a picture of it before.

I continued my reading work then around 3pm I felt a surge of energy and I decided to take the opportunity to meditate – I have been practicing meditation every day for a little over 5 years.

Time is speeding up

For information, what follows lasted 1h30 and seemed to me 5 minutes.

At first the meditation was pretty normal, then I felt the Light intensify and brighten my eyes more and more. At that moment, I don’t know why, the idea of ​​the Chakras came to me. For a while, I felt a big lump in my stomach and I said to myself it is probably a blockage, now is the time to unblock it.

So I focused on making this ball of energy go up to the heart chakra and once there, I thought of my arcane The Lover. I thought about the person I was in a relationship with at the time of The Lover and the tornado of positive feelings I was experiencing by his side. Very strong energy spread from the heart throughout the body.

I had nothing at the level of the throat, the energy rose directly to the level of the forehead. At this level, I felt a strong build-up on my forehead. It was very heavy, very heavy, very intense. It went on for a while then I pushed it up to the top of my head and it piled up in circles, flat like a kippah. It was very warm, brightly colored, then visually I rubbed this round of energy in a circular fashion.

I then wanted to pierce this top of the head, to bring out the energy, so I imagined a halo above the head to welcome the energy. It worked, the energy transferred from the top of the skull to the halo, where I could feel it spinning around in the halo, very vividly again and I felt very light. 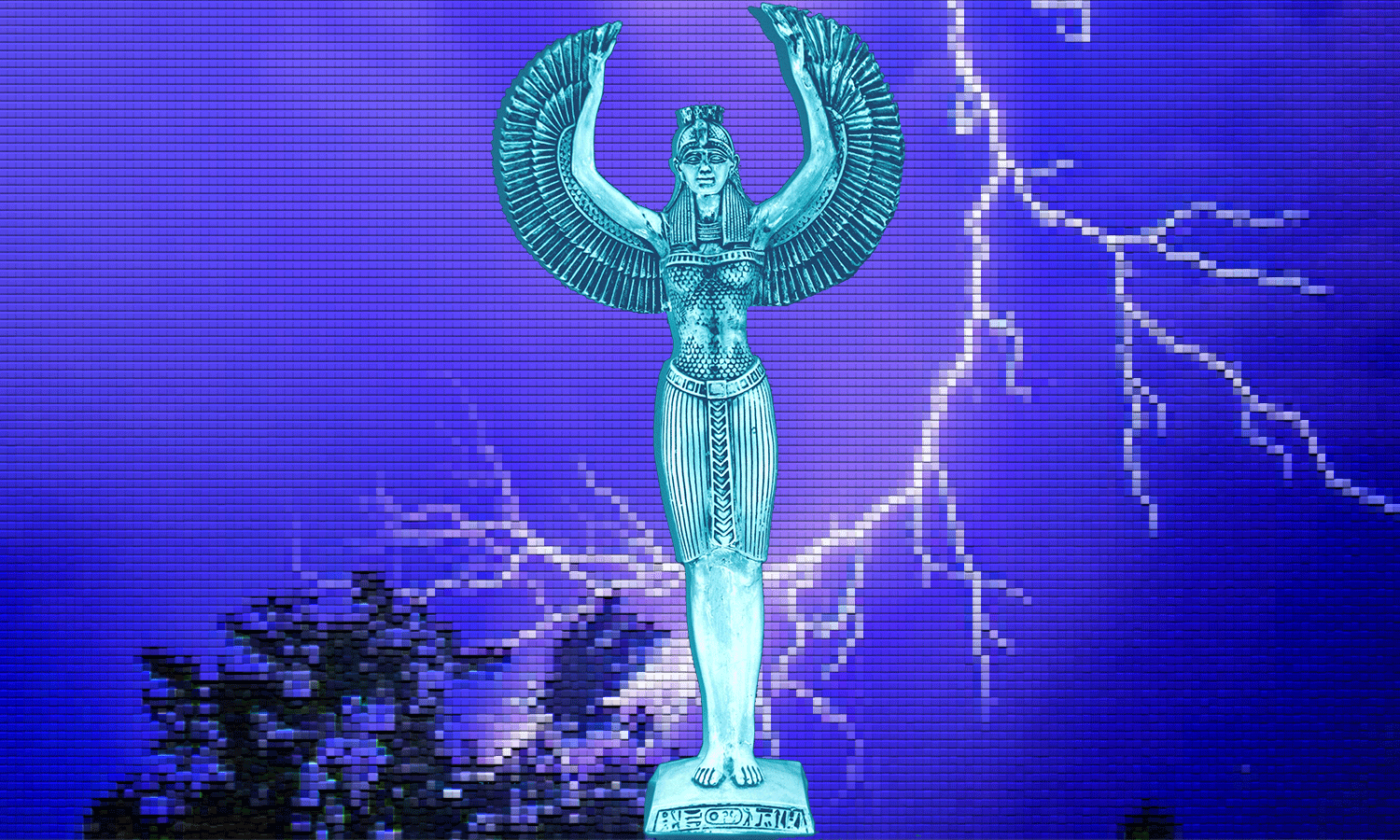 Then there was like a connection with the sky. From the halo, many others came out and ascended into the sky, continuously and forming like a tube. The RAMA mantra came to me – RA (Heaven) MA (Earth), and applied it in the RA-MA two-step inhale-exhale breath. It was nice but I had the feeling that the mantra had a direction towards the ground, the Earth, and that it was not lifting me. 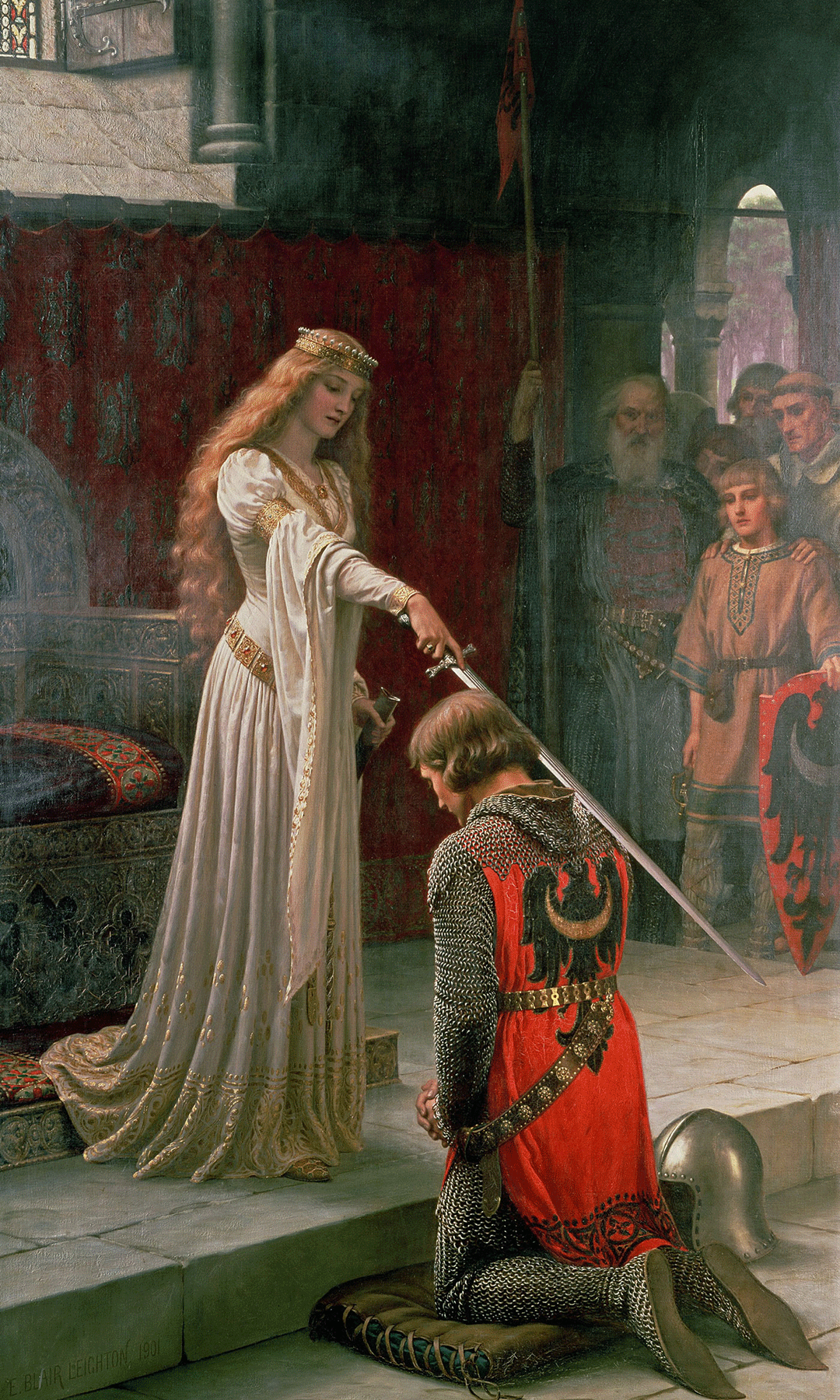 Then a new mantra came to me AMOURLOVE (SOUL UR). It seemed less relevant to me than RAMA and I didn’t even know that it could be a mantra but I tried, in two stages also AM-OUR. I inhaled on AM, exhaled on OUR. I felt that unlike RAMA, he was in the direction of Heaven. I repeated the process of breathing, repeated over and over, and then suddenly it all came to me, and I got it.

AMESOUL (Isis, Light, Mother, Earth) – OUR (Ur / Or, Heaven, Creation, Father, Body, Hyperborea) whose fusion makes AMOURLOVE. As if our Soul Light below joined the Sky of Our, to become a third and new entity: AMOURLOVE. Now what is not Three, nor Two, but One: Love, itself.

During the same process, an image appeared to me: a simple ocean and a sky. Then the image turned upside down, with the sky below and the ocean above, as if it had been turned upside down. I thought to myself “uh interesting”. Then it started to spin, spinning faster and faster until it all mixed up and I could only see a black dot in the middle.

And a second image appeared to me, an equal cross, a “+” where I saw the “I” Sky and the “-” the Earth, and in the middle, at the crossroads, a luminous point, ” Me “- Love. Without a past, without a future, only here and now, between Heaven and Earth.

I was overwhelmed by this Love and saw it fill an entire room. Not the love that I knew before, the word, but as a new energy, a fusion of Soul and OUR. Of the Two I made One. It’s an incredible feeling, both Fullness and Total Emptiness. Beginning and End, and vice versa. A perfect fine point. And a lightness.

There you have it, that makes a lot of details, excuse me, but you were right, I can only talk to you about it! And to my readers, thank you for your permission I wrote everything down immediately, I kindly digest all that yesterday and write to you today. And I tell myself that since you do an immense job to awaken, it may interest you to have a feedback when it happens and how. 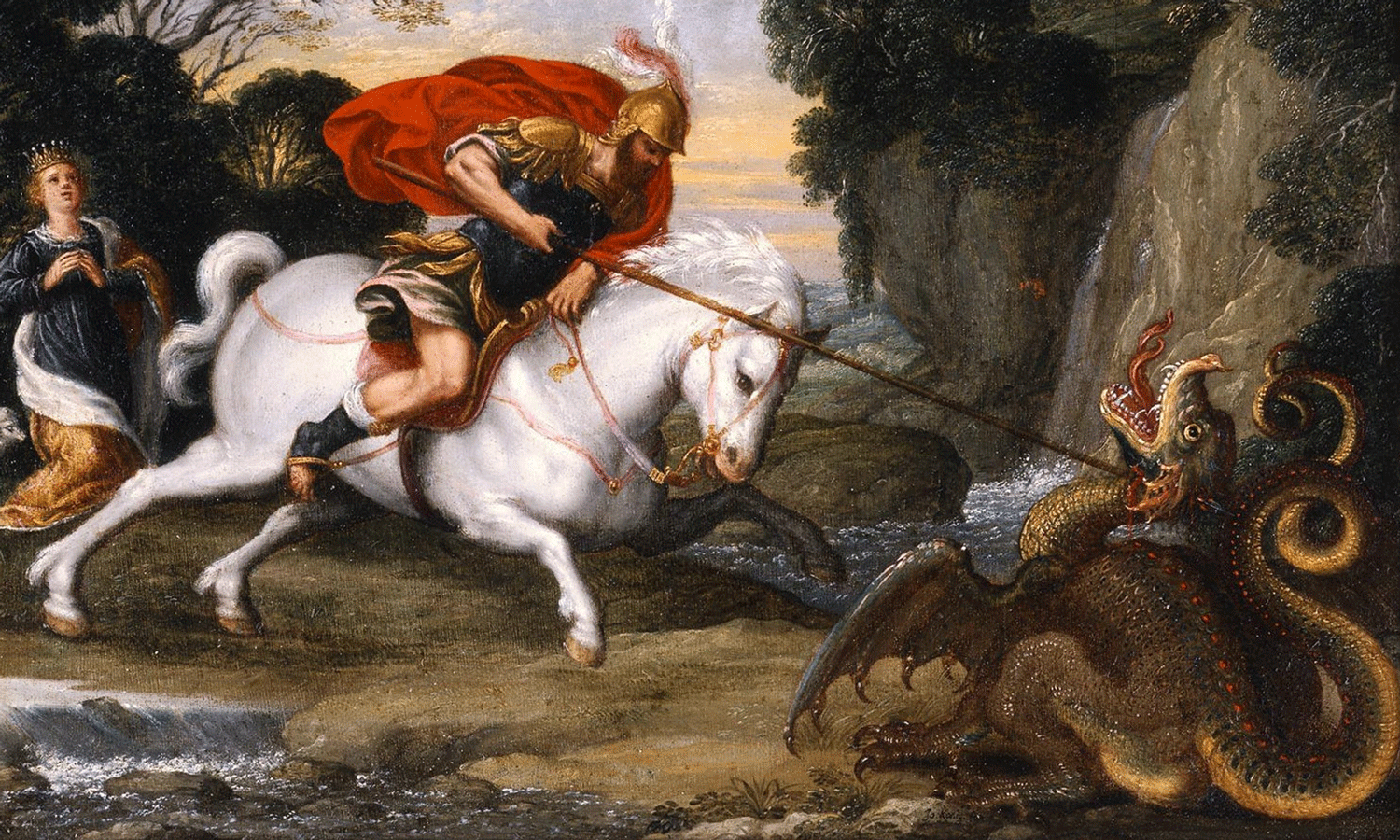 Another strange feeling, I don’t feel awake. I now feel like it’s a vague word, I just feel different, like on a 3D plane, in relief. I have just spent more than 5 years in this quest for awakening which has brought me through 10 countries and since yesterday afternoon 4:30 pm and until this moment, dead calm. I no longer seek this “awakening” but I do not consider myself awake either, perhaps this is precisely awakening? Just “Being” and where we no longer ask all these questions?

I think I was looking for a word, for matter, when in reality it is a state. A very subtle state, which is more apt to describe what is going on in me. Besides, I’m not trying to put a word on it or understand it either, I just am.

In any case, as you know so well, it is an incredible state and I could never thank you enough Xavier, even from the bottom of my heart. I renew it to you, you have my eternal gratitude.

Now it remains for me not to become a silly Buddha as you so often say. I think I need your help in figuring out how to put this new energy to good use. If you can help me with that, that would be great! If you can’t, I would understand, you have already given me so much …

I allow myself to borrow you and engrave in me your expression “believe without believing in it“, so as not to go crazy. After such a message and its rereading, there would be something. “May Love always accompany you and may you always be surrounded by Love.“

Thank you from the heart,
AG 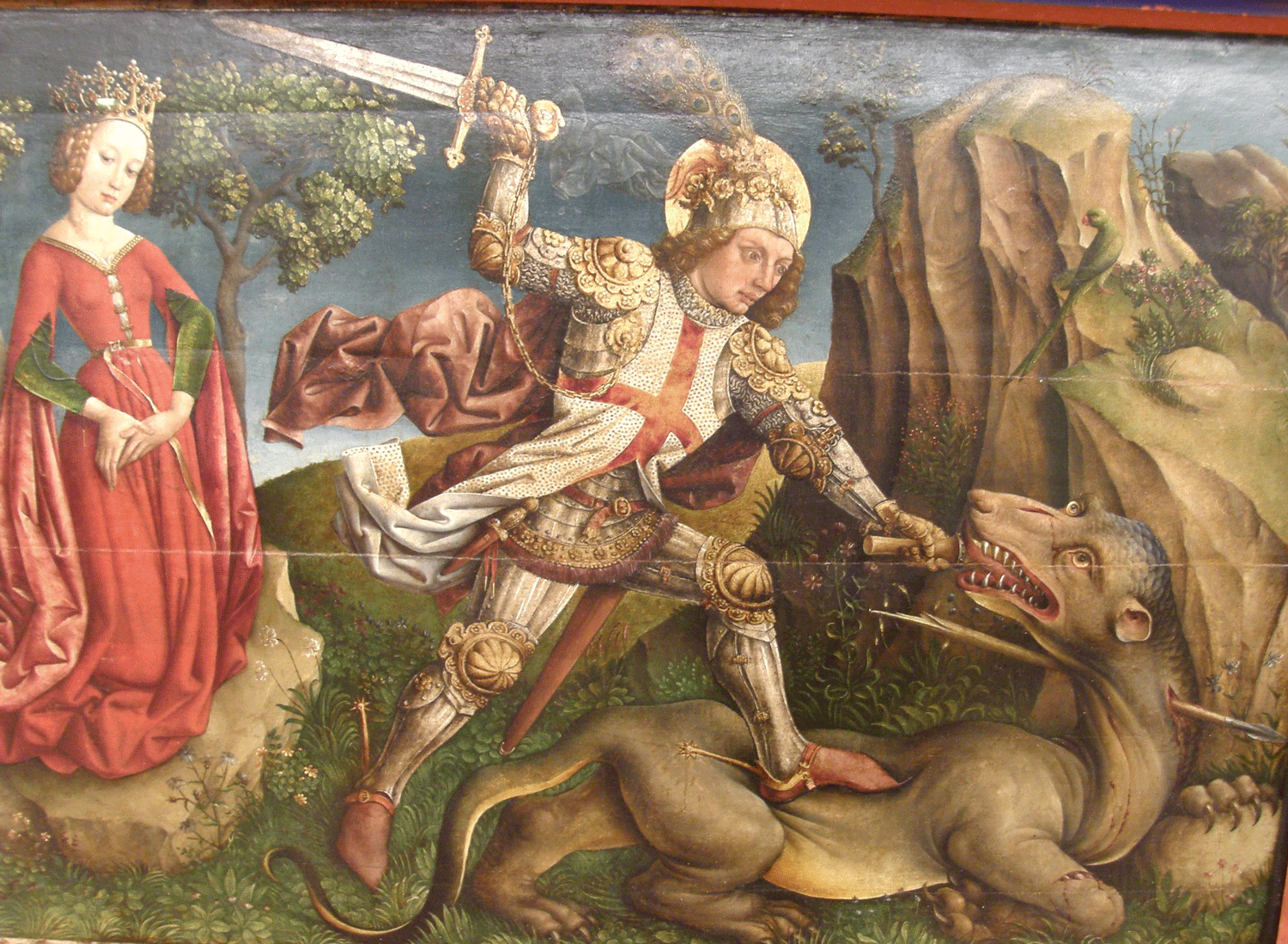 Of course I will help you my friend. Through my site, I have become your benefactor, I owe you help and assistance on the path that awaits you. Everything I know will be yours, try to make good use of it. You are the best gift that this site has given me, which nevertheless gave me so much. (xs)