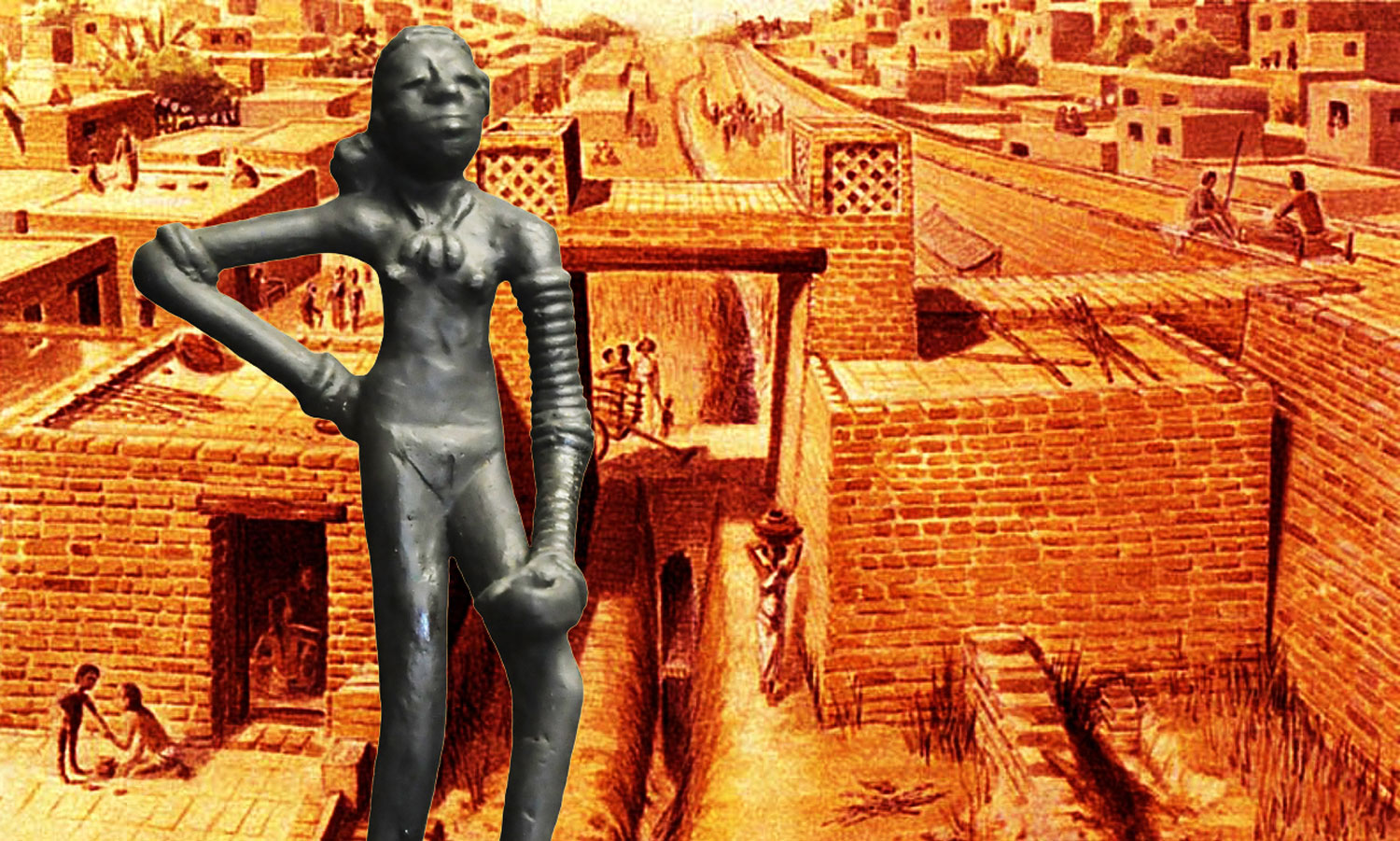 The Harappan culture had largely exceeded the borders of what is now Pakistan, it was center in Sindh and Punjab. The two greatest cities, Mohenjo-Daro and Harappa, emerged much later it seems, around -2600 along the Indus Valley, on the Indian and on the Pakistani shores. This civilization, knowing the writing, having some urban centers and a social and economic structure, was rediscovered in 1920 during excavations at Mohenjo-Daro in Sindh near Sukkur and Harappa, in western Punjab and southern Lahore.

Many sites, extending from North of the base of Himalaya to the East of Indian Punjab, up to Gujarat in South and East and to Baluchistan in the West, have also been discovered and studied. Although the archaeological site of Harappa was partially damaged, in 1857, by the engineers building the Lahore-Multan railroad, who used bricks from the ruins of Harappa as ballast.

It was not the first time, except perhaps on such a large scale. However, we found an abundance of artifacts. (source)Wikipedia  Jewelery of precious metal finely crafted, pottery, sculptures, all these objects show a great craftsmanship and a refined taste. Tools and utensils well designed confirm this feeling of development in Harappa and Mohenjo Daro.

“The two cities may have existed simultaneously and their sizes suggest that they served as capitals of their provinces. In contrast to other civilizations, burials found from these cities are not magnificent; they are more simplistic and contain few material goods. This evidence suggests that this civilization did not have social classes. Remains of palaces or temples in the cities have not been found. No hard evidence exists indicating military activity; it is likely that the Harappans were a peaceful civilization.

The cities did contain fortifications and the people used copper and bronze knives, spears, and arrowheads. The Harappan civilization was mainly urban and mercantile. Inhabitants of the Indus valley traded with Mesopotamia, southern India, Afghanistan, and Persia for gold, silver, copper, and turquoise. The Mesopotamian model of irrigated agriculture was used to take advantage of the fertile grounds along the Indus River.

Earthlinks were built to control the river’s annual flooding. Crops grown included wheat, barley, peas, melons, and sesame. This civilization was the first to cultivate cotton for the production of cloth. Several animals were domesticated including the elephant which was used for its ivory.”  (source) 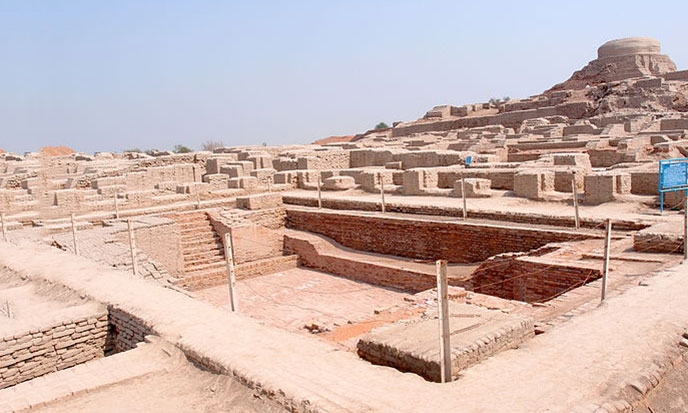 The strong radiation emanating from fossil corpses, at Mohenjo-Daro, forced the Indian government to close the site. Would have Rama’s Empire been destroyed by a nuke bomb?

As the pre-dynastic Egyptian civilization, this culture of Harappa remains an archaeological enigma. Very little is still known about this civilization of Indus. Its origins (-3000) and its decline (-1500) are mysterious, its language is unknown, and its writing indecipherable. No hint of temples, or religious buildings of any kind; thoroughly modern cities, a very high level of material comfort, a clear concern for health, no apparent difference in social class. No other civilization, not even Egypt or Mesopotamia, has shown such a degree of planning and development.

Except perhaps at the other end of the Earth, a people equally mysterious, the Olmecs. And the supermen of Teotihuacan. Besides also the remains of other civilizations in India …

At Mahabalipuram in southern India, a legend says that a city was submerged 10,000 years ago. However, just before the tsunami of 26th December 2004, the waters receded very far. And the inhabitants of the town have seen the emergence of the ruins of a temple and of a stone house, as well as an elephant and two giant lions carved in granite. Two years earlier, Graham Hancock had set up an underwater expedition revealing the presence of masonry and frame walls, dated from 6,000 to 10,000 years ago. As in the legend …

Talking about Indian legend, the one of the Bridge of Rama is worth reading.

There would be much to say about the Indus civilization, about Mahabalipuram and about all very ancient cities of the Indian subcontinent. But it would be wrong to believe that the Rama Empire is limited to the current Indian territories. Ramayana says that Prince Charming Rama has conquered all of Asia. Other traditions attest that his empire covered Tibet, China, Japan and Korea, as well as all the countries of the former Indochina and Southeast Asia.

Which makes a huge empire, but it is not over. Rama had kept his western possessions, which he managed and administered remotely, or where he went suddenly with his UFO, dubbed the Golden Fleece. It could go around the earth in moments. Of course, this information will not be found on Wikipedia. Yet it’s true …

“The contacts of the cities of the Indus with the ancient proto-historical or historical civilizations of Mesopotamia, Anatolia, Egypt and the Aegean Sea are important … There is evidence of contact with Sargon from Akkad (circa 2370 – 2284 BCE) and then with King Urnammu (circa 2100 BCE) but Mohenjo-Daro has existed long before. Objects from Mohenjo-Daro were found in Tel Asmar and Troy (circa 2300 BCE) as well in a royal tomb of Ur. Bronzes from Luristan and Mesopotamian weapons meet at Mohenjo Daro … The same glazed steatite necklaces meet at Harappa and Cnossos … Seals from the Indus meet to Ur in the lower Euphrates and to Kish, Susa, Lagash, Umma and Tell Asmar … A large number of steatite seals bearing inscriptions in Indus characters meet in Bahrain (Dilmun) but also in Ur (to 2350 BCE) and Lagash (Larsa period).” (source)Mortimer Wheeler, The Indus Civilizations, pp 111-115 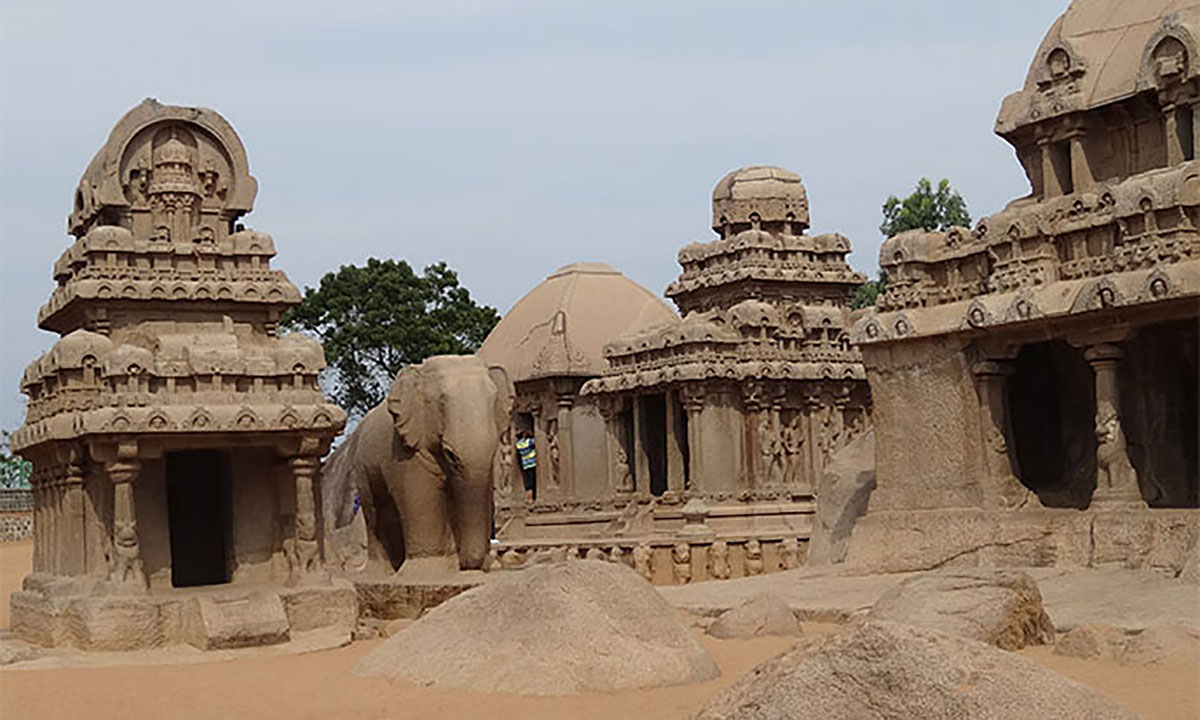 True Rama Empire was world size. Throughout Europe, the Mediterranean and throughout Asia laid his vast empire at the height of his reign – or that of his successors, who bore his name as a title, like Caesar or Augustus in Rome, as the kings Louis in France. With his brothers Enlil, Enki and Cuchulainn, Rama managed to unify the planet, who spoke only one language, and practiced only one religion, the religion — or rather the wisdom — of enlightenment.

Existence blows up every system.