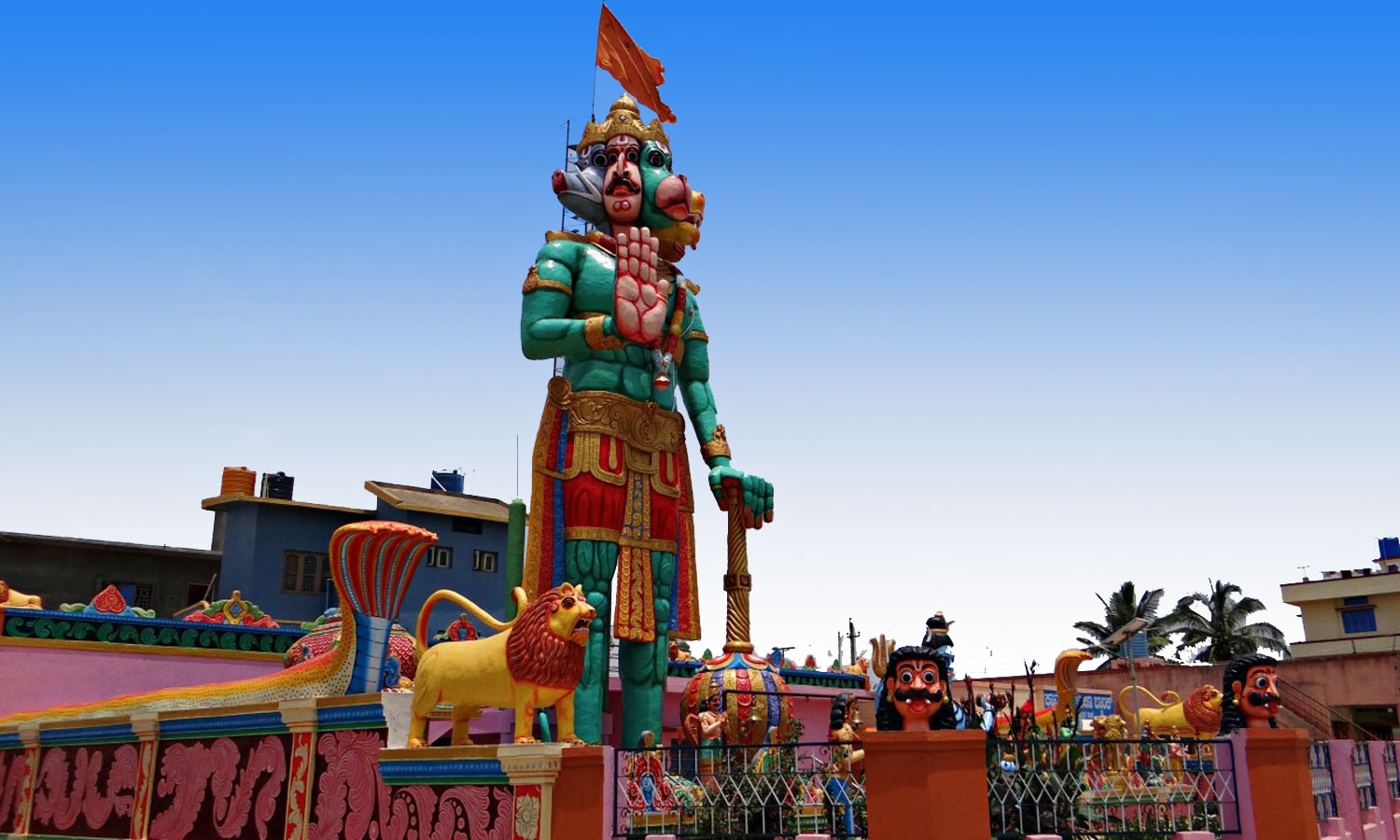 Listen my sweet friends the epic of the best of the monkeys, the strongest of the gods, Hanuman. This powerful monkey-headed god is one of the most popular of Hinduism. Tens of millions of Indians worship him, revere him and surround him with all their affection.

This is why monkeys are welcome in the towns and villages of India, where they mingle with the passers-by who feed them, before heading to their city, to the terraced roofs where they are at home. Up there, the monkeys argue, tumble down, go to bed and get rid of each other without a human being ever disturbing them. I will not tell you the vicissitudes of his legend, we find them everywhere, ask Google. My job, as you know, is to look for the doors in the hollow of the myth, and to open them all.

Merlin’s laughter is ringing in my ears. Viviane in the eyes of honey gets involved, she fairy beautiful. The words suitcases, the words masks, blessed are the so-called words. The images behind the words. The sounds make their song, the workman does his work. The other story appears, barely drawn from the mythic magma. To hunt down this story, I like to start from the official story, to uncover its lies, to laugh at its nonsense. And patiently, lovingly, take the time to greet the virtuous advent of the truth. It’s a beautiful game, I assure you. A game that lasts. There is nothing better.

The ancestor of humans

Hanumān (in Sanskrit “provided (man) with [strong] jaws (hanu)”) is in Hinduism a vanara, hero of the Rāmāyaṇa, an epic that tells the journey of Rama. Son of Pavana, the god of the wind, and the goddess Anjana, he has the appearance of a monkey. It is described as strong enough to raise mountains, kill demons, and compete with Garuda, Vishnu’s vehicle bird. In modern Hinduism, he is a very popular god in the villages. (source)

Hanuman would mean “who has strong jaws”. I emit a doubt. The etymologies are often amazing lucubrations that have no scientist but the name. In the legend of Hanuman, no exploit of the monkey god evokes the power of his jaws. There is, in my opinion, a misunderstanding in this passage of the legend, as it happens very often in the matter, because the legends were transmitted through the millennia, taken and commented by people who lost all notion of the Amazing technology of the silver age. The only allusion to his mandibles comes from a bitter failure, which fits very little with the archetype of the invincible monkey-god. Hanuman wants to catch the sun, but he falls down thunderstruck, broken jaws. In his childhood, the young Hanuman who was starving saw a big red fruit in the sky that was none other than the sun. He leaped to catch it but Indra intervened and hit him with his lightning. (source)

Since then, his jaws are distorted. Logically, after such an accident, they are not stronger, but more fragile on the contrary. Yet it is not called jaws twisted or broken mouth. So ? Nothing.

Farewell etymology that says nothing that is worth. Hello the wonderful language of the origins, dada Alain Aillet. Contagious pastime, I pricked the game Ahn is the ancestor. Human, the human being. Ahn Human therefore means the ancestor of man. We can decompose his name differently: Anu Man, the man of Anu, main god of the Anunnaki, the terraformers of Sumer. Whimsical, my trado? Less than many others. For Hindus, Adam is called Manu. He alone plays two biblical roles, that of Adam and Noah. Manu is the first man, the ancestor of the ancestors. His name is very close to Hanuman’s. So close that one wonders if it is not the same. Hanuman, Manu Ahn, the ancestor of men … 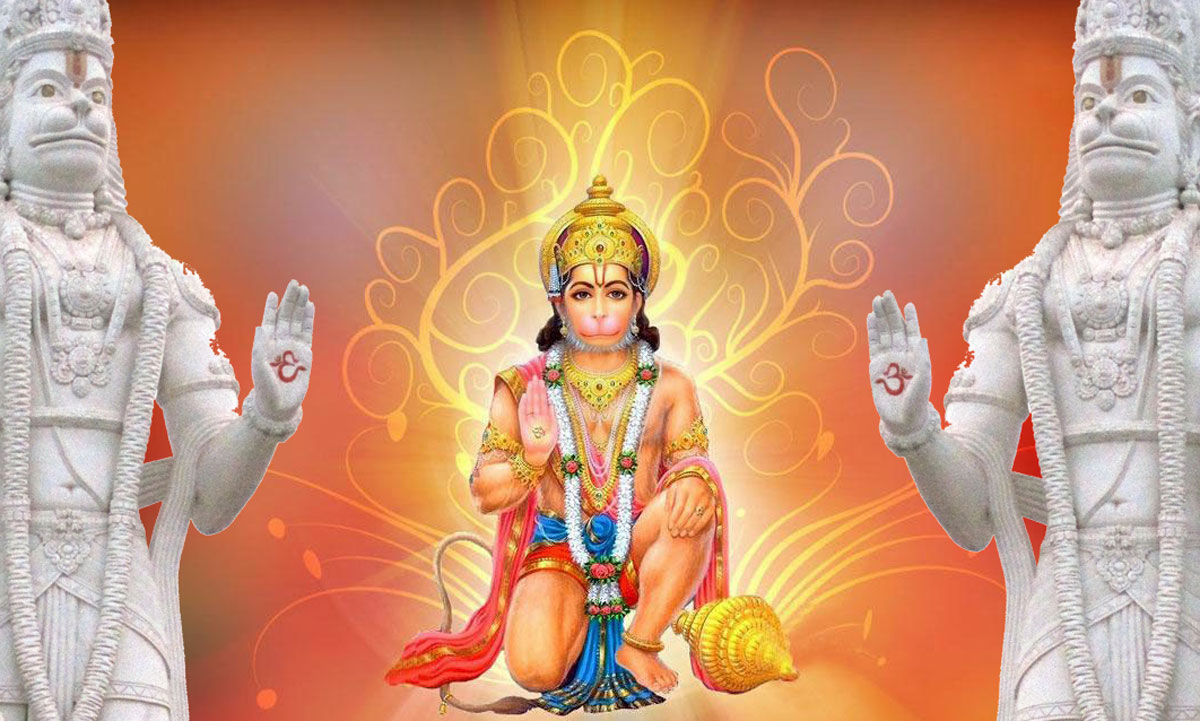 The Era Of Rama

In addition, the legend allows us to confirm the dating of the reign of Rama, avatar of the mighty Vishnu. We know that Rama never left his faithful Hanuman. The date of Hanuman’s birth is specified in the legend: When the sun entered the sign of Aries, Shiva appeared to (Hanuman’s parents), confirming that thanks to this quality asceticism, their dearest wish would be granted immediately: not only did shethe mother would have a son but this one would be valiant and famous for his exploits. They named this son Hanuman  (source) … Aries is Ram, whose name means ram in English. In Celtic countries, he was called Belenos or Bel, diminutive of ram. In the Middle East, it will be called Baal. The edge of Aries, the moment when the sun enters Aries is easy to date: 2000 BCE, 4000 years ago.

Hanuman is sometimes represented standing or kneeling, tearing his chest with his claws to reveal the secret of his heart where Rama and Sita reside. In devotion, standing or kneeling, he performs the protective mudra or he faces Ram, Sita and Lakshmana, brother of Ram. Sometimes, he throws a club in his right hand, in the left a mountain (which contains a medicinal herb that can save the life of Lakshmana). He sometimes flies in the air, since he is the son of Vayu, the god of the Wind. It has five heads, four of which represent a lion man (source).  Four of his five heads represent a lion-man! The man, the lion, the four heads, we are not far from the tetramorph.

As a worthy companion of Rama the conqueror, Hanuman is a warrior god. He possesses a magic weapon, like Indra, Thor, Osiris, Zeus, Cuchulainn or King Arthur. Numerous and incredible are the exploits of Hanuman using his Gadha club. It seems that technology plays a role in this very heavy club, made of gold, and able not only to knock out but also to launch destructive rays. “As a warrior, near him is a gadha, a symbol of bravery, because Hanuman represents courage and strength, and he is the only one who can lift this huge club of gold as he is able to lift mountains (source).”

Is it a gadget capable of removing gravity? Beyond the magical exploits, I am always looking for the high technology of terraforming gods implemented to dry swamps, divert rivers, smooth hills and move mountains. Their equipment was much better than today’s most advanced machines. They used technologies we do not know about: lightning control, for example.

The gods before had great ability in other areas still largely ignored. Their know-how goes beyond what we call science. Like Zeus and most – if not all! – gods from before, Hanuman is a transformist. It can change appearance and size at will. “He also has the power to change size and lengthen his tail to seize his enemies (source).” Is it a magical power, like those of fakirs, shamans or sannyasins, or, again, is it the effect of an unknown technology?

The universe is full of magic and waits patiently that our intelligence is refined.