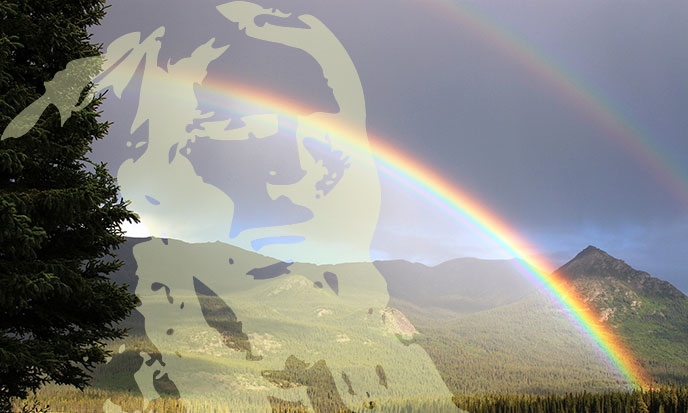 All across the North America, you can find this legend in most Amerindian nations. Here is the version of the Cree Indians: the prophecy of the Rainbow.

The Indians will suffer the invasion of white men, many Redskins will lose their life.

Their souls will come back in bodies of different colors: red, white, yellow, brown and black.

Together and united, as the colors of the rainbow, these men will teach all peoples of the world how to love and revere the Mother Earth, whose very matter is that we are made too, we humans. Under the symbol of the rainbow, all races and religions will unite to spread the wisdom of living in harmony with each other and with all creatures. Those who spread this teaching will be called the warriors of the rainbow. They would have the light of knowledge in their heads and love in their hearts, and they would do no harm to another living being.

But the prophecy of the Cree Indians contained another chapter. After a great struggle with the only strength of peace, warriors of the Rainbow would eventually put an end to the destruction  and the desecration of Mother Earth.

The peace and abundance would reign then for a long golden age, happy and peaceful, here on Mother Earth.

This is a brief summary of the Cree prophecy of the rainbow warriors. In one form or another, this prophecy is common to most Indian nations.

Why did the old red Sages chose the symbol of the rainbow? Because it indicates the return of fine weather after the rain? Or because it unites all the colors? All races united on earth, that is the message.

It would mean therefore that were originally seven races as the seven colors of the rainbow? Is this seven, anyway?

We know that the spectrum has only six colors, three basic: yellow, blue, red – and three secondary, resulting from their juxtaposition by pairs: green, orange, purple. Indigo is a tertiary color, in this case there are many others. They just wanted to make the magical number seven. 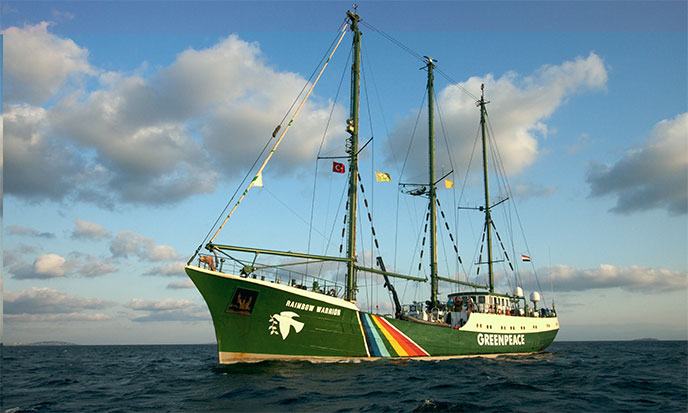 Rainbow Warrior was also the name of the Greenpeace ship sunk in 1985 by a french commando.in which officiated the brother of Segolene Royal, Gerard Royal But even if they have common goals, the movement of the rainbow warriors is not limited to Greenpeace. It is a movement without ideology or guru.

Anyone can call oneself Rainbow if one loves life here and now, friendliness and the planet Earth. “This is not against someone or something they are struggling, this is for.” (source)Waïda, The rainbow warrior

Here is an excerpt from a basic book of the movement:

“As the joyous Indians of old times, new Indians will bring to all people of all races the joy of good relationships, of kindness and courtesy , which make natural community a happy way of life for everyone. They will dance together, they will eat together in harmony and with love. They will pray together and sing their joy. This will come to improve the new world.”

Thus it is Love that the Rainbow Warriors will add to their medicine to cure the world of its ills, and raise it with pure hearts and humble thoughts.

“Great are the tasks before us, terrifying are the mountains of ignorance, hatred and prejudice, but the Rainbow Warriors will rise like on the wings of an eagle to overcome all difficulties.

They will put their faith into action because they know that action is more significant than words. They will be pleased to learn that there are now millions of people around the Earth ready and determined to emerge and join them in conquering any barrier that impedes the path to a better world, a new and glorious world.” (source) 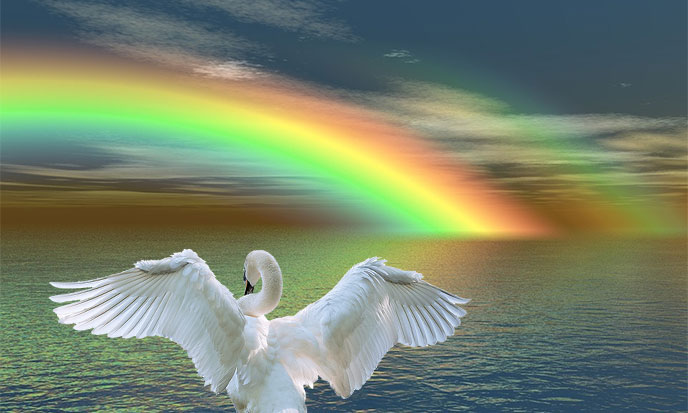 Met at the anti-globalization forum in Porto Alegre, in 2003, one of them made this statement:

“We are people around the world, we are warriors of the Rainbow, in peaceful action, we want to travel and do what we want today. We offer an alternative to mass tourism transports which sell nature as a product and degrade the earth. We travel on foot and on horseback from place to place.

This year, from the Colombian border, we will go to Cuzco and Machu Picchu. The Rainbows are not all “travelers”, some are doctors, lawyers, professors… rather well-off… That is why in the U.S.A., especially, everyone usually make generous donations, hundreds liters of fruit juice brought on gatherings, pounds of watermelons…

They offer you pots, dolls, rings…

In Europe, the “drainbows” (profiteers) break a bit the philosophy of this “natural” movement: people come to eat for free, without consciousness of the purpose, without bringing neither their smiles nor their support nor their joie de vivre.

Europe is probably full of people who lack love, more that in the USA, for example, where people at least pretend to be high… to survive!” (source) 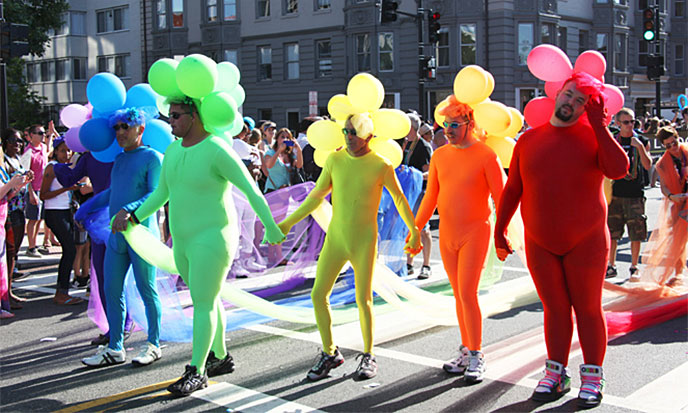 But that was before. We are different. Ten years after. Witness this photo, one of the few that are available without rights on the web. The rainbow warriors are involved in some sort of gay pride. Fantastic. And it deters. This is another vision of the rainbow, why not? Each his own.

The hippies of these large meetings are sometimes caricatured, it’s true.

Still… With the emergence of movements of popular indignation, the Rainbow warriors are thought of as prophets. And hippies too!

The rainbow world is more than a dream: it is a vision. And -as the Indians of the world well know- all visions come true.

Si non e vero e bene trovate / If it is not true it is well found. (My Mother)