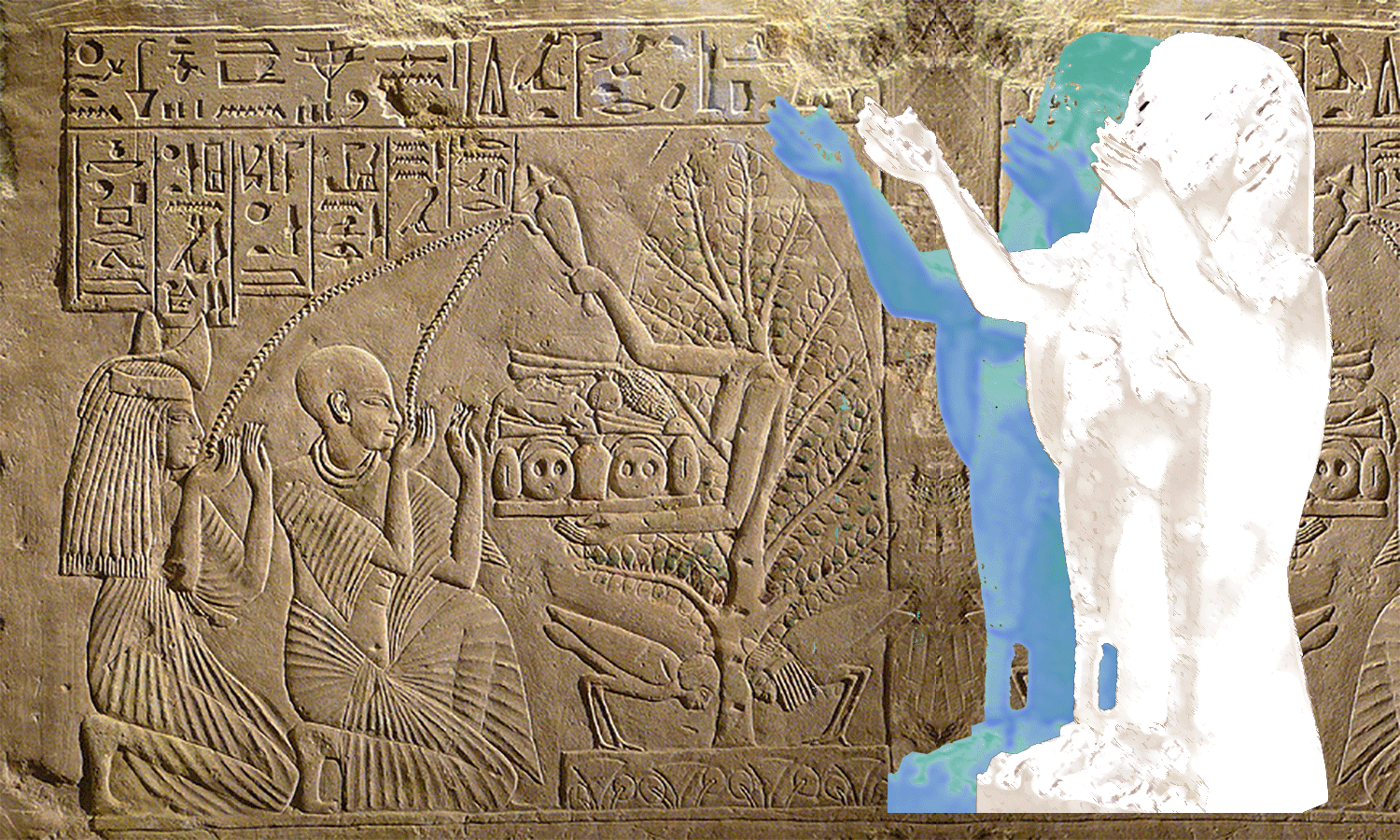 I hesitated for a long time to tell you about the spirituality of ancient Egypt. Often presented in a confused way, it gives the image of a bushy discipline, exotic and without much relation to our contemporary vision.

We therefore turn away from it, considering its lack of interest in modern society. I am convinced of the contrary, and I will tell you why. Less mental than one might think, Egyptian spirituality precisely cuts the partition of being into its three components as I have explained. It accurately describes our three ethereal and material persons, as the tradition to which I belong has always described.

It is the way in which certain specialists have interpreted this science that has made it abstruse, obscure, headache. It is time to tackle this chapter and straighten out some excesses that, as always, come from the aberrated mind. I think I let myself be influenced for too long by these so-called specialists and their off-putting conceptions.

Once again, I give the floor to Wikipediathe orthopedia multipedia encyclomedia just to correct official ignorance and other nonsense. I severely criticize this institution, but I use it nonetheless. All in all, a compass that points south is just as useful as another. As long as you know it. Let’s be fair: the conformist and stuck wanderings of this duck pond have very often – in spite of themselves – opened doors to marvelous gardens.

“Ka is life energy and a spiritual double that is born at the same time as the human. Ka survives in the grave after death thanks to funeral worship and the delivery of food offerings.

Ba, improperly translated as soul, is a spiritual principle that takes off when the deceased dies. This component represents the energy of movement, dialogue and transformation inherent in each individual. Blessed who has attained the status of superior spiritual power, luminous and effective.” (source)

It may all sound strange. This oddity is explained: the commentator does not understand anything what he is saying and does not even see what it is about. The same goes for most of the Egyptological, logical, anachronistic, conformist commentaries, translations or explanations, all dripping with Judeo-Islamo-Christianity.

Like my patron saint Nietzsche, I am allergic to the academic spirit and its square bureaucracy. Let me translate these outdated claims into more familiar language. Ka, according to the description, corresponds to the body of energy or subtle body which carries the vital energy of kundalini. It appears from conception, because it results from the reunion of the physical body and the immortal soul, ba. While ka is the mortal part of the mind, that which concentrates the inexhaustible vital energy resulting from ba, that is to say from the aura, from the immortal soul.

The formula ATH KA PTAH is often translated as The second heart of God Ptah. Ka is not the heart, and yet the subtle body is also called the heart body, because it contains the incessant movement of the emotions and because the junction of ka and the physical body takes place at the heart chakra.

Thus it is through the heart that the union of Spirit and matter takes place, for the greatest elevation of the heart which becomes sacred heart or glorious body. Some ancient Egyptian believed that ka can survive the death of the body by the resources of embalming and food offerings. This is a late superstition, already very steeped in symbolism, which is what remains when everything has been forgotten. The original version of these practices is much more realistic.

The soul and the body could not communicate and join together without this intermediary which has a double nature, material and spiritual. Thus it plays a role of catalyst, it allows the other two components to harmonize. Over time and work on oneself, the warrior of light allows the immortal soul to inform all matter in his physical body. Which cannot be done without lifelong work.

When ba – or the soul or aura or subtle luminosity – enters ka or subtle body, this is awakening. On the inner path of the initiatory tarot, it is the arcane XVI La Maison Dieu.The Tower And when the aura penetrates and informs the whole of the physical body, thus inhabiting the totality of the being, we speak of illumination. It is the arcanum without number, Le Fol or Le Mat.The Fool

All these questions have been the subject of numerous articles. I have already explained this at length in the Healing Secrets, Warrior’s Diary and Wizard’s Diary chapters. You will find these chapters on the home page under the title Present Continuous.

I do not wish to return to it in this article. What motivates me now is to enter into the very vision of the ancient Egyptians, which seems to me very close to the teaching of Carlos Castaneda, itself American echo of the teaching of Lama in Tibet.

In my article Three Persons In You, I take stock of this teaching. Through Jean-Claude Flornoy who found ancient memories and showed me the way, I was put in contact with the religion of Ptah. 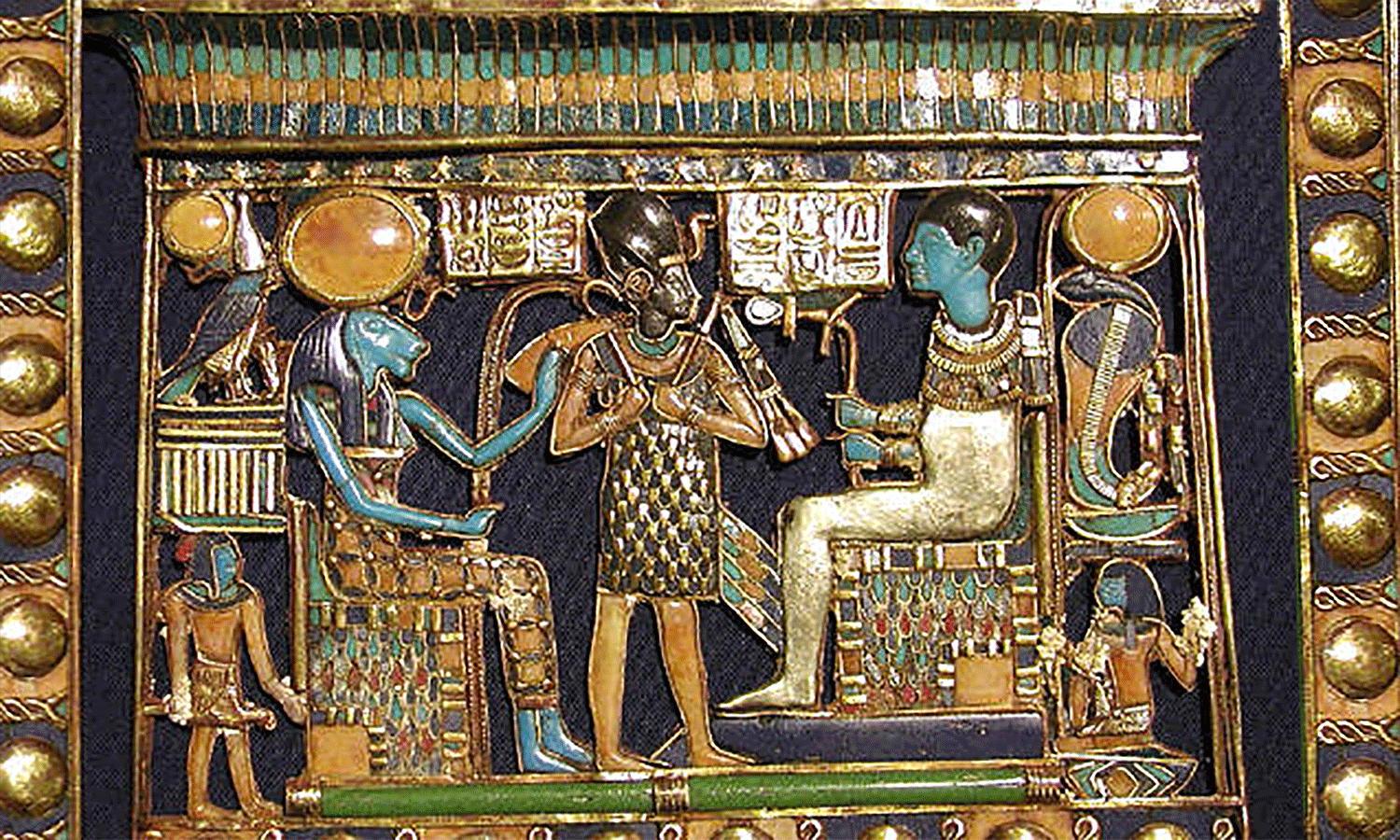 A real mine of precious information can be read on this breastplate of Tutankhamun. We see the young pharaoh between the goddess Sekhmet and the god Ptah – both blue skinned. According to some authors, the blue race, divine race, has disappeared since the departure of the gods.

As for the young king Tutankhamun, it is clear that he is not white. Black or mixed race, such is his ethnicity. I laugh, I think of this Egyptologist imbued with the racial superiority of whites like him. These stories of black pharaohs, it sticks buttons to him. Too bad, I say what I know. No one is forced to believe it. Evidence tends to kill the donkey who lets his donkey bray. It’s his business, and his basket.

Who is Ptah? This is obviously the next question I will have to answer … very soon.