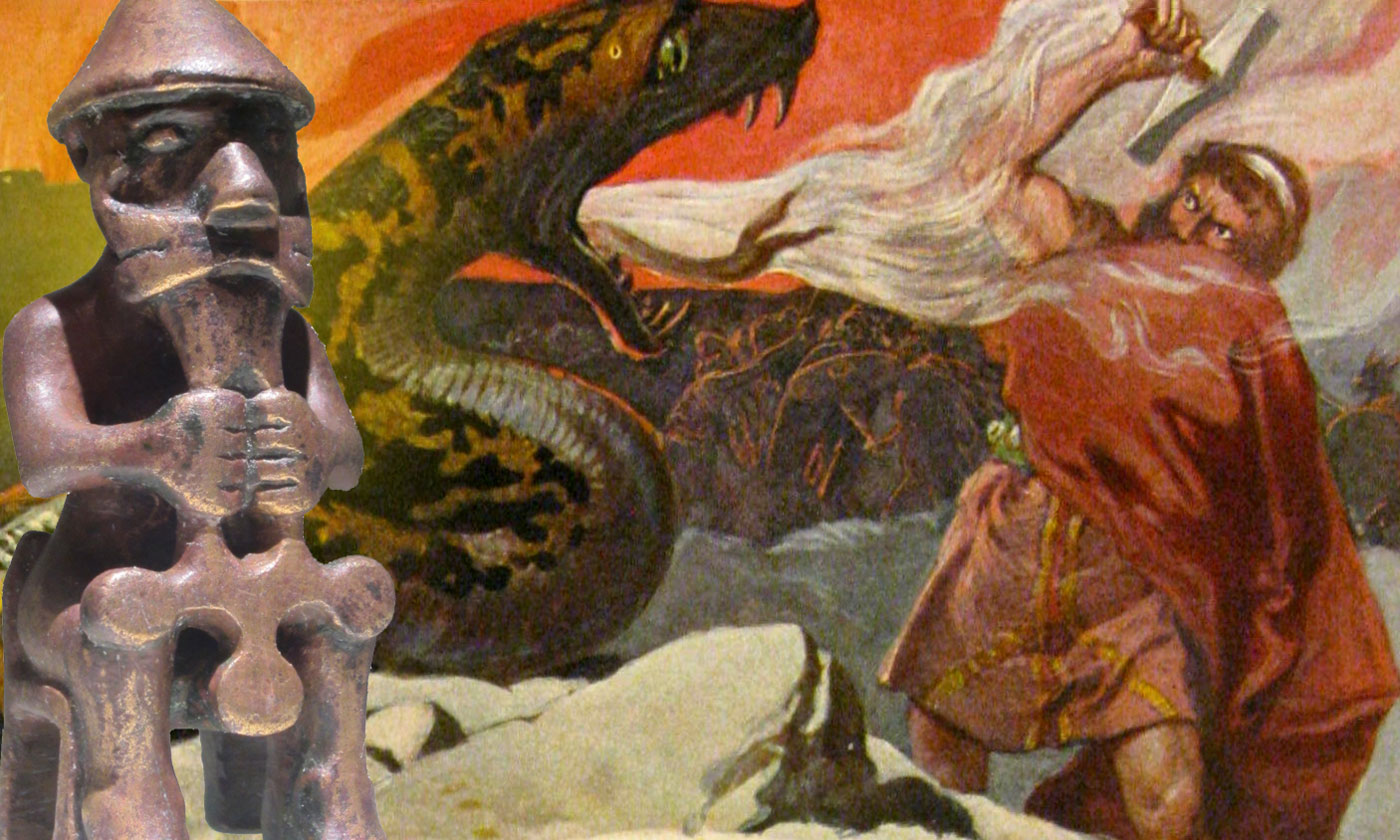 One remembers my perplexity in front of the bronze figurine reproduced above on the left, and further down in this article. According to Wikipedia, she would represent Thor or … Jesus! Personally, I do not see either, but rather a dwarf, and I lean for the dwarf Brokk: he gave Thor the famous hammer that launches lightning. I showed that Mjöllnir the hammer is not one. Mjöllnir is more likely a laser gun. The short handle of the “hammer” is perfect for a handgun. Thor did not knock out his opponents with a hammer, he sent them a ray of death with an electronic gun fed by the belt, a battery – and connected by the iron gloves. Read the whole article.

I had not solved some questions, especially the curious appearance of the hammer in the hands of the dwarf. This object did not resemble the usual representations of the “hammer” Mjöllnir. But I still resolved to put the article online without deciding these nagging questions. It was then that a faithful reader intervened who wished to remain anonymous. I will call it Nef, because his intuition carried me as the ancient nave carried sailors.

In an e-mail exchange with Nef, I said that the “hammer” held by the dwarf was like a Vajra. Like Indra’s Vajra, the Mjöllnir throws lightning that can kill or heal, hurt or heal, drive mad or waken. The radius of Mjöllnir can also clean up a place, consecrate a building, bless a union. This versatility had already caught my attention in the case of Zeus thunderbolt or Osiris crowns. In the American mythological tradition, the xiuhcoatl seems to fulfill the same functions. I was long on the trail of this perfect weapon, spread all over the planet and quoted by all traditions. But never before had I so closely encircled the intimate secret of this ray-launcher.

I daresay that Nef was of great help. No doubt intoxicated by my Language of Goslings, Nef pointed out to me that the vajra verlanreverse is ravaj. Ravage ! Amazing word game! Vajra made so many devastations, havoc, ravage! Vajra used to be a death weapon before Buddha bridled it by gathering its spikes. The vajra has thus become a harmless ritual object that no longer sends out deadly rays, but no longer cures either. Ritual and symbolism is all that remains when efficiency and knowledge are dead and gone.

Once again, I marvel. How can the verlan of a modern French word indicate so precisely the characteristic of an object more than ancient, in the Sanskrit name, a dead language for ages? What inspires me two reflections. Either the gods have hallucinating mental power, capable of predicting millions of hits, of anticipating billions of combinations, in an infinite number of possible evolutionary directions, which seems impossible – but what is impossible for the divine spirit? None of this is real, neither us, nor the universe, nor our ancient past. This is a datum of quantum physics, a place exists only if there is a witness in this place to attest to its existence. Without a witness, nothing is. Everything is constituted as and when our investigations, time as space. Our environment is recreated from moment to moment, which can only mean one thing. We are in a computer simulation. Pawns on a chessboard. Clones in a cosmic reality TV. Elon Musk is of this opinion, and I share it. If they were still alive, Einstein and Tesla would tell us the same thing.

Let me go back to our magic hammer, the famous Mjöllnir, of which Thor was so proud. Did you know that this is not a unique copy? “Similar hammers (Ukonvasara) were a common symbol of the god of thunder in other northern European mythologies.”  Hey? They are no longer called Mjöllnir, but Ukonvasara. It’s Finnish. “Ukonvasara, or Ukonkirves, is the symbol and magic weapon of the Finnish thunder god Ukko, similar to Thor’s Mjölnir.  Ukonvasara means Ukko’s hammer; Ukonkirves also means Ukko’s ax. It has been said that Ukko created the lightning with Ukonvasara The pagan Finns sometimes wear pendants in the shape of a hammer or ax around the neck, just as Christians sometimes wear crosses. “  (Wikipedia)

Ukko’s hammer? So we have ukon, which means: to Ukko, and vasara, which means hammer in Finnish. That’s when the friend Nef exclaims: VASARA ?! vajra is not far at all !!!!! No, dear Nef, vajra is not far from vasara. I even imagine that very similar sounds are confused by the play of accents. Sanskrit joins the old Finnish. The friend Alain Aillet wriggles neurons. His quest for the original language has become mine.

First of all, I thought that Ukko should be Thor’s counterpart, but no: “The Finnish god Ukko is Odin’s equivalent in Scandinavian mythology with the addition of Thor’s powers. Ukko carries a hammer named Ukonvasara, the equivalent of Thor in Finnish mythology is rather Tuuri.”  (Wikipedia) 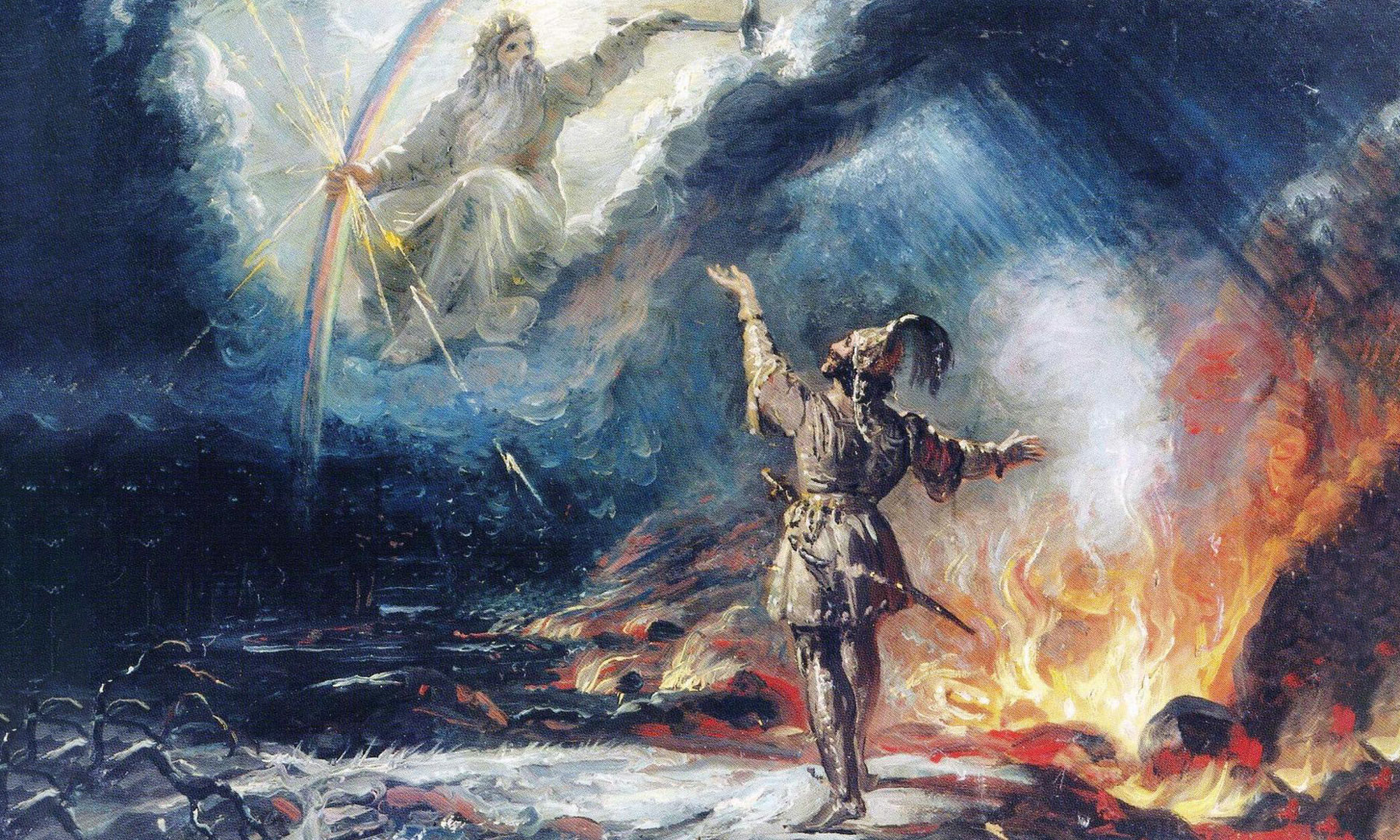 Thor, Tuuri, tuerie, tu ris !!kill, you laugh says Nef. Yes, I laugh. Here comes the proof of the existence of a handgun, which throws lightning, and which was spread all over the earth. Too strong ! The vocabulary of all the ancient languages has piously preserved the trace. Yes, I have banana. And this weapon is only one of the high-tech treasures brought to us by the terraformers. They called themselves our creators, are they the designers of the program that drives us? Do I know ??

This hammer story hit me on the head.

A man does his duty – in spite of personal consequences, in spite of obstacles and dangers and pressures – and that is the basis of all human morality.