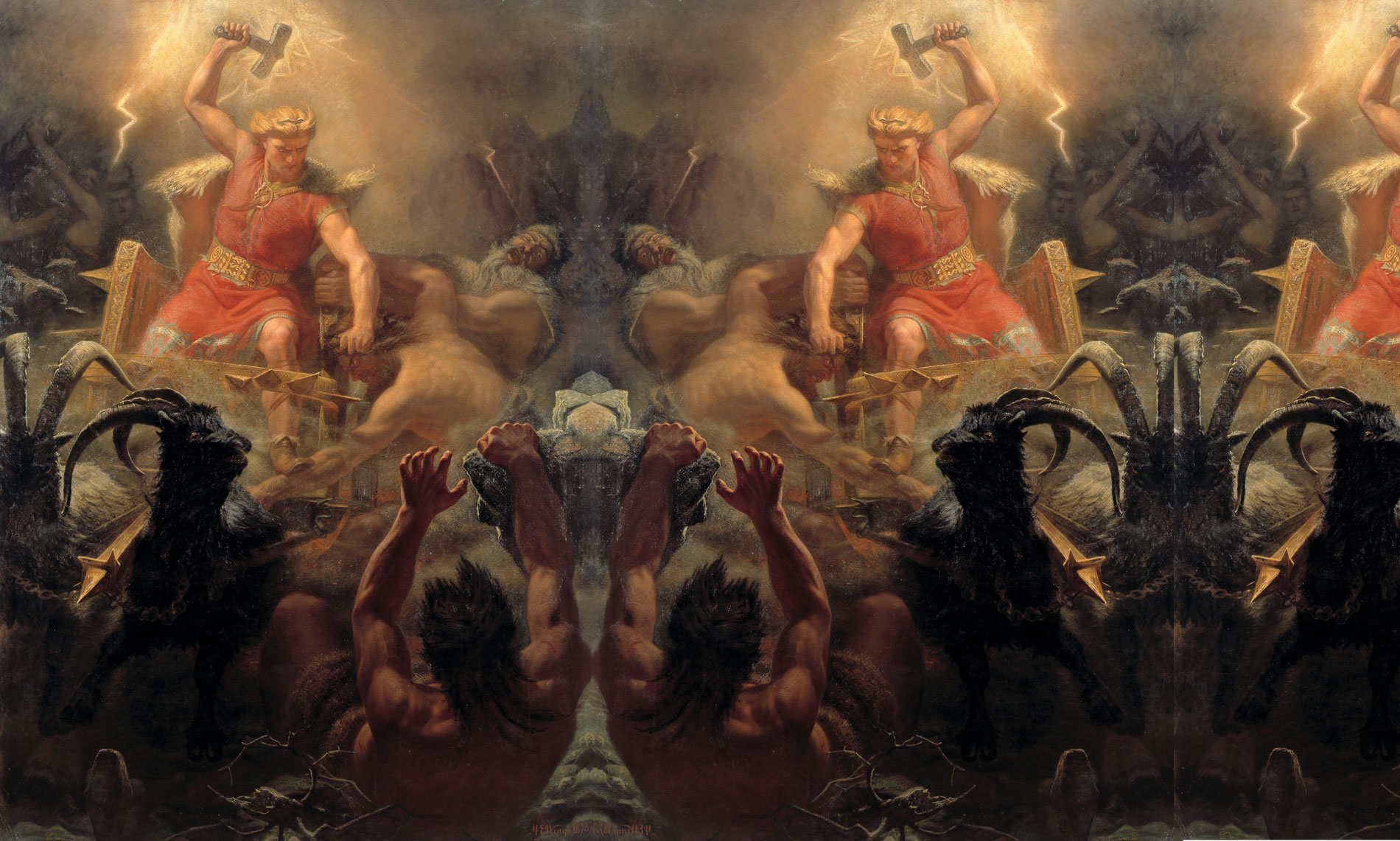 Mjöllnir is the name of the hammer of Thor, the god Ase of the Scandinavians. It is a magic weapon that breaks the skulls of giants, and like a boomerang, always comes back into the hands of his master. Its name is close to the Slavic word meaning “flash”.  (source)

Mjöllnir the magic hammer was forged by a Dwarf. In Scandinavian mythology, Dwarves play the same role as the Cyclops in Greek mythology. Both are the masters of the forge. Gifted metallurgists, they also get along in high magic. The weapons they produce, such as Zeus’s thunderbolt, the aegis of his daughter Athena or the vajra of Indra, seem straight out of a scifi movie. Most of them are able to kill, wound, but also heal the wounded, raise the dead, and awaken with a simple touch. Some are described as radiant, or as Mjöllnir, “lightning weapon of white color”. (source)  Just like the laser sword of the Jeddi knights, these divine weapons are derived from modern technology, far removed from mere metallurgy. We think of the crowns of Osiris, we also think of the Ark of the Covenant. The former gods had more than one trick up their sleeves and more than one weapon in the rack.

Dwarf Brokk gives Thor the hammer Mjöllnir saying “You can hit anything as hard as you want without the hammer getting damaged, you will never miss the goal against which you will throw it, but never the hammer will not fly so far as to return to your hand, and then, if you want, it will be so small that you can hold it in your blouse, but it has a flaw: its handle is rather short.” (source)Skáldskaparmál, chapter 5

Thanks to Mjöllnir, Thor becomes the god of the Thunder of Asgard, his heavenly homeland. The Ases gods do not live on earth. They have a world of their own, in the sky. We recognize the mother ship Hyperborea, which the Sumerians called Nibiru, the vagabond planet. Nibiru is not a planet, it is a mother ship of spherical shape and the size of a planet. Thor was one of Asgard’s bosses, immense was his power. In old Norse, Thor is said Thunarr pronounced like French: tonnerre, and not far from English: thunder. (source) 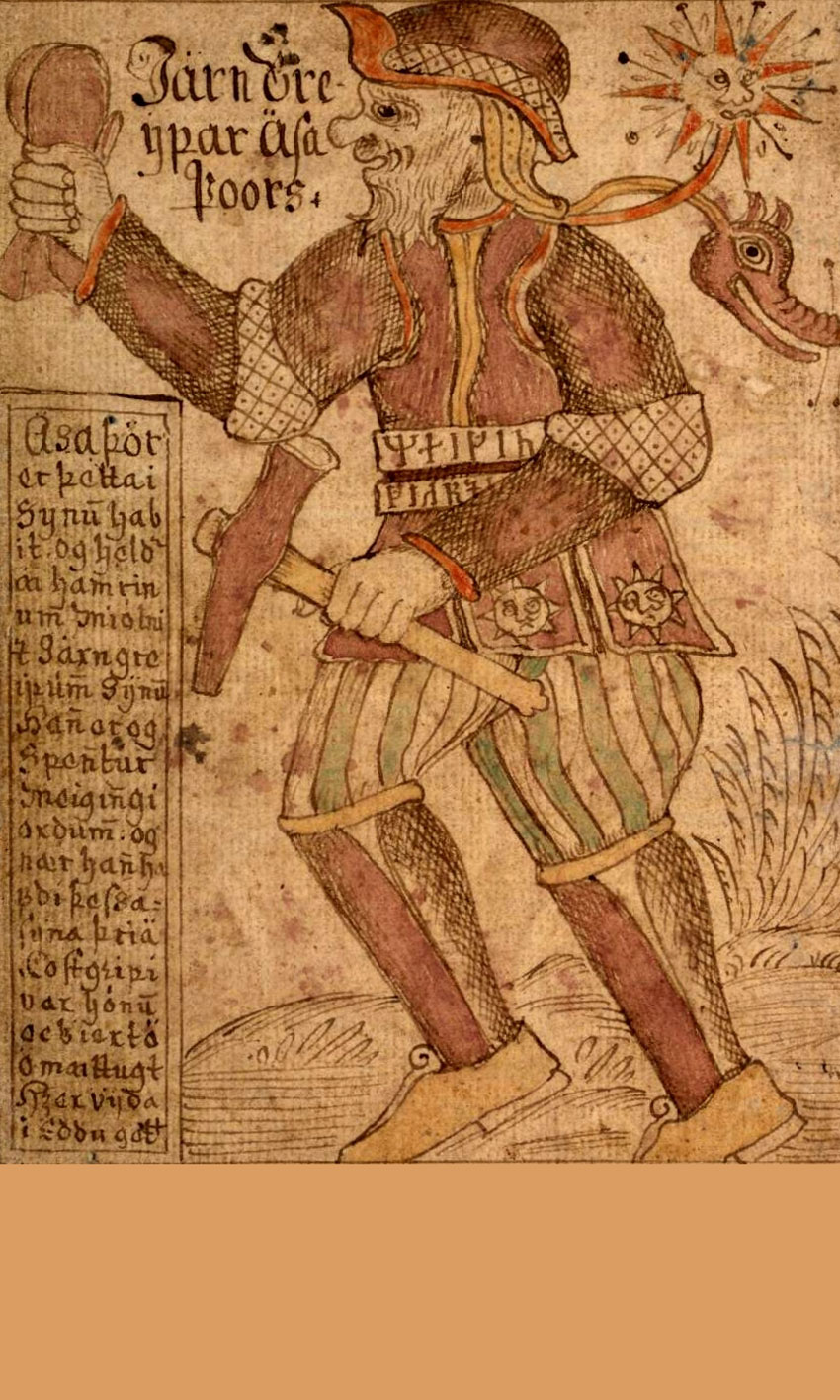 What makes Thor one of the gods of lightning, and not the least: he is the equal of Zeus or Yahveh. To those who would be surprised to see Thor or Zeus, figures of paganism, compared to Yahveh the one god, I would like to clarify this: the difference between paganism and the religions of the unique god is based on a historical misunderstanding.

There was no contact between our ancestors and any single god, especially not with the Creator of all that is. Do not confuse creator and developer. There is nothing unique about it. The gods before were a flop. All the mythological traditions, in which I include the Bible, the Torah and the Koran, are formal on this point. The gods who came to develop this planet and improve the human species are not solitary. In the Bible alone, Elohim, Yahveh, Adonai, there are more than twelve ways of naming God. Or twelve different gods? The Elohim, according to the Judeo-Christian tradition, were seven. Each had his consort, which is already fourteen. The Hindu pantheon has thirty thousand deities. The number is probably not exaggerated. On the planet ship Hyperborea lived no less than 13 million supermen. The angels, the giants, and the little staff were almost all, but the bosses, the higher gods, could be thirty thousand.

Our ancestors did not see the Creator –inaccessible, inexistent perhaps– but a band of terraformers. The word God retained by modern Christians is itself derived from the Greek Theos, which is the name of Zeus. Christians, adepts of the unique god, give him the name of a god among dozens of others, a terrible and evil god who stole power by assassinating his father Cronos or Cronus –whatever the spelling he’s the same.

The unique god is a recent invention, born of the intimate conviction that there is only one source for all the wonders that surround us. Which is probably true. Then we take the tree for the forest. This unique source, we have taken for God, but the gods are legions, and they look like us too much. But the source does not look like us. It is unique and so remote.  When so limited human frequency is lost in multiple universal frequency bands. So the source ignores us. You think you hear its voice in your heart. That’s the voice of your own soul. That is, if you will, the guardian angel, the astral double, a part of you that’s better than you, that’s not always there, that beautifies you when it’s incarnated, and that makes your face bright. The inner light is seen outside. 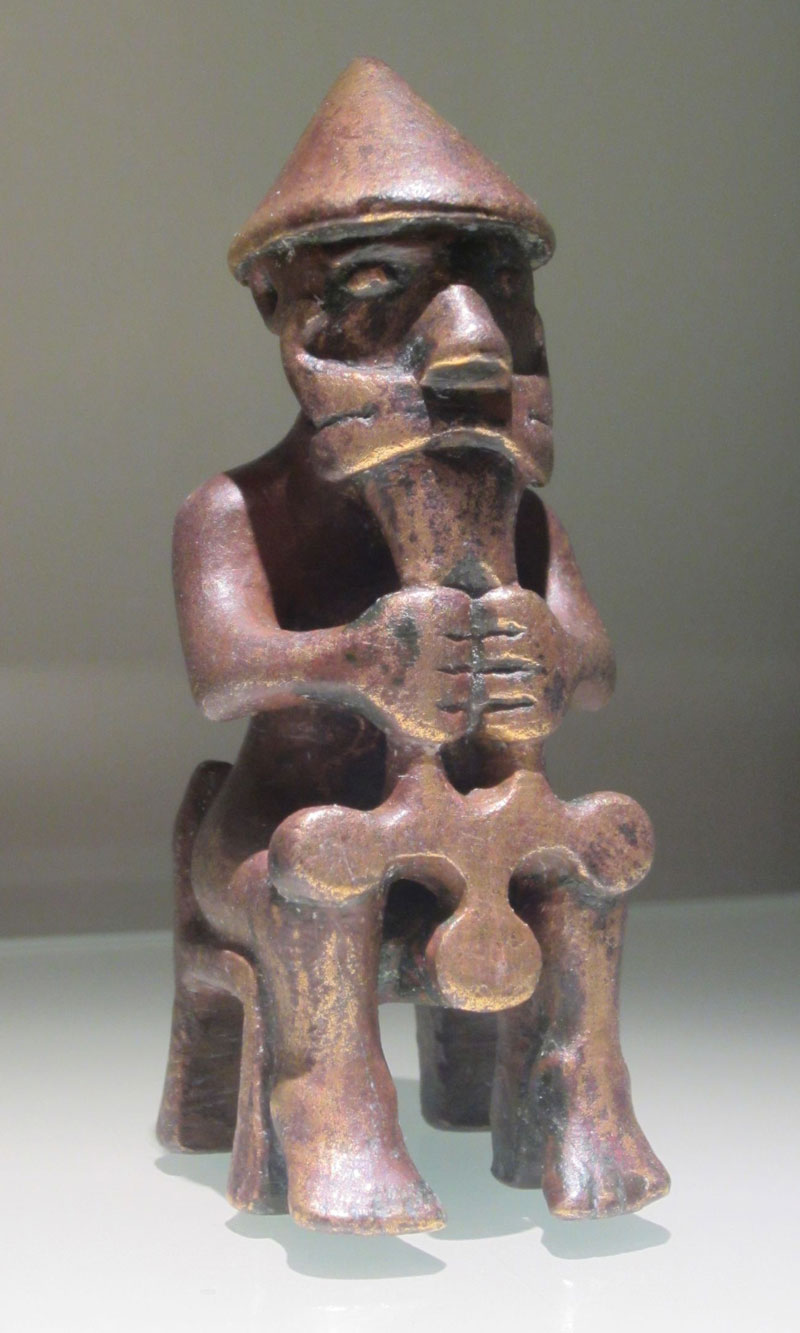 Let’s go back to Thor’s weapon. The magic hammer did not only kill, it also threw thunderbolts and could consecrate a place, bless an object or awaken a person.

Thor was moving in a fast chariot pulled by two magical goats that allowed him to cross the worlds. They were flying, these goats, like Bouraq, the magic horse of Mohammed. I suppose it is still a flying machine, space shuttle or UFO, which Thor was free to move from Asgard, the planet of the gods Ases, to Mitgard, Middle-earth where lived humans. An UFO then, like the chariots of the gods mentioned by Erich von Däniken. Yet the goats exist bezl and well the legend specifies an incredible fact about them. When he was hungry, Thor ate his goats, and the magic of Mjöllnir brought them back to life. Provided that the bones are not broken. Thor put the goats’ skin on their bones, unleashed his magic hammer, a flash of lightning from Mjollnir. The goats immediately began to leap, regenerated like new. Ready to pull the cart, or to serve again as a snack. Which was very convenient. Do not laugh, there is a powerful secret hidden in this part of the tale. It pulsates, I feel it, but it stays in the shade. He taunts me. We’ll see that later.

See the singular hammer that holds the figurine opposite, also reproduced below. This is a statuette of Thor on his throne, holding in both hands a hammer quite different from the Mjöllnir we know. He does not have a short handle, he has two, rather long, which mix with the two points of his beard. The hammer also has a strange shape, three balls together that evoke a technological or symbolic object. For me, either this object is not Mjöllnir, or Thor’s hammer was not one. 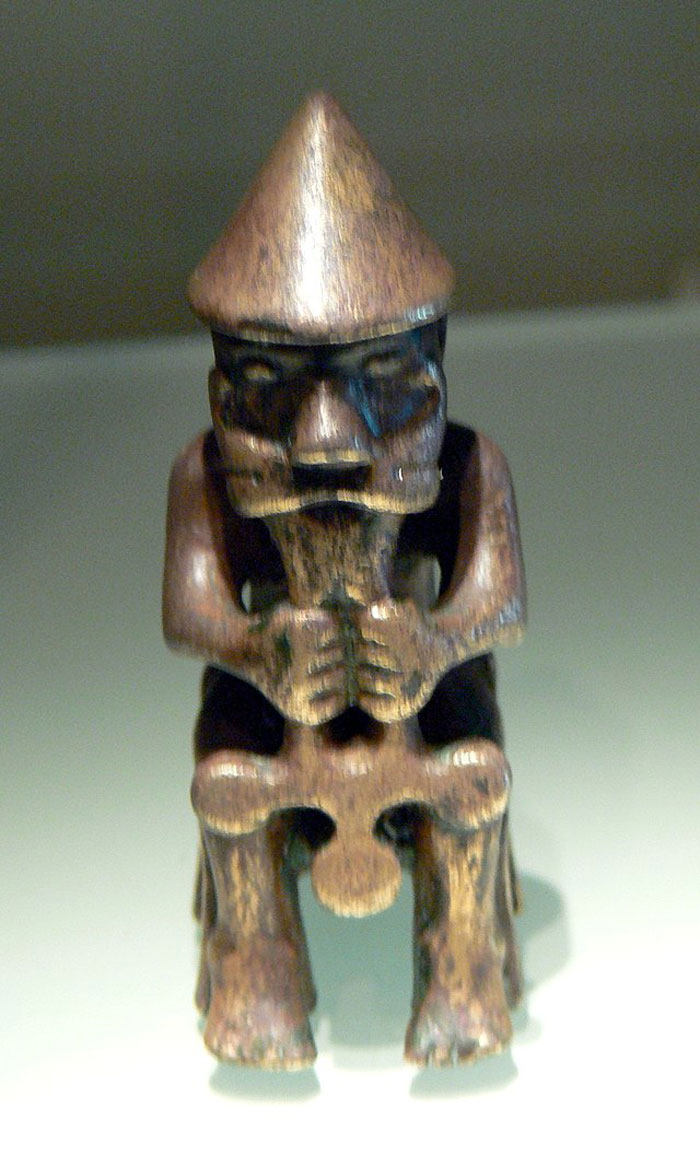 Legend has it that Thor had to wear special gloves, called Járngreipr, “iron gloves,”  every time he grabbed his hammer. Here he does not wear it. We will also observe his pointed helmet, which is more like a dwarf’s cap. But Thor is not a dwarf. So who is it? And what does he hold in his hands? In fact, we are not sure whether it is Thor. A Wikimedia entry reports: Thor or Christ. In my opinion, it does not look like one or the other. And the strange object he holds is not Mjöllnir, nor is it a Christ attribute. The mystery hovers …

Thor also has a magic belt called Megingjord (“that increases strength”). It is not visible on this statuette, any more than the iron gloves. It is said that the belt gave Thor the strength to handle his hammer, so we call Megingjord the belt of strength. Come on! For me, the belt, gloves and hammer are parts of a special high technology equipment, quiute a dangerous one. It was not Thor’s strength that the belt increased, but the power of the hammer. Thor is not half a serving: he eats two whole oxen at his meal, fishing two whales, and lifts the giant cauldron without the need for a belt of strength.

In my opinion, this is an extremely powerful electric battery capable of generating different types of lightning. Megingjord was connected to the hammer by the iron gloves that Thor had to wear when he took Mjöllnir. These gloves were conductive, hence the iron, but they were also insulating inside, so that Thor was not grilled. This reminds me that the Levites alone were empowered to manipulate the Ark of the Covenant. They also wore special gloves. Without protection, all the others were devastated, says the Bible. Electrocuted?

For (not) to conclude

The more I look at this figurine, and the more I see a dwarf there. The metallurgist dwarf who fashioned Thor’s hammer? Or the dwarf Brokk, who gave it to him? Yes, I think it’s Brokk. There remains the problem of the hammer itself, which is nothing like Brokk’s object. What do these three balls mean? An anatomical malformation? No I’m kidding. And the interplanetary goats? Yes it tickles me, but I do not understand anything. If I ever find something, I’ll talk to you again. Finally I realize that I have asked many questions in this article, without really giving an answer. Whatever ? The answer is yours. Feel free to send me your suggestions.