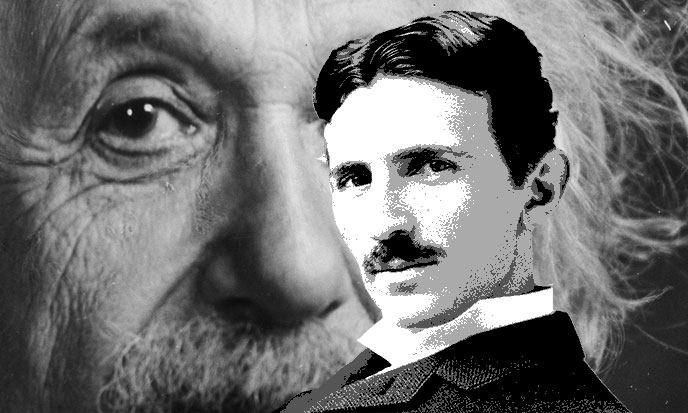 When Einstein was asked how it felt to be the smartest man alive, he replied: “I don’t know – you’ll have to ask Nikola Tesla”

In 1919, one of the greatest inventors in the field of electricity and magnetism, the Yugoslavian Nikola Tesla took stock of his inventions. (source)Tesla, My Inventions It took more than a century for his works to passionate a new breed of inventors. But not investors.

“Nikola Tesla was born in 1856 in Smiljan, in what is now Croatia. Legend has it that his birth occurred just when a storm raged in strong electric shocks.” (source)http://www.inmesol.fr/blog/nikola-tesla-le-scientifique-qui-a-eclaire-le-monde-1856-1943 How interesting! Thus, there is a possibility that Nikola Tesla has received enlightenment by fire from heaven at birth. And it’s not a picnic.

Such an event would explain better the incredible inventive genius of this man who has developped his research well above the current level. Naturalized US citizen, Tesla has mainly studied the confines of electricity and magnetism, which makes him a pioneer of geo-energy, also called Vril energy. Note that Tesla himself never used the word Vril, which appeared after his works. But he can still be considered the first explorer of this amazing energy. The first in modern times, of course. Since antiquity abounded of Vril, which seems to have been known since the Sumerian era.

The lightning rods of the Temple of Solomon and the temple of Uruk are tangible evidences.  But Tesla did not need to go back that far. In any case, not consciously. He just needed a hike in the mountains. Did he get a lightning ball in his body?

“One day I wandered in the mountains, I tried to take shelter from a storm approaching. The sky was in charge of heavy clouds and however rain did not come, when suddenly there was a flash of lightning followed by a deluge. This made me think.

The two phenomena had clearly a relation of cause and effect, and I came to the conclusion that the electrical energy involved in the rush of water was insignificant.

But that the flash of lightning was playing the role of a very sensitive trigger. This suggested a great possibility of realization. If we could produce electric effects of appropriate quality, we would be able to transform the conditions of existence on the whole planet. The sun evaporates water from oceans and winds drive it off on areas where it remains in a state of unstable equilibrium. If we could break this balance where and when we wish, we would be able to control the flow of life. We could irrigate arid deserts, create lakes and rivers and produce the driving force at will. That would be the most effective way to put the sun in the service of man.” (source)Tesla, My Inventions 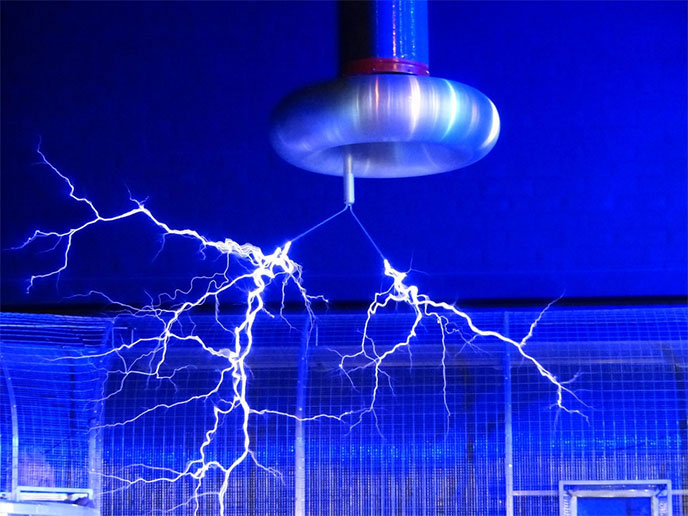 He is right. And this brilliant idea, he probably caught it in the distant memories of our ancestors the gods before the flood.

The poet’s muse, the intuition of the researcher, the imagination of the painter have no other origin. What Tesla saw for the future has existed in the past, according to the lesson of Ecclesiastes. The former gods covered the planet with megaliths and pyramids that have rained down cataracts on the affected areas.

The large stones also had other effects, closer to magnetism and bio-electronics, that we have studied elsewhere. But about agriculture and energy, the brilliant intuitions of Tesla open the door to a new era: why not a return to the golden age?

Like his illustrious predecessor Benjamin Franklin, Nikola Tesla is working on the lightning rod, but with a very different purpose. Franklin only wanted to send back to earth the lightning energy, in order to protect tall buildings from damage that lightning may cause. Tesla, as for him, wants to use lightning to improve our environment and fight against the aridity.

At a time when drought is the major problem of the poorest countries, it is strange that his works are still untapped. It is probably due to the power of oil and nuclear lobbies blocking the emergence of a free energy…

The first problem that came up to Tesla is how to capture lightning? “Success would depend on our ability to implement electrical forces of the same order as those of nature. Back in the U.S. during the summer of 1892, work began which were for me all the more motivating than similar means were necessary for the success of wireless communications.” (source)Tesla, My Inventions That is how he embarked on the construction of his famous tower of Wardenclyffe in Long Island, NY. Its purpose was twofold: to serve as conduits for telegraph and telephone, and to serve as an emitter of atmospheric energy.

The dome was the lightning sensor, and when the shock came to the tower, under the brutal effect of lightning, the energy package was sent through the air over long distances. Tesla led several experiments that were not successful. And the Tower of Wardenclyffe, never completed, was demolished in 1915. 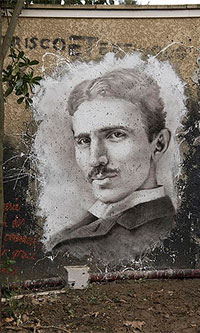 Despite the relevance of his theoretical works, Tesla was always struck at the lack of understanding of the macro-economic policy makers. Capitalist civilization obsessed with dividends, opted for alternating current which is, incidentally, another invention of Tesla.  Because the current has a big advantage: channeled in cables, it marks the meter and can therefore bring mountains of dollars, which is the sole purpose of capital. Tesla has always been a visionary, as evidenced by his memoirs. As soon as he caught the attention of the general public, he turned into a barker, accumulating spectacular demonstrations and the most daring prophecies.

What, in the century of Jules Verne and of wonder at the magic of electricity, was not as incongruous as it looks today. Especially that its patents were among the most lucrative in the short history of industrial property.

And that devilish Tesla created new inventions at a phenomenal rate. He had always something new coming out of his hat. The only ones that had no industrial development are those that would yield nothing, and wireless power transmission is one of those.

“It is perhaps no coincidence if the 1890s were also the glory years of the tabloid press, which went fiercely at inventors in general and at Tesla in particular. His dazzling research on high frequency and his demonstrations of scientific magic to the millionaires he frequented, his many eccentricities, his exuberance, his mastery of several languages and literary knowledge, his propensity to fantasize about future conditions with more or less complacency, all this allowed him to become a favorite of editors as, for example, his friends Hearst and Collier.” (source)

Tesla’s theories were not very orthodox: he developed his idea of wireless energy transfer in 1891, when the system of production and distribution of energy that currently prevails was falling into place. No one at the time, was ready to invest in a system that would provide free energy. Basically, a simple idea: to bring energy, as messages, through the air.

According to him, and his studies prove it, the thing is entirely possible.

For him, it was not the free propagation of electric waves in space, as its detractors have criticized him, but rather a phenomenon of conduction of thecurrent through the air or ground.

He had a bluffing theoretical advance, since he presupposed wave behaviors that evoke, far prior to date, quantum physics and its field theory. His misfortune was that he did not have measured enough the money thirst of capital. The world had already chosen his new god, the dollar, which would reign unchallenged on earth for over a century. And for how long yet? Tesla was crushed by the machine which falsifies history. He was forgotten. “His persistence in wanting to transmit electricity wirelessly as simple messages, prevented his pioneering work in the field of wireless to be officially recognized in the United States for many years.” (Source)wikipedia

Recently, a renewed interest for he who was the greatest genius of electro-magnetism and the true discoverer of Vril put up again Nikola Tesla in the spotlight of research. And he deserved it.

Tesla’s inventions, especially in the field of wireless, had more than a century of advance. They are those that will allow us to start a fairer, more varied, more exciting world. Maybe is it already here?

Let the future tell the truth, and evaluate each one according to his work and accomplishments. The present is theirs; the future, for which I have really worked, is mine. (Nikola Tesla)