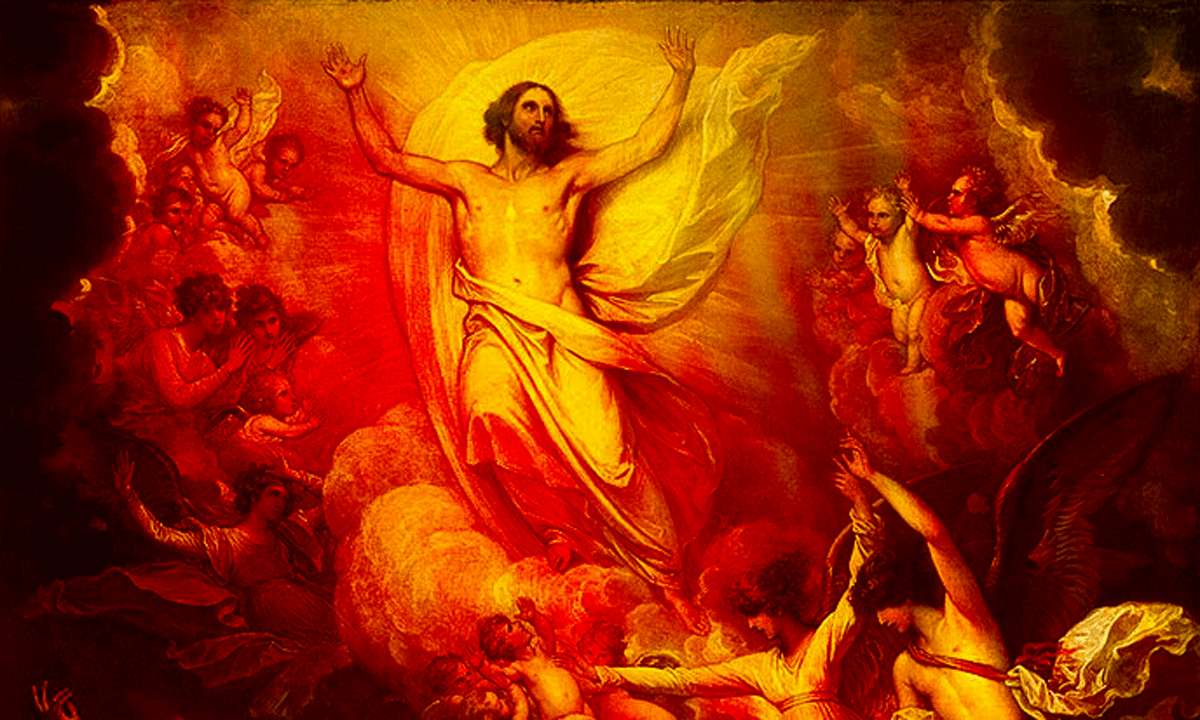 Enoch in Hebrew means “the one who is consecrated, initiated”. To compare with Christos which means in Greek “the anointed one” ie the insider, the one who got the unction. Enoch would be a Christ, too.

If you look closer, there are famous similarities between Enoch and Jesus. They resemble each other like brothers indeed… Besides Pierre Jovanovic teaches us that the favorite book of Jesus was the book of Enoch. Tell me who you love, I will tell you you who you are. Jesus had so internalized his model that he imitated him entirely. Enoch and Jesus were both initiated. They frequented the gods, were familiar with the angels , had one foot on earth and the other in the sky.

Enoch was tempted by the Rebel Angels, ie Satan. As Enoch, Jesus was tempted by the devil. And as Enoch, he was able to resist the temptation. Enoch was taken into space by the Elohim, foreshadowing the modern abduction stories. Like Enoch, Jesus was taken up by the divine: his rise to glory is also a kind of abduction. Anyway, we have the right to see it as well. It is true that Jesus’ time seems very different from the distant era when Henoch lived, when the gods lived among men.

“Seventh antediluvian patriarch since Adam, Enoch is above all the witness of a time when humanity would have begun to descend into chaos under the impulse of the Rebel Angels and the Nephilim, these hybrids with rare strength and ferocity.” (source)Melusine Vaglio, Elohim, another story of evil, Armand Colin, 2010 It is understood that the monotheistic religions did not particularly want to dwell on this period when the gods were numerous, where they kidnapped men in their ships and where the One had a plural noun…

Incidentally, I find instructive that biblical scholars speak of hybrids to designate the divine-human children. Hybridization is the crossing of two species, as we have seen. The Elohim are therefore animals like us: the angels loved the human girls. Suddenly, the scene of the Annunciation becomes comical. The announcement to Mary would it be only a X-rated history? Could the archangel Gabriel be Hot Shot Gaby and Jesus, a kind of hybrid?

Chapters 37 to 71 of the Book of Enoch from Qumran include the parables of Enoch. You can find there the source of many of the parables of Jesus, as the Book of Enoch was “the only book that the Christ quoted regularly because he knew it by heart.” (source)P. Jovanovic-A.M. Noisy, Enoch, Garden of Books, 2002 Jesus, as we all know, had a penchant for parables. Enoch, his beloved model, also liked this form of teaching. What are parables if not teachings-stories, like the Sufi tales?

“After this time, in the very place where I had seen so many mysteries, I was abducted by a whirlwind and carried westward. There my eyes perceived the secrets of heaven and those of earth; an iron mountain, a mountain of brass, a silver mountain, a mountain of gold, a mountain of a liquid metal, and finally a mountain of lead. And I asked the angel who was with me, and I told him; What do mean these things I just saw? And the angel answered: They look the empire of the Messiah and are a symbol of his reign and his power on earth.”

If Enoch is the elected, chosen by the Elohim to be raised among them and initiated in the great secrets of the universe, Enoch is not the Messiah. He is the one who announces the Messiah, as all the prophets after him. Jesus walked in a majestic alley, that had opened in the Jewish imagination the expectation of a Messiah, a savior. For him, it was tempting to endorse the costume of glory cut for years. This is why Jews have found it a bit cheap and have not swallowed the bait. They still await the Messiah. But no. But yes.

“And the angel of peace answered me again: Please wait still a little time, and you’ll see, it will be revealed to you all the things that decreed the wisdom of the Lord of Spirits. These mountains you have seen, and which are one of brass, the other of iron, the third of silver, the fourth of gold, the fifth of a liquid metal, the sixth at last of lead; all these mountains, I say, will be in the presence of the elect, as a honeycomb in front of a burning furnace, or like water flowing from a mountain top; they will fall at his feet.

In those days, men will find their salvation not in gold nor in money. They won’t be able to flee nor to defend themselves. So there will be no more weapons to manufacture with the brass nor armors to protect the chest. The iron will become useless: it will not help even that it rusts or wears out, and lead will no longer be desired. Everything will be rejected, everything will be erased from the earth, when the elect will appear in the presence of the Lord of Spirits.” (Source)Book of Henoch, 3-51

Even more troubling, here Enoch speaks no longer of the Messiah, but of the Chosen. Yet it is his own title. Ambiguity keeps coming between the two elects of God, Jesus and Enoch. No wonder the book of Enoch was, says Baigent, the bedside book of Jesus. He found powerful and holy aspirations. It is surprising especially as the Book of Enoch, distinguished by Jesus Christ himself, has been so ignored by the church that it was simply removed from the canonical Bible.

For their part, Jews have also removed it from the Torah. These stories of extraterrestrials and flying machines smack definitely too much of heresy. Only the orthodox, faithful to their name, have kept the first biblical version including the Book of Enoch.

Religions exist since the first hypocrite met the first fool