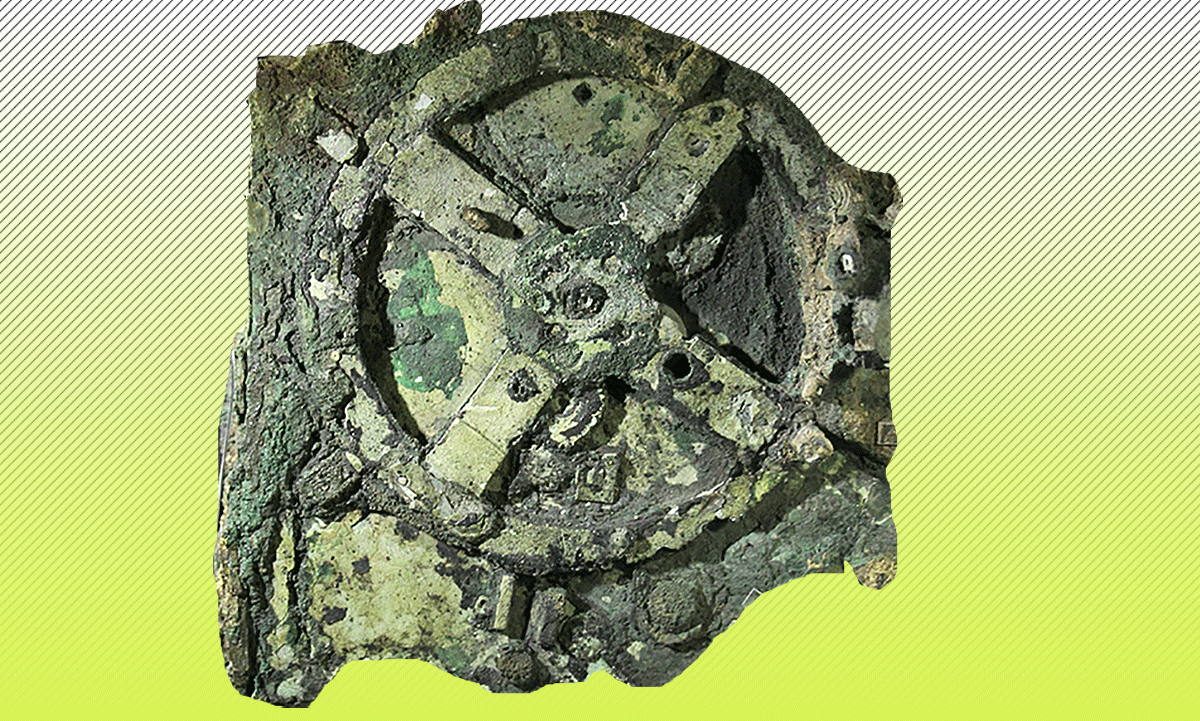 Archaeology, more than other scientific disciplines, is deeply marked by the beliefs and convictions of scholars. As such, it remains one of the scientific fields where the a priori put obstacles to real discoveries.

Or is it that when discoveries are made, and impossible to conceal, Western archaeologists contrive to ignore them because they do not fit with the current representation of our past? It is a scam.

The Antikythera Computer is a good example: the mysterious object was initially ignored, until one researcher -courageous and lucky- exhumed it from the reserves of a museum. Then science finally got interested in it. And then the Internet flew to the researchers’ assistance.

The stunning history of this complex machine started at Easter 1900. A crew of sponge fishermen was fleeing a gale and diverted to the island of Antikythera, between Crete and the Peloponnese.

The snorkelers spent a few days looking for sponges on the shores of the island, waiting for the weather to improve. They discovered to 40-yards deep a large wreck: about 100 yards long! The wreck contained several statues including the famous Antikythera Adonis.

This hollow bronze statue is an extremely rare archaeological artifact. Back in Greece, the crew reported the discovery and the museum of Athens hastened to send a team there. In view of the cargo, it is assumed that the ship was Roman, that it came from Asia Minor, perhaps from Pergamum, and had stopped in Rhodes.

The shipwreck is dated at -85, ie during the wars of Mithridates. But let’s get back to Antikythera, on the underwater site where the archaeological team from Athens has just joined the divers.

Contrary to expectations, the search was particularly long and costly. Several accidents happened, with one death. This is by raising a marble statue of a horse that a diver was killed.

The statue, breaking its cables, was irremediably lost. In the cargo was a particular object. When the matrix broke, they discovered various gears and mechanisms. They took it for an astrolabe and the object was forgotten in the reserves.

It was not until 1955 that a researcher got interested at last. Derek de Solla Price, a British scholar, began a careful study to which he devoted the rest of his life. In 1980, the Internet could enhance the reflection on the subject. 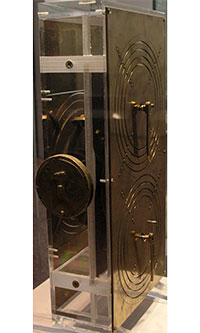 Four reconstructions were performed. In 2000 the study of the computer gathered about 150 people from several universities. The application fields ranged from history to math, geometry, astronomy, epigraphy …   The research was facilitated by the grant of an X-ray scanner that could show the inside of boxes without dismantling them and with a remarkable precision.

The Antikithera Computer has the shape of a book, with several components on a shoebox-shaped case. Protected with a bronze cover, the first “page” appears to be an introduction to astronomy.

Other machinery and rail systems would indicate lunar and solar cycles, eclipses, and winds.

The start of the mechanism would be a calendar based on the Egyptian system, but the machine was indexed in two, according to the Greek Olympic calendari.e. 360 days plus 5 calendar days. and the Egyptian calendar.

Obviously this device is not a Greek or Roman invention. It is a remnant of the global technology of the Civilization of the Pyramids, some call Atlantis.

Moreover it is a great overview. The door of oblivion suddenly ajar is filtering the beautiful light of an everlasting world deep in the heart of secret. 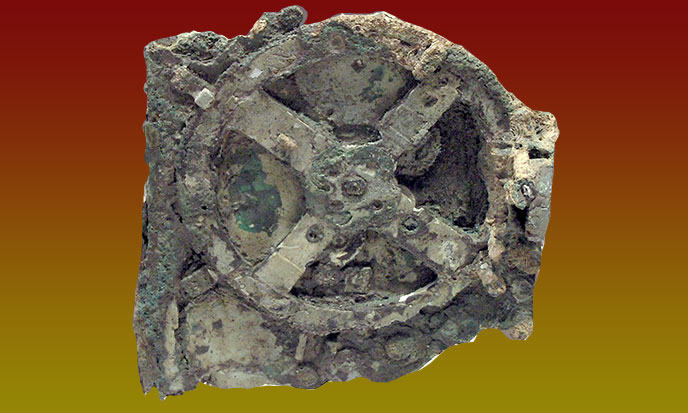 Our historians refuse to consider the existence of an advanced global civilization disappeared before the dawn of our antiquity.

This ignorance leads to naive judgments and zero analysis. The case of the Antikythera PC confirms this.

For the Greeks, mechanics is a branch of technology, gift of the goddess Techné. The triumph of technology allows man to dominate nature. Sources claim that Archimedes had constructed a complex mechanism, a planetarium. The innovation lay in a system of redistribution of movement called differential. This determining invention, that was more or less forgotten until Leonardo da Vinci, was nevertheless included in The Antikythera Computer. By acquiring this type of machine, every Roman aristocrat ensured exceptional reputation and social outstanding.

Therefore it is possible that this mechanism was the product of an order. But it seems more likely to be, as well as the cargo, the spoils of a plundering after a military victory. In this case, its origin and age remain unknown. Originally the machine gave the day, the movement of the sky but also the winds direction, their intensity, their period: winds had long been associated to lunar phases. Technology and science below are not fields specific to our centuries. The Antikythera Computer is the evidence: men quickly raised important questions, especially astronomy.

The civilizations that have preceded us had acquired a certain degree of knowledge, with limited means The Antikythera Computer shows the extent of the Greek knowledgeOr prior knowledge transmitted by the Greeks. in astronomy, mathematics, geometry, crafts and cultural refinement. (source)This conference of Eric Zurcher is a summary of his thesis work, which itself resulted in a publication. These excerpts from a “scientific”I pity this kind of science! conference summarize the current knowledge about this complex calculator. The findings of the lecturer are directly in line with the current mainstream thinking, so we won’t hold it against the author, who was saying what everyone said.

However it is painful to hear about the Greeks or the Romans: “Men quickly raised important questions“ Quickly! As if they just came down the banana trees! This knowledge was not born with the Greeks.

As in the case of the theorem of Pythagoras, it was certainly prior knowledge transmitted by the Greeks. If this mechanical knowledge were contemporary of the ancient Greeks, Antikythera computer would not be a single object. Like the ancient Egyptians, the ancient Greeks are the inheritors of a very long period of science and civilization. Many of us already know, but shocked science still refuse evidence.

The author adds: “The civilizations that have preceded us acquired a certain degree of knowledge, with limited means.” If the Greeks or the Romans had limited means, the Franks and Goths in the Middle Ages had far more limited means then. Where is the progress in this case? Greco-Roman antiquity used glass for windows ; houses had running water, underfloor heating, hot baths and toilets.

This is over the centuries and barbaric invasions that comfort and technology have disappeared. Just a period of barbarism to erase centuries of progress. Ancient Greek medicine was probably more powerful than that of the physiciansdoctors of Moliere. On the other hand, if you go back two or three thousand years before the ancient Greeks, you will find a medicine and surgery comparable to ours. The countless Neolithic trepanations clearly demonstrate. It looks as both technology and know-how had steadily decreased over the millennia, until the 17th century, when finally started a new technological era. At long last !

Many other findings clearly show that technology is a very ancient reality. “Ancient knowledge was a lot more refined and developed than we have been taught hitherto. From batteries to planispheres, an assortment of gadgets have been excavated and found.

Two notable finds were the Nimrud lens and the famous Antikythera Mechanism. The 3,000 year old Nimrud lens was discovered at the palace of Nimrud, in Iraq. Some experts believe the lens was part of an ancient telescope the Babylonians used, hence their advanced knowledge of astronomy.

And the famous Antikythera Mechanism (200 BC.) was created to calculate the movements of the sun, moon and planets to predict celestial events. Unfortunately, we can only speculate on the ways many of these devices were created, used and why the ancient knowledge pertaining to them disappeared for millennia afterwards.” (source)

Seen in this light, the Antikythera Computer is not the work of a brilliant craftsman of the first millennium BC. The craftsman, very clever, would have been the copyist of a much older mechanics, itself copied from another, etc.. 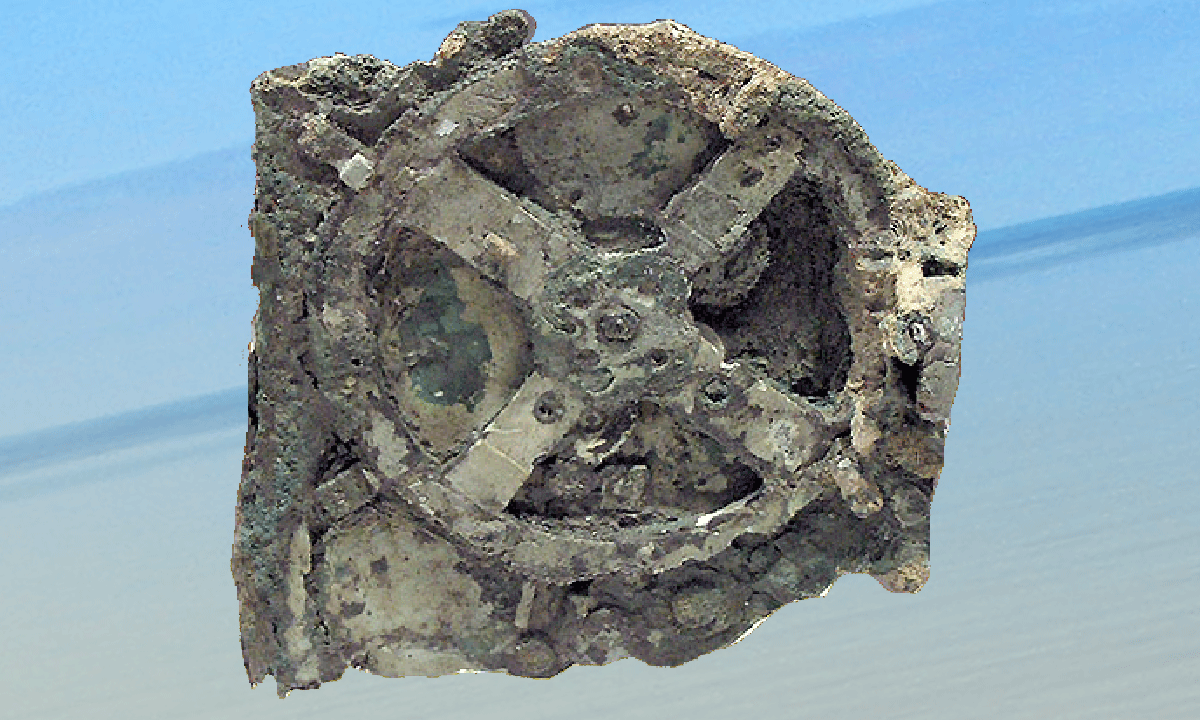 Thus the famous portolans of Admiral Piri Reis of Turkey have been passed down to us. Metal, such as paper, deteriorates with age. Zealous scribes, skilled craftsmen have been regularly asked to reproduce knowledge that get lost in the mists of time. We have seen how the ancient Greeks, inheritors of very ancient knowledge that far exceeded their level of understanding, were led to very comical misinterpretation sometimes, as the myth of Plato’s cave.

As history persists in denying the evidence, we will continue to ignore thousands of years of human adventure. Why must intellectuals be so stupid? Simple enough: it’s called Kaliyuga.