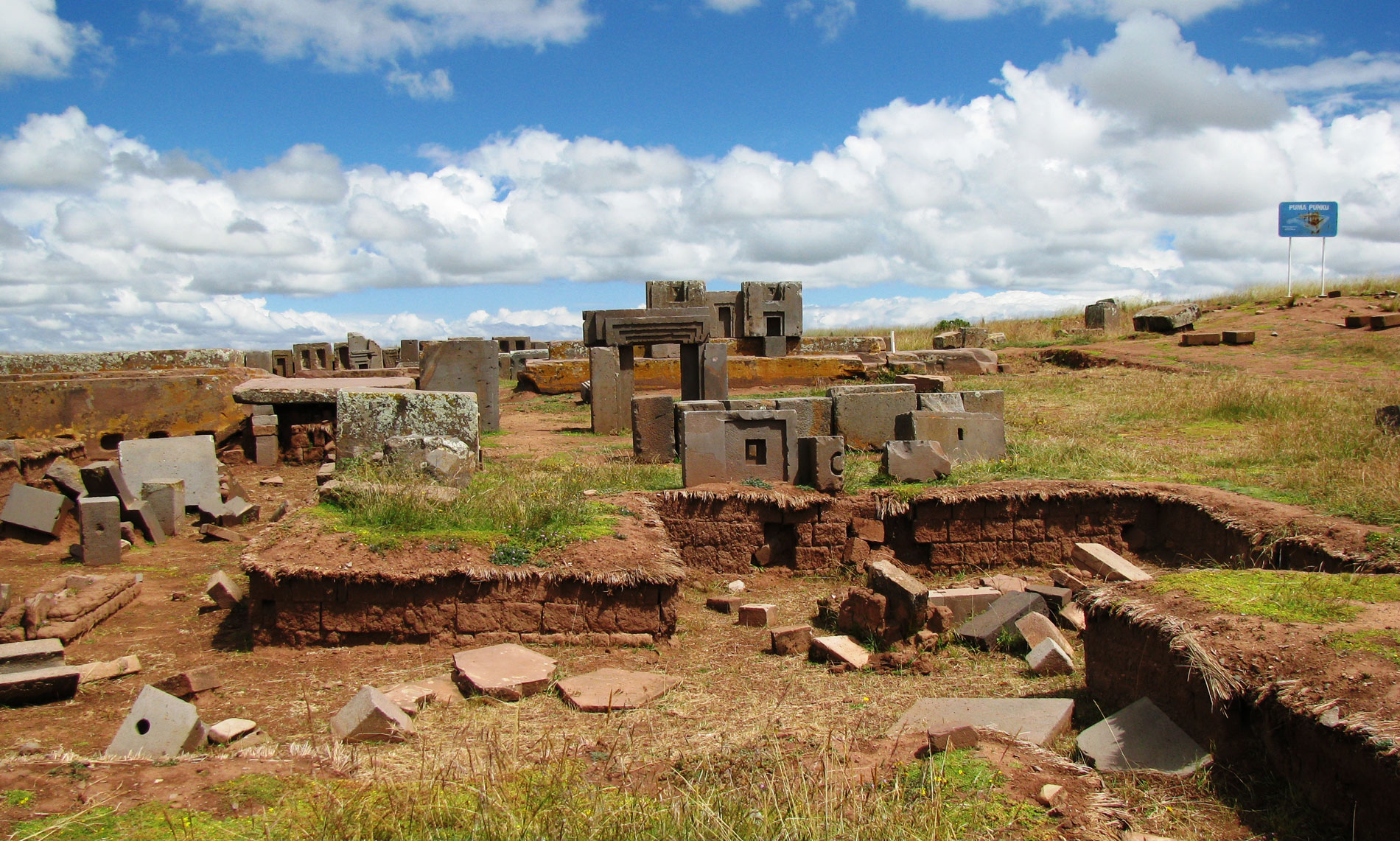 In the Andes all the mountaintop cities are quite impressive. But few places like Puma Punku, make you facing with indisputable vestiges of high technology.

Archaeological site of Puma Punku, near Tiwanaku or Tiahuanaco, Bolivia, near the border of Peru. Spread over a vast surface, rigorously cut blocks demonstrate a know-how and a hallucinatory precision. Who cut all these blocks? What purpose ? How long ago ? The size, so precise and regular, seems to have been made using modern machine tools.

According to archaeologists, they date from the Incas. They would have been carved a few centuries ago by Amerindians possessing tools other than rustic copper, golden or silver scissors. These metals, gentlemen archaeologists, are far too soft to cut these very hard stones, sandstone or diorite.

These same archaeologists do not have the slightest idea of ​​the use of these blocks, except their everlasting refrain: votive stones cut to honor the gods. You will see below that many models are repeated identically, with a realization accuracy of less than one millimeter and perfectly straight angles. All this with a copper chisel and for religious reasons? Tell that to a white horse, he will kick you, my dear mother would have said. 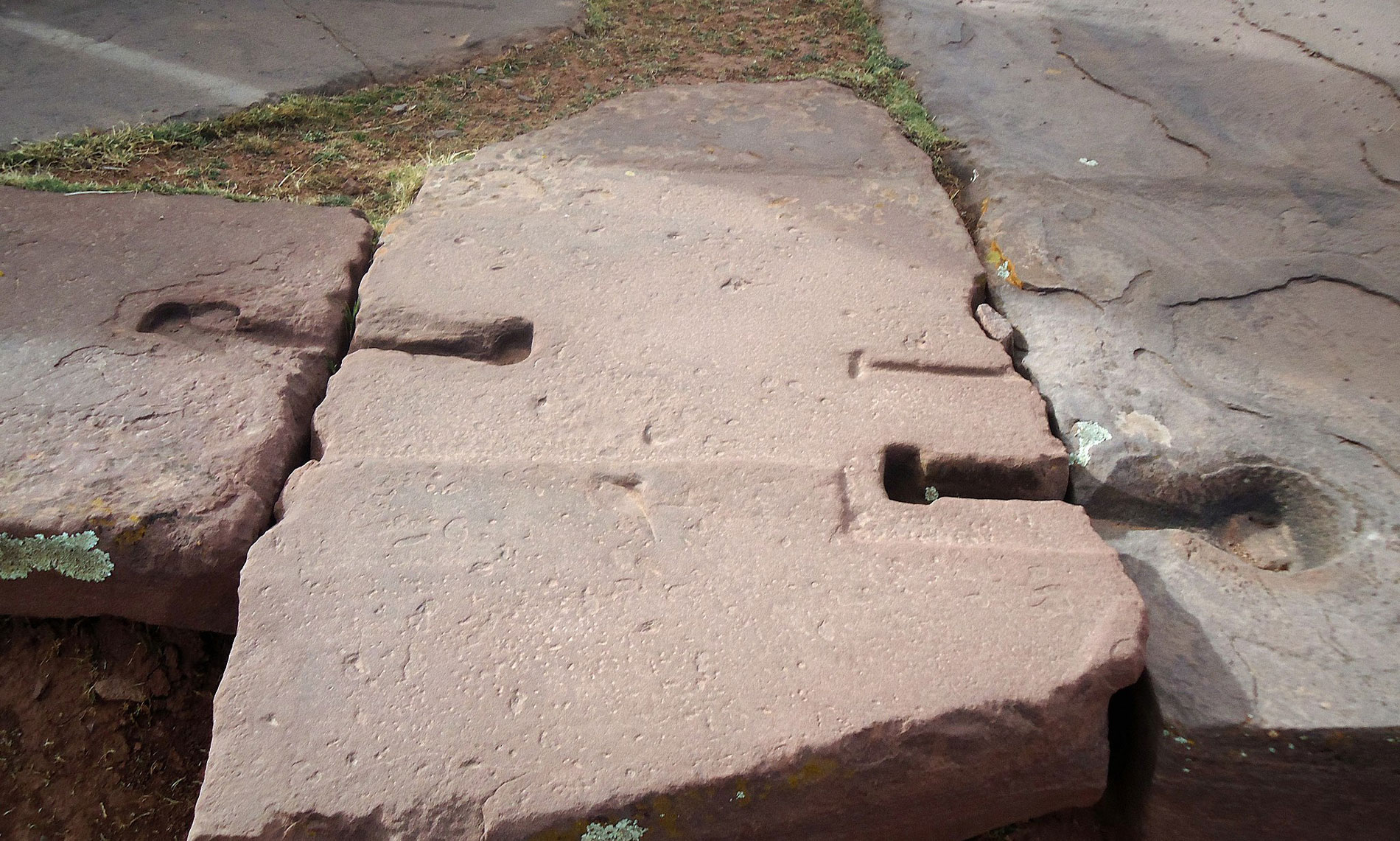 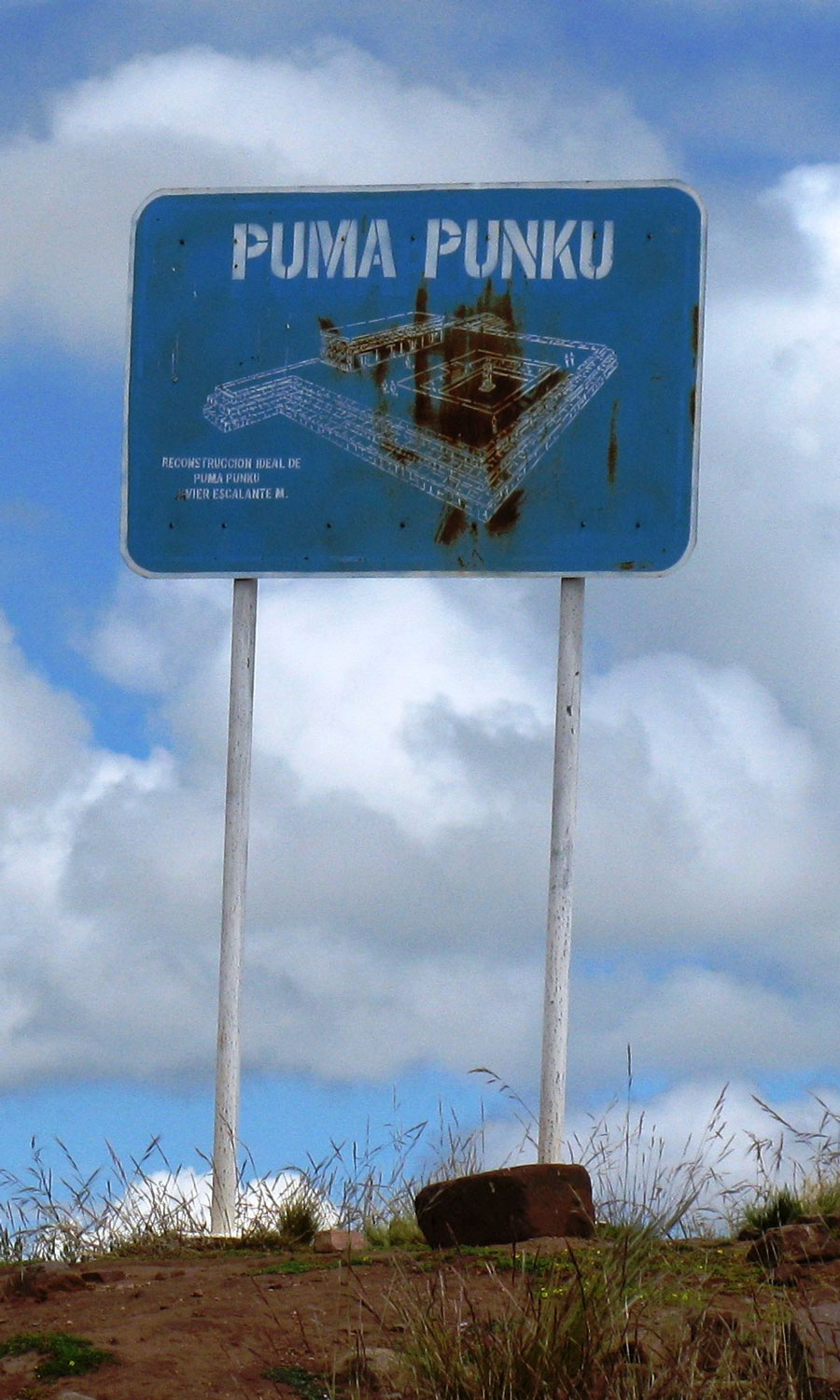 Opposite the overall plan of the Puma Punku site. A masonry platform, in which, without a doubt, were embedded the stones carved with geometric shapes? On these bases came metal machines, with probable glazed parts (dials?). It is the vision that this powerful place inspired me.

As for the image above, it shows an original mode of fixing blocks: stapling. It shows the location of staples or metal clamps. The metal of the staples has long since disappeared. In the best atmospheric conditions, its lifespan hardly exceeds three millennia. And it’s a safe bet that these gigantic cut blocks are much older. Infinitely more …

What I write here for them can only be bullshit. But what do they know? How can they be so certain, if not on the basis of their catechism: “we are and will remain the only developed civilization that has emerged on this planet. Shameless sufficiency of ants! It goes hand in hand with a total ignorance of these questions of which they pretend themselves without laughing the only reliable specialists.

The large Andean pruning stones are never assembled using mortar, but dry-set, possibly fixed by these metal cleats, or of such a weight and cut with so many ridges that they are self-locking. This is the case of all so-called cyclopean constructions. This name does not imply that they were built by Cyclops, yet this is the name given to them. There is a lot of wisdom in ancient names.

According to Greek mythology and the sacred texts of Hinduism, the Cyclops occupied this planet millions of years ago … not to say billions! There are traces of an intelligent presence so long ago … Even if Western archaeologists reject the possibility of such seniority for any civilization. Even less do they admit the reality of the existence of a human species so large, so ancient, with such advanced technology, and a third eye capable of launching deadly lightning …

Cyclops, according to the various planetary traditions, are the first mankind that has occupied this planet. We belong to the fifth. The size of the five mankinds is decreasing. These super giants measured more than fifty meters, we make less than two … The effort that the Cyclops had to make to build Puma Punku or Sacsayhuaman is minimal. Weaker than that deployed by an adult man to build a Lego house.

A question though. Why would such giants have built walls, palaces and doors adapted not to their size, but to ours? No wonder for me. Here, everything has been done for us. To our exact measure.

The Cyclops built for the following humanities. They are the first terraformers of this planet. Their reign took place when the Earth was still wild. They fashioned the mountains, carved the great rocks, dug trenches to deflect rivers, dried swamps, razed mountains to cut plains. But their hands were not skilled enough to plant seeds and work the land. That’s why their geneticists invented us. They built us homes and palaces. They have left the Earth in a much better state than we are going to leave it for future humanity.

We are the protectors of the beasts and gardeners of the big garden. Our mission was never to build roads for our dirty cars, nor to pollute the ether with our dirty planes. We were not mandated to make a seventh continent of plastic in the middle of the Pacific. At what point did we screw up, that I do not know. But we messed up. That’s for sure. 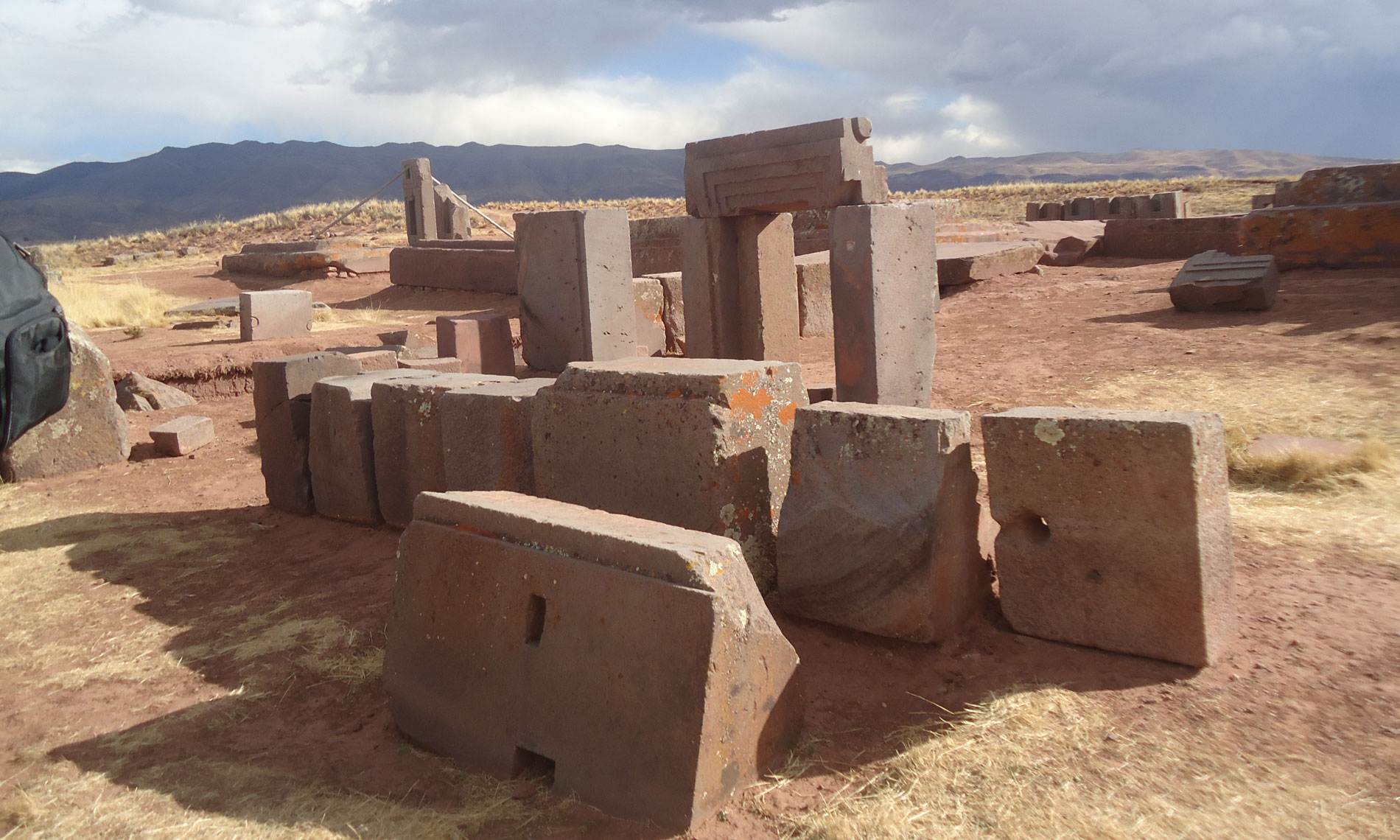 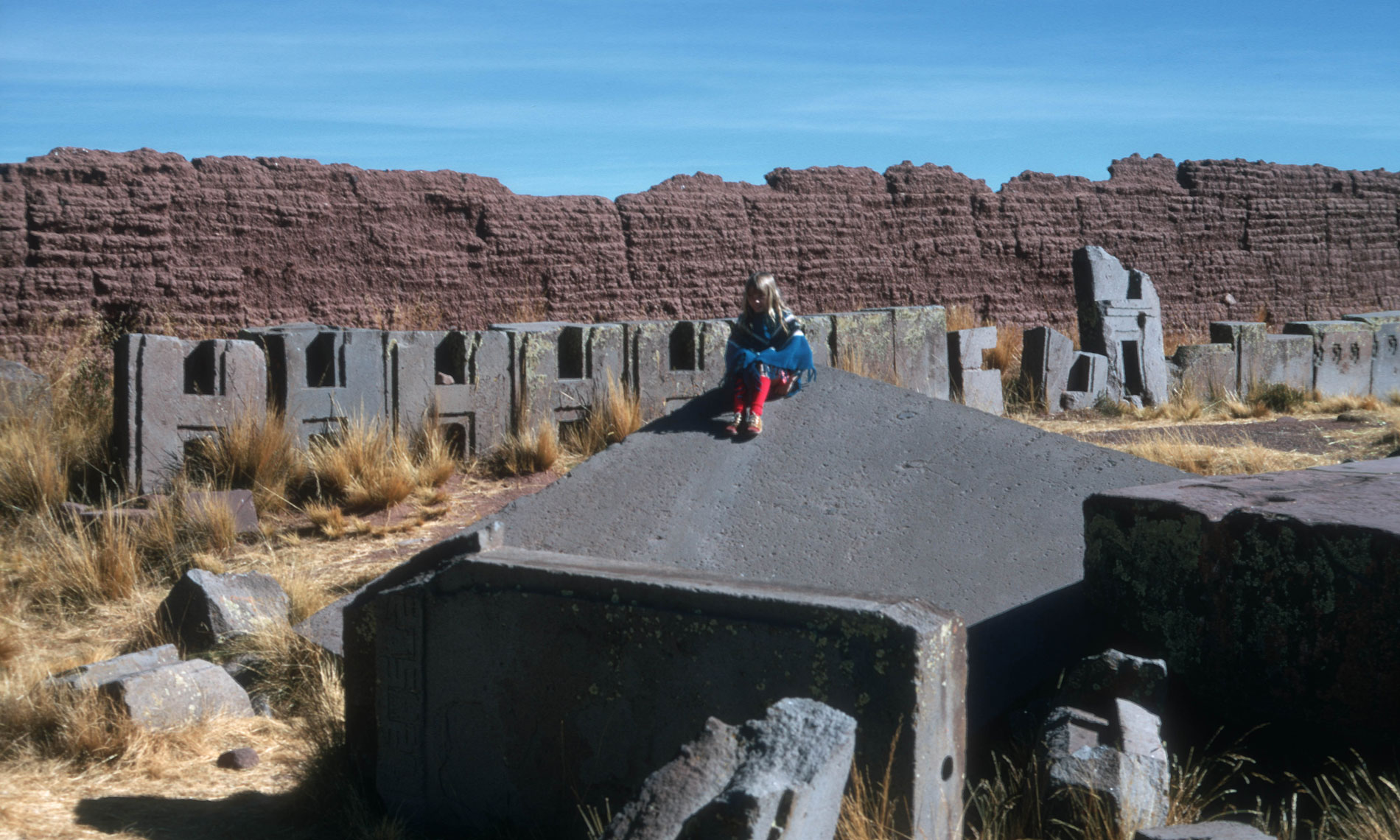 Archaeologists, at least those who have the courage to read me, must tear their hair in front of such nonsense. But it is not for them that I tell all that. Look at this picture. A sequence of blocks cut in H and strictly identical. This characteristic form of Puma Punku immediately evoked me bases intended for heavy precision machines. The machines have disappeared long ago, only the bases remained.

– Bullshit ! scream the archaeologists. These are ex votos, invocations, thanksgiving, a prayer in the sun!
That’s it. H like Helios, the sun … in Greek!! Smart guys! And the moon is made of green cheese … 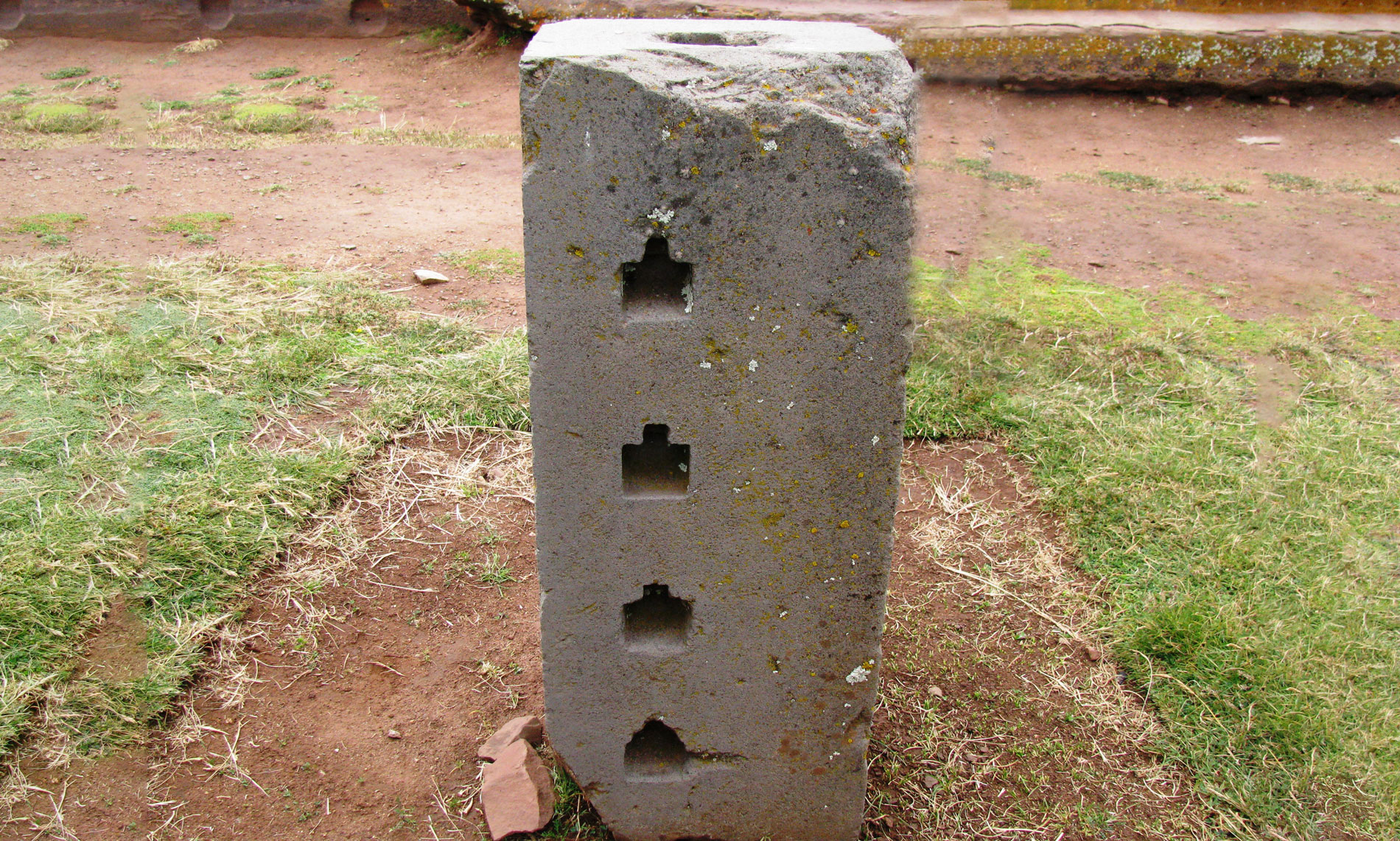 This pillar above shows precise cuts. For me, these regular notches were intended to accommodate metal parts. Again mechanics oxidized by eras. We find the same pattern on the following photos. 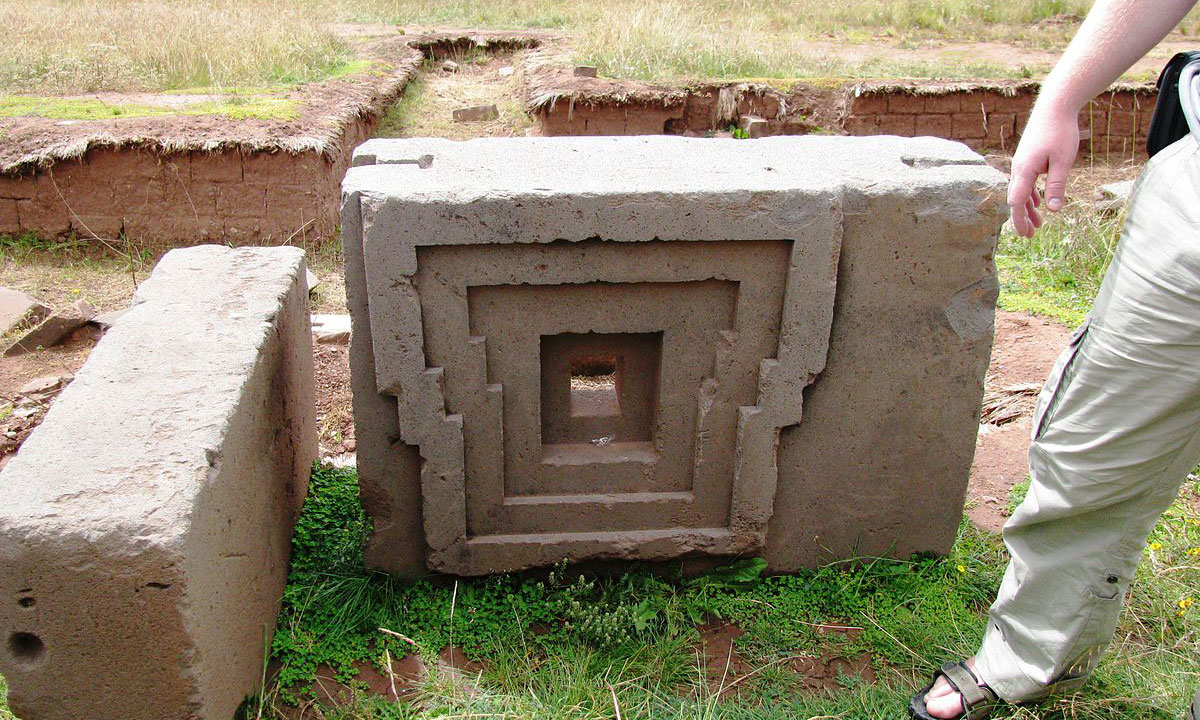 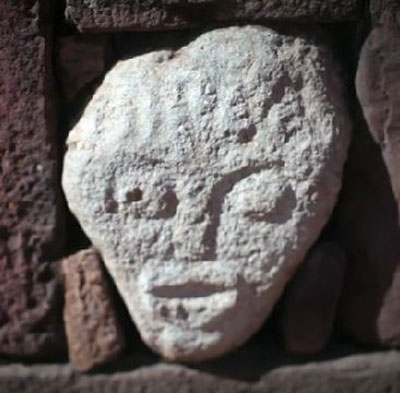 Opposite, we recognize the face of an alien of the gray type. These faces closer to the robot than to the organic being are one of the oldest known petroglyphs, like those of Australia. They are also found in the Andes, as here. And in the caves of South India and the Himalayas. And in Western Christian religious art, as in the art of the orthodox icon, as in Gothic cathedrals’ stain glasses, etc.

Here the big, almost negroid lips are a particularity worthy of being underlined. Usually the lips of Grays are almost nonexistent, their mouth being limited to a simple slot without hem.

It should be noted that the sculpture work is much rougher than the base blocks. Must we conclude that the work was not done by the same sculptors? The stone of this face, softer, may very well have been carved with a copper chisel. A hypothesis: what if the sculptor of this gray alien face had wanted to show posterity what those who cut all the other blocks looked like? 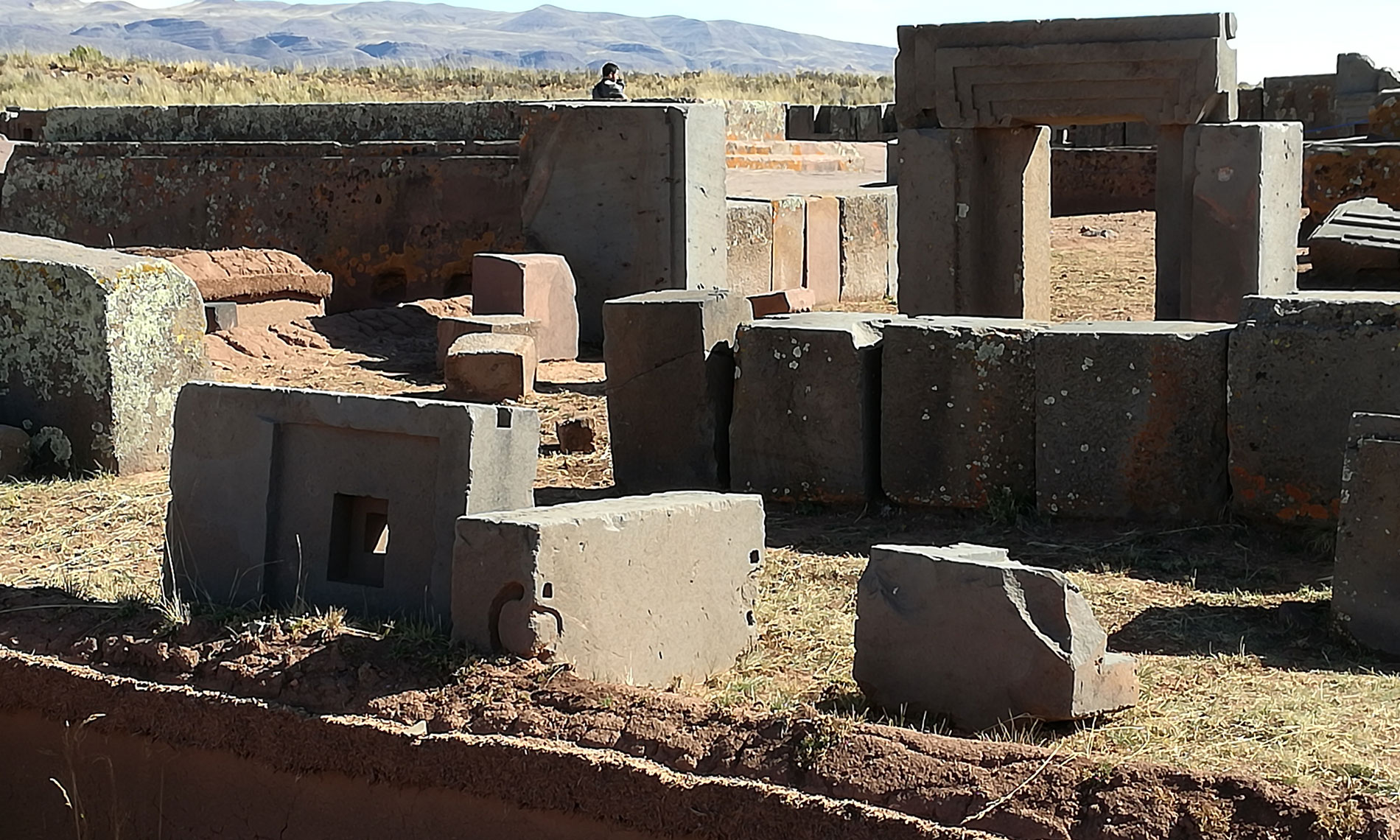 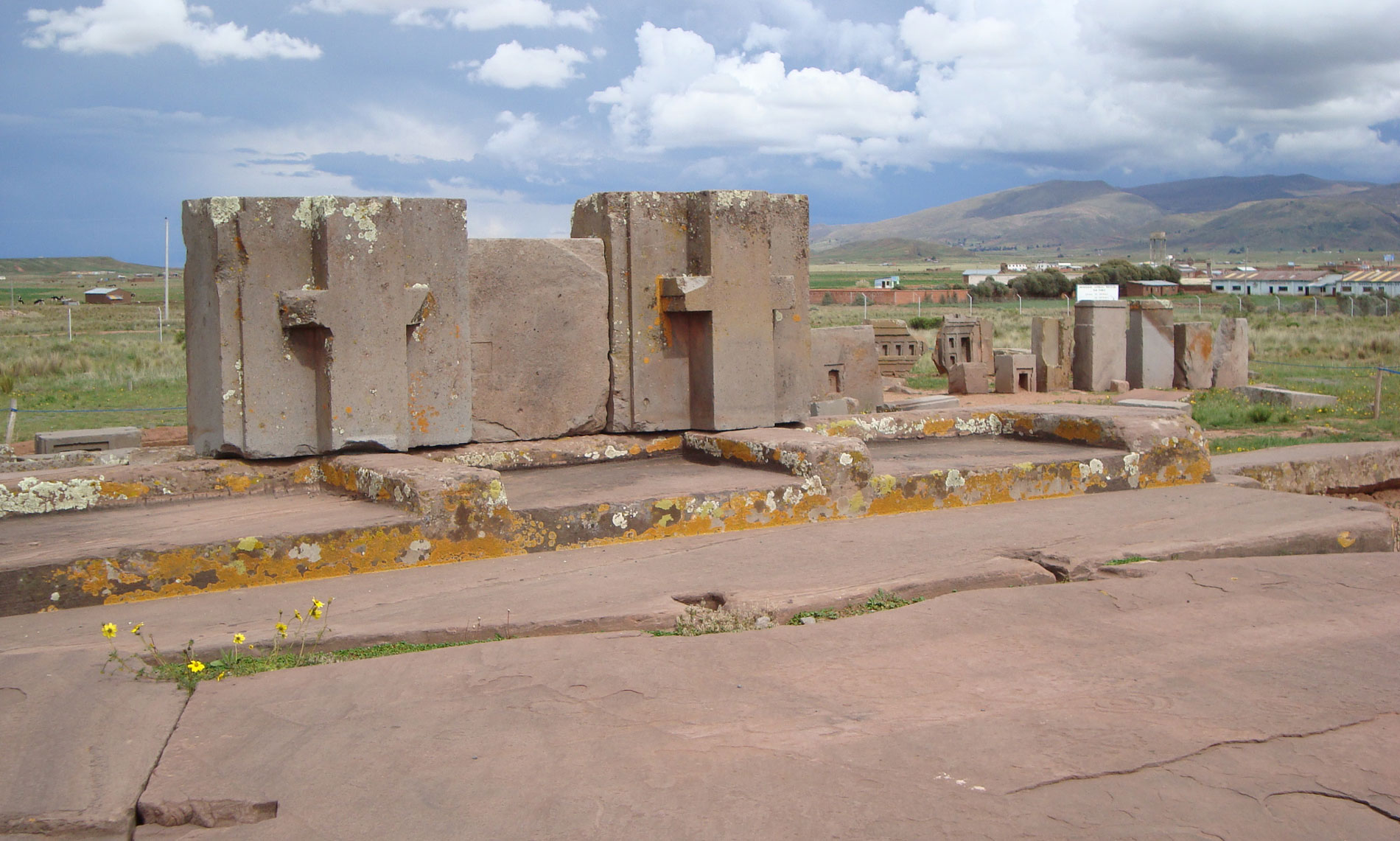 Archaeological excavations are regularly undertaken on the Puma Punku site. Below, a search campaign in 2011. By dint of digging and widening, will archeos eventually understand that they can not get anything? Same for us, to be honest. But everyone is entitled to make assumptions. They can not be more stupid than those of professionals.