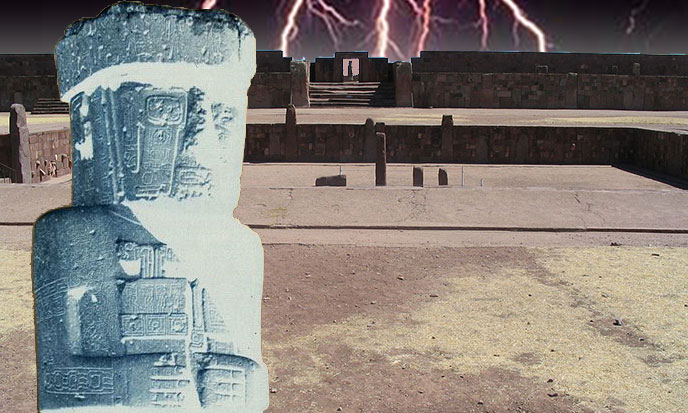 In Tihuanaco, City of Gods, there is a monolithic arch called the Sun gate, which would be better named Gate of Lightning. A curious legend tells how the lightning struck 107 times one night to finally break the monolith.

They say lightning never falls twice in the same place. This is almost true. Can we say that the lightning falls? Lightning is an electric arc between two terminals, one positive and one negative. The lightning does not fall from the sky, it connects the earth to heaven. When there is a storm in slow motion, we find that each flash is preceded by a tracer, ie an electrical connection that traces the path of the future flash. The tracer acts as a cable. Once the ground is connected to the cloud by the tracer, the flash can act.

It is therefore wrong to say that the lightning falls. Now, why can’t lightning occur twice in the same place? To provoke a lightning discharge, just a difference of electric potential between two points is enough: then occurs the electric arc of lightning. When a point is struckAs they say! by lightning, it loses its whole electromagnetic charge, and therefore cannot attract a second flash. So why this storm “on orders” and 108 flashes on one monolith? And why did the lightning cease when the monolith was broken?

The right question is not why, but how. The monolithic door was designed in that purpose … When the whole lightning power plant was in operation, some ten thousand years ago, the site had the ability to attract lightning endlessly.Just as the House of Sky of Avebury The sun gate was used as antenna or sensor: a lightning conductor of polarized stone, rendered conductive by gold rods or cables, which reloaded in the rock of the mountain after each flash, in order to attract another one. 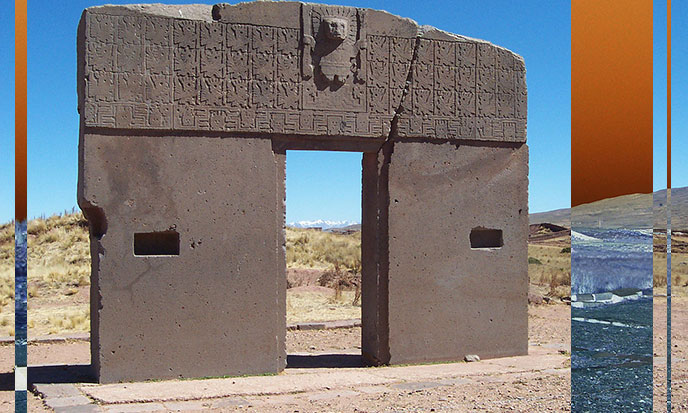 But the last Atlantean engineers, before abandoning the site, could not leave unchanged the lightning pump, which in normal times, was running endless.

The Atlanteans knew that if they left the site unsupervised, their lightning catcher would be dangerous. They defused the site by laying down the door, like our engineers close down the nuclear power plants when they are no more useless. When this US great man decided to straighten the sun gate, he gave it back its original function and the lightnings rained down on it. But the door was probably not in the same place as before, and especially, the monolithic transducer was no longer connected to the spark gap.

The spark gap was used to transform lightning into ball lightning. The captured lightning being no more relayed nor fragmented, the monolith has not held … The scene took place several millennia ago. Neither the Incas nor the U.S. engineers are at its origin …

The reversed lightning conductor, ie the lightning sensor as we just described it, also exists on the other roof of the world, the Himalayas. “In 1966, I visited the Himalayan valley Koulou. Koulou City has on a hill a remarkable ancient temple dedicated to Shiva, near which stands an iron pole eighteen meters high. During storms, this pole attracts “the blessing from the sky” in the form of lightnings that traverse the pole and strike at its base a statue of Shiva,

which fragments are then reassembled by the priest to serve for the next “blessing”. The custom has existed for immemorial times, which indicates that India has known electrical conductors for immemorial time.“(source)Andrew Thomas, We are not the first, cited by David Childress, Gods’ Technology

The same author found in an ancient text instructions to manufacture batteries: “Put a clean copper plate in an earthenware. Cover it with copper sulfate, then with moist sawdust. Then lay a sheet of an amalgam of zinc and mercury over the sawdust to avoid polarization. The contact produces an energy having the double name Mitra-Virouna.That is electro-magnetism, also called Vril energy. Through this power, the water disjoint into PranavayouOxygen and Oudanavayou.Hydrogen We say that a chain of hundred jars produces a very active and effective force.” (source)Agastya Samhita, quoted by Andrew Thomas, We are not the first 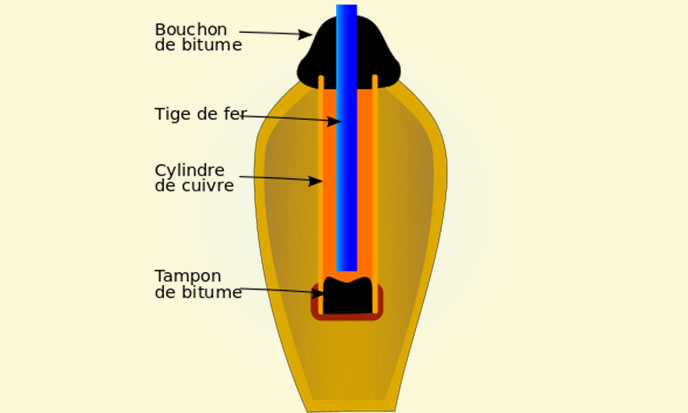 The electricity was known and used for a very long time, and the use of batteries is probably a relic of a more ancient technology, that of the lightning temples. Jerry Ziegler says that different types of electrical devices were used in the temples, and he assumes it was to make believe to oracles or terrifying manifestations of God,(source)Jerry Ziegler in “YHVH” and “Indra Girt by Maruts” which is probably true for the period of decadence following the flood, when the former science has become magic for the survivors.

But originally, these electrical devices fulfilled three functions that had nothing symbolic, nor anything of a special effect for suckers.

An examination of the rest of the site shows stone troughs which formed lightning channels. The stones, polarized as the menhirs of Avebury, were filled with water to form a power line much cheaper than the menhirs of our Western lines. In Europe, the energy was channeled through the rows of menhirs with alternate polarities, which make perfect power lines.

Elsewhere, when the menhirs or pipes were proved impractical, for transmissions over long distances for example, simple beds of pebbles arranged in earthen levees could perform the same function. It looks like dikes. The Wansdyke, which passes near Avebury (Wiltshire, UK), is a perfect example of it