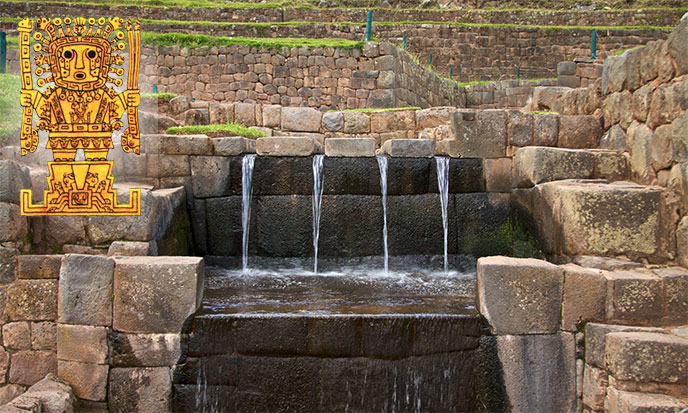 Tipon is one of the most fascinating archaeological sites in Peru, 25 km from Cuzco. Prehistoric importance of the site is well established, its construction began around 6000 BCE.

“What makes Tipón an interesting Incan site is the sopisticated water distribution through the agriculture terraces, water running through stone-lined channels and out spouts to different levels and parts.” (source)

It is no coincidence that the garden city of Tipon is the heart of the Sacred Valley, where are concentrated are all inherited wonders of a very ancient civilization, that of a great people that the Incas called the gods.

Here as in other sites of the Andes, the Inca architecture was superimposed on a Cyclopean architecture.

The Inca Empire once occupied a vast region centered around Cuzco, the capital. It was prolonged in some areas of Colombia, Ecuador, Peru, Bolivia, Chile and Argentina. It was the largest empire in pre-Columbian America.

“The Incas were skilled engineers and skilled craftsmen have built a network of roads linking remote provinces of the empire, as well as water collection systems to harvest, with separate canalisations for rainwater, natural sources and waste water. Nowhere has this technology been more beautifully preserved in the former site of Tipon.” (source)

One may wonder whether this excellent state of preservation is not evidence of a restoration carried out by skilled craftsmen Incas, which would have been happy to reactivate those very ancient facilities.

The practice is common: in Egypt, Khufu did the same with his pyramid.

Water supply tunnels were drilled through the mountains to bring water from several sources. The tunnels turns into penstock, gentle bends to modulate the flow, while expressing the utmost hydraulic science and irrigation techniques of the builders. But is this really the Incas who built all this, or have they been content to hand the hydraulic system in operation? At the highest point Cruzmoqo, who was a military post and a sacred place, mysterious petroglyphs dating from 2000 BCE decorate the volcanic rock. (source)

Everywhere, behind the city as the dominant archeology attributed only to the Incas, the watchful eye benchmark details that need them nothing. In my opinion, the entire hydraulic system is one. It was perhaps restored by the Incas, or just kept as it has been since by indigenous populations.

But it was designed by bearded white god Tiki Viracocha, who had it built by its giant angels in a very specific goal.

“Tipon dates back thousands of years, but its most impressive development took place there about 500 years, at the height of the Inca nobility” (source)wikipedia say archaeologists. I doubt it. 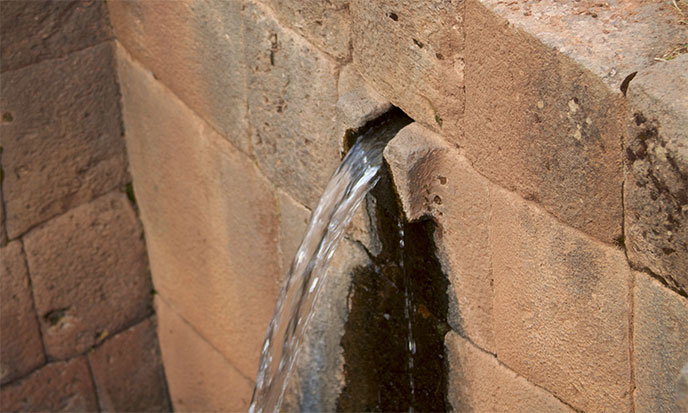 While the Incas were skilled, but they lacked the scientific and architectural mastery sufficient to design such a hydraulic diagram. Moreover, they did not have appropriate tools for achieving these holes and tunnels that seem much older.

The carbon 14 dating is impossible for stones, thus archaeologists use other methods to determine the age of a building, like dating by pollen.

This method also has its weaknesses. Dating pollen on a stone does not give the age of the stone, but the pollen’s age. It could have been deposited on the stone long after construction.

That is why there is reason to challenge the dominant dating retained by archeology.

It is as if the truth was scary. True, it is disconcerting, and so unlikely that the official seems plausible lie beside her.

According to legend, Tipon was originally one of the royal gardens with Tiki-Viracocha, the supreme God of the Incas. Once again, the legendary source seems more reliable than the dominant archaeological source. 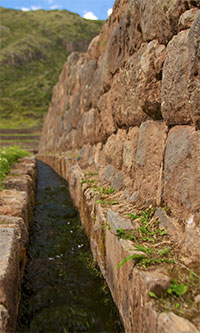 Here is what I see on this site: the true Garden of Eden. Let us not forget that Tiki and Enki are one single Anunnaki god. When Enki was driven out of the Middle East by his brother Enlil, he left his estate “on the other side of the water.”

For me, this is where he came. And the ancestors of the Incas known as Tiki.

To mark the splendor of his reign he had built the cities of Andean peaks by these angels who were flying giants. This is the technology, not the wings that made them fly.

Among these cities, Tiki Enki wanted an elected city, the Heavenly Jerusalem, for his personal residence. He traced the plans of Tipon on the model plans of vessel-island Atlantis.

Tipon is Eden, the earthly Paradise, the Tlalocan or the abode of the gods. Some authors such as Anton Parks believed recognize the Eden of Enki in the mountains of Turkey. (source)Anton Parks, Adam Genesis

At the point he identified, we find no vestige of a Cyclopean city, or even the remains of more modest constructions. It’s nothing. And this is the problem of Anton.

Paradise of astronaut gods must necessarily leave traces. The traces are obvious here. In the Andes.

The Encyclopedia of Assourbanipal exactly describes this city. So did we thought it was in the Middle East. Fatal error! Consider this Tipon, solitaire diamond set in the Andes, see waterfalls, terraced crops, irrigation system, see lightning traps which follow throughout the Cordillera and read this:

“Ninhursag spoke loud and clear:” My plan will succeed us wonderfully, she said. We will install a water trap with a broad tank. Sip of water, the earth will be generous and abundant food. This perfect Eden will capture water from the sky and the upstream distribute two rivers waterfalls. At the top of the rock, we must build a temple thunder.

The Snake Lady was moved to tears. She already imagined its vast warehouses, her house with its garden terraces. A blessed house of heaven, as it would be located on top of a peak. She spoke of irrigation terraces that should develop, the birthing it would build in height, with a rest room for mothers. She ordered it to create irrigated garden and to plant large trees. She asked a soil test to determine which crops to it.” (source)Extract from the tablet 1 Kharsag, translated by Xavier Séguin from Don Moore

Ninhursag is an Anunna princess, entirely devoted to the prince Enki. Her description is eloquent. It is a garden city, lavish and exuberant probably originally. The Snake Lady resides there with her nurses, geneticists and gardeners. And her lover Prince Enki stayed there with pleasure.

The traces are here in the Andes. Just take a look. It is a garden city, ostentatious and undoubtedly exuberant originally. The bearded god Tiki lives there in shocking glitz and lust that is not less.

As in Atlantis, as on Hyperborea, Enki maintains a harem of young girls and boys. “The gods are always thirsty, have never enough And it is love always love again” (source)Brassens, or nearly

The decor is perfect for that.

Besides beautiful ceremonial halls, Tipon has channels, pools and ponds in number, aqueducts, fountains and other structures that exhibit an immoderate taste for the water games and a great mastery of hydraulics.

This is a superb site to cultivate a secret garden, a courtyard of love: Tiki Viracocha Garden of Eden. Vast horticultural terraces are stretching to the flank of the mountains, with a sophisticated irrigation system that is still working. In this heavenly kind, Tipon is unparalleled on this planet.

Eden of the Andes got thirteen terraces lined with polished stone walls, once occupied by an exotic and lush vegetation, with fresh water canals and ornamental waterfalls. Various pools are fed by irrigation canals that still work today.

The size and mass of stone blocks that make up this wall, as well as their assembly, clearly indicate that it dates from well before the Incas.

To those who may be surprised to find Eden on the other side of the Atlantic, while all descriptions, all sacred texts say that the Eden is in the Middle East, I will say this. There is a common phenomenon in terms of legend, I called relocation.

When people inherit a legend that happened elsewhere in ancient times, it tends to substitute other places, most familiar to him. These new places, he chooses in his immediate environment. 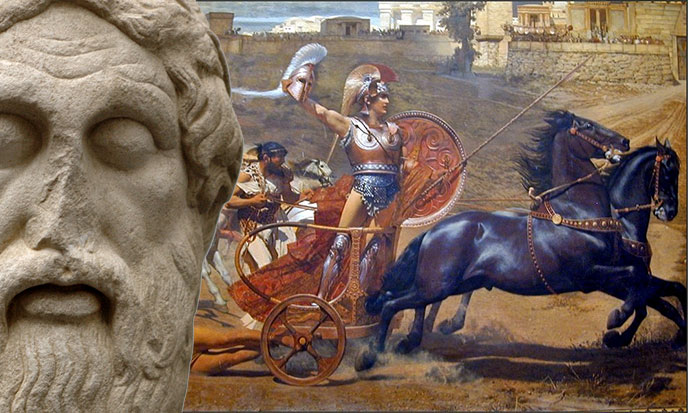 This phenomenon is not rare: all civilizations have done the same with foreign legends, to link them with their people. In the case of India, it is a success. Rama is chiefly known due to Asia, since westerners have forgotten everything about him.