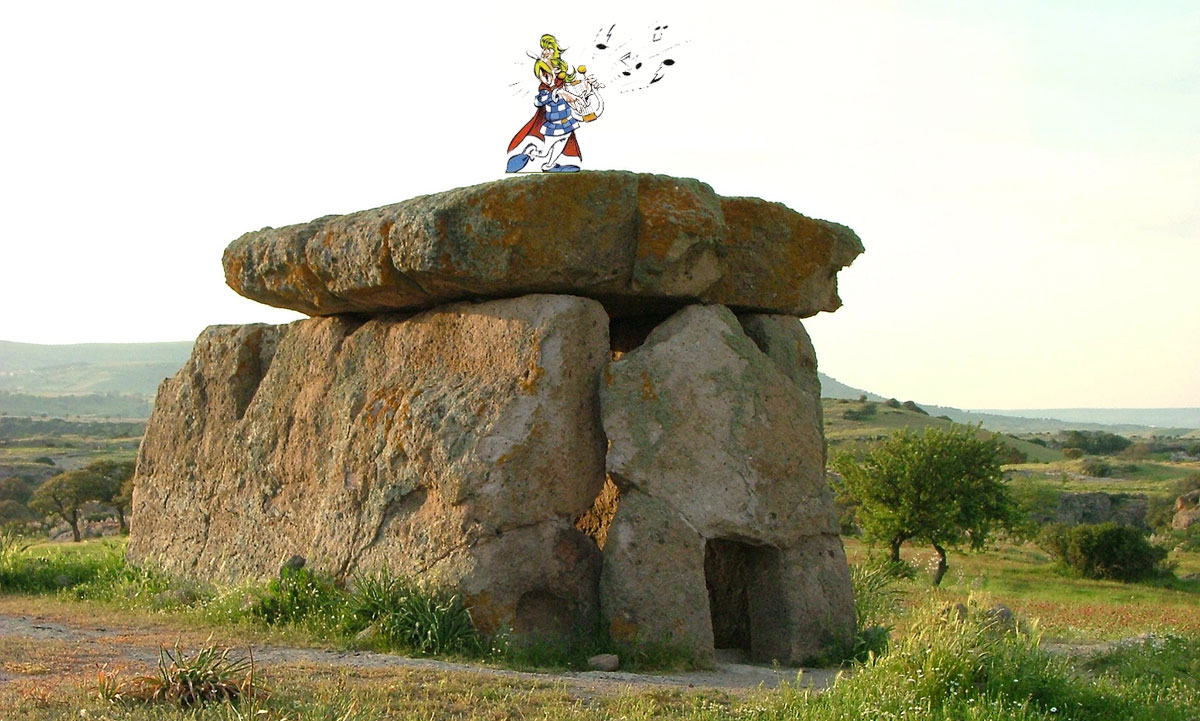 Ivesus is the original model of the Breton Saint Yves. In a distant antiquity, at a time well before Saint Yves, Ivesus / Yves Esus was the patron saint of pagan miracles. Ivesus is the previous Christ who protects our Romanesque churches with his sacred tree, the yew tree,“if” in French as in Yvignac-la-Tour, an old medieval and masonic church, where the watchtower hides a venerable yew that welcomes you into its heart.

White Brittany of ancient mysteries, druids and legends, dark Brittany of leprechauns and korrigans, Margot and Morrigan fairies, black Brittany of spells where Yann An Aod — Ian of the Shore — and the wolves of the Monts d’Arrhée make funeral procession to the transient traveller. Such is the bewitching setting that saw Ivesus born in times unknown to memory.

Yet many places in Brittany still bear his sacred name. Best-known are in the Côtes d’Armor : Yvignac, Yffignac, Yffendic, Pontivy — both yew and ivy celebrate the cult of Yves the Elder, Ivesus the Forgotten.

The Copy and the Template

Attention, when I say that this Yves is well before Christianity, I do not confuse the copy and the model. The copy is the official Saint Yves, whose Wikipediachampion of ready-to-think tells us this:

Yves Hélory de Kermartin, aka Yves de Tréguier aka Erwan Helouri in Breton aka Saint Yves in the Catholic tradition, is a priest from the diocese of Tréguier, probably born around 1253 in the manor of Kermartin in Minihy, in the Duchy of Brittany, and died on May 19, 1303 in the same place.

Considered by the Catholic Church as having dedicated his life to justice and to the poor, he was canonized on May 19, 1347 by Pope Clement VI. Saint Yves is the patron saint of all professions of justice and law, especially that of lawyer. He is also patron saint of Brittany and is the object of a great pardon on the occasion of the feast of Saint-Yves every year in Tréguier. It is celebrated on May 19. (source)

Brittany of mysteries, I said? Being Breton all right, nevertheless this mystery is fake. Duplicates are common among former gods, Greek heroes and biblical patriarchs. They were models that are still revered by giving their names to newborns. Among the southerners who call themselves César,Caesar none is Roman general. In Latin America, Jesus is a very common name. Will any archaeologist of the future confuse one of these beautiful Jesus with that of the Gospels? This very Jesus might not be a son of God, but at least he will have existed. 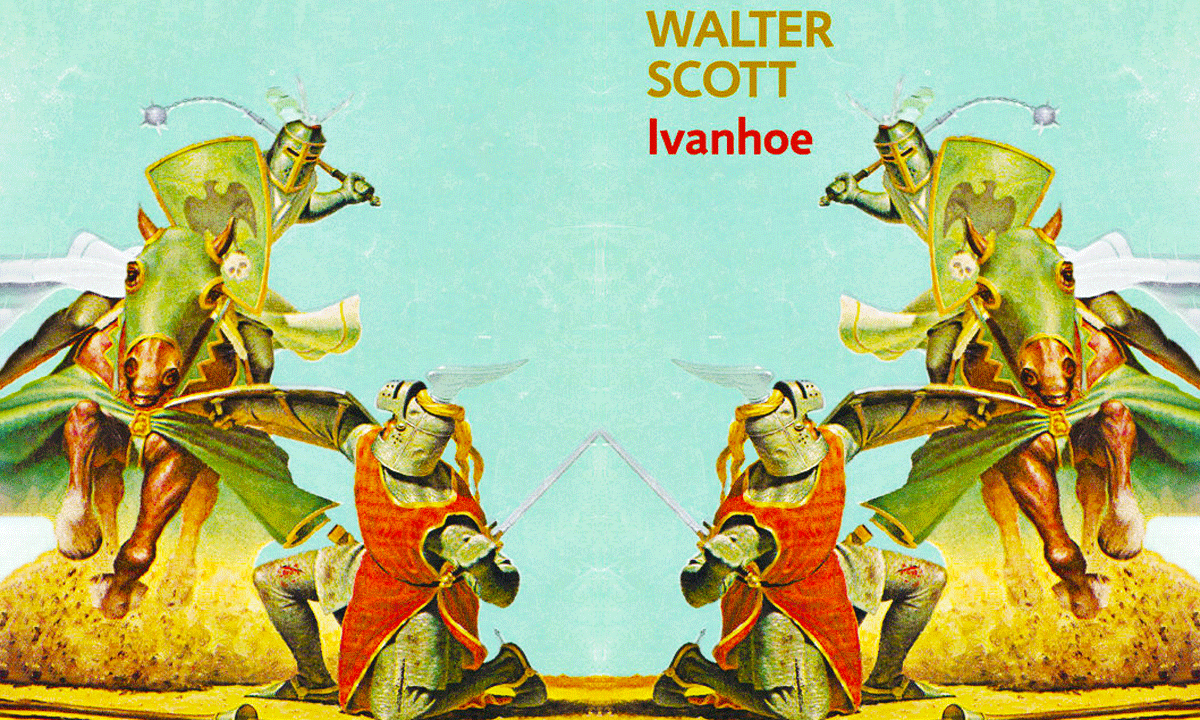 He is called Esus. Or Ive. Like Ivanhoe/ Iv(y) Ahn-Oe. Ivesus is Mithras for the East, the Mediterranean coast of these distant lands where the presence of the ancient Celts is still tangible. Ivesus has left songs. Antiphons. Canticles. Psalms. Prayers without rhyme or reason. Some of them mysteriously surfaced from the limbs of the universal mind. Here they are.

Song of Christ the Sun

Mighty sun, always victorious you who make our children grow on your five continents
Our Father in heaven, in your paradise guarded by your heavenly armies

Sun of love you have raised me to your shining horizon
You brought me into your light
On your green meadows I walked
In your sumptuous orchards I tasted the golden apples
Locust beans, bearded figs, grenades and persimmons.

Victorious sun, heart sun, may your virtues be sung by a choir of a hundred thousand virgins
And so many boys before the moult, with the voices of angels, with wonderful treble.

I keep hearing them all the time
Quat’ sous4-pence make a dime
Could a finest melody be heard when sung by such sublime voices
Whose juvenile sound entered my heart and remains forever. 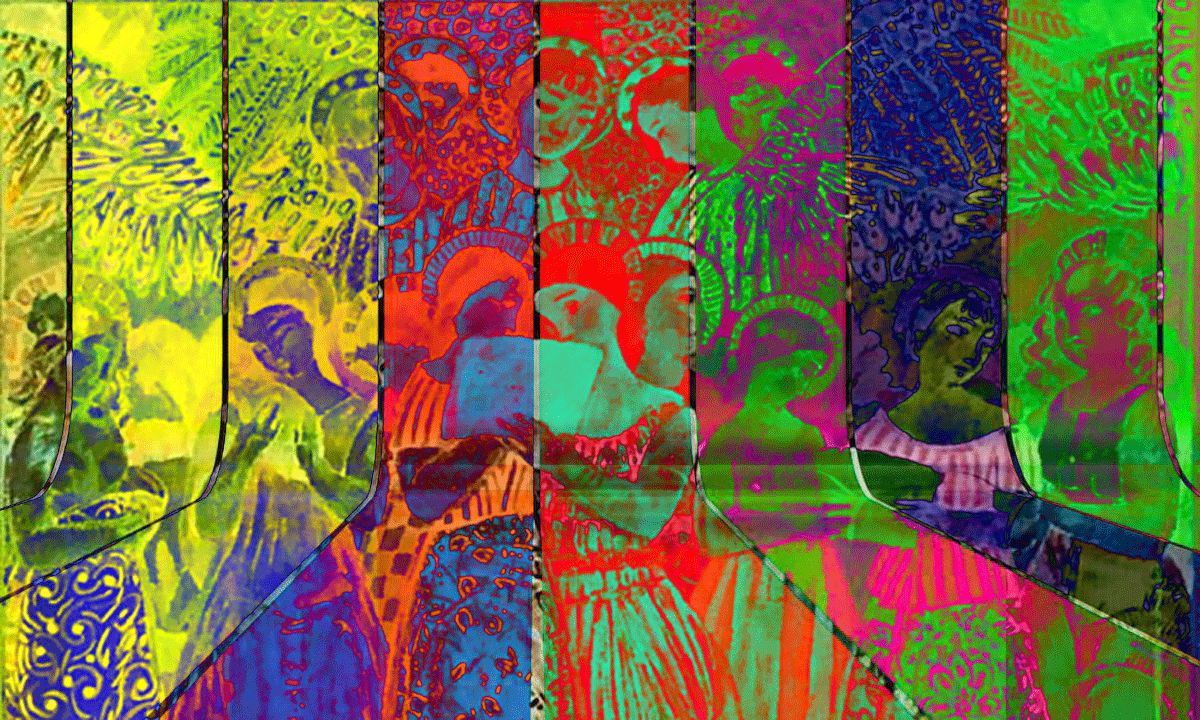 Ivesus
Now time has come to mourn the mourning of the good days
Autumn after so many winters here comes the circular time
All things planned are accomplished
And so many others too
Only I remain without a soul, without a friend
My grey head and I till the time of year
To the port

Ivesus
Behold, I love and am loved. Cast away anger and fear
The power and the circled cross protect our world
And Alcor’s and the fate of our dead
Come the sweet forgiveness of the tortured
Of the forgotten insult of the torment inflicted
Disfiguring my heart with a seal of unworthiness

Ivesus
This is the end of the tale.
Wolves roam around the houses
The hollow paths are full of mist
Liha of the Moon and Song
Through the door of the Dead returned to Terra
Enchant the children of the Sun
Naked as on the day of their birth
To be reborn like her.

Song of the Council of the Sons of the Moon

Become your father, become your mother
Become your son and daughter
Be your family
Become your own clan
From the old you mourn
The new one is about to be born
The new master in you at home
You obey

Human Council of the Moon Sons
Do not expect of me any grace
You’ll pay up to a penny
Any violation, offence or crime
Committed knowing the cause
In the land of People and Things

Dad, you’re so old and wrinkly
To love the gods too much you are no less human 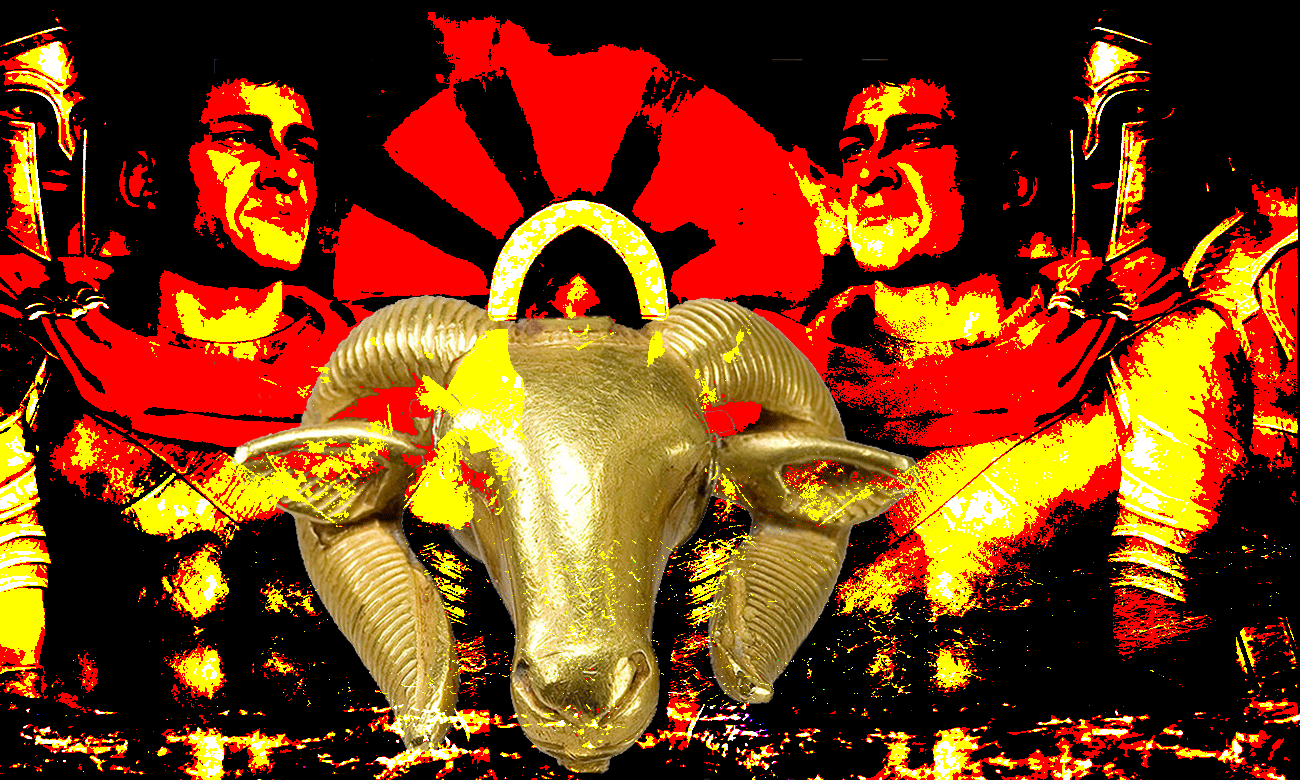 Song of the Banks

Those moments that often
Awake in my growling heart
Memories from before
Total death before the end of the worlds
Before it’s too late
When all could last
A year, a century stretched by
The energy of despair
The hard golden desire
To endure
To the edge
Of a new day

May it then last forever
Residence permit
For the day of help
As a last resort
The day you got back.

That’s where the loners slept
The five orphans the five brothers
Companions in solidarity
In a post-war setting
The city is down.

The mud in the river
Blood in the dust
On the Chemin des Dames
Mass grave that clamors
The killings of yesterday
Cowardly or proud
Death takes you the same
When you wake up. 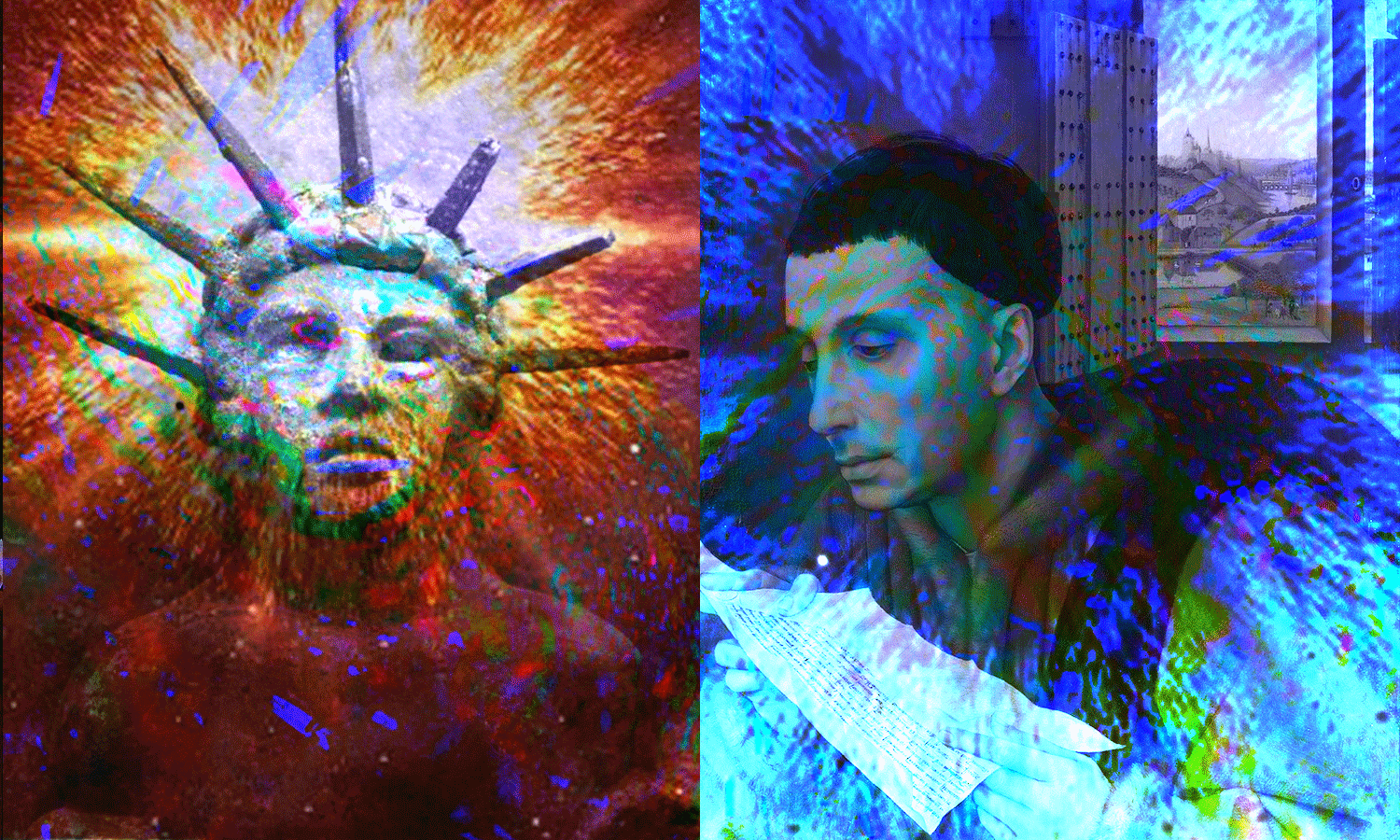 I camber myself on my kidneys
To spur my courage
And mobilize resources
Of my vital energy.

I take my flight arched
On my growing bronze kidneys
The whole building up.

Up I fly and fly
The country that saw me born
The shore I grew up on.
My past through the window
Of a heavy spell
Renew and steal from me
A gift you can give
A future I’ve been told about.

Anne ancient and strong queen
Back to us
The daughter and sister
Mary with a big heart
The light grey eye, the proud gaze
Of the heroic warrior
Marianne their heiress
Carry in this big heart
The sweetness of the great queen