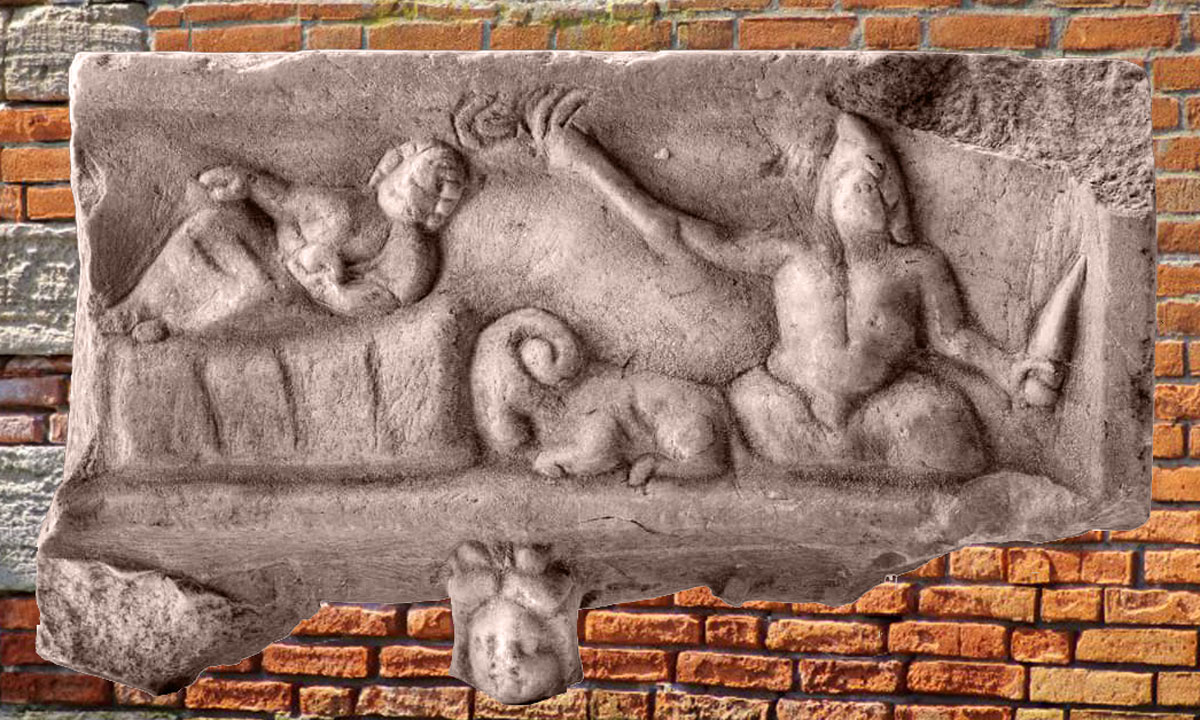 Many scholars are questionning the historical existence of Jesus. But that of Christ is well known. Such a title was often worn: Prometheus, Orpheus, Dionysus, Apollo, Rama, Esus, Mithra, all were christs …

If Christianity had been arrested in its growth by some mortal disease, the world would have been mithraic. (Ernest Renan)

More than one christ have reigned over the Celtic and Mediterranean world since the dawn of time, ie long before the Roman Empire. In the golden language, Mithra can be written mit Ra, ie with Ra. In the language of the goslings we can spell myth (of) Ra.

Ra or Rama is but an avatar of God Mars who was called Esus in a good part of the Roman Empire. God Esus whom the Britons call Saint Yves. He was not a saint in the christian sense, because he has been living long before the beginning of the religion of Jesus. Never mind. The britton firstnames Yves, Yvon, come from this saint. The Russian name Ivan can be read IV AHN in golden language, namely YV the ancestor. In Brittany, the towns of Yvignac la Tour, Yffignac and Yvias are dedicated to him. 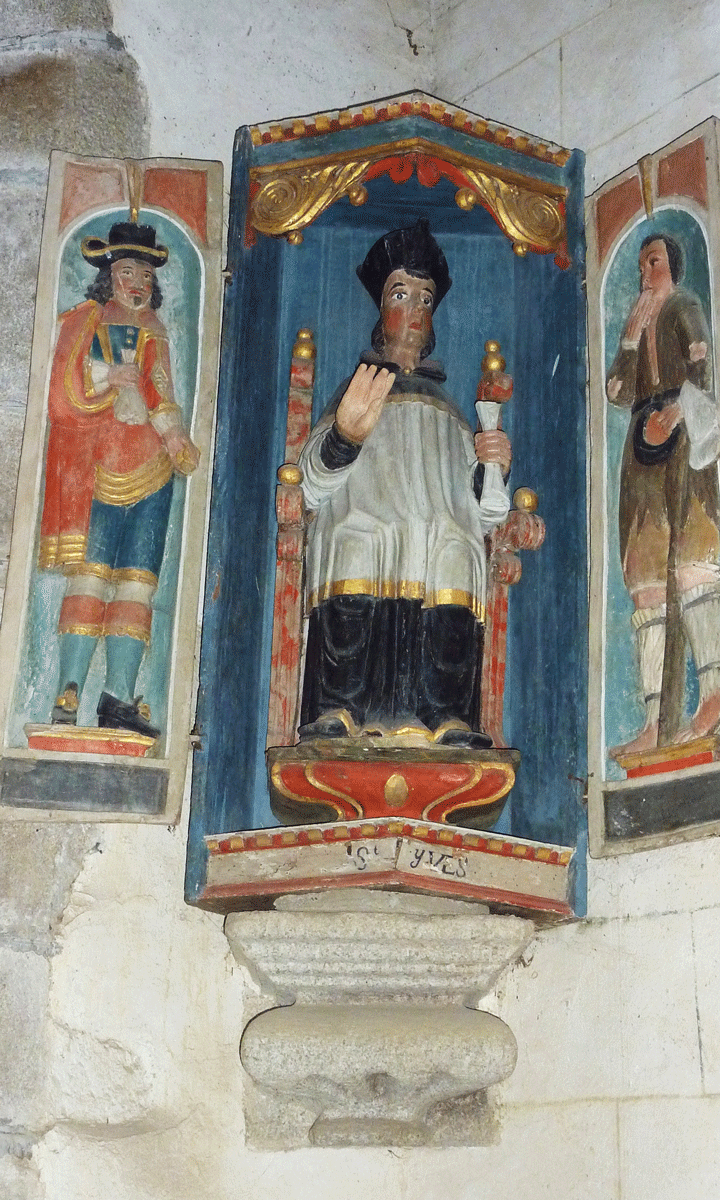 As well as Lanleff and his temple. Characteristic of the Mithraic cult, adjective that I prefer to the ancient Mithraic, this circular temple is probably anterior to the Roman conquest. Still in Brittany, the root ESus is found in the city of Essé, country of the beautiful covered fairway of the Roche aux Fées. Fairies, really? Or Esus Christus ??

Does the god Esus belong to the great family of Aesir gods who reigned over northern Europe? It is worth asking, but uneasy answering. The lexical kinship makes me say yes, so does the time, same for both … If I can say that Aesir Thor is the male counterpart of the Egyptian goddess Hathor, why not saying that Esus belong to the same family?

“The name of Esus is an element of Gaulish proper names Esunertos (“he who has the strength of Esus”) and Esugenos (“born of Esus” or “well-born”, equivalent to Eugene in Greek). According to Joseph Vendryes, the name “Esugenos” is found in Welsh in the form of Owain and Irish in Eogain. It is found in Breton, especially in the forms Yves, Erwann and Youenn, according to Canon F. Falc’Hun. Julius Pokorny adds the Welsh Ywein, becoming Yvain in medieval French literature.” (source)

Esugenos, or Eugene in Greek, would mean well born, according to Wikipedia. Certainly, I subscribe, but what does “well born” mean precisely? Most likely: of noble origin, even of divine or semi-divine origin, ie from Hyperborea. Esugenos would be those who came from the wandering planet, from the great mothership inhabited by the former gods. To go even further, I would venture this assumption: well born would be the one that would have been created in vitro, created and not generated, born in a genetic laboratory, and not by natural means. 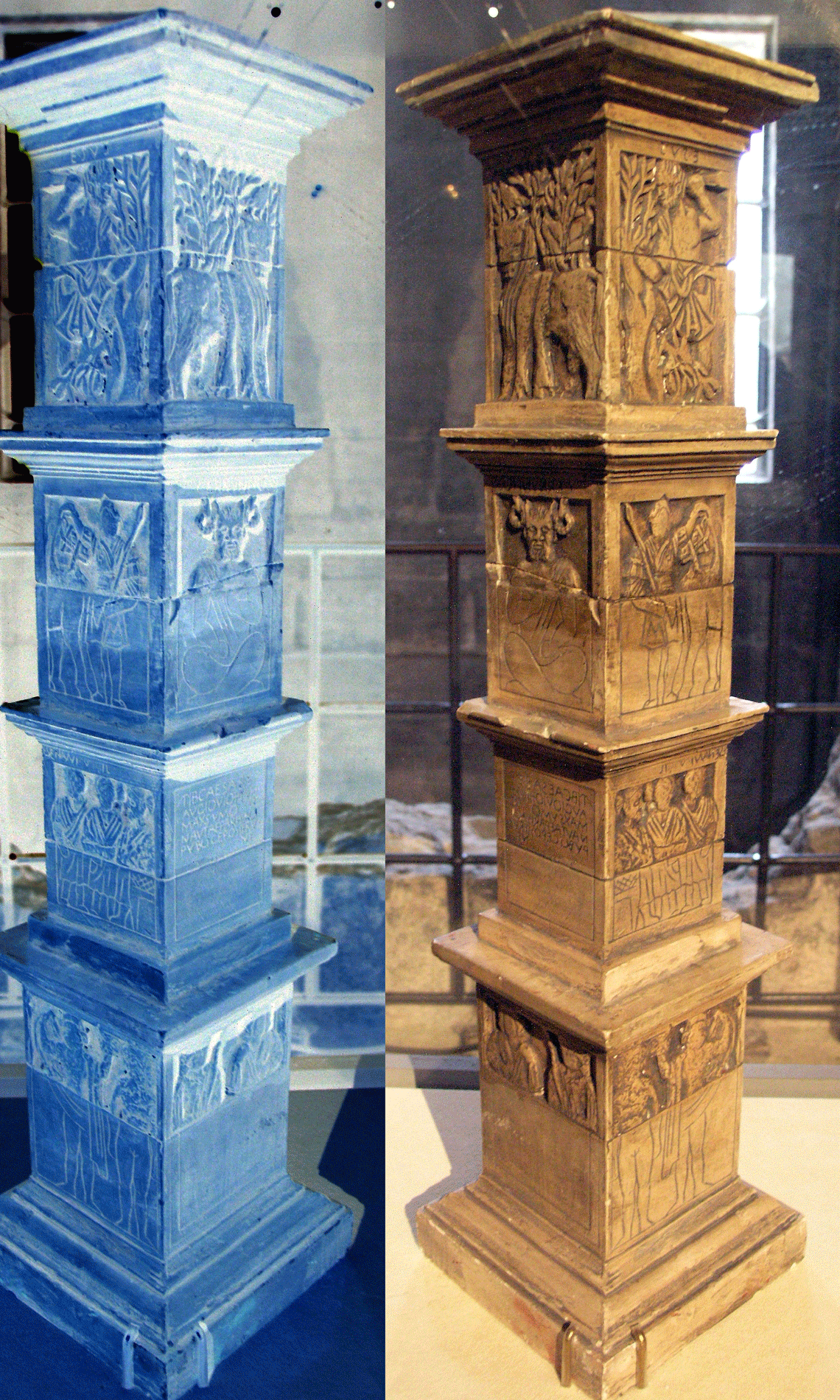 The hypothesis is not as hazardous as it seems, since, as everyone knows, chance or hazard does not exist. Hazard is another name for Osiris: asar, ousir … And Jung stated, the coincidences are but synchronicities.

The former gods had two ways to make human beings. Genetic manipulations were preferred because they could control all parameters, as opposed to the copulatory lottery. If these jolly good gods practiced the Javanese wheelbarrow, they hardly played Russian roulette.

Greek mythology cites several examples of gods or goddesses from the lab. Riddle: I was born by genetic engineering, out of the brain of my powerful father, the great Zeus. Who am I ? We have recognized Athena, a great goddess to whom we owe so much. Esugenos, in French Eugene or Eugenie, means for me from genetics. As noted, I love to mix the language of the goslings with the dusty etymology.

The pillar of the Nautes

What is the pillar of the Nautes? A stack of four cubic altars covered with Latin inscriptions. These altars dedicated to the Roman and Gallic gods were offered to the people of Lutetia by the brotherhood of the Nautes, sailors of the Seine. 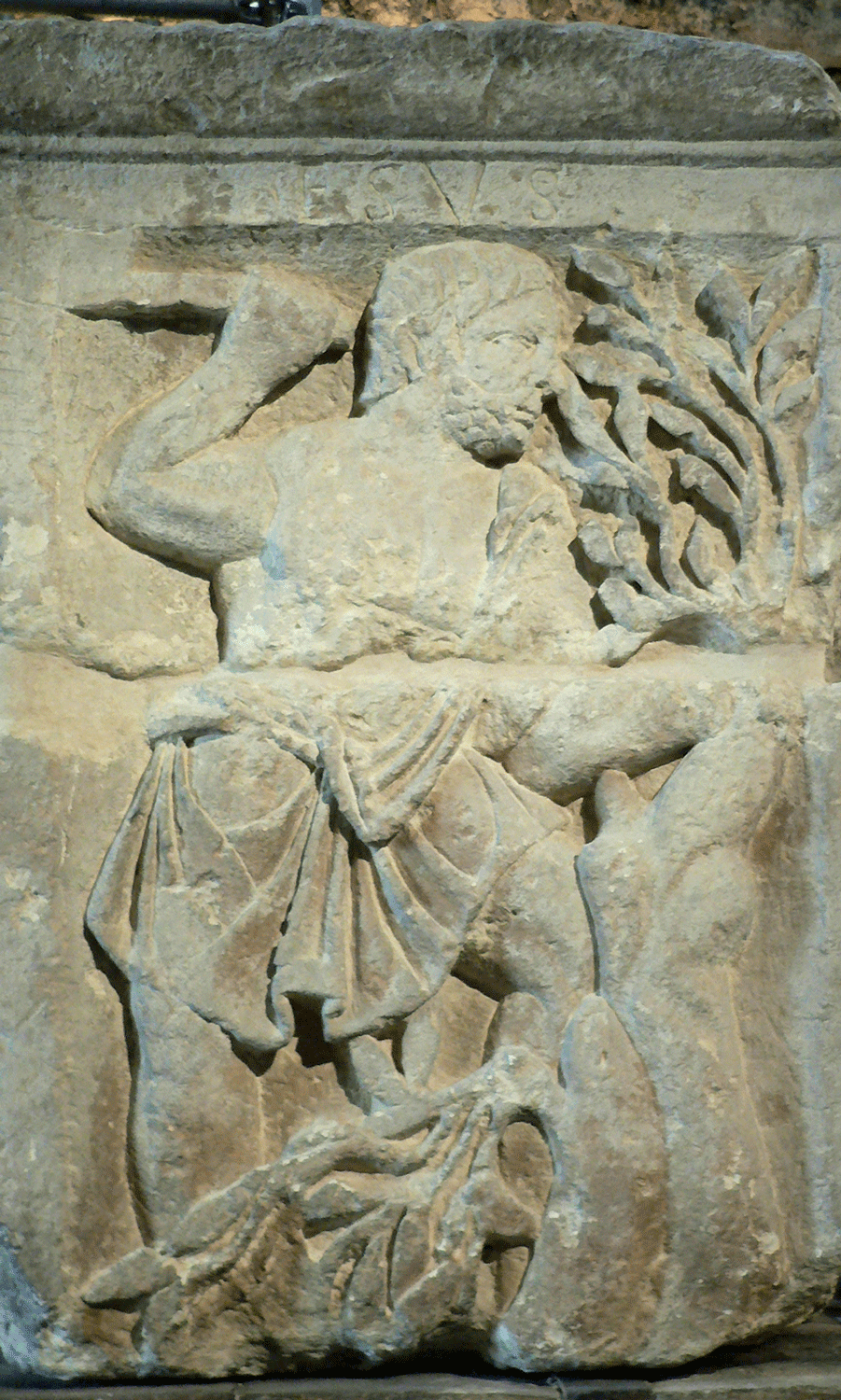 Dating from the 1st century, the pillar of the Nautes would be the oldest monument of the city of Paris, and the brotherhood of the Nautes the oldest society of this country which was then Roman Gaul. This sacrificial pillar is the prerogative of the Gallic god Esus. Covered with the blood of the victims, he accompanies all the images of Esus. In Gallo-Roman Gaul, the Celtic cults were perennial, and the Gallic gods still reigned over Gaul. The pillar of Esus was erected at each crossroads.

The cross comes from the pillar

The wise reader will have understood that this pillar inspired the cross of Jesus. Every new religion must respect the practices of the ancient religion to which the people are attached by the tradition of their ancestors. So she is careful to respect the symbols of the previous cult, adding her own symbols. 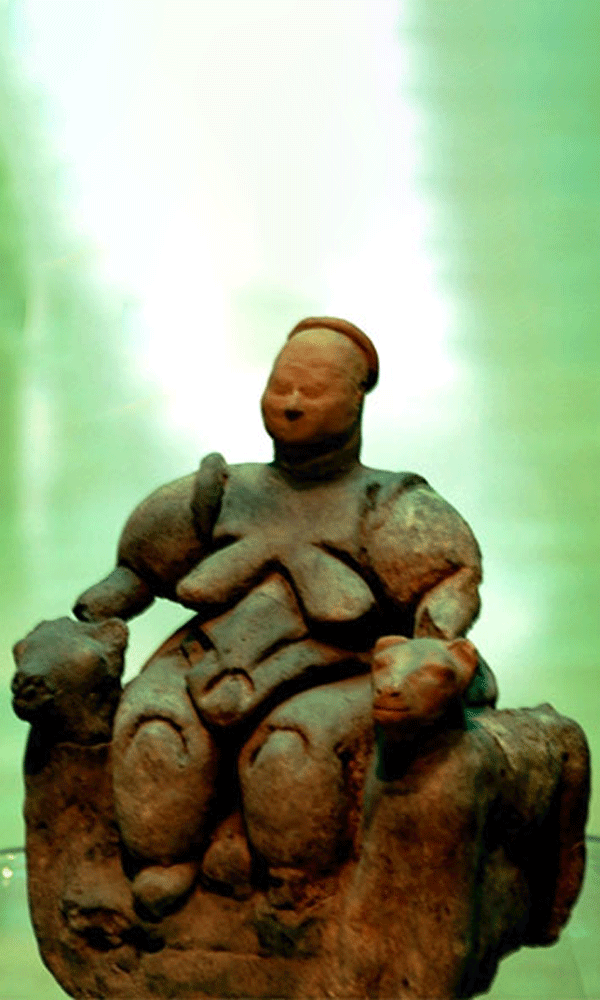 Without a hitch, the pillars of Esus were changed into crosses. And the cohorts of pilgrims long paced the ancient sacred paths. Unashamedly, the old temples were recycled into churches. And the crowd of the faithful was not diverted, the habits remained. Without ramage, the Gallic druids were changed into bishops. And the galvanized people built the cathedrals.

Whatever the period, no matter what the religion, this practice is universal: everyone finds his account. Shrines become temples or chapels. Cathedrals become mosques and mosques of cathedrals.

Do not be fooled, I have just concentrated several millennia in a few lines. The worship of Esus is three or four thousand years earlier than the Roman occupation of Gaul.

Four thousand years! Imagine the strength of the habit. Hard to go against it. The new religion had to impose itself by cunning. Without hurting beliefs and customs. She put the time, but she did it.

Yes, four thousand years. It is the bull with three cranes that gives us this historical marker. It means the era of Taurus, around – 4000 to – 2000 BCE. Before the Common Era One should say the era of Taure, because it is the peak of the matriarchy, as we saw on the Çatal Höyük site in Turkey. That’s why Mithra is an androgynous, it marks the transition to the patriarchate of Ramos said Rama. 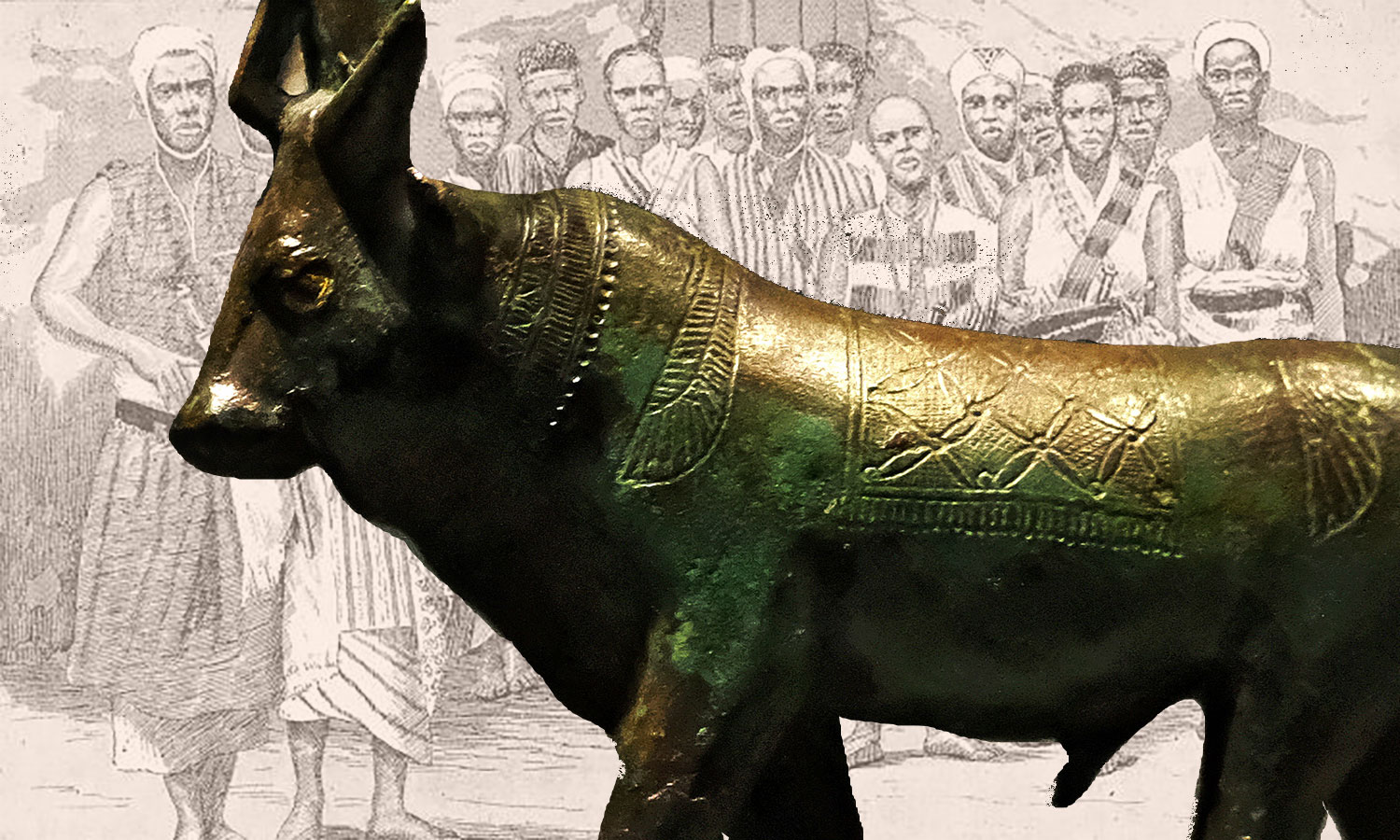