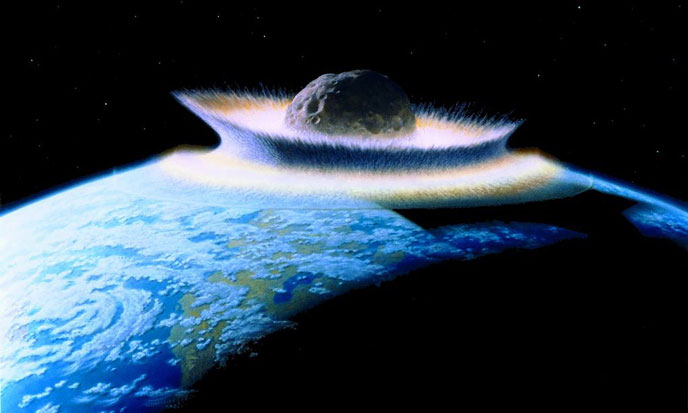 We saw the different interpretations of the famous myth of Atlas, the Earth holder. This Titan giant of great strength, is the son of alien god Poseidon, the first leader of Atlantis.

I myself have brought faith to the achievement of Atlas, until I wondered if it was indeed an achievement. In fact, it might as well be the opposite: a huge blunder. Pilot error as the most unfortunate consequences.

What I did not realize at first is that Atlantis was not a natural island, which one is hard pressed to find any trace in the Atlantic. We will never find. There is good reason for this: Atlantis was an artificial island 3,300 km in diameter. Its huge size allowed it just to find a place between the two shores of the Atlantic Ocean.

Thus it offered an easy passage to “the continent that lies on the other side of the ocean,” consistent with the description of Plato. Even its size corresponds to the writings of the philosopher.

Plato said Atlantis island was larger than North Africa and the Middle East together. This is the case of the artificial island. Its hull was made of durable metal, and the metal island landed on the ocean where it will float, anchored firmly to the shallows of the Atlantic ridge.

This island was a mother ship floating on the water. In other times and in other places, that mothership was named Nibiru. But the island names are innumerable, each civilization having remembered and every people having renamed their way. Nibiru was an orbiting spacecraft, much too lage to land on our planet.

Nibiru remained stationary orbit above the north pole, hence the name of Hyperborea that the Celts gave him.

Hyperborea literally means “above the North Pole.” The Hyperboreans are also called the Aesir, the Olympians, the Elohim or the Anunnaki, according to local traditions. They are the same astronaut gods, almighty aliens with almost unlimited science.

From my research, I offer this possible script. It is subject to future changes.

Atlas, heir of Poseidon, was the captain of the huge island-ship named Atlantis. When Atlantis left the waters of the Atlantic Ocean, the huge volume of displaced water caused the tsunami since known as the Great Flood, 12000 years ago.

The Mothership Hyperborea or Nibiru held four satellite spaceships. Nibiru sent to Earth three islands-ships that have landed on the oceans of the world, where there was enough room to accommodate these 3600km diameter islands!!

Just check out a world map to see that there are only three places that could accommodate such vast islands: the Atlantic Ocean, the Indian Ocean and the Pacific Ocean.

Imagine that precisely many protohistoric legends indicate the presence of developed islands in each of these oceans. In the Atlantic, it is called Atlantis. In the Pacific, it is Mu. And in the Indian Ocean, it is Punt aka Lemuria.

These no-where islands were artificial. They are gone. They may come back.

This strategy allowed the civilizing gods to radiate around their developed and comfortable islands. Gods would welcome elected men and women on board. This elite was educated by the gods and did work for them.

This explains why the major developed areas as well as cyclopean buildings are located on the banks of the three oceans: they represent the first Atlantean colonies. This also explains the sudden origin of ancient first civilizations, which I call orphan civilizations: they really were. For their parents went back to heaven from where they came.

While it corresponds closely to the specific descriptions given by patriarch Enoch in his censored book.

I think I have straighten up the whole story: it was tired of walking upside down. For the rest, it is easy to reconstruct.

After several millenia of Oceanic and Hyperborean stay, the artificial islands regained hold of the giant spaceship Nibiru, which the Sumerian texts call the roaming planet. One can imagine how big it was to have to accommodate in its hold three islands-ships 3,600 km diameter each! The size of Nibiru would be around the Earth’s.

When time of departure came, Captain Atlas took control of Atlantis vessel to take off the Atlantic Ocean. Atlas did something wrong, the spaceship fell down to the ocean. The mass of the displaced water caused a devastating tsunami.

A 4 km high wave destroyed towns and immersed in a sustainable human chaos they have become wild or barbarians once again.

The Atlantean ship took its course to the stars, and human people remained in deep shit. Yes, the reports of our ancestors with the gods astronauts were often strained. To say the least. And when they come back, they will soon start their bullshit. They are gods, after all …