If the existence of Atlantis is attested by some authors like Plato, the presence of an island in the middle of the Atlantic Ocean is far from proven.

Is observed indeed no trace of an island continent at the bottom of the ocean. On the contrary, there is a ridge, the Atlantic ridge, which appears to prohibit island flooding in these parts. So what? Is the island Atlantis real? Has it sank into the depths in one night, as Plato says? Geologists unanimously protest it is quite impossible, to the size given by Plato, namely a circular island 3000 km in diameter.

I have to admit that such a land could hardly goes unnoticed, even at the bottom of the ocean. Yet the existence of Atlantis could explain so easily so many mysterious phenomena that it seems difficult to me, if not impossible, to abandon such a successful track. That’s why, for years, some many prolific authors have been imagining so many scenarii, most not in accordance with Plato, which is the only comprehensive source left.

Atlantis – or any other missing continent – was placed in all places, and I bet other solutions, even more preposterous, will not fail to emerge in the coming times. We are at a dead end, we must admit. Especially that Atlantis is not the only enigma of this kind. Other continents were once islands disappeared under the waves of the various oceans of the world, under comparable conditions, and equally inexplicable.  Geologists and new Archeos have not finished to fight. Because at the bottom of the Pacific Ocean, no geological record of MU could be found anywhere. At the bottom of the Indian Ocean, we find no trace of Lemuria as well, or the Land of Punt, or any submerged island. These events are fairly recent in geological terms so that the remains must be still visible and even identifiable.

Atlantis, Lemuria, Mu, these round islands were home, they say, civilized beings, scientists, highly developed, mastering technology ignored other men. They probably built pyramids, temples and palaces whose ruins still should be visible even covered with corals and algae. This is the case, since it happens that no week without announces new discoveries of pyramids, the seabed, or in remote areas. There are pyramids everywhere, open your eyes and when you see one, send me pictures.

There is another enigma of the same order, although this is not an island, but of land in the sky. Far more exciting than previous, this enigma is Hyperborea. The Mercator Polar Map shows four islands and a central mountain, Mount Meru. Now it is impossible for these islands to have existed under the pack ice of the North Pole. So ? We must look for another hypothesis … Hyperborea means litteraly: “above North pole”. Thus up in the sky ! 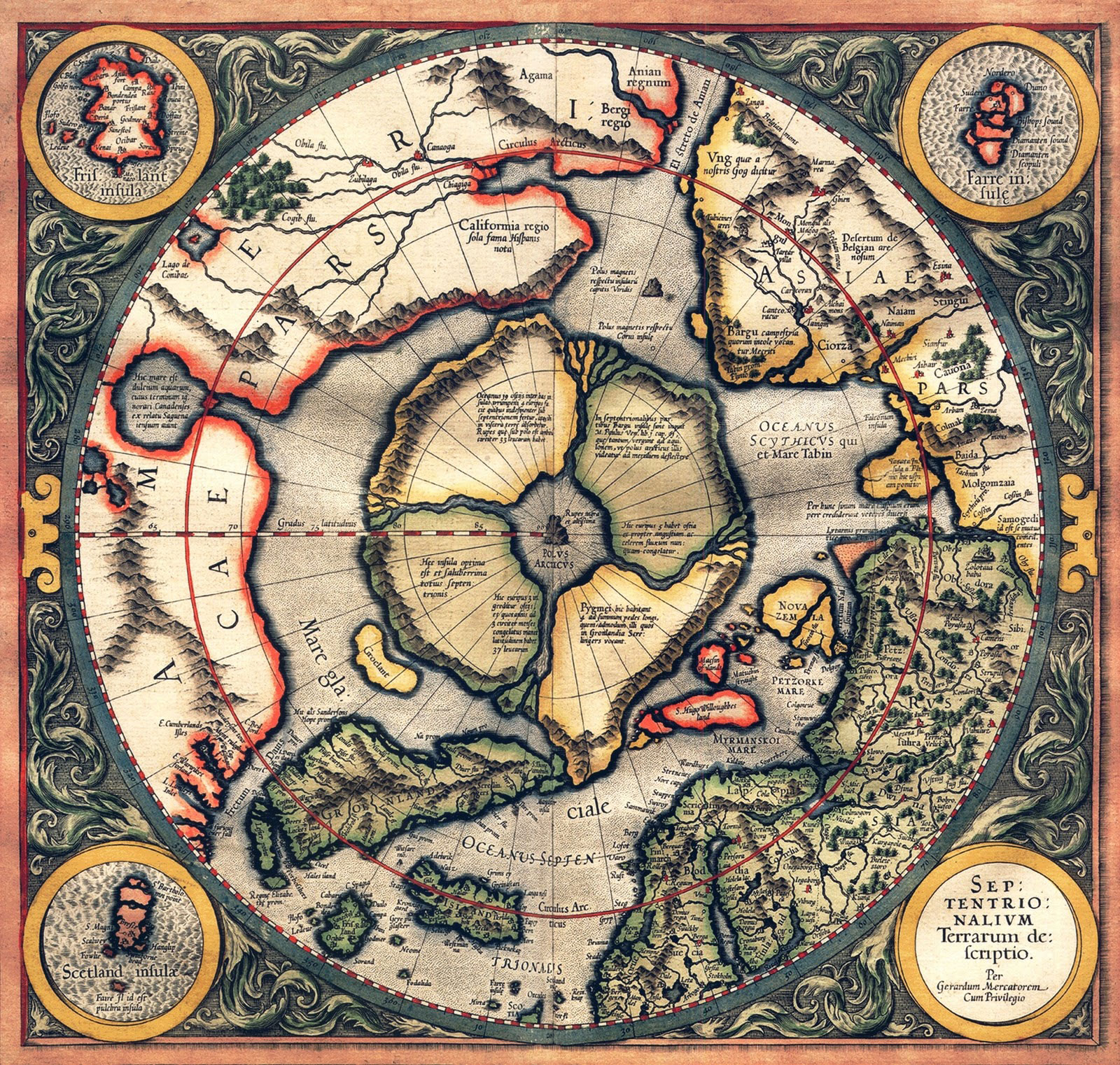 I was dreaming about this island in the sky when I designed the delirium which follows, and may well be true. In other articles, I mentioned an elegant event, which takes for me over time all the appearance of reality. My big problem: this solution is even more crazy than the sunken Atlantis and that sort of crap. Anyway!

Here’s the point: tens of millenia ago, or more, super human beings came from the stars. Their mission: terraforming a wild planet to make it habitable. Their choice: the third planet of the solar system.

They have made the atmosphere with bacteria, they have created genetically viable species, they have changed dozens of others, and the blue planet followed its new course. Over time, these terraforming workers had different stays on earth. Where are they staying? In the beginning, there was no habitat, since the planet was still wild. These long-term travelers were in need of comfort, civilization, luxury, laboratories, factories and all kinds of heavy equipment. For convenience, and because they were professional, they were traveling in a giant arranged mothership, an entire divine country.

It was a kind of spatial island if you will – they could land in any ocean wide enough to accommodate the ship. I thus imagined Atlantis, this circular island 3,000 km in diameter, was a spaceship that was once placed in the middle of the Atlantic Ocean.

Such diameter left little sea to cross to reach Atlantis, from the European side as well as from the American side, which matches precisely the description of Plato.

But when the Greek philosopher wrote that the whole island has disappeared down the depths of the waves in the space of a single night, he was not quite right. The island has indeed disappeared, but it is not at the bottom of the water. It is gone. And it missed the taking off. The ship-island fell heavily in the Atlantic ocean, forming a massive tsunami that was called the Flood.

The case of Hyperborea is a little different. This is not an island, I said, it is a land in the sky. I had first imagined Hyperborea as a gigantic mother ship, with a diameter close to that of the Earth, able to accommodate in its hold three-island vessels 3000km in diameter each, namely the island of Atlantis, the island of Punt or Lemuria and the island of Mu.

Looking more closely, we can see that Atlantis and Hyperborea appear at two different times in History. Atlantis disappears, according to Plato, around 10,000 BCE, ie 12,000 years ago. Yes, already. Time passes so fast. On the other hand, Hyperborea is not present in the legendary texts before 4000 BCE.