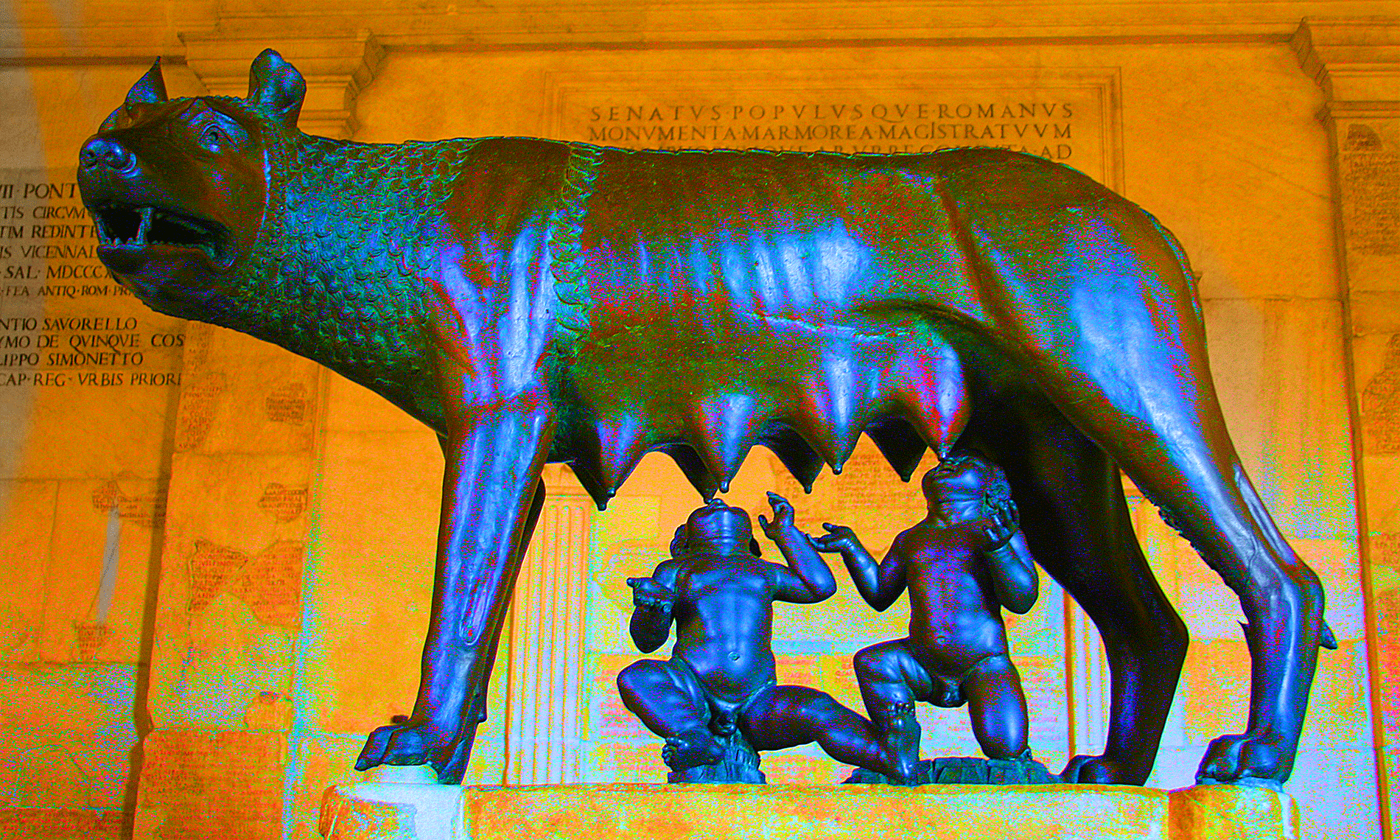 Eternal city, ancient culture that leads us again and again serves as a base to ours, Rome was not built in a day, they say. Yet it also says it’s in one day it was founded. Rome, we kept so many rules from and we know so little about: the major part of its arts and culture is lost !

Rome, heir of knowledge and observations dating back to ancient times and relooked by the genius of its engineers and its scholars.  Rome, last link in the long chain of transmission connecting us to Atlantis and to the glorious civilizations before the flood Rome, according to legend, was founded by two wild children, twin brothers named Romulus and Remus.

Here is the best-known version of their story. Then I will tell you the decrypted versions. Romulus and Remus are the twin sons of vestala priestess who renouced any sex Rhea Silvia and god Mars. Rhea Silvia is the daughter of a local wren. The latter, fearing future rivals, orders babies to be thrown into the Tiber. But newborns were abandoned in a basket on the river then discovered under a wild fig tree by a she-wolf who breastfed them. A woodpecker – the bird of Mars – was watching over them. This is pure genuine rubbish. Too many symbols, excessive borrowing, not enough authenticity.

The young Moses, according to legend, was rescued from the water too. Only Moses appeared much earlier than the twins of Rome. This time history isn’t repeating, historians are.

Livy and Plutarch relates another version of the legend: the twins were discovered in the cave of Lupercale by the shepherd Faustulus, keeper of flocks of Amulius.
This would have entrusted the care of his wife Laurentia, a prostitute the shepherds called lupa, the she-wolf. Some naive or cunning Latin author has created the myth of Mother wolf, which puts the city under the double sign of Mars the warrior.

Fed by a wolf sounds better than raised by a whore.

Here we can feel the print of the Empire which never ceased to burnish its legend. Beyond the jumble borrowed Hebrews and others, the myth says that Rome was founded by two sources, hence the twinship. Except than the two sources of Rome were false twins.

Historians know that the first source is Etruscan. The Etruscan people is closely associated with Romulus and Rome from its origin. Etruscan dynasty has played a major role in the kingdom of Rome. It is through the Etruscan kings that the modest town has become a thriving city-state from the 6th century BCE. (source)

This Etruscan takes a special meaning for me: I think with Livy that Etruscans came from the north, they were of Hyperborean origin. We saw the close relationship of Etruscan metaphysics and culture with the Yoruba’s in West Africa. I told how, after the sinking of Atlantis some 12,000 years ago, the Atlanteans left America for their homelands across the Atlantic Ocean. Among them, there were black and white people, leaving in perfect harmony and mutual respect.

Black American Gods have returned Yoruba Country, while the White Gods founded a New Atlantis called The Western Empire on the site of the present North Sea. Several white groups are scattered along the coasts of Europe: Tuatha of Ireland, Basques, Ligurians, Catalans, Corsicans … and our famous Etruscans, who themselves were a mixed group where blacks and whites lived together in plain equality. So that people, heir to the Atlantean science, had kept much of their ancient hydraulic expertise, and probably other technologies that served as tutor in Rome.

Better yet, the Etruscans are the heirs of tolerance and openness of the Atlanteans, in which the coexistence of races has never been a problem. The majority of social problems were ironed out in ancient Atlantis, by the application of the sacred system of the four colleges or castes: farmers, merchants, warriors and trainers. All human activity is thus harmonized.

The caste system, a legacy of Atlantis and carried by Rama acted corruptly in India where the horizontal exchange has become a vertical hierarchy, crumbling the four colleges in an infinite number of sub-caste and non-caste in opposite the original ramaïque philosophy.

We know little about the Etruscan civilization, yet it has left us “numerous inscriptions of about 10000 This is huge, considering the fact that this civilization has given us written testimony for a weary relatively short time -. between the early seventh century BCE, the date of our first entries, and the late first century BCE. In contrast, it may be recalled that for the same time interval, we only have about 3000 Latin inscriptions.” (source)

One of two things: either the Etruscans were graphomaniacs or the early Romans were illiterate. I lean toward the second hypothesis willingly.

In the myth of Romulus and Remus, we can feel the Etruscan presence everywhere.

It is found even in the good fairy who looks over the cradle of the twins: Mother Wolf.

The founders of Rome were fed by the she-wolf, they are the sons of the Wolf Clan.

We identify here the descent of Atlantis through the Tuatha of Hyperborea and the Etruscans also direct descendants of the Peoples of the Sea.

But the biggest discovery is yet to come.

Those who know do not speak and those who speak do not know. The wise teaches his actions and not by his words.