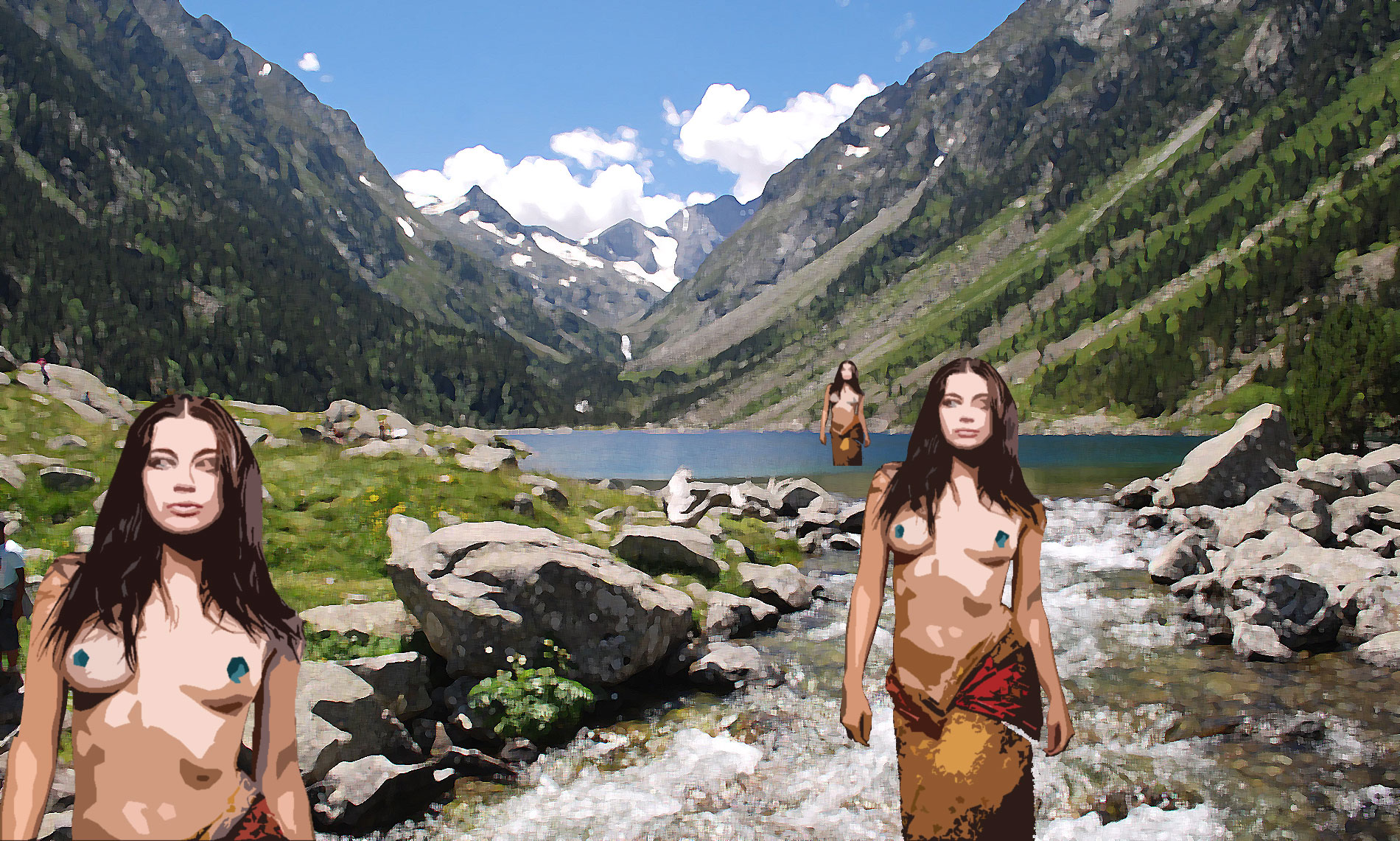 This ancient tale of the Pyrenees could be part of the Atlantean legacy through the Basque people. Obviously, it is not native to the Pyrenees, there was no consistency suitable location. A page to read while listening to One More Cup of Coffee in a loop.

Close to the sky, among the highest peaks of the Pyrenees, there is a lost valley. Flowers and fruit flourish there in abundance all year long: the hot waters of geysers grow even palm trees.

The inhabitants of this lost valley lead a peaceful life, engaged with the same pleasure in all the arts and crafts. Cut off from the wider world, they do know some legends, the old ones told at the vigil. They speak a guttural and rolling language, sounding piped, wet and pinched. But they use it only to sing. To chat, they keep silent. Do I mean they tapewrite all on Facebook? Not at all! Face to face they exchange ideas, thoughts and images without a single  word, just through the eyes.

They are dressed in drafts, because the mild climate allows it all year long and they ignore modesty. “The most beautiful pearls are not hidden in a bag,” says a local proverb. Their crystalpure customs and natural way of life forbid them to come down to see their fellows in the valley below. Anyway they don ‘t want to. Why would they do such an odd thing? The other men, in their view, are incomprehensible mutants. At that thought, they laugh a throaty laugh. Up there, they are not missing the laughing time. It is non-stop.

The lost tribe use more than sixty ways of laughing, sixty different laughters, each of which corresponds to a type of humor or a particular emotion. From a young age, children handle perfectly the subtle comic range. The throaty laugh, for example, expresses your mockery that simulates a feeling of superiority and ends with a laugh of your own stupidity. Tickled laughter vs pinched laughter. The thin laugh responds to the plump laugh. Only laughing out loud  -lol!- can be used anytime. They call it wiseman laugh. These sixty tons of laughter blend and harmonize to perfection, and every opportunity to meet -that are many up there- quickly turns into an improvised laughter concert. 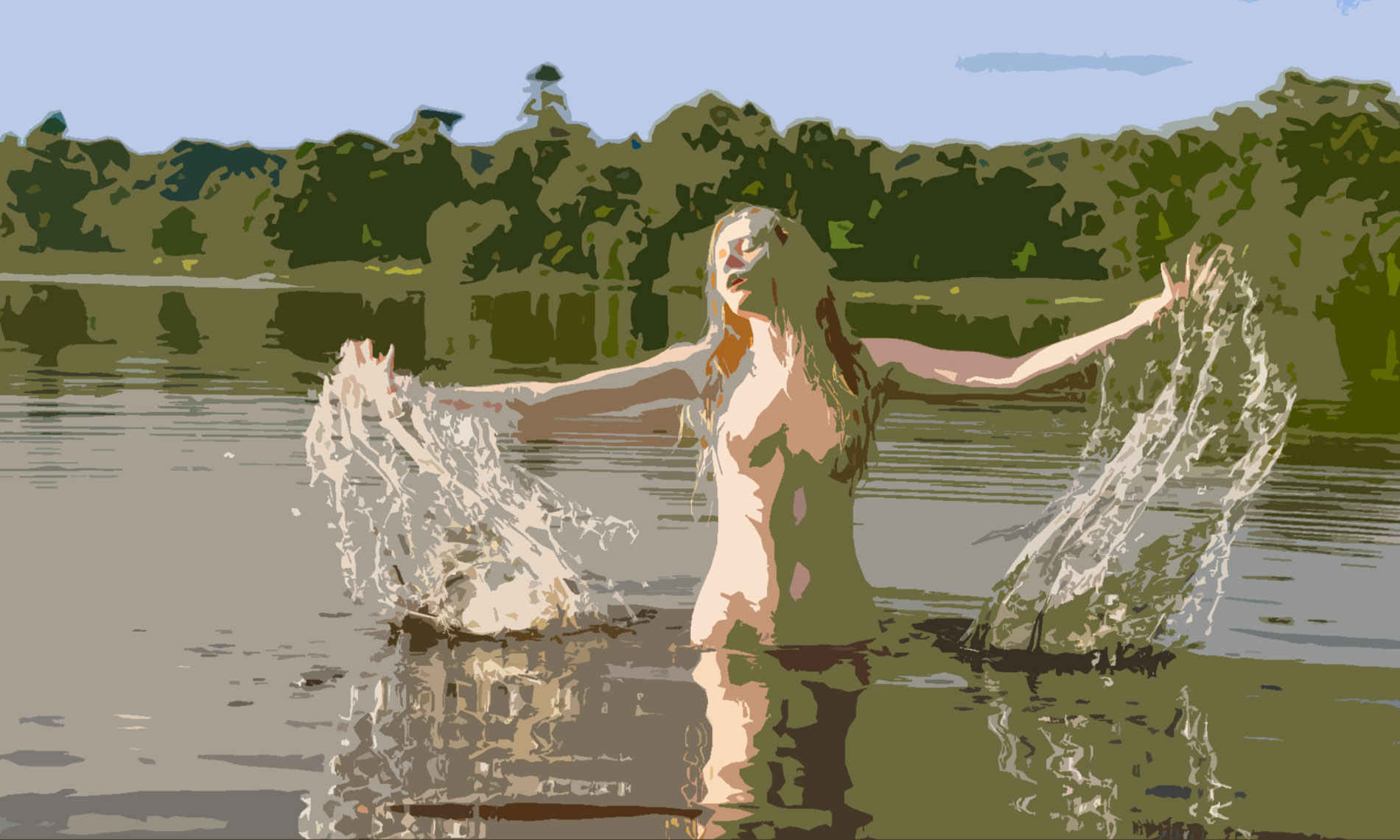 At bath time, close to geysers, you got to hear the pearly melodies of girls’ laughters that meet in-song against the rhythmic bass of male laughter. Those who heard it say it is an unforgetable delight. In this valley run seven fountains of fresh and wonderful water, so invigorating that there is no trade for wine. The elders say the fountains are magical. Thanks to their virtues, they live very long years with the appearance of youth , without losing muscle or take a bad fat, keepeing their skin without spot or wrinkles.

“Heal yourself if you love you as I love you” is said to babies.

Happiness, humor and carefree form the basis of their mood, which is quite pleasant. This water is blessed by lightning. Lightning often strikes the storm peaks and rolls its echoes throughout the mountains. And water sources receiving kisses from lightning. The virtues of water are such that lightning is called from above the water, or water of laughter. Besides their passion for this natural drink, to which they devote almost Dionysian cult, they have no religion but laughter.

For laughing is the essence of man.

Such independence eventually irritate God. One day, he appears to Tin Whistle, the flute player. 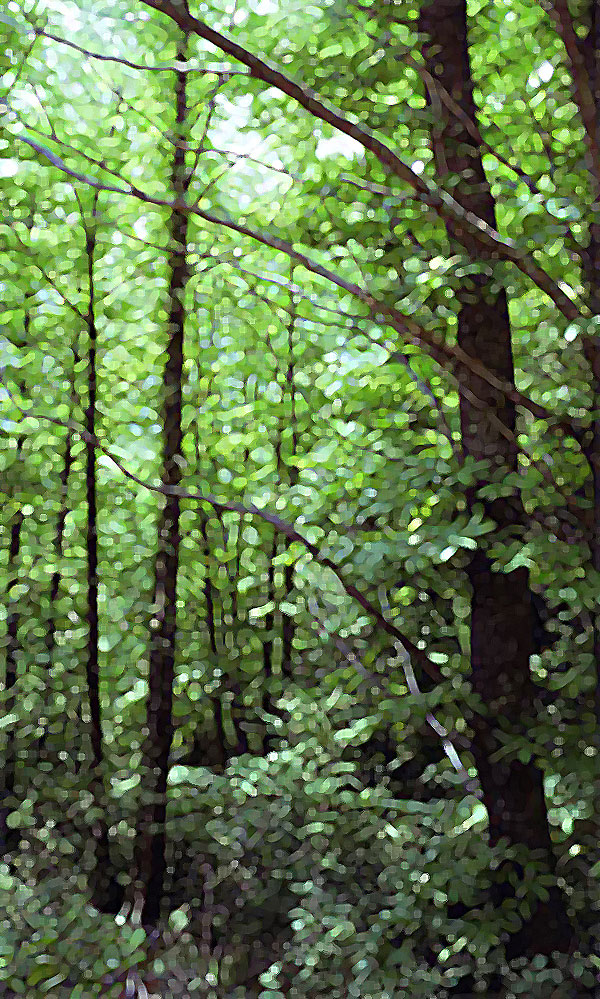 “Tin!” he shouted so loud that the flute player thought he received lightning. “Tin Whistle, my dear boy, God came to tell you this. I decided to poison the seven sources. Tomorrow, their water will drive crazy.” The poor flute player was amazed. “But why? Tin said. What is our crime?” God shrugged, which brought down the top of the “Pic du Midi et demie”, that became the “Pic du Midi”.What good reason to seek God’s will? That sounds terribly unfair, and even if it is it can not be discussed. “Tin Whistle, beware! I hear what you think!” God cleared his throat: “I have a special plan for you.

Sympathetic you are to me and I decided to spare you. Take this.” And God gives him a cup of iron and brass. “Any water that enters the cup will become healthy, and he who drinks risks no insanity, or delusion, or other villainy.”

Tin takes the sad cup. He would have preferred a cut crystal, amethyst or ruby cup. To be a magical thing, one needs to be rich, precious and beautiful, everyone knows that, he thougt. God didn’t exactly strain himself with that stupid cup, did he? Shut up your face, Tin Whistle, you’re going too far! God shouted. If the cup does not suit you, throw it away! And God disappears behind a cloud. Tin felt doubtful about all this, the crazy water, the cup that vaccine, but hey, just in case, he decided to keep the cup.

And- just in case- he decides to use it whenever he is thirsty. It was just as well he did it. The next day, madness appears. 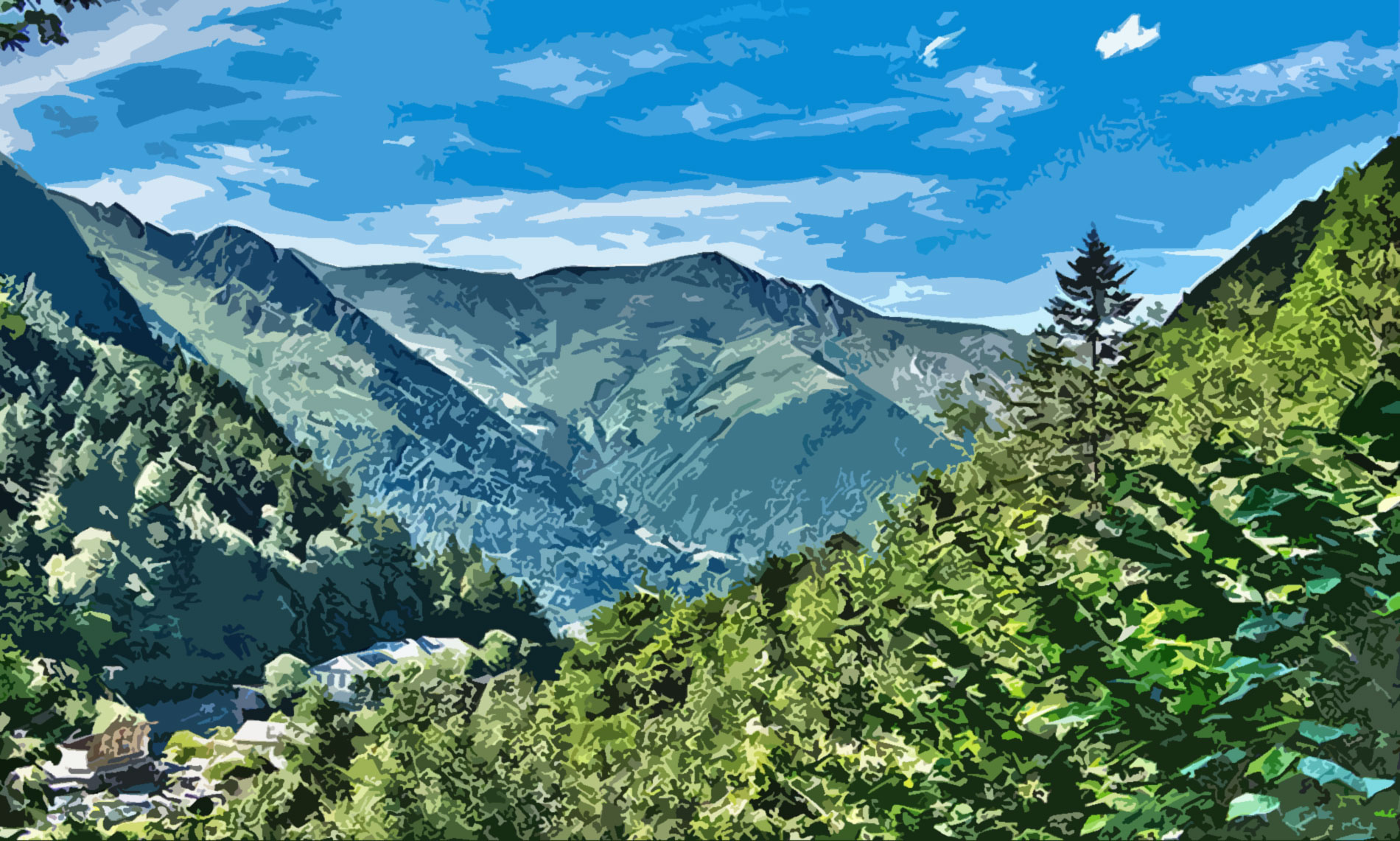 All the neighbors are hidden in bags. Tin Whistle was surprised when his girlfriend answered: “Bag?! What bag? This fancy dress is haute couture ! Wait and see, Tin, sooner or later you’ll join us!” “No way, I’d rather die” thought Tin who drank a full cup of water. The next day, they all chatter like magpies. As they are not used to it, no one listened to no one, everyone shouted, it was a cacophony. “Have mercy on my ears! Tin Whistle moaned. Please use face to face speaking”

-Tin Whistle, poor boy, they answer him, that face to face silent chat is sooo old fashion! It is no longer up to date. Now everybody’s groaning like a normal animal! Wait and see, Tin, sooner or later you’ll join us!

-Yeah, yeah, whatever, you better talk to the wall” Tin thought and he drank a full cup of cold water. The next day, they were crying and weeping like willow pond. Tin was puzzled.  “What’s up now? he asked them. Why don’t you laugh with joy

– Laugh? they exclaimed between sobs. My poor, poor, poor Tin Whistle! It’s no time to laugh!

Don’t you realize, my poor friend, there’s really no laughing matter anywhere! Open your eyes, look around you! Now it is time to mourn and weep! Wait and see, Tin, sooner or later you’ll join us!” they add before bursting into tears. “Better to hear it as to be deaf,” said Torch sadly contemplating his cup of clean water. He has no moral. Day by day, he sees deteriorating mental state of his countrymen. He sleeps badly, he is prey to nightmares.

He dreamt that the next day, they will take away his license to laugh and exchange it against a plastic card. No use to be sane in an insane world. Facing fear and loneliness eventually became intolerable to him. He took the cup of iron and threw it away into the Padirac cavern. Returning, he drank greedily all the water fountains. Then he shoved in a bag and started to cry. The next day, all the people of the lost valley joined in a big party. Tin Whistle was happy. His friends were back. And he was back to where he once belong. 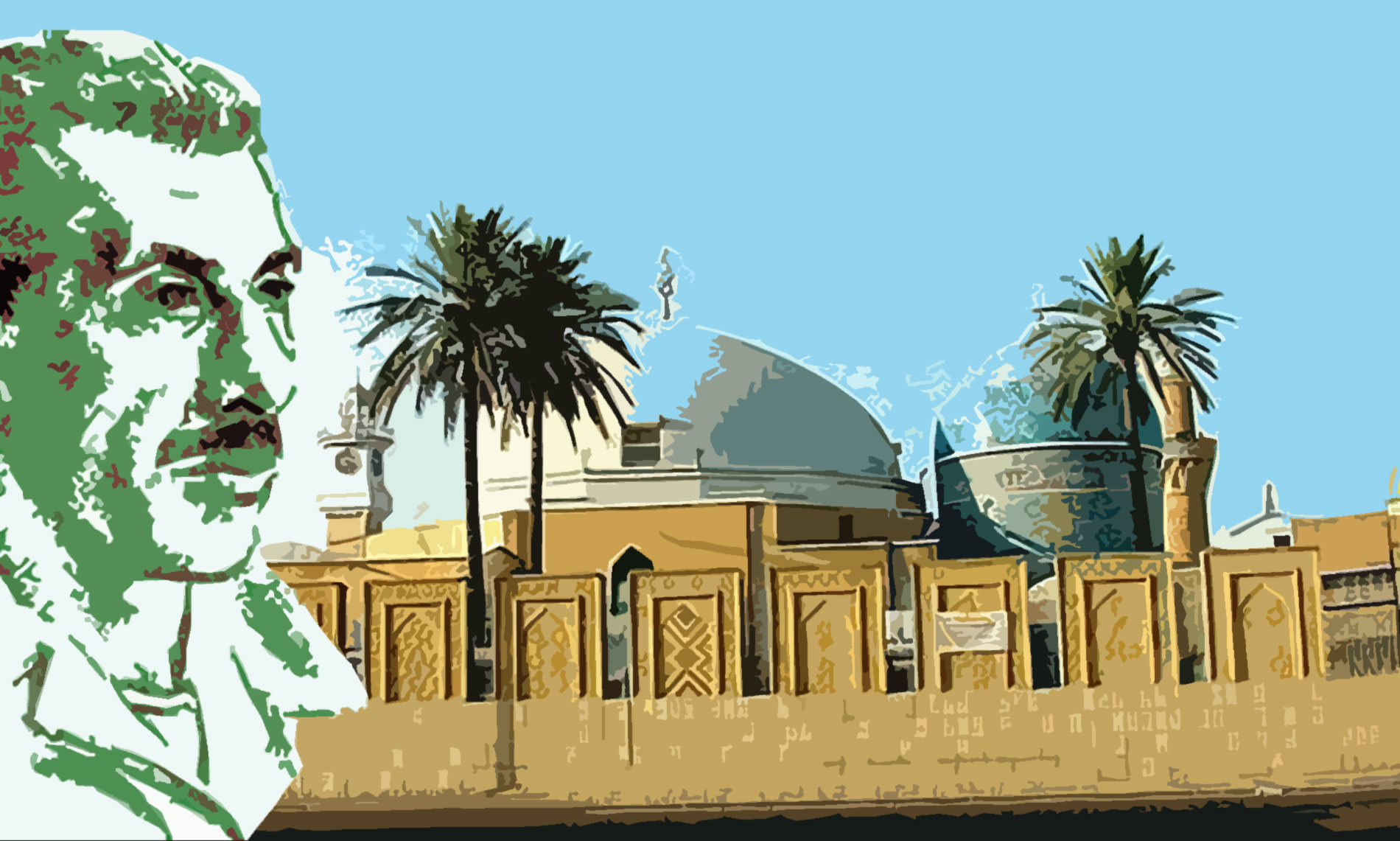 A traditional version of this story also exists in the Sufi tradition. It has been quoted by Idries Shah who adds: “The legend connected insistently Dhun-Nun the Egyptian, the alleged author of that tale, to one of the forms of Freemasonry. Anyway, Dhun-Nun is the first historical figure of the malamati dervish Order whose Western specialists have more than once noted the striking similarities with the art of the Masons. They say Dhun-Nun deciphered hieroglyphics.”

By what means this legend has it been integrated into the Bearnese folklore? Should we once again find a common source, prior to Islam, prior to the Basques or Gascons, even prior to hieroglyphics that Dhun-Nun could decipher? A pre-Egyptian source, multi-millennial, to which the Freemasons claimed to drink? This civilization of builders who sprinkled the world with great castles, megalithic cities and cyclopean walls, the Civilization of the Pyramids.

This was before the Flood, but curiously, their sacred knowledge has resurfaced in medieval Europe…

It’s easier to blow up an atom than a prejudice.