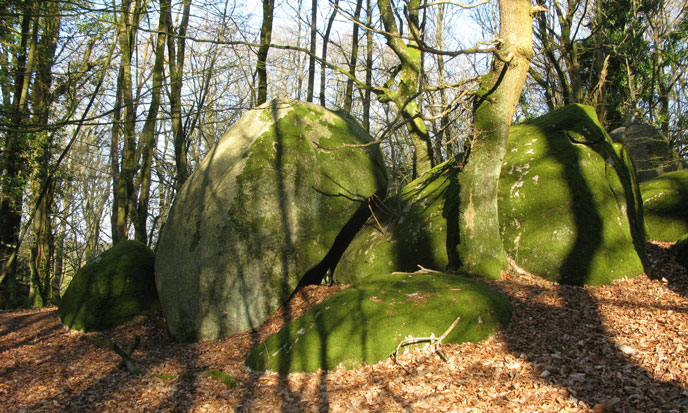 In Argoat, Pays de la Forêt, there are unknown treasures covered with moss in the shade of oaks. This one is one of my favorites, away from the beaten track of Armor, Pays de la Mer, yet very close … 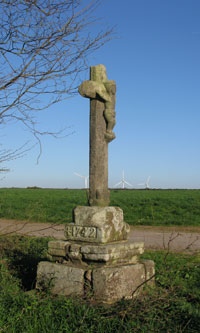 Decidedly, beautiful discoveries are not lacking in this corner of France called Brittany. Following the publication of the popular photographic report on the magical hill of Croquelien, a passionate reader tells me of this other hill of Argoat, equally magical, which I consider as interesting as Croquelien, the hill of Margot fairies.

La Chaire des Druides is a very old megalithic ensemble, which crowns a hill in the small wood of Kerohou, in the commune of Maël Pestivien, Côtes d’Armor. On my way, I no longer count the granite calvaries, like this one dating from the 18th century. The commune of Maël Pestivien is typical of wild Brittany, far from the main roads, swarming with flowered roads and stony paths, where the rounded rocks emerge from the meadows as the back of gigantic hippos in the green water of some African marshes. The Knights Templars, experts in land-based energy, took up residence in the neighborhood.

All around the magical hill they built chapels and templeries, of which there is more than one trace. Lustrous fountains, too. 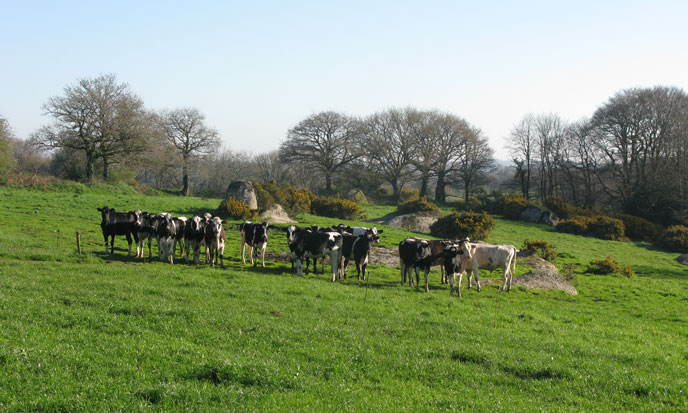 We are in Argoat, inland Brittany, formerly entirely covered with forests, a single great forest until the medieval period which bore the beautiful name of Bro Kilian, the wild country, later francised in Brocéliande -i.e. Dark Forest– and reduced to small Forest of Paimpont, Ille-et-Villaine, by some Parisian romantics in the 19th century. 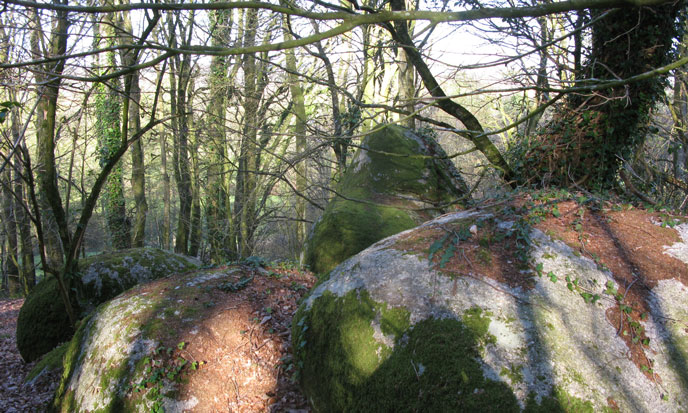 This time has seen a renewed interest in megalithic monuments, more than one ruined dolmen has been rebuilt without much cosmotelluric consideration, just for fun and decoration. Thus a British colonel ascended the most famous megalithic monument in the world, I named Stonehenge in Wiltshire. 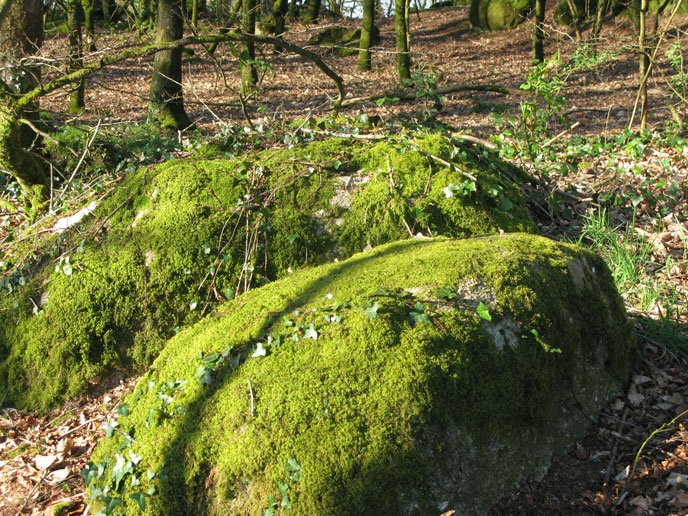 I want to quote this tourist text that calls for some comments.

Perched on top of a wooded hill, the Druid Pulpit of Kerohou is a group of granitic blocks where immolations have been carried out. The atmosphere around the pulpit is apt to awaken the legends and the various myths born in this place.

The stone of the sun and the stone of sacrifices still suggest ancestral practices. On one of the rocks, one can see the shape of a head, a body and legs … not far away, an ancestral beech tree with multiple sinuous branches has taken root on one of the big rocks, ‘It clamps so hard that it withstood the 1987 storm that decimated almost all the great trees around. (source) 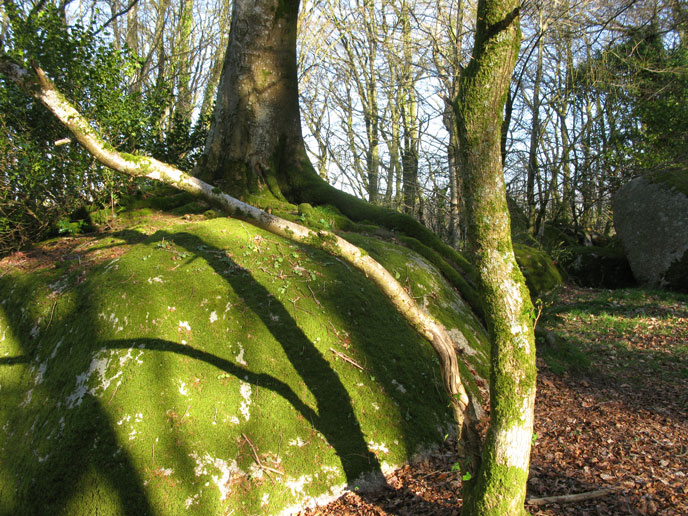 Happily, large trees around are still like a charm, or rather like a beech, because it is a beech forest, easily recognizable by the beautiful green moss that lined the trunks. It appears that neither the 1987 storm nor the New Year 2000 storm succeeded in shedding all these centenarian beech trees. 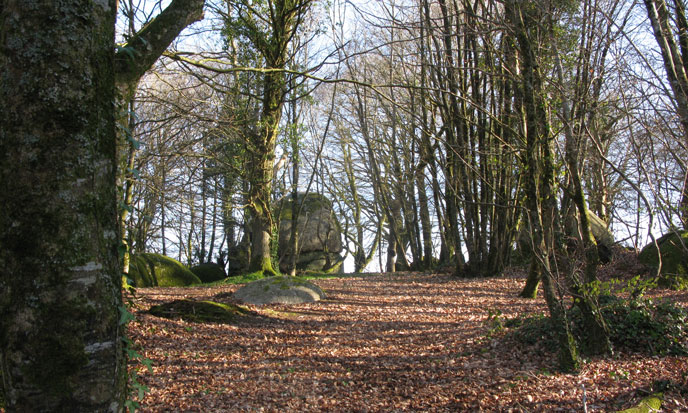 Perhaps some shrubs have suffered, I do not know, but many venerable trees have stood firm, which give the little wood of Kerohou appreciable peace and power. 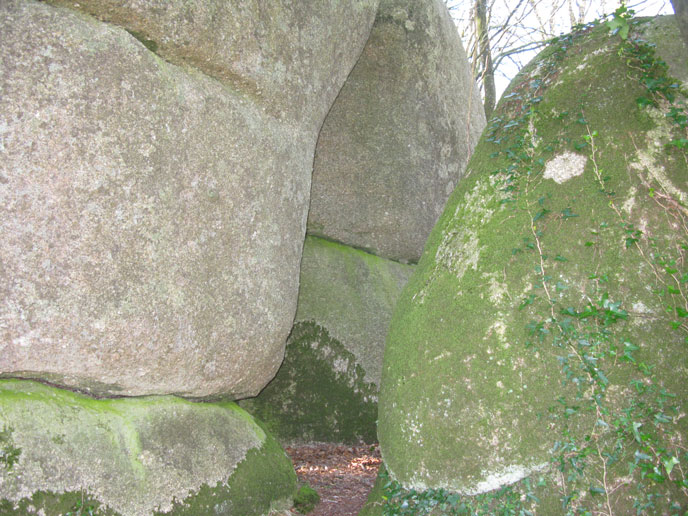 Is it an ancient place of sacrifice? Possible, but not certain. We must emphasize a fact often neglected: Druids are not contemporary with the erection of these megaliths. The Neolithic period, which is that of the erection, had stopped long before the Celtic Druids : it is farther from them than they are from us. 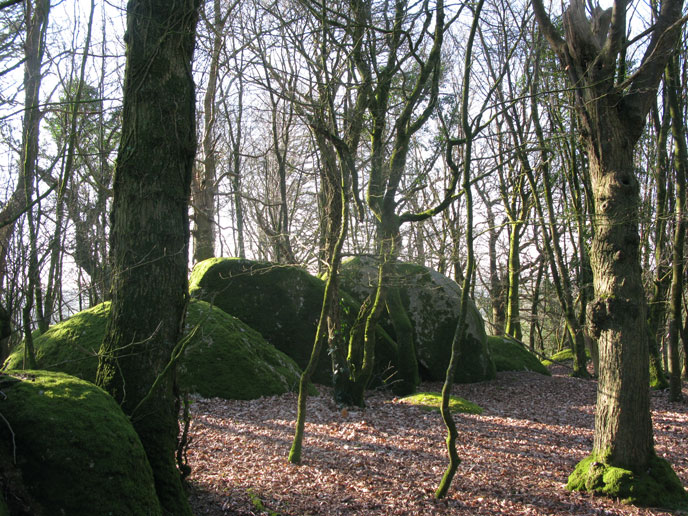 At the most, the druids have reused these large stones, because they would use this cosmos-telluric energy to their own benefit. Thus all the temples of all modern and ancient religions have been systematically built on ancient temples or ancient places of worship. 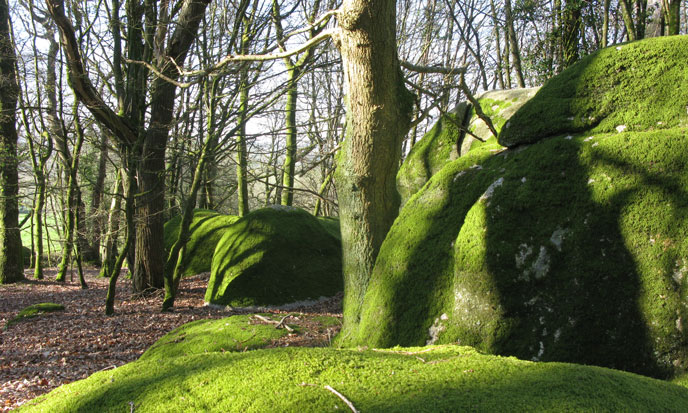 Thus, the crypt of the cathedral of Chartres, nicely called Notre Dame sous Terre, is home to one of the most powerful dolmens in France, which once stood on the top of the only hill overlooking the Beauce plain, which was then the great forest of the Carnutes, a sacred forest whose access was forbidden to non-Druids. 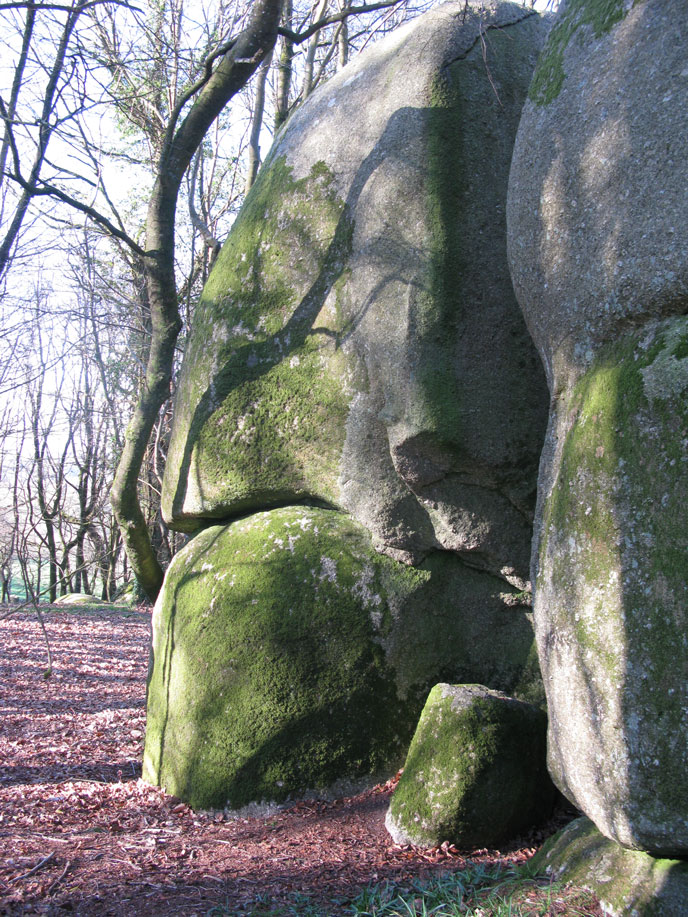 For me, there is no doubt that these stones were not assembled all alone on this powerful place. This rock formation is not at all natural, it is the work of men. Or of giants. What was the use of this hill? We must ask the giants who have arranged it. 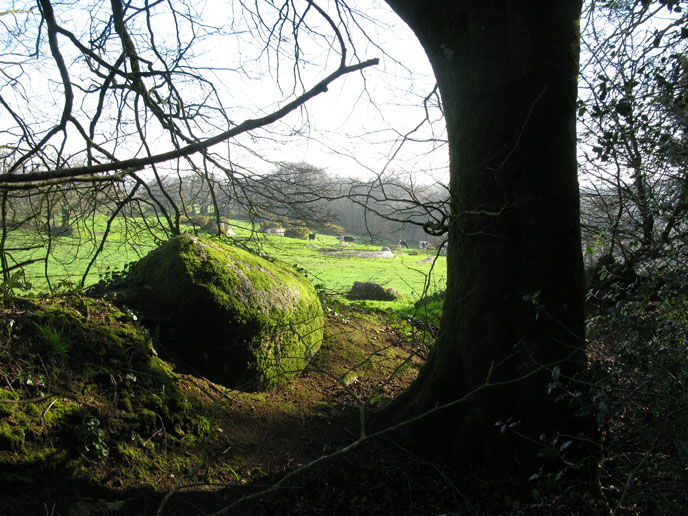 As for the Druids, we know what they have done with it: the sacred seat of a Druidic university. It is the actual name that teaches us. The pulpit is the place where the priest preaches. Or the place where a teacher teaches. Precisely the Druids were both: priests and teachers. And the place where they taught the neophytes is here, on the beautiful mossy hill of Kerohou. 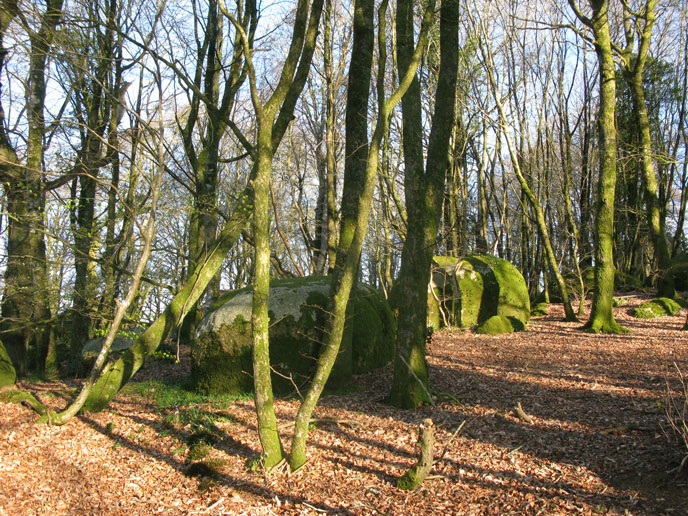 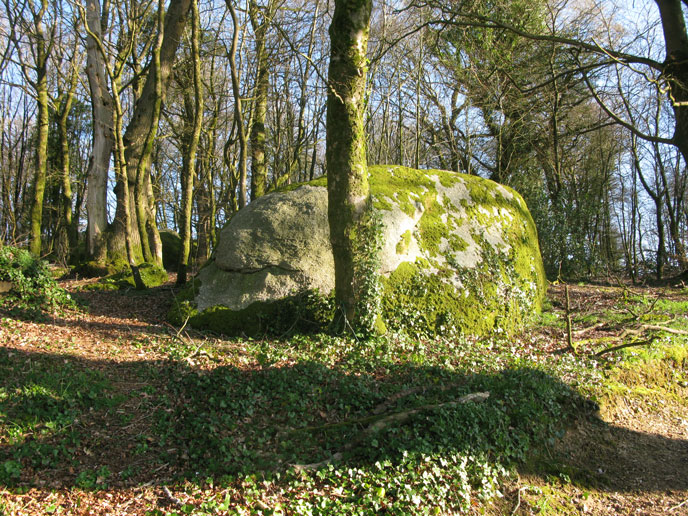 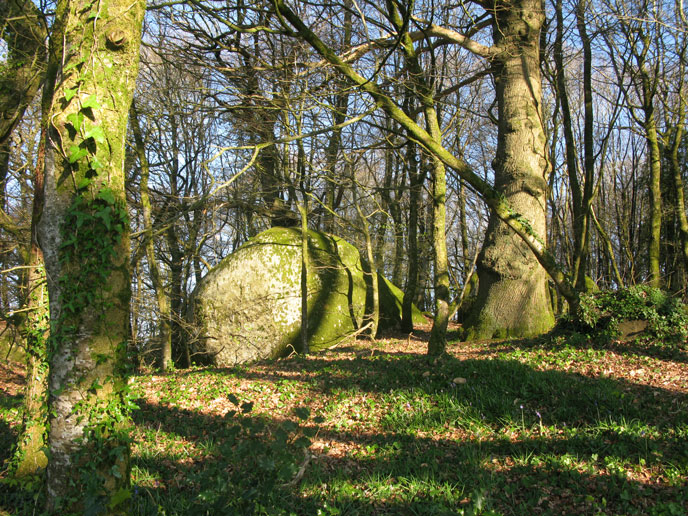 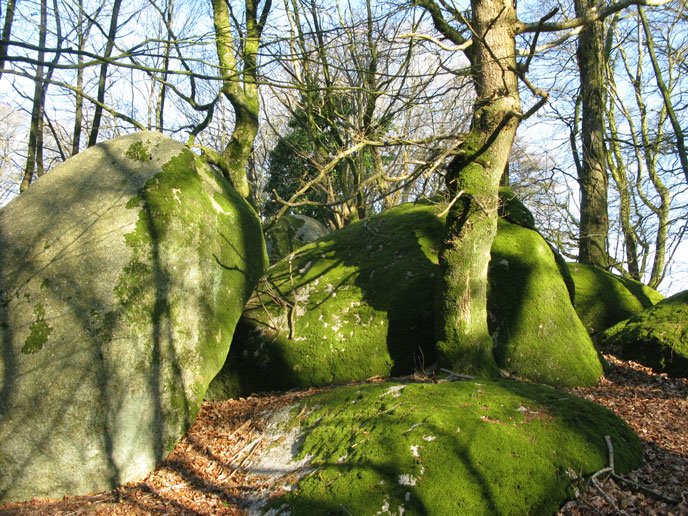 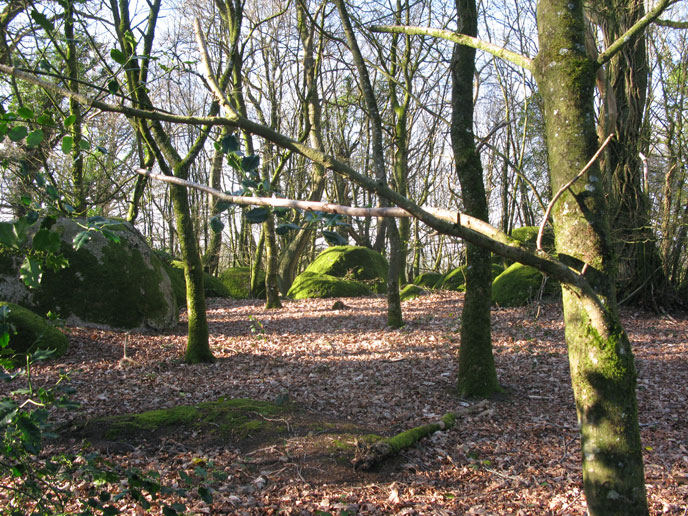 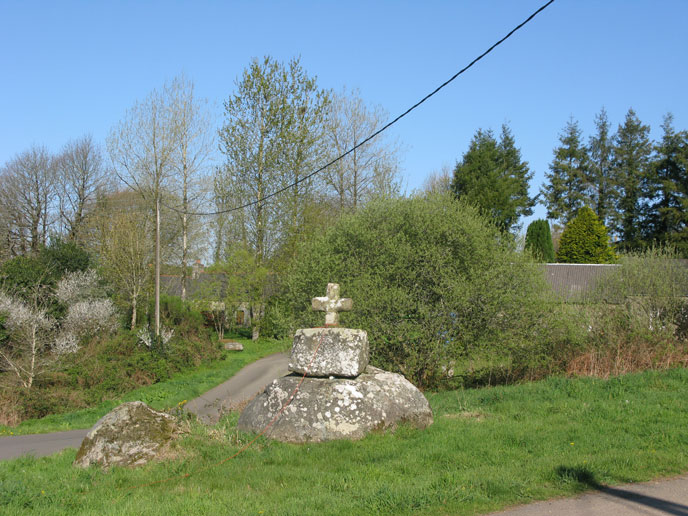 On leaving, I bow to this homage of the new religion to the old.

Don’t make any disciple, you would only get zeros.