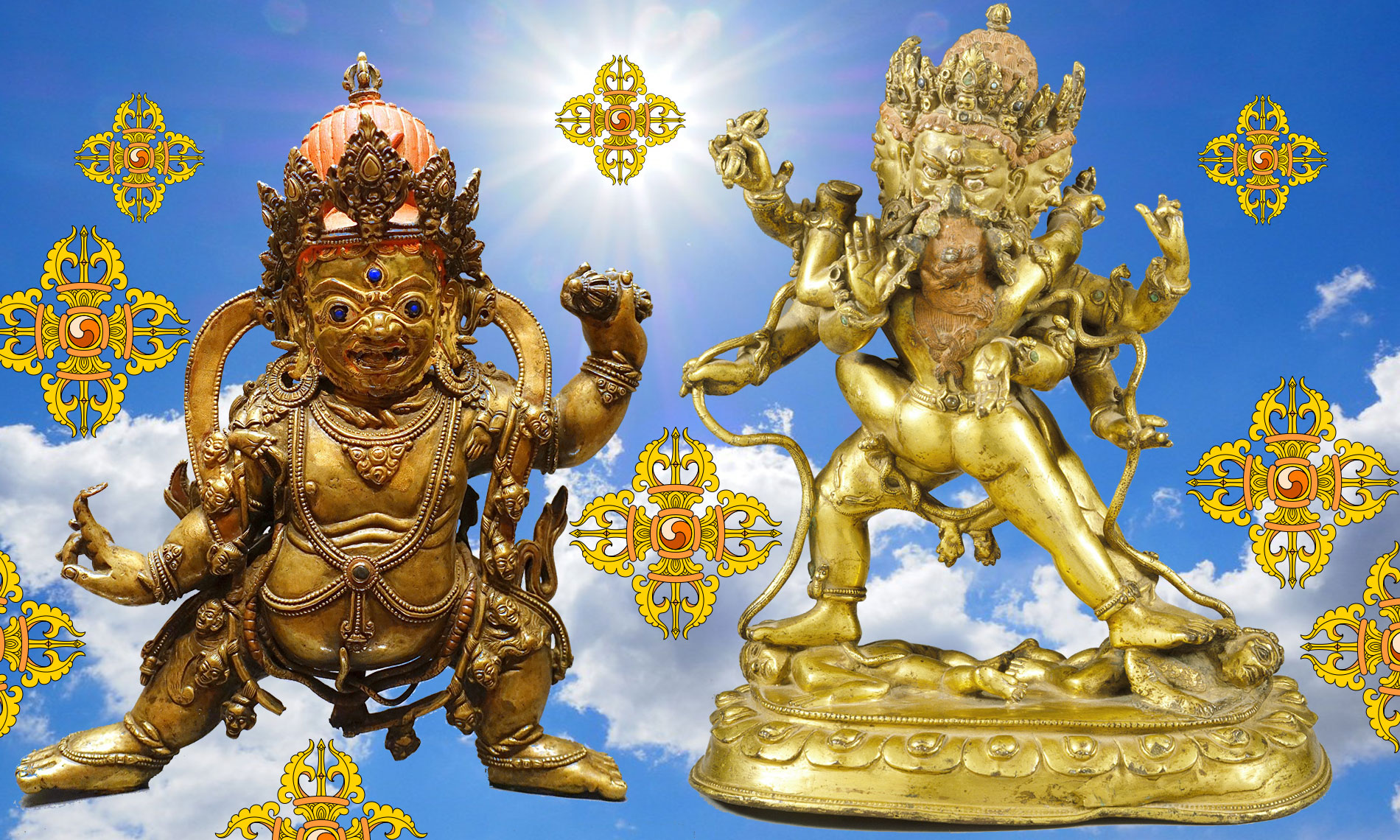 Each mythology in its complexity reproduces a local point of view on planetary events … even interplanetary ones. To associate and link the legends, to identify the protagonists, to describe the weapons and the customs, here is my way on which you do me the honor and the pleasure to walk a time with me.

The further I go, the further away I am from my celto-latin roots, the more I should feel lost and yet, I am less and less out of place. All pantheons are alike, all legends tell us only one story, ours. Far from the official story! My research on Thor’s hammer, a sort of ray-gun, brought me to the ray-launcher of the Indian tradition, the vajra, which was the weapon of the god Indra. This new track meets a singular character, Vajrapani, whose name means the bearer of vajra.

“Vajrapani is a deva in Hinduism but also a boddhisattva for Buddhists. He appeared in the second century in Mahayana iconography as endowed with a great strength and as a protector of the Buddha, and in Greco-Buddhist art he resembled Heracles, holding a short club in the form of vajra. Identifies with the protector – “mighty as an elephant” – who would have watched over Shākyamuni at his birth, and it is alleged that he protected the Buddha from a landslide when he preached at the Vulture Peak.” (source)

The bronze statuettes listed above come from Tibet. They show a first face of Vajrapani. That of the Bodhisattva. In Buddhism, a boddhisattva is technically the equal of a Buddha. He got his release, he is free to continue his adventure on another level, like the other Buddhas. Nothing would prevent it. Nothing — but compassion. Unlike the Buddha who doesn’t care and thinks of him first, the Bodhisattva is touched by the ocean of suffering that makes the heart of the world beat. It is out of compassion for his human brothers and sisters that he vows to reincarnate again and again, until the last human being has got his liberation from the karmic chain.

The second face of Vajrapani is very different from the first, to the point that one can legitimately wonder if it is the same character. We will see that a little further. For the moment, I want to clarify one more point: how can a Bodhisattva, a prominent Buddhist figure, become a carrier of vajra, weapon of destruction and death? This enigma will become clearer, one way or another.

Vajrapani belongs to one of the main Buddhist traditions, that of Vajrayana. The first Buddhas belonged to this tradition, say the Buddhists. Is the Vajra Way the art of killing giants and other monsters hostile to humans? No, modern Buddhists do not believe it. They speak of vajra with closed ends, the vajra ritual object, and not the handgun that originally had its darted points. The picture above shows you both models. I specify that open vajra is not a real weapon, but a late copy, which has never claimed to work.

That’s the problem with these ancient weapons. Only representations or dummy copies are found. The crowns of Osiris and other Pharaohs of Egypt have never been found, as any divine weapons, flying machines of Egypt or India, and other valuable and dangerous equipment that the terraformers have not entrusted to the care of humans. They took them back on their mother ship. Maybe they left some samples on this planet for documentary purposes? Where would they be? In a cache under the Great Pyramid of Giza or in other catacombs? At the time of writing, such a cache remains in the domain of science fiction. But I do not despair that we discover it before my death … in a century or two!

The Buddhist tradition tells that Buddha Shakyamuni has restrained vajra. This happened during his lifetime, ie in the 5th century BCE. Shakyamuni seized the weapon and curved its tips to meet so the killer ray died out. The vajra, suddenly, lost all its powers, some of which were highly beneficial. Yes indeed. All its rays were not fatal, far from it. Some rays can heal, consecrate, even awaken people. See the lightning of Zeus: a vajra. And Zeus: a vajra bearer. See the vajra of Quetzalcoatl aka Cuchulainn – I have shown that they’re the same god. 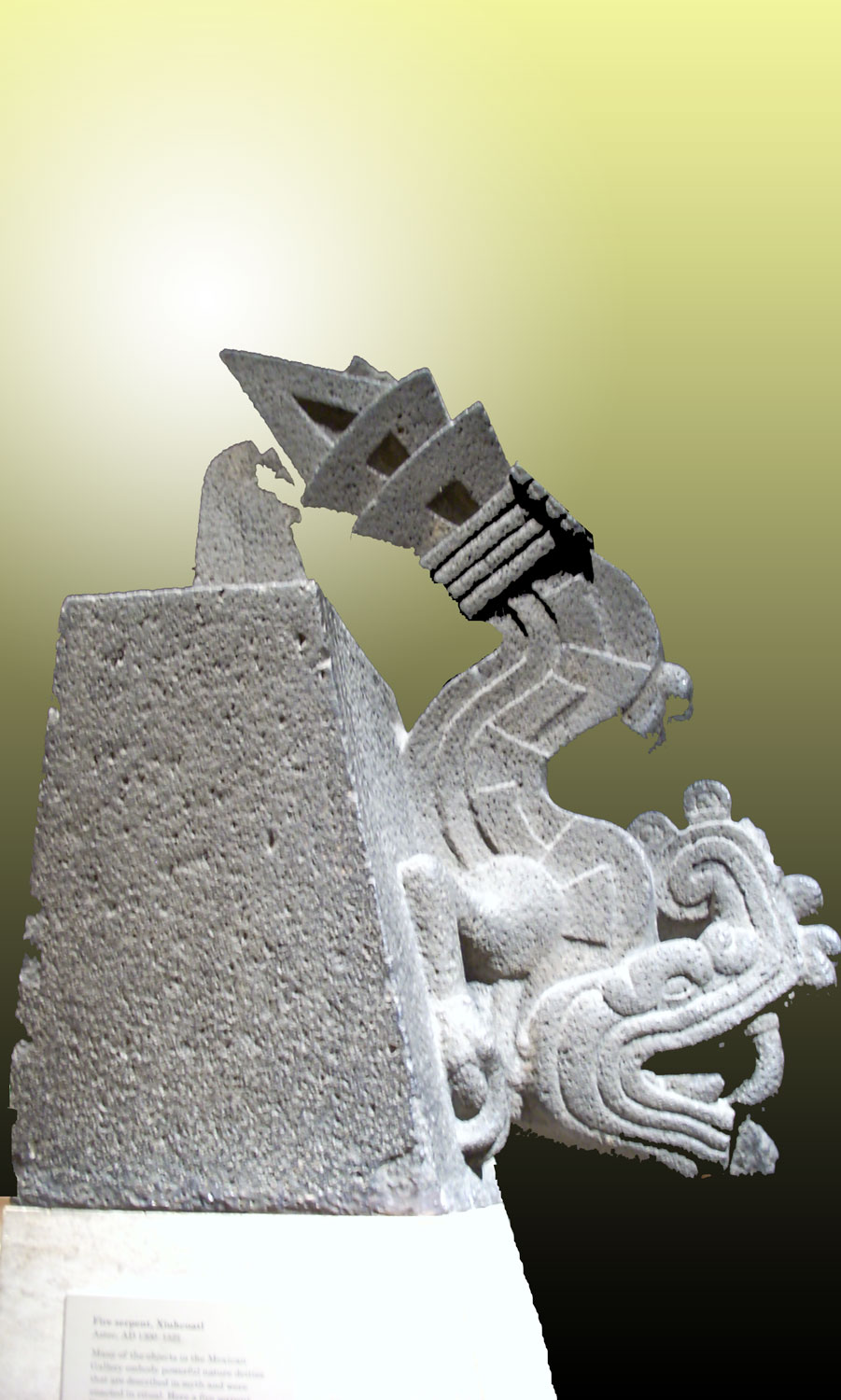 South American gods used xiuhcoatl.see picture Mind what follows. On an American website, I discovered a precious indication: how was xiuhcoatl pronounced? It is true that one can ask the question.

The answer is staggering. Xiuh is pronounced Shi Wah !! Shiva ?? In northern India where I spent monthes years ago, Shiva is pronounced in the same way, ShiWah … So it would be a weapon from India, like the god Shiva. The xuihcoatl belongs to the vajra family ….

The bas-relief below shows us another face of Vajrapani. Here he poses as protector of the historical Buddha Shakyamuni. He brandishes a kind of club behind the Buddha, or rather a vajra with closed ends. This is logical, since Shakyamuni had just restrained the weapon, Vajrapani could no longer use the first model, the one that throws rays.

Bearer of a vajra-shaped club, this colossus is the protector of the Buddha. He is often compared to Heracles, the Greek hero. Some authors have confused them. But the question is elsewhere.

Do you feel that Vajrapani has a protective attitude toward Shakyamuni? Why, how could the colossus protect the Buddha by threatening him with a club? Because, even with its points closed, the vajra remains a blunt object, and the arm of Vajrapani is very threatening …

So ? What does it conclude? It is possible that Buddha did not remove all the effectiveness of vajra. He made it harmless, but not necessarily useless. It can be assumed that his vocation as an instrument of enlightenment has not been withdrawn. In this case, the Bodhisattva Vajrapani would be the one who, thanks to the vajra, gave the awakening to Shakyamuni. 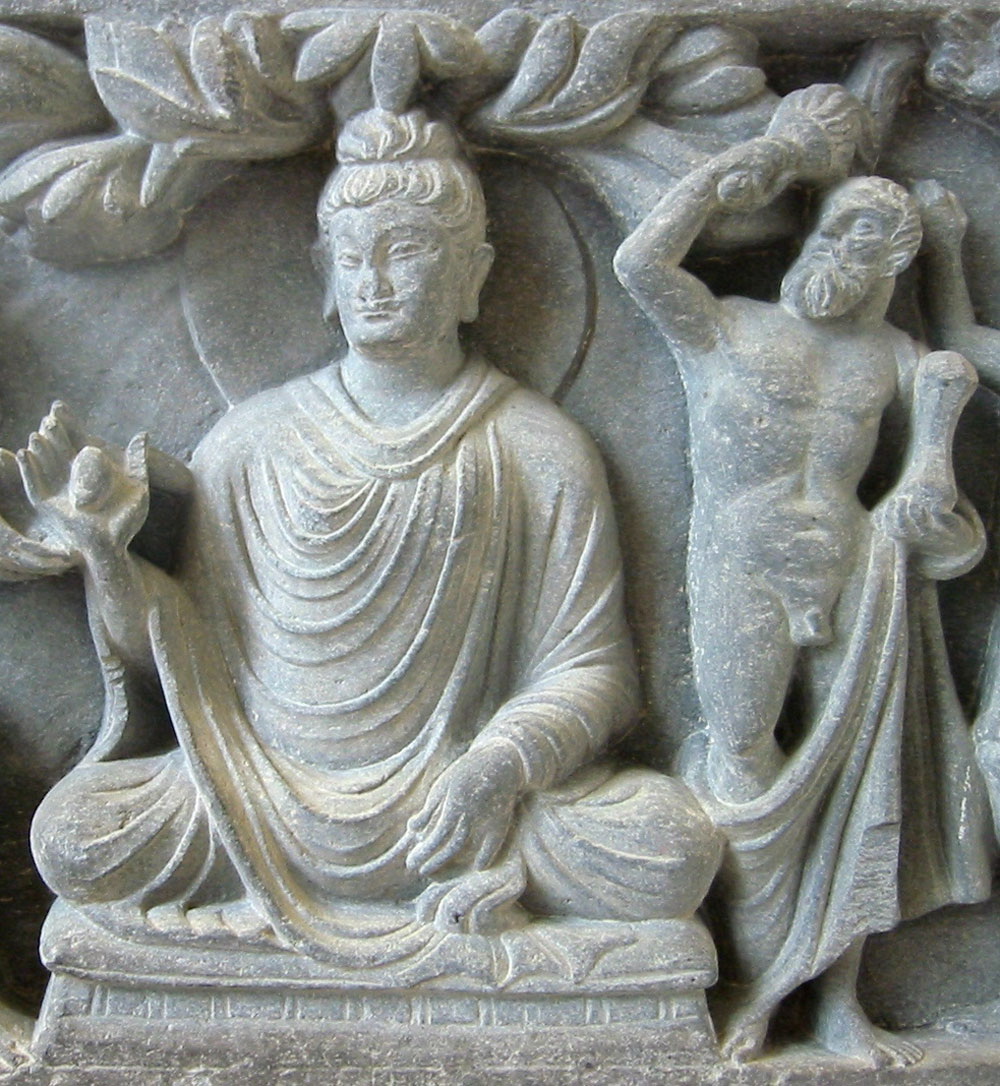 If you remember the Buddhist legend, Shakyamuni was enlightened as he meditated sitting at the foot of a fig tree. Look at the large quadrilobed leaves that overlook Buddha. It looks like fig leaves. This scene describes the awakening of Buddha.

It is therefore quite possible that the vajra of Vajrapani played a decisive role in the awakening of Shakyamuni. I had the opportunity to show how much the previous gods were obsessed with enlightenment, for them the only goal worthy of the name. The quest for enlightenment was the great cause that animated all ancient civilizations before the advent of the terrible Kali Yuga, the Iron Age where we are still, where only material values matter.

To those who wonder whether the current vajra used in Buddhist ceremonies can still awaken, I will answer this: if it were the case, there would be innumerable cohorts of awakened people in Tibet, in China and wherever they are. objects serve for religious rites. Did you notice that? The vajra as we know it today is no longer a weapon, it is no longer an awakener, it only reproduces the ancient form of a weapon whose technology is forever lost.

In summary, under various names, this ray handgun was present all over the planet. But certainly not in all hands! In Sumer, who has devoted many writings to terraforming gods, there are also followers of the vajra, the gods Adad and Ninurta, for example. Yes, some of my faithful readers have tilted on the second name that reminds us of someone else.

His name is Ninurta, he is a bearded male god, a warrior. Her name is Ninhursag, she is a goddess midwife. Their names are very close, but not their function. Ninhursag is a geneticist, assistant to the god Enki, and mother of the present human species. As for Ninurta, he exterminates the monsters. Each in his specialty, they are both part of the huge cohort of terraformers – they were millions aboard the Hyperborea ship. It’s a lot for a single god!

Thus vajra is not reserved for the gods of India, nor even manufactured for their sole use. As can be seen in the bas-relief below, Ninurta the killer god has two radiant weapons that look like vajra. They are instruments of advanced technology, that of terraformers of Sumer and all the earth. 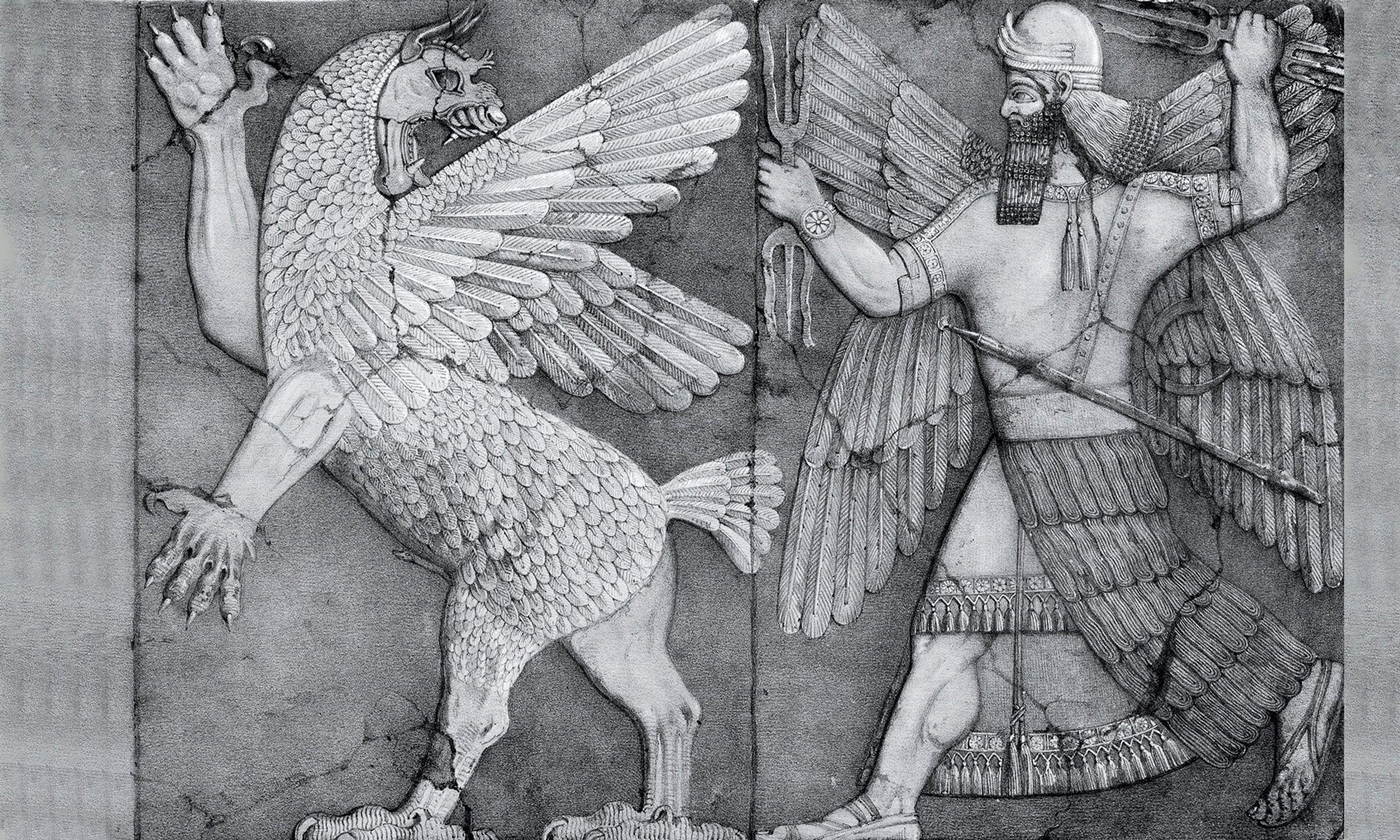