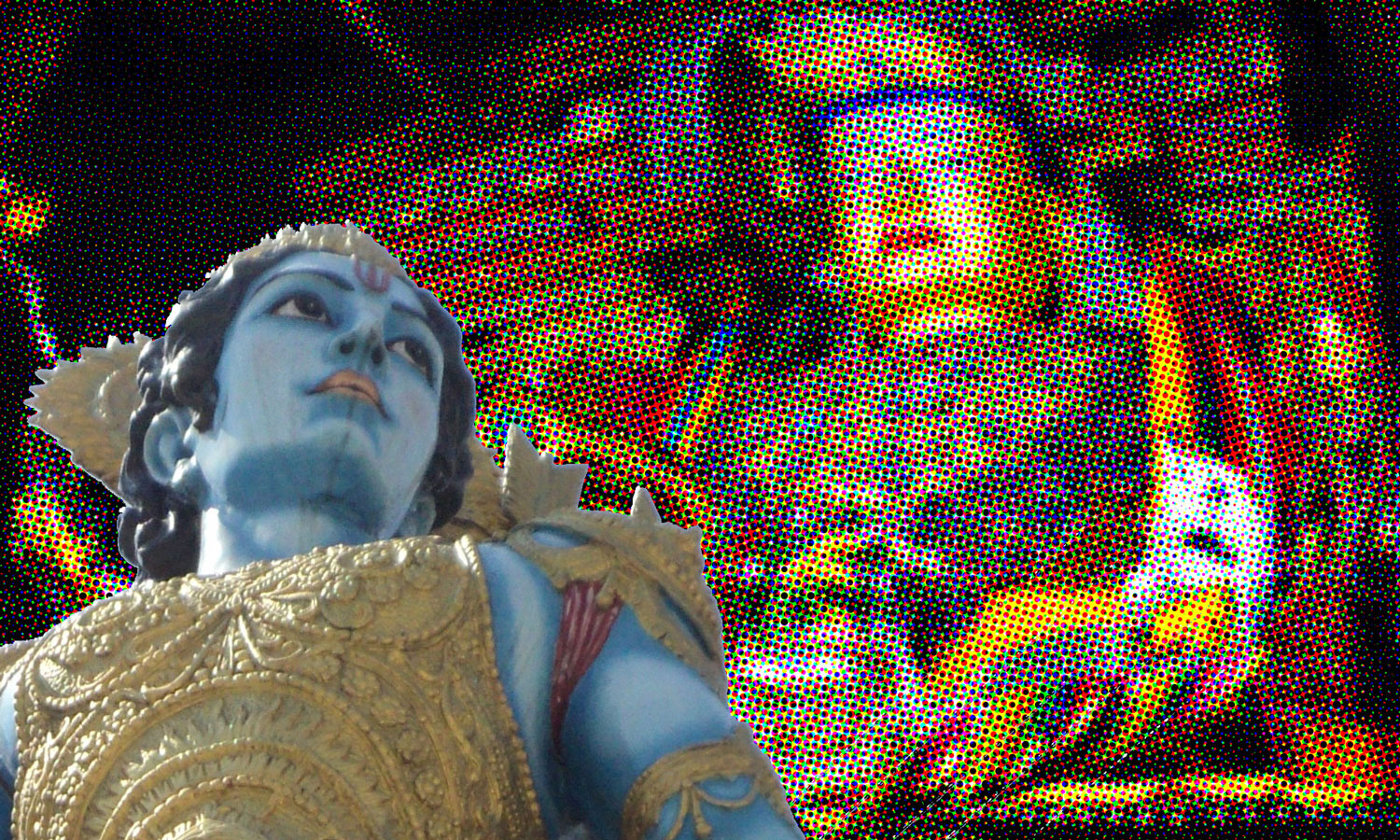 One may be surprised at such antiquity for Lamaism, one may wonder at such a difference between two terms which designate the same religion. At least in the official version, but I have another one. Everything begins with a discovery, that of Rama, his true origin, and the global role he played four millennia ago. The thing is little known, Fabre d’Olivet evokes it yet, but it seems that it only hit me. This is not a reason to laugh at it. My research and my many travels have persuaded me of the historical existence of this great conqueror named Rama. A native of Hyperborea, he conquered two-thirds of the inhabited world, imposing his law and his faith on all annexed lands.

I recounted his youth in Celtic land, his odyssey to the east, his innumerable conquests, and the last period of his long life, in India and Tibet, where he was called Lama, and not Rama, because the throats of Far Eastern people can not pronounce the letter R. Thus Rama of Hyperborea, in the 2nd millennium BC, became Lama of Tibet, founder of a religion that would mark Asia until today, being attributed to a much later sage, Sakya Muni Gautama Buddha, who lived in India in the 5th century BCE, ie 1500 years after Rama.

The Celts and Hyperboreans first conquered Asia before returning to their former Western lands, at the time of the historical Buddha, precisely.

The Buddhist religion, as well as the different shamanisms of Europe and Asia, have a common origin, Gallic druid Ramos, who became Rama the conqueror. It may seem strange that I say Gallic, since in 2000 BCE Gaul did not exist. But the Gauls, or whatever their name, were indeed at home on the lands of the West. They left, and they came back more than 1000 years later! The admitted history, lying or ignorant, considers only their return which it mistakenly takes for a first arrival.

The influence of Celticism and its spiritual values ​​has deeply permeated the world for four thousand years. Which is not nothing. Many customs come from the Celtic tradition, it is often to her that I refer to explain the origin of ours.Our traditions, do I mean

It is desirable to remember these facts when studying the French etymology, so as not to limit it to the Greco-Latin sources. The Gallo-Romans that we are have kept in their language, in their customs and in their soul the powerful Celtic mythology coming from Hyperborea. Always think of it and thank each day our ancestors the Gauls …

Now we will see that we are not alone in manifesting this influence. Hyperborea has sown all the regions of the earth. 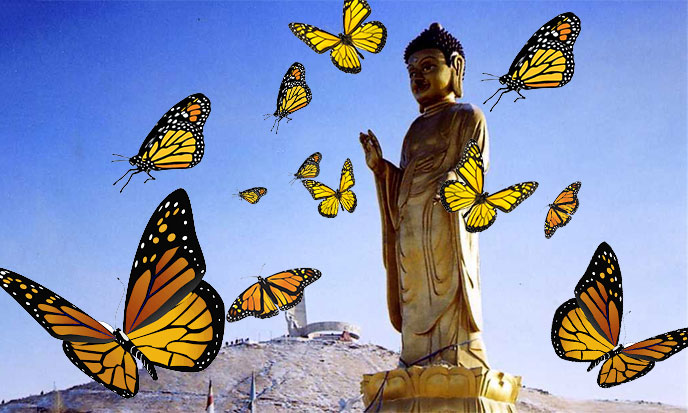 Buddhism spread throughout the Far East from the 5th century BCE, when the historical Sakya-Muni Gautama Buddha lived. This century has played a leading role all over the planet. In Asia, three great charismatic figures taught at that time: the historical Buddha, as well as Lao Tzu and Confucius. If you please!

Tibetan Buddhist monks are called Lamas. By extension, Lamaism has designated Tibetan Buddhism. But then ? One may wonder why I oppose Lamaism and Buddhism, if they designate the same religion. Well not quite. And that’s where I’m coming from.

According to some, the introduction of Buddhism in Tibet dates back to Lha Thothon Nyantsen, the 28th king of the country, in the fifth century AD. Buddhist writings reach Tibet for the first time in a miraculous way: volumes fall from the sky on the roof of the royal palace. The historical reality is more prosaic. The Indian Buddhist missionaries would have arrived at that time. The Buddha’s message will then be grafted onto a background of indigenous beliefs: the Bön religion, a mixture of animism and shamanism.

For others, the 33rd ruler, Songtsen Gampo (died in 650) is considered the first to have introduced Buddhism. It gives the Tibetan kingdom the borders that will still be its in the early twentieth century. He founded the capital Lhasa, built two temples and the first building of the Potala Palace, which will become the residence of the Dalai Lamas, spiritual and political guides since the seventeenth century. For Tibetan Buddhism, enlightenment is “the deep realization that man is one with the ultimate truth, emptiness, symbolized by the unalterable diamond. (source)

Tibetan Buddhism or Lamaism is just one form of Buddhism. We find this religion in many Asian countries, and I note that all these countries, including Korea, also have a particular version of Ramayana, the legendary corpus of the exploits of Rama. I had the opportunity to explain how the name of Rama, unpronounceable for the Tibetan throats, has become Lama.

For me the case is clear. The current Tibetan Buddhism is only an adaptation of a much older doctrine, shamanism practiced by the Böns. This old religion is issued in line with Druidism taught by Rama dit Lama around 2000 BCE. It has developed, it has taken root so much that it is part of the Tibetan soul, where many Buddhist practices and rituals are borrowed from the old Bon religion. The Bons descend from Lama disciples, their tradition was already 1500 years old at the birth of Çakya Muni the historical Buddha. Buddhism has always recognized that this Buddha was only one of a whole litany of earlier Buddhas. The first Buddha is very ancient, it belongs more to mythology than to history. The Chinese call him the White Buddha. Here then ? As a genuine Celt, Rama was white …

Like its Tibetan counterpart, Korean Buddhism is not a religion but a stream of thoughts, cults and practices. Coming from China, it is officially adopted in 372 in a first kingdom and in 572 for the last. It has easily become a natural complement to shamanic rites in practice until then. Korean Buddhism is therefore a mixture of existing shamanism and Buddhism from China. (source) Exactly like Tibetan Buddhism, and for the same reason. One could extend the examination to other Buddhist cultures, one would find the same mixture: Buddhism pushed on a breeding ground of Druidic shamanism, Buddhism is also derived from the religion preached by Rama / Lama.

But say so? Are not all the new religions intimately mixed with the preceding religion, which is called the Old Religion all over the world? And whoever in the world is a local shamanism? And that this shamanism has a lot to do with Druidic magic, and all the teachings given by druidic universities?

Why be surprised? The terraformers have spread the same teaching in all parts of the planet. It is true that the Chinese have long thought to be the only ones to benefit from the teaching and the benefits of the gods who resided up there, in the sky. That’s why Cathay, ancient China, was nicknamed the land under the sky. “Under the sun, under the sun, exactly, just below” sang Anna and Serge.Karina and Gainsbourg

And the Sun is the great luminous vessel in space, motionless above the North Pole. As for the teaching of the gods before, he was incarnated on earth by the demi-gods who are called the Sons of the Sun, in all the ancient cultures, on all continents …