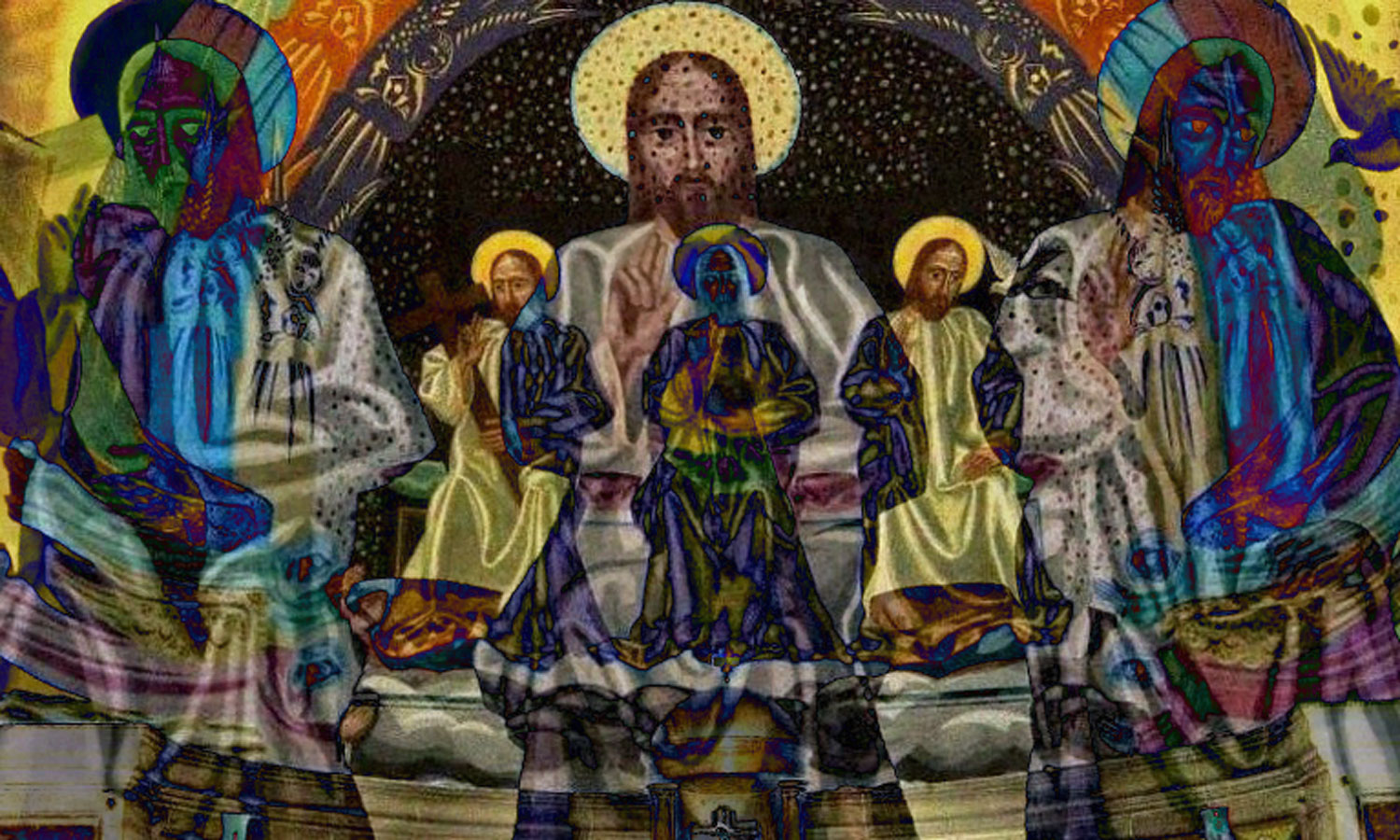 This article supposes that you have knowledge of these three articlesencore a trio! inseparable from it: Per aspera ad astra, The spaceport of Baalbek, The thrones of Solomon. You will also read with profit this second trio on the same theme: The Tower of Babel, The Spaceship of Babel, Vimana, Ancient UFO.

What is it exactly? I already mentioned it in passing, here I want to dwell on it. I believe this is the greatest confusion humans have ever had in misinterpreting the raw data of religious mythology. They are unanimous. The gods walk by three. The goddesses too, and their auxiliaries do the same. I mentioned the Fates, Erynies, Moires and other famous triolets in Greek and Latin mythologies. They were divine emissaries. These are the closest doubts to the divine trio dear to the Mayans.

This invariable trio consists of three divine entities, each with its own role, as essential, as terrible, as omnipresent. These three divine emissaries are those which the Mayans drew on their temples, and engraved on their truncated pyramids.

They are the same as those of Egypt, Lebanon, Black Africa, Asia and Oceania. These also placed their spaceships on pyramids at the flat top, on arase mountains, in a word on all the thrones of Solomon that dot our world.

Gods or goddesses, angels or demons, these three constitute the winning trifecta in order. Their nominal function requires specific training and preparation. The three are, in their order of intervention, the Trieur, the Cheater and the Tribut. They do not lend themselves to laughter. Their arrival on the elevated landing area, regardless of the country where they land, always triggers the same wind of terror on the indigenous human populations.

The Cheater matches those of the warriors Castaneda calls Stalkers. Cheating or Stalking are techniques of concealment that allow, by a displacement of the assembly point (DAP), to become for a given time someone or something else; to change at will sex, age, or appearance; to become an animal, a stream of air, a forest fire; to cross the hard rock, the soft rock, the frozen rock and the molten rock; to pierce without damage any wall whatever its material and its thickness; to go back in time; to visit the past or the future; to explore galactic confines or any astral system, even billions of light-years away. All at the speed of thought.

The sorcerer capable of accomplishing these wonders is called a stalker. The stalker acts without knowing how, without being aware of it, without anticipating it, without deciding it, without understanding what happens to him or her or what happens. Because the tracker is human. He doesn’t know what his body is doing when it shifts its assembly point, becomes someone else, and since he has no DPA consciousness, he’s convinced he’s that someone else and he’s behaving like one. When the AP returns to its original position, the sorcerer takes time to gather his memories.

The bilocation he practices is first unconscious. He will have to conquer a right of passage towards the unconscious, that is to say the body. Such a thing occurs only in the awakened. The perfect memory of the personal past, including past lives. The ability to evolve across the entire timeline.

The warrior who travels all along his timeline is a wall-pass that shows us the way to go. (Lao Surlam)

The average human uses at best only 20% of his brain capacity. His creators have restrained him. His brain has been slowed down. The intoxication of the superinformation completes the cretinization of the masses. It was much worse when the gods walked among men. The latter were obtuse, crushed by divine superiority. Sorcerers, warriors of light and awakened have an intermediate status between the human and the divine. Many human for a hair of divine…

Unlike the stalker, the cheater is 100% divine. He follows other rules. Pure light, absolute consciousness, a divine knows what he does, decides everything, predicts everything, remembers everything. The human cannot lie to him or deceive him in any way; the human can only obey him. The divine has no unconscious. He knows without veil. No restrictive programs have been implanted in his brain. No brain jamming or restraining. A divine uses the totality of his psychic powers, he enlivens the totality of his grey matter, which is virgin of any soothing, stupefying, terrifying program. Nothing and no one to hide the truth from him, unlike us.

The Sorter is responsible for separating the wheat from the chaff. He examines one after the other all the women of the tribe. It examines together all children and adult males. These rapid but comprehensive examinations certainly allow him to point out to the other two the culprits, the soon-to-be-culprits, the dubious and the undesirables. They will all be eliminated.

The Sorter is a supreme judge, without trial, without instruction, without defence and without appeal. The sentence is enforceable immediately. It is the third emissary, the Tribut, who will take charge of it in the sight and knowledge of the whole tribe gathered for example.

The Tribut is the executor of high works. Both prosecutor and executioner, he proceeds to the total elimination of the culprits designated by the Trieur. This is done with a beam launcher, which is either a handgun, or a crown or tiara directly controlled by the cerebral impulses of the Tribut. For more details, see the article entitled The Crown of Osiris.

When a human displeases the gods, he always has a tribute to pay with his life. That is why we call the divine emissary in charge of presenting the addition.

This expeditious method has given excellent results both on Terra and on all the terraformed wild planets. Let us not forget that the practice of terraforming is extremely old, a few billion years of experience have made terraformers as well administrators, relentless police officers, undisputed masters, feared by the populations they have created and are responsible for.

Coming from higher up than our former little gods, bodies of inspectors, or rather inspectors, are responsible for verifying the proper functioning of terraformations and compliance with the rules as decreed by the Great Gods of the Galactic Centre. The female inspectors also move in threes. They know how to be as expeditious and as relentless towards the former gods as these ones are towards the human populations, their flock.

A woman is an accomplished man. (Claude Lelouch) 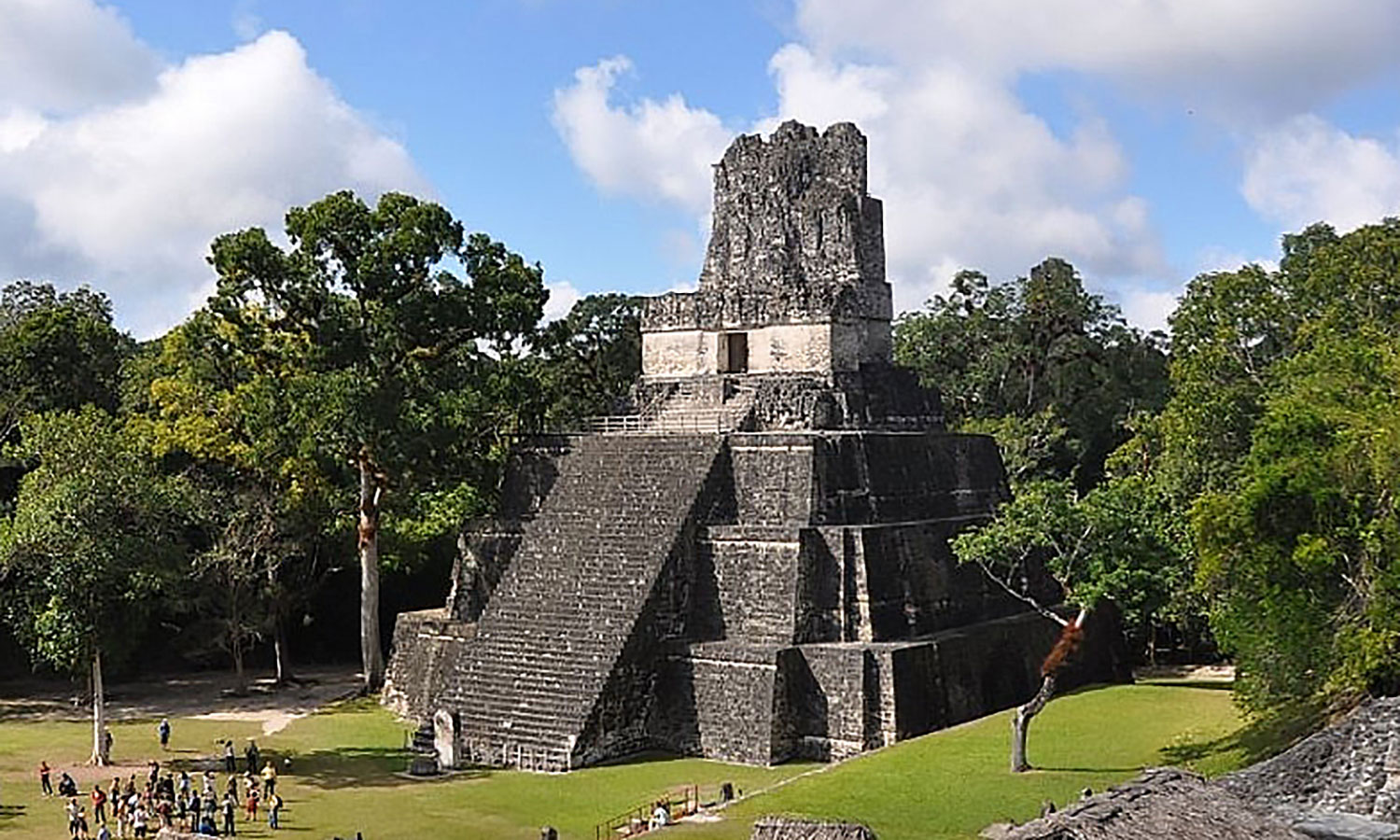 In this photo we can see the three divine figures above the temple at the top of the pyramid. They are very eroded, the details are erased by the millennial rains, but they still reign where once landed the shuttle of divine trios. The staircase is original, it allowed the gods to descend among men. Mayan version of Jacob’s ladder … But the temple at the top and the divine statues above it were added by humans after the gods had gone.

Homage or precaution? Did they want to honor the former gods or to prevent them to come back? Big question! Some know the answer.  Others are chuckling …