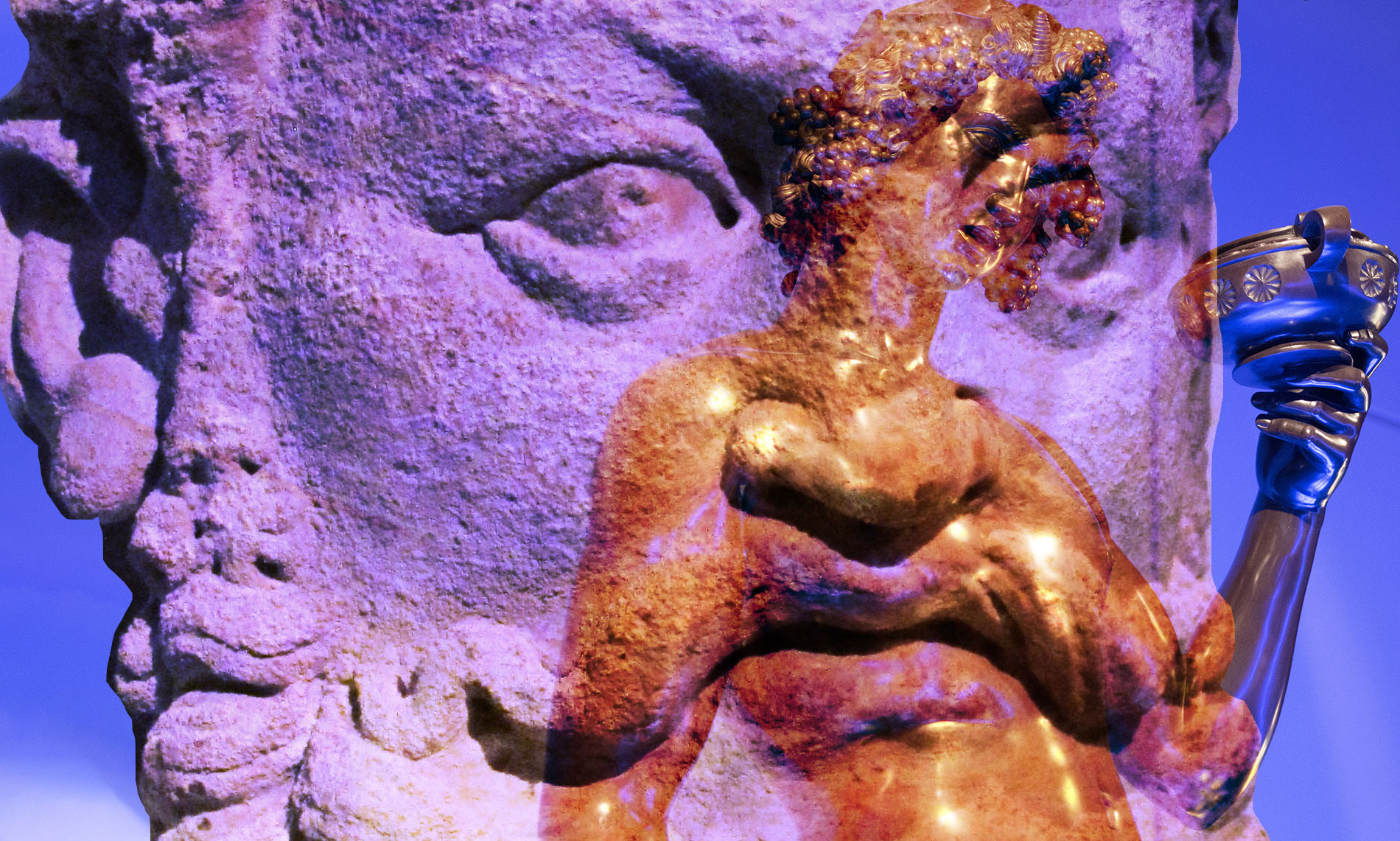 Panic on board! An immortal is dead! Fate does not agree. The three Fates Sisters are remorseful. How is it that an immortal can swallow his birth certificate, break his pipe, bow out, leave ad father, pack his trunk, succumb, stall, clamor, die, slap, cane, die, perish, break , to pass, to pass away, he who is made to last forever?

Let us face the facts. The immortals are not what they used to be. See the Académie Française. It is full of them,they are called The Immortals … but they are old and yet it empties so quickly. And us, poor of us! Who still believe in eternal life! If it were possible, don’t you believe that the gods before, so ancient, so learned, would have found a way to achieve it?

Zeus is dead, long live the new God of the Gods! exclaims the designated heir in the face of resigned Apollo. Bacchus is drunk as usual. Ridiculous, he staggers, while his double Dionysus tries to save some semblance of dignity. But the slime oozing from the corners of his lips betrays his greed.

Or his intoxication? Bacchus is still drunk. Apollo, younger than his half-brother – and above all more reserved – is careful not to show the slightest euphoria in the strict silence dictated by decorum. After a moment that can last for centuries, Dionysus has brought Bacchus under control and calm returns.

Offset of assemblage point. Each consists of a face. Again consternation is painted on all divine features. We will settle the account later with Bacchus. In the immediate future what matters is to be seen well by the new tyrant. Long live Dionysus! say the eyes that sparkle under the feigned sadness. Laughter instead of complaints. Smile at the edge of painted lips. Middle finger at the heart of the joined hands. Clashes under the embraces.

The only one who seems genuinely affected by Zeus’ death is his favorite daughter, Athena, who has so often sided with little humans and defended them in the face of paternal wrath. Besides our protector, she is our true mother. In love with our species from the outset, she begged Prometheus to give us a privileged status. Thanks to it, we have an individual soul, while animals and other hominids have a group soul, the egregore of each species. We don’t know what her uncle asked her in return, but since Athena has a soft spot for him, I imagine she didn’t have to beg to jump at the chance?

Dionysus is a double god. The Romans retained only the drunkenness and debauchery embodied by his Latin name Bacchus, while the Greeks understood his existential nobility, the sacred drunkenness and the coitus of awakening, because in them still lives the soul of the Old Religion. By comparison, Rome is a heavy pig.

The 20th century has cultivated a curious point of view on Greco-Latin antiquity. The Romans were thought to be first and foremost warriors. They master the art of war and that of the administration of their vast conquests. The Greeks invented everything, we believed them to be the origin of logic, medicine, poetry, tragedy, sculpture, frescoes, mosaics, pottery … No doubt also music and dance, but we can only suppose so, since there is no trace of both.

Ancient Romans and Greeks are not worth these bogus clichés. No, Greece is not at the origin of what it transmitted to us. It was copied from forgotten texts, all burned by barbarians. What Greece has transmitted contains misunderstandings and other distortions. No, the Romans are not just conquerors. They had engineers who built mind-boggling hydraulic machines. They had architects who erected many temples and theaters, but who also knew how to fit the dwellings with a comfort comparable to ours: underfloor heating, running water, panes in the windows, rugs, precious furniture, elegant weaving, refinement of marble walls, of bas-reliefs and frescoes, subtlety of mosaics – so many arts inherited from Greece,and the Celts, the Sumerians and Egypt — but pushed by Rome to their highest degree of refinement.

The paralleling of these two ancient civilizations dominated the 20th century. Today four or five more civilizations are linked. Alongside Rome and Greece, we consider their sources: Egypt, Sumer, the Celtic countries, Atlantis and Hyperborea. The refinement of the Celts and the Gauls was imitated throughout Europe but remained unmatched … However, I hold Hyperborea as the primary source. From there came the former gods — Olympians or Elohim — they are the same anyway. For the time being, lost far from home in the immensity of the Galactic Heart, they pretend to mourn their former master.

The funeral of Zeus, exceptionally, may take place on site. Which suits our divine delegation, since they couldn’t stand lugging around the body of the divine deceased all the way back to Earth. As we have said, from the Heart to here, it’s been a fucking hard travelling. – Okay, but if we do that here, we can’t send out invitations. The funeral of the great Zeus will be very small. In the strictest privacy. As if we were ashamed.

Bacchus emerges to put on a layer: – We shit shame, that’s the truth. Hand me the galactic ambrosia, we’re not going to die of thirst on top of that!!
– I want us to be ashamed, and how! Talk about a stupid end! What a lack of dignity! said Athena
– And what a lack of ambrosia !!

– Asshole Babac, aren’t you tired to drink? I won’t give a damn about the galactic ambrosia! You piss us off. At least respect Papa, failing to honor your mandate! (lacunar text) Dead, you are going to achieve what you did not know how to do during your lifetime: reconcile men and gods among themselves, all agree to kick you out.

– (lacunar text) redo a more auspicious burial on the return to Hyperborea, suggests Dionysus. No need for the body to celebrate a dead person. Just get them drunk, everyone laughs, nobody panics. (source)Apollo, Voyage to the Galactic Center

Yeah, that’s clever, let’s do that. All the gods smile at him. Dionysus hangs the pole.happy him! 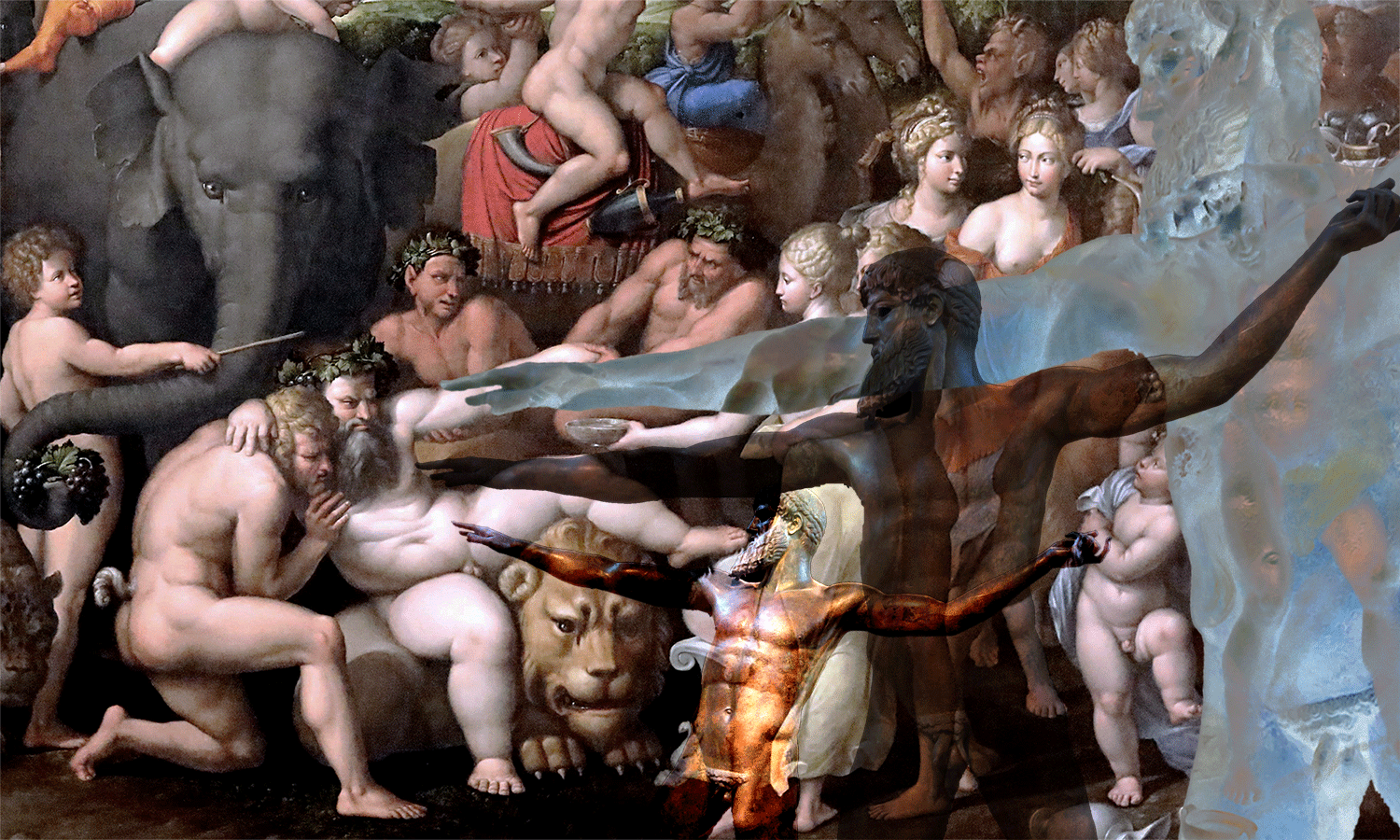 The ceremony is quickly dispatched. Bacchus even offered a wine of honor in his honor. Whose honor? From Zeus or from the donor? We landed on a patch of grass in a park where each blade of grass was stronger and taller than a giant sequoia. We drank in a hurry and we broke quickly. The size of the insects here encourages us to withdraw.

In the toilets of the Great Gods, a miniature vivarium presents climbing plants which are more welcoming. This is where the whole gang ends up, slumped in cabbages, after a laughing climb on the walls of the vivarium. Bacchus broke his mouth, which made us laugh. He also broke a good amphora, which made us cry.

Dionysos smiled back at us by revealing a whole cart of rare and precious wines. From there, things took a devilishly Dionysian turn. Drink, bend, kiss, eat, stuff, drink, drink, disappoint … It’s Bacchus in the text. No one else ! Damn god of gods, we haven’t finished decadence! Back-Us is god of us (source)Apollo, Voyage to the Galactic Center

You must always be drunk, everything is there; that’s the only question. In order not to feel the horrible burden of time which breaks your shoulders and leans you towards the earth, you must get drunk without respite.

But of what? Wine, poetry, or virtue as you wish, but get drunk!

Such is wisdom, such is religion, such is the philosophy of Dionysus Bacchus, the double god who every time doubles his stake by getting awake. Bacchus does not offer a discount, he does not stand any offence, and does not speak any nonsense. Oh yes, the fool he plays, nonsense he says. What a deplorable example for our fine youngsters, Apollo laments, filling down his giton. The customs of these people are far from ours. The flavor of their caste is to be pederast. In Rome do what the Romans do. Dee dee doo.

Other times, other manners. The light that dies. In defiance of tumors. To cover up the rumor. Smoking compartment. Employ the unemployed. Wake up sleepers. Embark the rowers. Land the rhymers. Undress the show-offs. Either you live or you die. It all depends on your eye.

The reign of Dionysus is something the ancients kept hidden. It is necessary that a little respect remains in us for the former gods. Gods know however that they hardly deserve it.

Gods have mercy on me. From the depths I cry to you Lord, listen to my prayer. Ifever one of you as a little time for a little one, I am the Queen of Earth and the Empress of Universe. So spoke Ereshkigal, the finest piece of a gal. 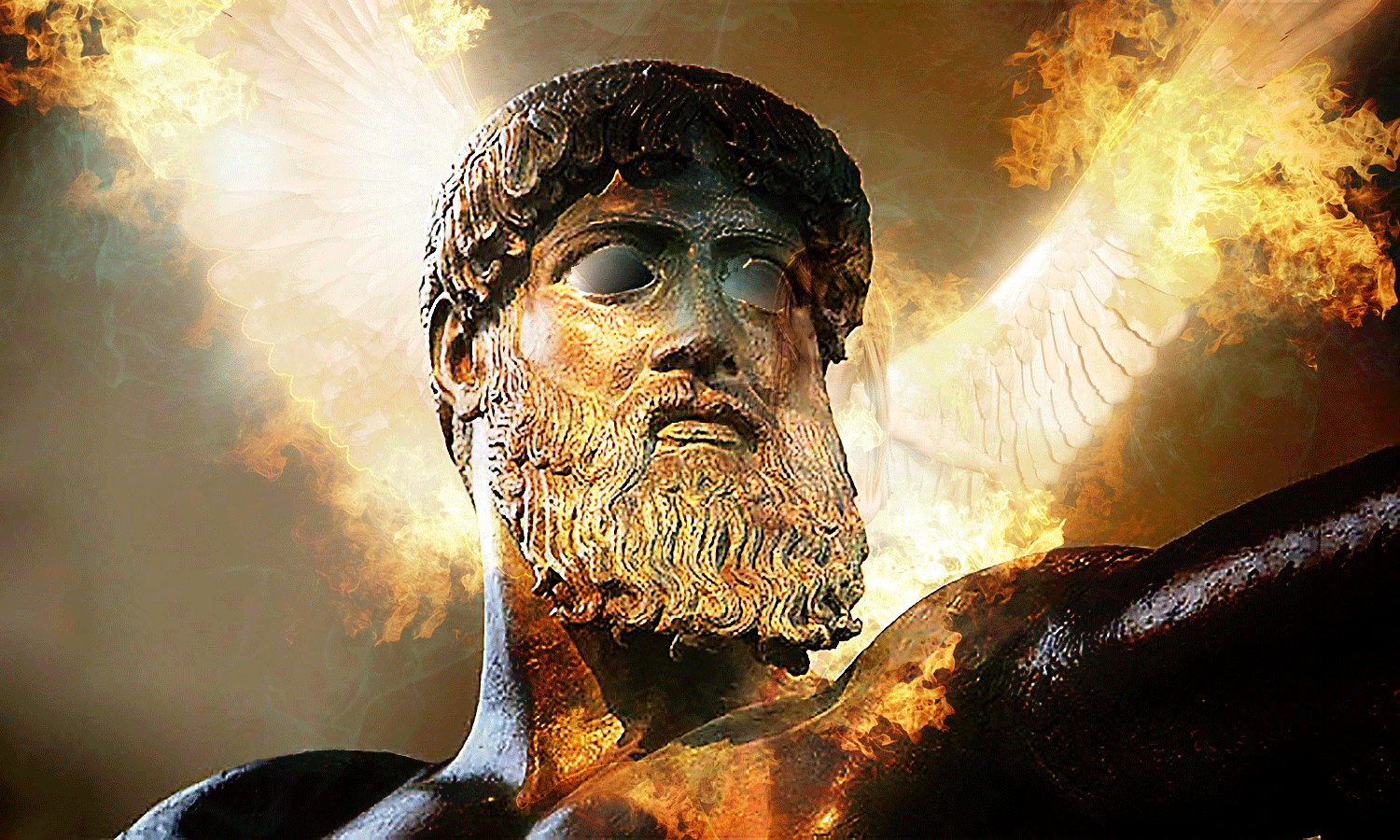 There is on this site another version of the death of Zeus which offers him another successor, Apollo – this is what ended up happening. Driving drunk is very nice, what are we kidding just before the accident.

The spiritual life is the awakening of our essential nature. It gives us the qualities of being so badly needed by modern man: silence, simplicity, serenity, confidence.