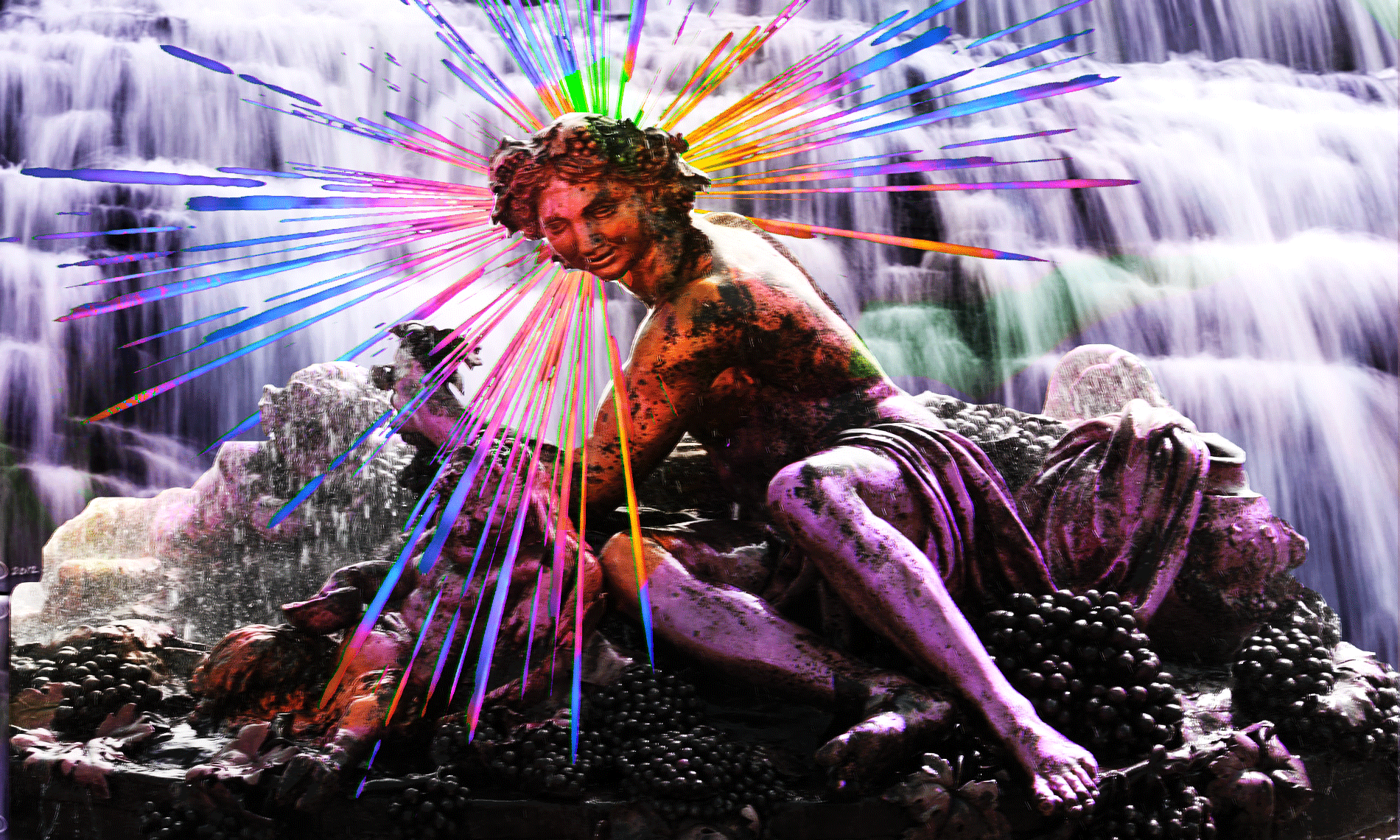 Dionysus is a fascinating god: half-god by birth, but double god by his second birth. Sometimes considered by the Greeks as an Asian import god, Dionysus resembles Rama very much. Like him, he went as far as India, to come back filled with miraculous powers, showing all the qualities of a great head of state.

For me, Dionysus and Rama are both made in Hyperborea, raised and learned by the gods to live a prominent fate. This is evident when facing Dionysus life. Young adult, Dionysus won the jackpot: he who was half human, he is accepted by the all-powerful gods of Olympus and becomes the second god of the gods, direct successor of Zeus – or rather of Hera / Hathor, the great goddess. Emperor of the world like Rama who resembles him, Dionysus has more than one trick up his sleeves, as I showed in another article. Here we will see other facets of this protean and fascinating god: his birth and his childhood, beyond the myth, or rather myths that diverge and contradict each other …

Let us understand that the various mythological stories have been transmitted orally for generations, translated from language to language and distorted by endless lineages of storytellers before being written over long periods of time, by people who had never known them before. Golden times were evoked by writers who did not have the smallest idea of ​​the true technological and magical grandeur of the beings whose story they claimed to tell. This gives most myths a strange appearance, some details seeming too zealous to be honest. But behind the cracks of the facade there is a raw material that speaks to the deep memory of the sensitive – oh yes, the seers recognize each other. My humble job of mythologist ant is to decipher these warped legends to bring out the other history of human which is hidden inside. This is my way of perpetuating the beautiful role of smuggler/passer-by that I had the honor to interpret for fifteen years. Everything is in it.

“Dionysus is the only god born of a mortal mother, Homer and Hesiod present him as the son of Zeus and Semele, of which she mingled daughter of Cadmus king of Thebes and the muse Harmony. that she knew only in the darkness, Semele asked to contemplate Zeus in all its majesty, unable to endure the brilliance of his divine vision, Semelede, who did not look at her dead, and Zeus pulled his son from the belly of his mother and, slashing his thigh, sews the child to lead his gestation  (source).”  Completely disgusting. Really too much. Perfect example of an incongruous detail –definitely too strange to be honest– which always reveals a misunderstanding.

Let’s see how this legend has been distorted. Zeus had two ways to give birth, by nature or by genetics. Three ways, even: he also rammed by the power of his lightning. His children were born from either his thigh or his head, teaching us mythology. The interpretation I give is the following. For modesty and metaphor, the Greeks used thigh, or nerve of the thigh to designate the phallus. The children out of the thigh of Jupiter are the children born of his seed. Other children come from his head, like Athena, “born all armed out of Zeus skull” (source)Hesiod, Euripides, Homer and other temporal pirates. He designed them using his intelligence, through genetic engineering. Athena is an in vitro creation, a laboratory offshoot … which does not affect her divine status. But there is another version – at least one! – of the birth of Dionysus.

“In the Orphic version of the myth, Dionysus-Zagreus is the son of Persephone and Zeus, and Hera, jealous, asks the Titans to get rid of the newborn, so they cut Dionysus into pieces and cook it in a pot. Athena, however, picks up her heart and gives it to Zeus, who then fertilizes Semele, and in both cases Dionysus knows two births, which explains one of his epithets, δίογονος / díogonos, “the twice-born”  (source).“ 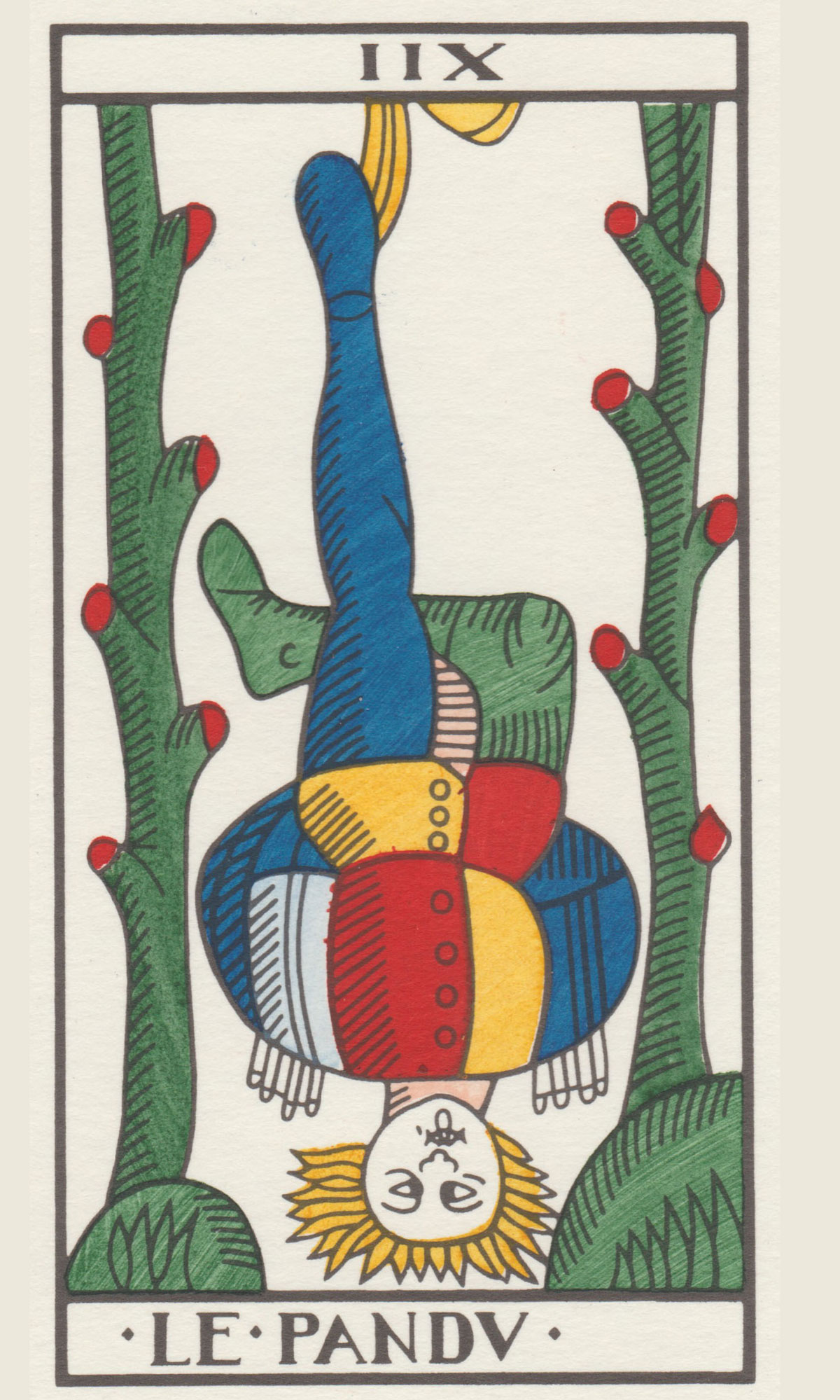 These two births make Dionysus the god of rebirth and eternal renewal. By lightning and flesh, Dionysus is doubly the son of Zeus, as can be found in his name himself: Dyonisos, twice born. In French, the name René says the same thing. The second birth evokes an initiation, that of the great mysteries, which corresponds to the arcane XVI of the initiatory Tarot, THE TOWER. There is a birth in the flesh and a birth in the spirit.

Known as dvija, the double birth plays a dominant role in Hinduism: “The “stages of the life of a twice-born man” are treated in the Laws of Manu. A caste member of the Dvija must undergo four periods in his life: first, he will be a student Brahmacharya; then housekeeper Grihastha; then he should live a Vanaprastha retreat; and finally, as Samnyasi’s ascetic   (source).”

The double birth … The sign of the initiate. Twenty years ago, fun images made a splash among 3D enthusiasts. Looking at them in a certain way, we could see a raised image appear which was totally invisible. It was necessary to squint in a certain way, the two eyes approaching one another: convergent strabismus say the ophthalmos. The same strabismus allows to see double, when we do not look at these hidden images.

To see double, to see in relief, to see what is hidden, such is the secret characteristic of Dionysus. One can judge on the arcana XII The Hangman, image opposite where the hangman squints in the same way. This man hanging from his feet represents Dionysus himself, as I explain in the article Dionysus son of God. 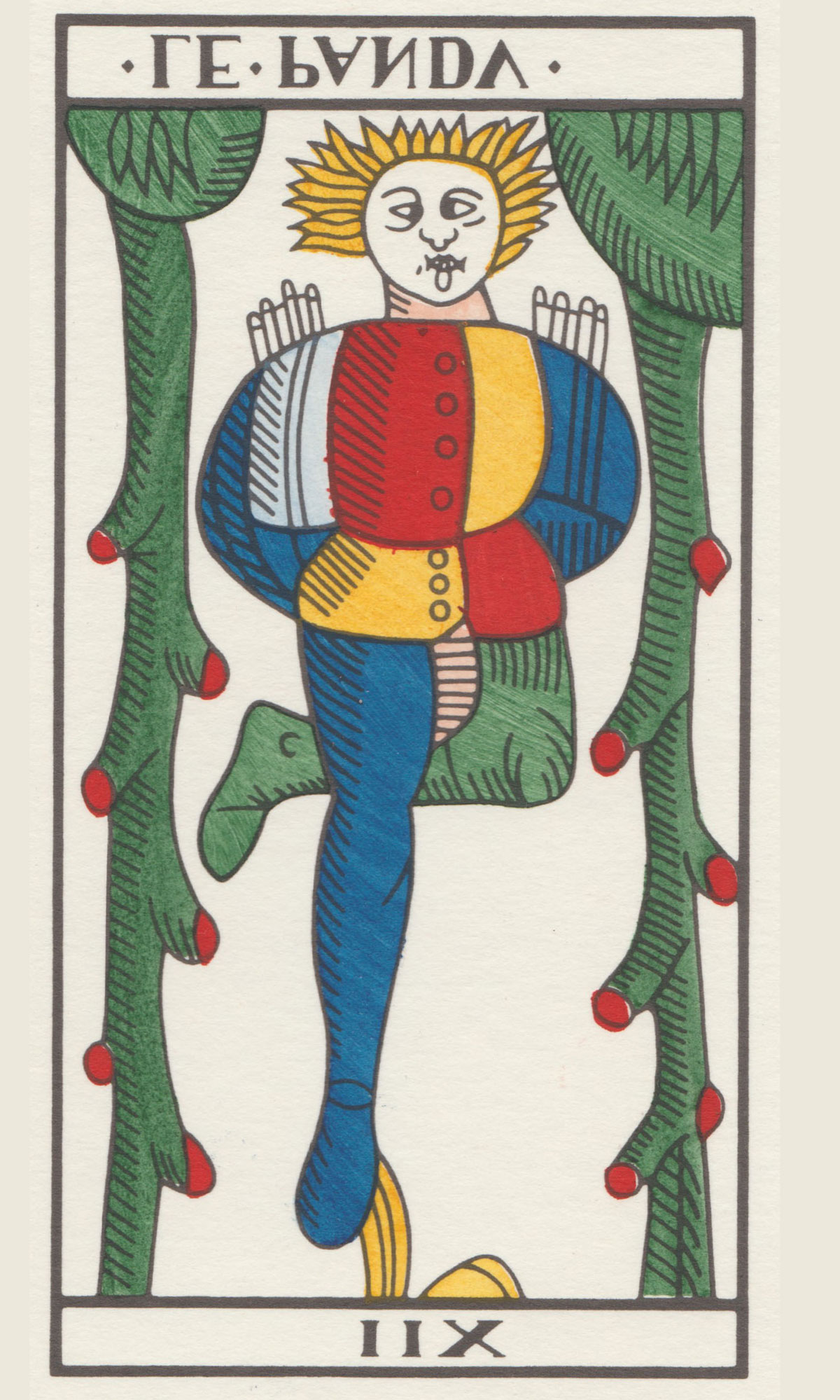 I left several puzzles without explanation, which had the gift of annoying more than one reader. Come, my good friends, do not despise riddles when they are offered to you. You are able to solve them on your own. I scream to repeat that I am a storyteller, not a master of thought. I claim the right to deceive and contradict myself. Be sure that my opinion does not matter to you, believe me, it counts infinitely less than yours.

But I’m good prince, I give you a second key. The Hangman XII is upside down to encourage the card to be flipped over. Turning it back, we find that the hanged man, after his death on the tree, goes to heaven to join his father Zeus. Hence the impression that he is levitating, barely restrained by a cord that does not tie around his ankle but seems simply stitched to the sole of his leotard. It flies, I tell you, this son of god, this perfect model of Jesus! And he, Dionysus, went down to hell, and he came back, like Orpheus. Jesus did not do that, it seems to me. Forgotten bishops, probably …

In the meantime, what is he eating? It would be almost scary. Doubly yours, with his eye that says shit to the other … Everything is double at home, including his gift of double sight. His name means twice born, I told you. But in the language of Goslings, often more relevant than the cold etymology, Dionysus name means quite a different thing … Two different things, of course!

Still young, Dionysus must protect himself from Hera’s jealousy. He is first entrusted to his aunt, but Hera pursues the little bastard of his revenge, as if she feared that this divine offspring would one day take his place. We remember that Zeus’ father, Cronos, devoured his children to protect his crown. It was done a lot at the time. “Dionysos is then led by Hermes to Nysa, a mysterious place that some liken to Mount Nysion in Thrace, others like Herodotus to a city in Upper Egypt.”  Nysa, mysterious city, also means: young girl and nysos: young boy. Dios is the genitive of Zeus. The language of Goslings gives these two possible translations: “boy of Zeus” or “god of Nysa” …

Double god Dionysus was born in 2018 BCE, December 25th. Christmas born like little Jesus! Dionysus is therefore a native of Capricorn … which is not a double sign, oddly enough. Solar: it is the winter solstice, the rocking of the year when the sun goes up in the northern hemisphere. Lunar: it is also the affiliation of Dionysus to the singular clan of the horned gods. The horns are antennas that connect the horned one with transcendence. The ancient wizards, the shamans, the Devil of the Arcana XV, but also Moses or Abraham are represented with horns. For the familiars of Eden Saga, the horns are reminiscent of the horned god par excellence, ie Ram the Aries aka Ramos aka Amon-Ra aka Rama … For the familiar of the sacristies, the horns are the attributes of the devil, and all trembling, these too pious people make the sign of the cross. Criss-cross what you want, that’s it. Every new religion imposes its new god while demonizing the former god.

Is Dionysus Rama himself or a member of his army? A general, a sorcerer, a close adviser to the great emperor with ram’s horns? To escape Hera, Dionysus is transformed into a kid (source). The kid is the little goat, not the ram. And after ? Dionysus is also called the sheep and the lamb of God, just like Jesus two thousand years later. The Lamb is Lamb, or Lam, or Lama, the name that Rama took when he retired to meditate in a Himalayan temple near Lhasa, Tibet.

Is Lama son of Rama? Wait a minute … If Dionysos is really the son of Rama, it simply means that Rama is Zeus, Yahveh, the good God himself, by His sake, no joke, I could faint! … Hare Rama, Hare Rama, Rama Rama, Hare Ram !!! sing some strange men in their orange negligee.