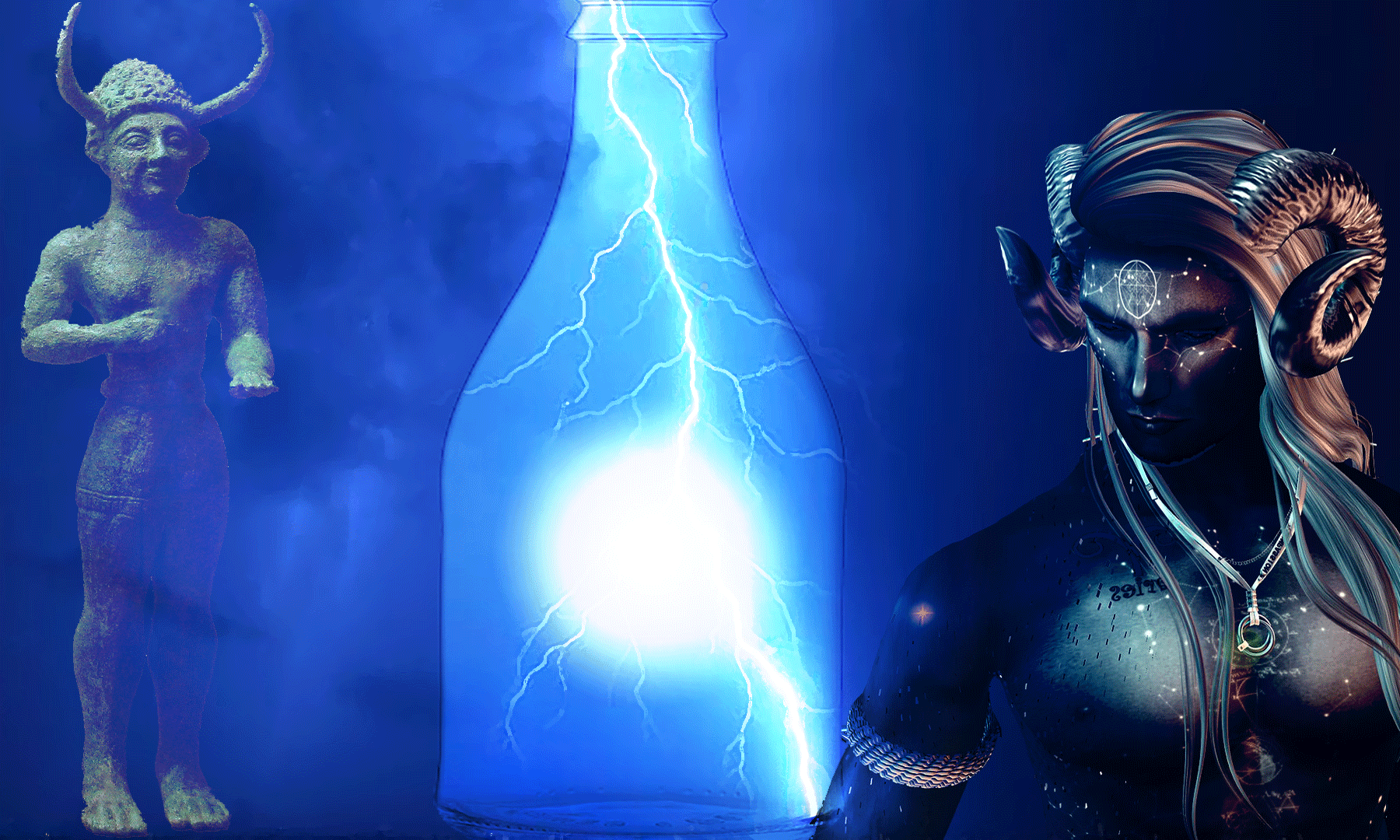 The idea would be to try for the second time to bottle lightning. The first time Rama did it. Transmitting his instructions to the best of engineers, he succeeded in the miracle of confining the omnipotence of ball lightning in a transportable form. This time, it would take a pure genius to repeat the feat. Who is not me…

I don’t have any of the qualities that make an Einstein or a Tesla. My dispositions are quite different: I invent. They too are true. In this case we are close. But they use tools that I do not know the use of: mathematics, physics, and other sciences anchored in the right side. These two mighty geniuses are of this world, so we are different. I’m still in the worldfor how long? while having already left it. I lived many deaths during the twenty-two previous lives that I found during arcane XIII. Twenty-two times deceased as a woman or man, because I have inhabited the bodies of both, martyr or sage, saint or murderer. Engineering is beyond my competence.

It would take a pure genius who still has both feet on this beautiful planet. A man of this century or the next – it doesn’t matter if he comes after I’m gone, as long as he comes. Here are the instructions I give him. They take the form of a tale. My favorite style when it comes to god. A god without a capital letter if not for the man created in his image. Yes, heaven make my tales lead you to a tiny god, this personal god who sleeps in you. Snake coiled in your sacrum, it awaits your awakening. This patient god can hang around for a hundred thousand lifetimes, whatever his desire to see you evolve, whatever his desire to find his double. Who is you. For the mother and child reunion is only a moment away. (listen)

Prince Rama was one day flying over the Pacific Ocean, heading due south on board his aircraft, the Golden Fleece. Rama the ram god named her so because her body is made of a material that shines like gold, although infinitely more precious. A metal that the Greeks called orichalcum. Its exceptional properties of selective conductivity and shape memory malleability make orichalcum more valuable than all the fabulous materials developed by the Gods of Before.

As for the word Fleece, the stealth vessel is covered with a flexible and comfortable material like the fleece of Aries her model. The reflections of the sun on the orichalcum dot it with small curly strands that perfectly evoke the silky wool of the beautiful animal.

This fast machine circles the Earth in a few hours, as long as it gains a high altitude. In space flight, it can also rally the wandering planet, Hyperborea Nibiru, the gigantic mothership that served as an advanced base for millions of terraforming gods.

Hyper manoeuvrable, the stealth jet explores the canyons, jumping the summits, hovering at the level of the steppes, even flowing with the eagles because it moves silently and without displacement of air. The Golden Fleece is the favorite toy of the divine Prince.

In spatial configuration, she is more than thirty meters long to accommodate ten passengers. But in closer flight, she becomes a single-seater with the appearance and size of an ultralight. The technology of the Former Gods surpasses ours by billions of cubits.

But there was still a weak point in the admirable design of his special spacecraft. Fueling. The Fleece sucked more than 20 kilotons of microzergs (mzg) per mission, and her load capacity doesn’t exceed 18 kt / mzg. Fucking weak point.

This time he had picked up a nasty magnetic storm with a whole panoply of horizontal lightning which had discharged all her batteries. The Golden Fleece was only flying one wing when the coast of the Yellow Islands came into view. 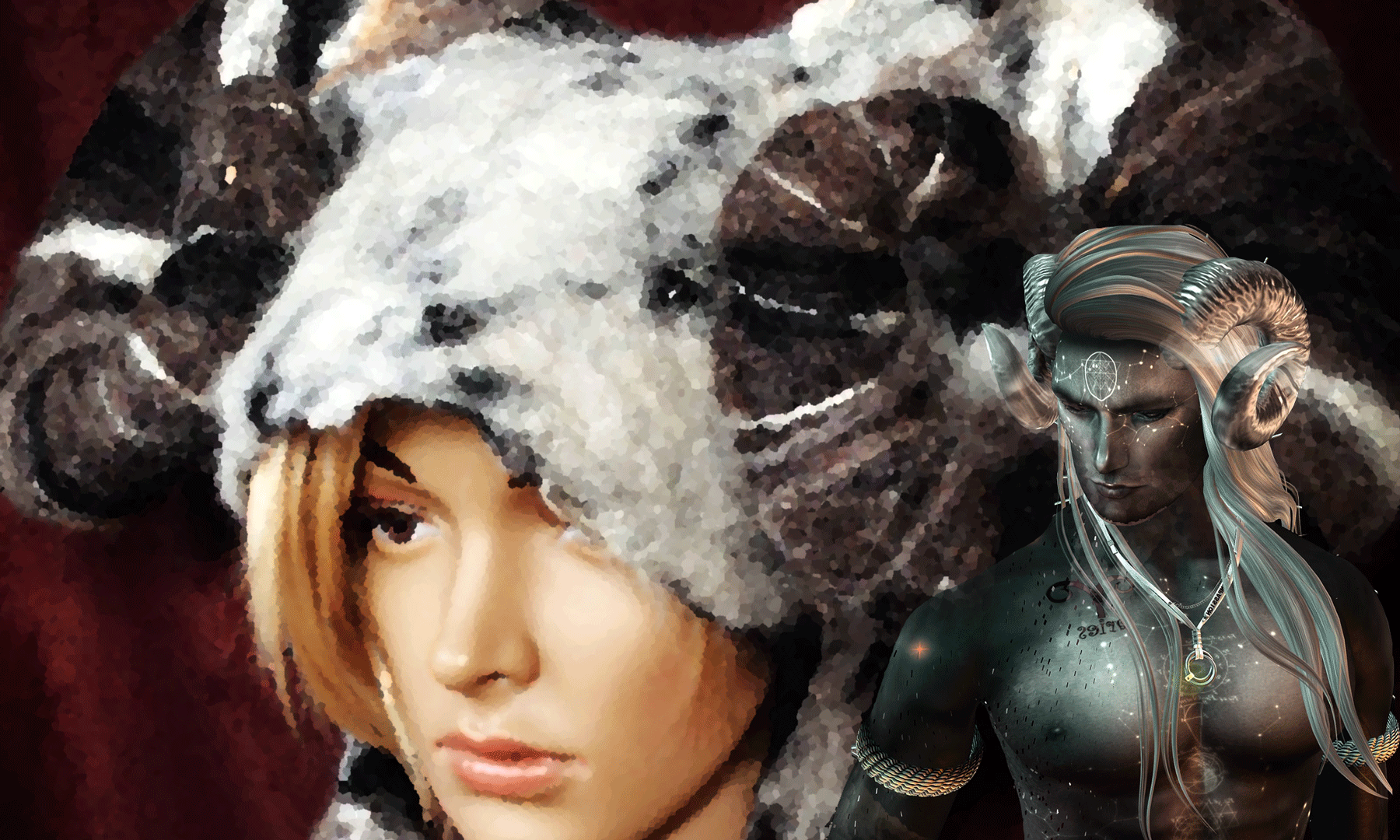 Rama rarely ventured so far from any supplies. The Antarctic Islands – also called the Yellow Islands because of the grilled color of the meadows – are away from the main air routes. A routine mission required his presence with the Cyclops, the last descendants of the Golden Race who ruled this planet for nearly two billion years.

The Cyclops of Rama’s time were only pale copies of their early ancestors. However, they are insane in size and their strength is limitless. They lift mountains, divert rivers and shape landscapes as they see fit. They are the masters of lightning, prodigious engineers and gifted blacksmiths, they fashion formidable weapons in the molten lava of their underground forges.

These great artists have a knowledge accumulated since the origin of their race. They gave the billionth to Zeus God who made use of it as we know. God subsequently ceded the billionth of his billionth to Google.

The ultimate avatars of this prodigious race live 50 meters below the Antarctic Islands. At the time of this story, the continent we call Antarctica was ice-free. It consisted of two distinct islands. Wild geese flew over the Erebus volcano and large woolly-haired oxen grazed in the tall yellow grass.

Rama was very fond of the unusual spectacle of these bovines. A recent creation of a Cyclops keen on applied genetics, these curious bison had ram-like spiral horns, and Ram was certainly the inspiration. At least he believed it. Whatever the level reached by the sage, however divine, a return of ego is never to be excluded …

The Sons of the Cyclops are the guardians of one of the main entrances to Inner Earth and the direct route to the stargate called the Crystal Center. The entrance to the internal world looks like a carved stone arch such as one can see in Macao, Bombay, Mexico City or on the great Parisian boulevards. Its size, on the other hand, has nothing to do with it. Designed by the First Humanity and for its privileged use, this stone arch measures no less than 77 meters. This height allowed the passage of a Master Cyclops of 54 meters perched on his faithful Tyrannosaurus.

The arch doesn’t show anything on the other side. It seems to be sitting on the edge of a rocky plateau, and what you can see under the arch looks exactly like what you see on this side. It is by crossing it that we realize our mistake. The laws of optics are strongly disturbed by this kind of energy, so much so that our unfortunate brain is forced to immediately manufacture a decoy that looks like something else, well known, not disturbing.

Such is the law of the dressing of perceptions. Under which one can not really be sure of anything. As long as we are not awake, this grid applies to all of our gross perceptions. Yes Meister Descartes, our senses do not deceive us, but our brain is working on it. 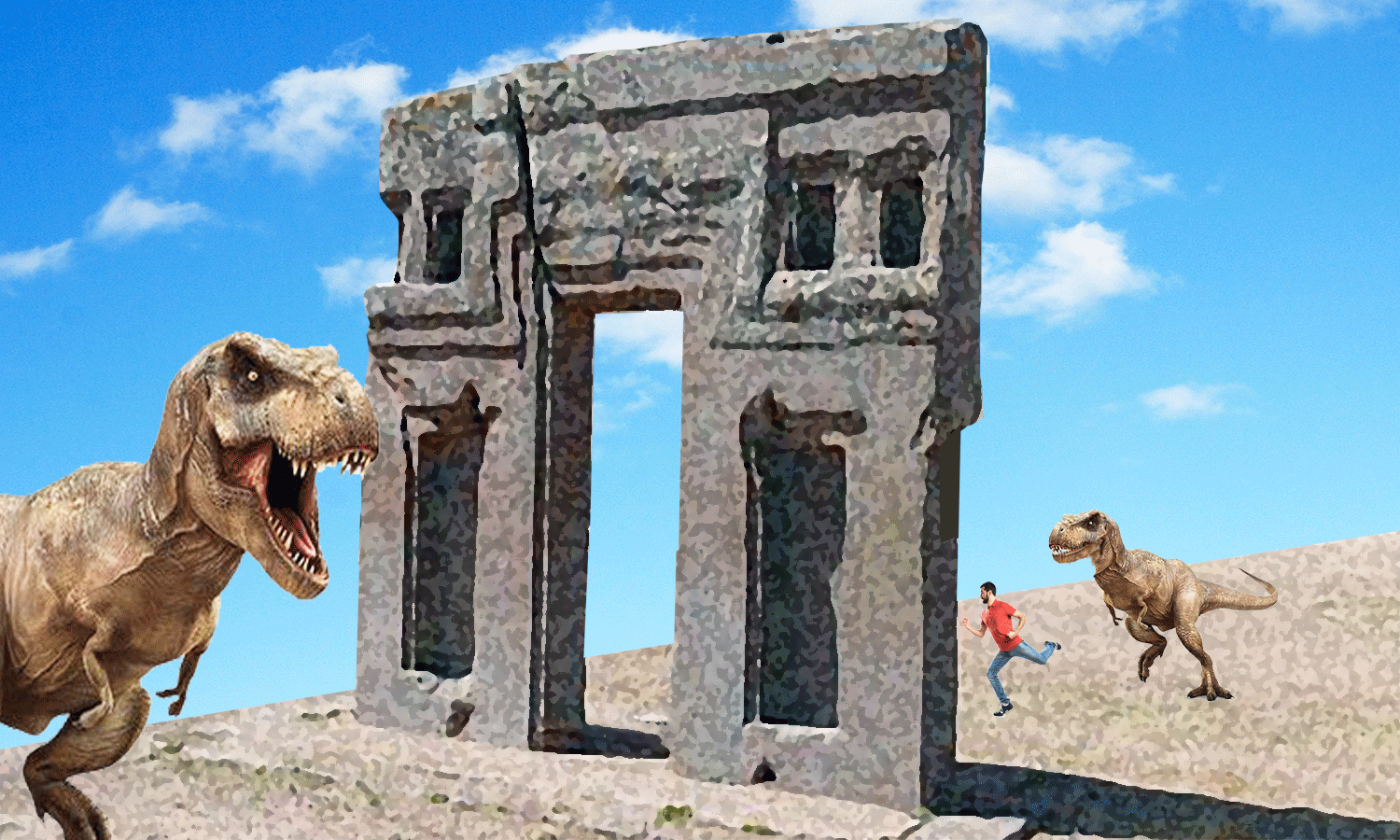