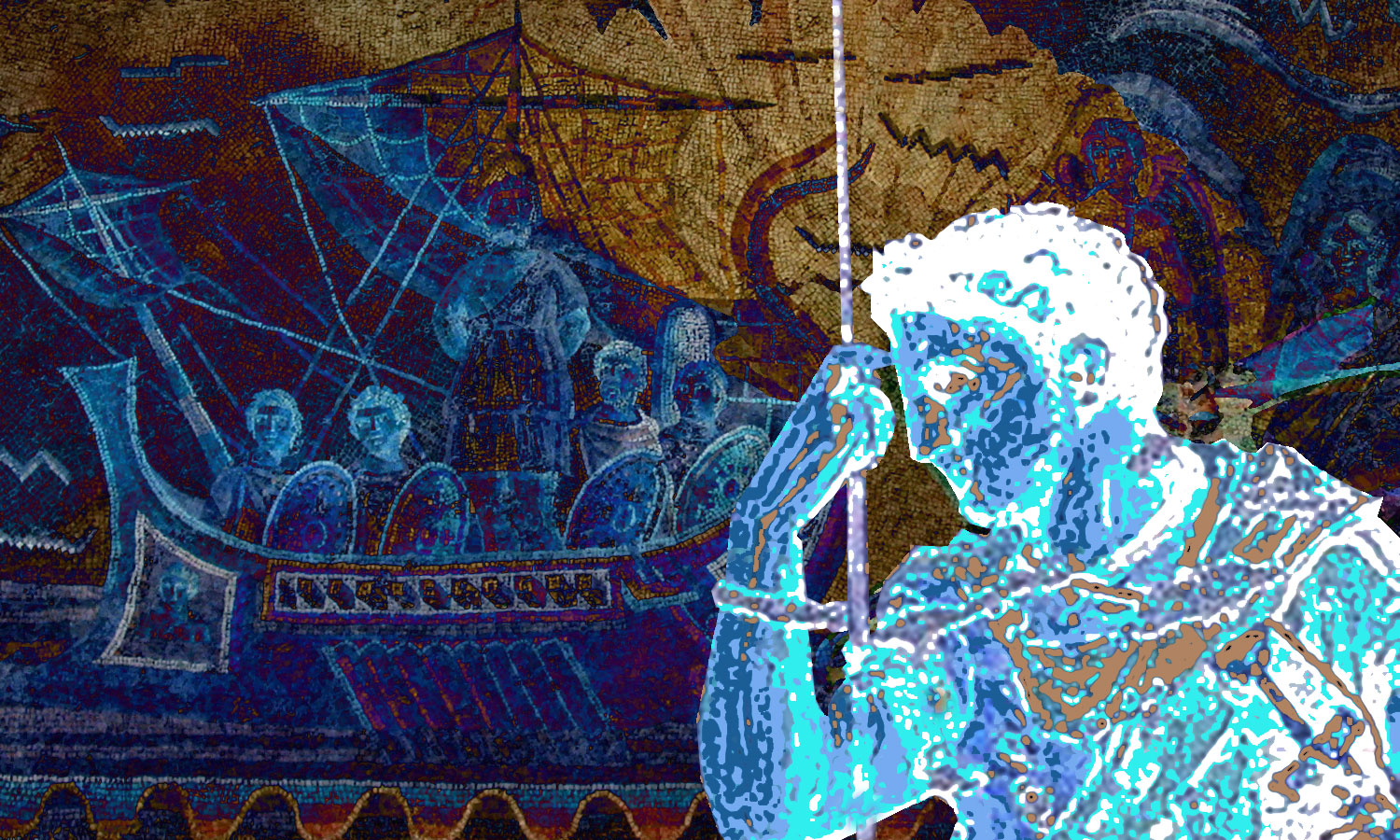 Aeneas distinguished itself in Asia Minor, on the coast of present-day Turkey, to defend Troy against the Greeks. He belongs to the race of these giant bastards, half divine, half human. Ancient Greece calls them Heroes. For India, they are the Devas. In the Bible, the Patriarchs. Gods they are not, but more divine than us. They surpass us with size, knowledge, strength and life expectancy.

Some biblical patriarchs are over a thousand years old — a good result compared to the 2000 years of life of the former gods. Note that 2,000 years is not the longevity record for them. Yahweh, for example, has managed to double that age. And he still lives! Too bad for us.

The former gods surpass us in almost every field. How could it be otherwise? They have cast us in their mould. They traced us. We are photocopies. Divine holograms. But less so.

Like the Greek Heroes, the Patriarchs of the Bible hold both the Earth and Heaven. They inherit — they inheredit! – humans as well as gods. It was under their impetus that the switch from matriarchy to patriarchy occurred. Capital reversal of societal values, stammers the amphi.-theatre of course, theatre! The transition from a women’s dictatorship to a male dictatorship was the founding event of our present societies, all more or less marked by the violence of a machismo of divine right.

To the four mythological eras of humanity — the Golden Age, the Silver Age, the Bronze Age, the Iron Age — Hesiod adds another age just for them, the Age of Heroes. As the Bible says so well, at that time the gods walked among men. The gods I don’t know, they have always preferred the comfort of Hyperborea to the vagaries of Terra. Those who lived here below were their children the Giants, fallen Angels, Heroes, Devas, Superhumans, whatever they are called.

Gilgamesh for example –who calls himself the first king of men– understands that the relay has just taken place. The gods have distanced themselves, no doubt called to order by higher authorities. They have returned to Alcor, their star system. Or they went to the strawberries on another of their conquest, another terraformed planet by their care. Gilgamesh anticipates that the male power will take over from that of the Women…

The goddesses ruled Terra with an iron fist for a hundred millennia. Their eternal reign was not meant to end. Only his excesses precipitated his fall. And the worst of all: the horrors of the Erynies, who are also called Amazons. The unceasing ravages wrought upon men by these persecuting deities. The wild abuses of the Amazons, shock troops of the Female Order. 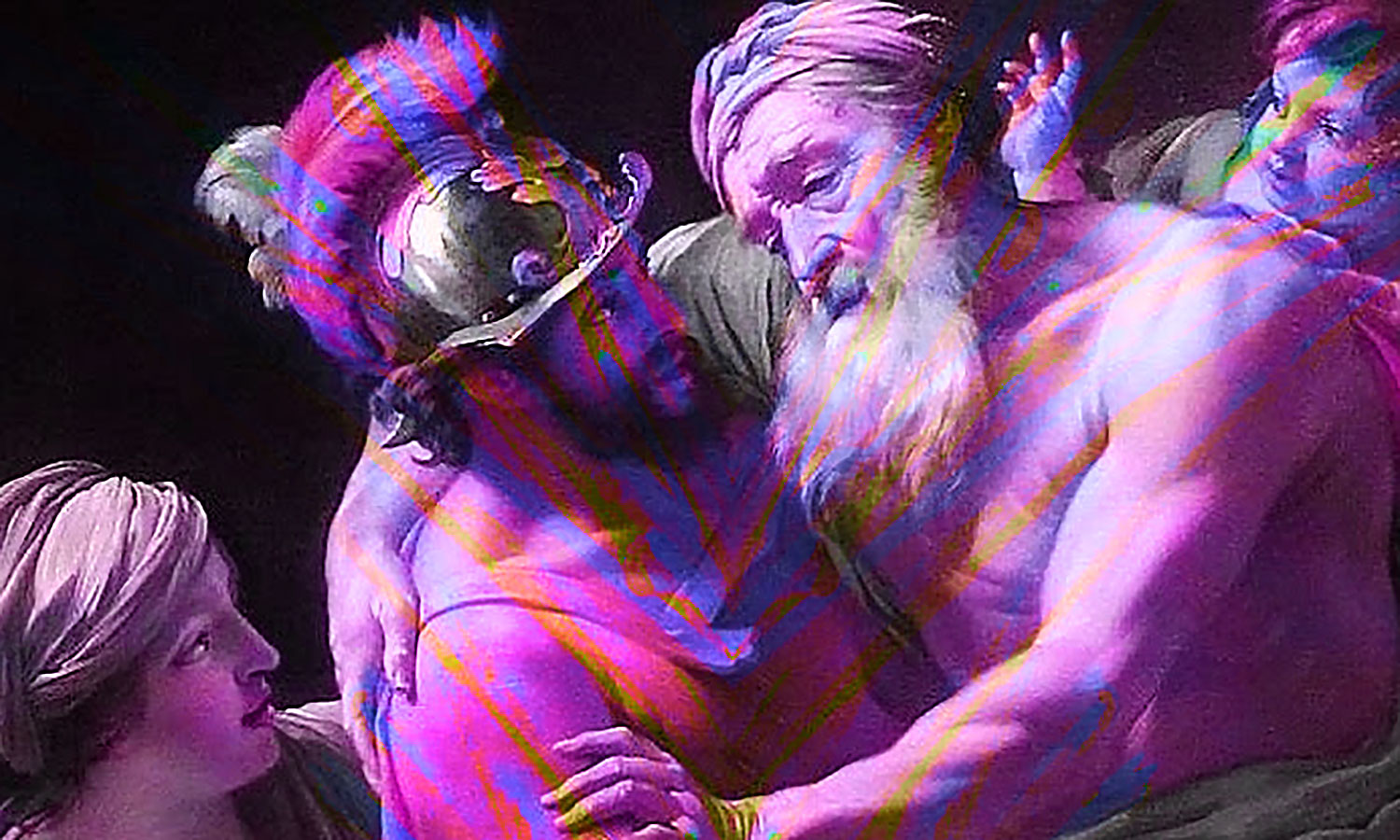 For some reason I haven’t figured out yet, after an endless heavenly reign, it seems that women have lost their marbles. Their benevolent wisdom, which had served them so well, turned sour, then vitriolic. They prey on the other sex and assimilate it to the plague. The Druidesses, ancient prefigurations of medieval witches, fought against all that was male. The strong sex was weak at the time. It broke down badly.

A long and deep terror forced the males to hide, to flee, to fight fearfully for an uncertain survival in the face of monstrous giants with hands full of fingers. This abyssal terror is engraved in the unconscious of the male. It sleeps in the man with his balls. He fears for them. He chose. Even if he oppresses the innocent, he will henceforth show himself ruthless towards the females who want to rise in society. It is reserved for the males point final. Never again the power to the females, however insignificant it may be! They would end up doing more abuse and atrocities.

The males have been carrying this arrow in the heart and elsewhere since the dawn of new times. And this arrow is a permanent pain that repeats: the woman must be submitted to the man. Submissive. Put under. Subjugated. Bullied. Head underwater. Home, shopping, cooking, cleaning, kids, all the work.

Thus Queen Hatchepsut is obliged to disguise herself as a man to be able to access the dignity of pharaoh. A thousand other examples of this dominant male sexism can be found from antiquity… and up to our days as everyone knows. And as everyone deplores.

But this repressive patriarchy did not directly succeed the violent matriarchy. There was the reign of the conciliator. An interlude of several millennia that could have really changed the face of things and that of humanity today. While the males hid to avoid the worst, the future of the species was at its darkest. Was a society without men possible?

There came Prince Charming, the one who reconciled the two sexes. By dint of cajoling, chivalry and romanticism, this best of princes sketched the foundations of an egalitarian society, where both sexes, in a complementary harmony, found to express the best of themselves for the greater benefit of all. You recognized this prince, it’s Ram, it’s Rama. 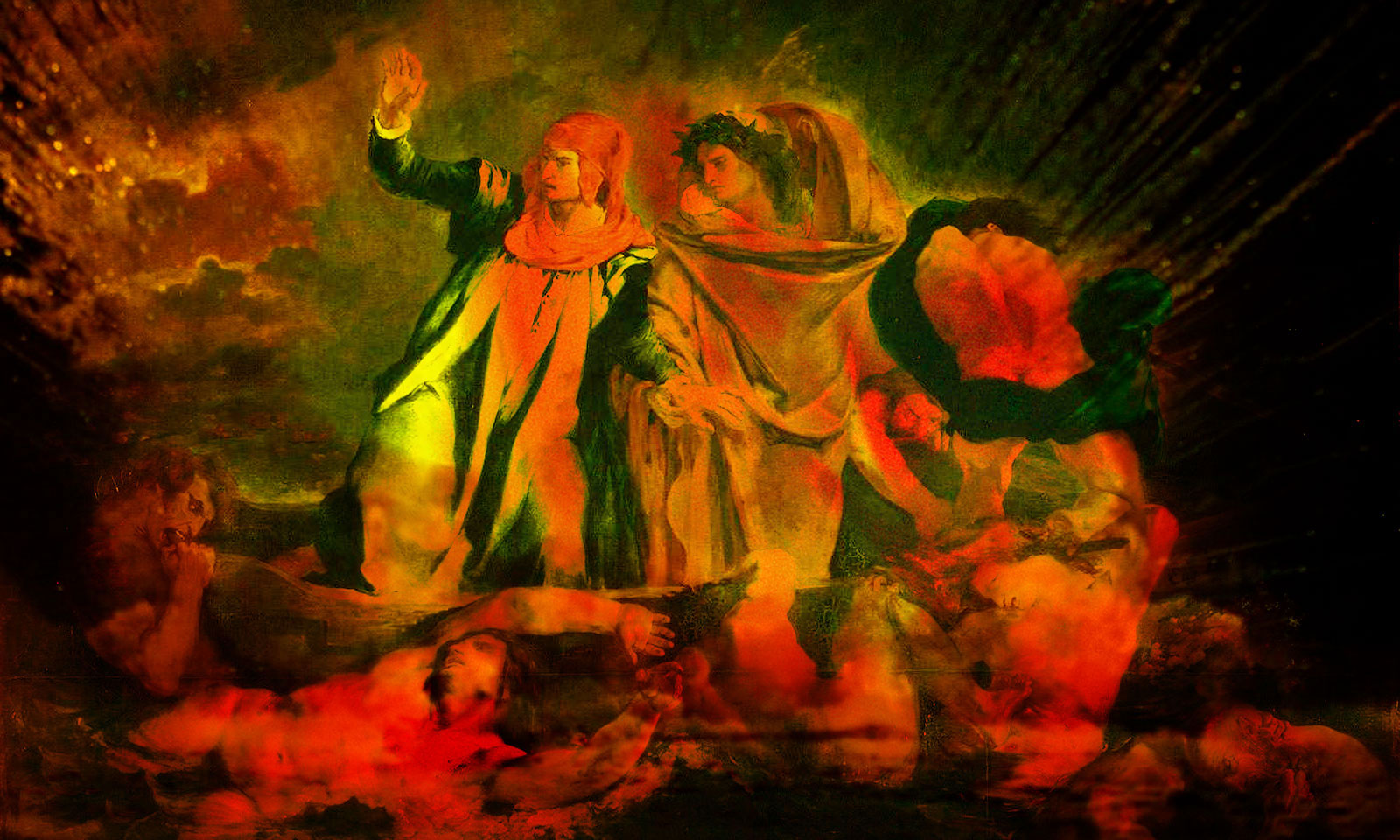 Thanks to him and his authority over the whole world, everything could have evolved in a very different way. Paradise on Terra escaped us by a narrow margin. Was it probably too early five thousand years ago? The character of Aeneas offers more than one resemblance with Ulysses, so with Rama. Troy hero, Aeneas is a miracle. While the city is totally destroyed and the Trojans have gone through the sword, the Greeks decide to spare Aeneas… because it is just!

This seems a very light motive in the face of the hatred that animates the Greek army… But that’s how it is. Aeneas thus barely gets away. He will then accomplish feats worthy of the Hero he is. He goes down to the underworld to bring out his father Anchise.

Two Italians have sung the feat of a human descending into hell. Virgil, in the 1st century before the common era, sings Énée who goes down to see her father; and Dante, in the 13th century, sings Orphée who wants to draw his beloved Eurydice from the Underworld. What hell are we talking about, if the dead are resurrected there? This evokes the Hollow Earth and the epic of the Earth Center.

Like his alter ego Rama of Hyperborea, Énée will cross the seas with his crew. He will experience adventures and wanderings that are a little too reminiscent of the Odyssey. The true hero of the Odyssey is not Ulysses but Rama himself. So I have some reason to believe that it is, if not a single historical figure, at least an avatar. Aeneas is the Trojan version of Ulysses, which is itself a caricature of the great Rama.

The Trojan War is closely linked to Rama. I think that the fate of the Mediterranean was played out during this war, won not by the Greeks, but by the army of Rama, those powerful warriors called the Peoples of the Sea. I showed how the Trojan Horse is a comic and derisory version of the dreaded ram, Rama’s invention capable of smashing the heaviest portal.

I showed how Homer the Aede — ie cabaret comic — wrote a cover on a taboo subject: the fearsome invasion of the Peoples of the Sea under the leadership of Rama. The Iliad and the Odyssey that Homer the Aede recited in the pubs are a shameless pastiche of the true adventures of Rama the conqueror, a frightening general who became the ruler of this planet.

Greek populations were still traumatized by the epic of Rama, its ravages, its power. In echo, the wise Heraclitis does not hide what he thinks of Homer the Clown.Speaking of clown, I know another one…

Now if we find several heroes to venture out on the seas like Ulysses or Aeneas, I bet these beautiful stories have a common source, that of Rama the conqueror, Rama from here, elsewhere and everywhere. To him the genuine original version of the Odyssey. Perhaps one day we will find a western version of the Ramayana? If the original version has escaped us, we must believe that the scribbler angels of Marshal Yahweh have done a good job. Hide, you ugly Ram! cries the Marshal. And from the core of a Belgian comic,The Mystery of the Great Pyramid by E.P. Jacobs Sheikh Abdel Razek replied in a brilliant wink: “May thy name be no more!“ 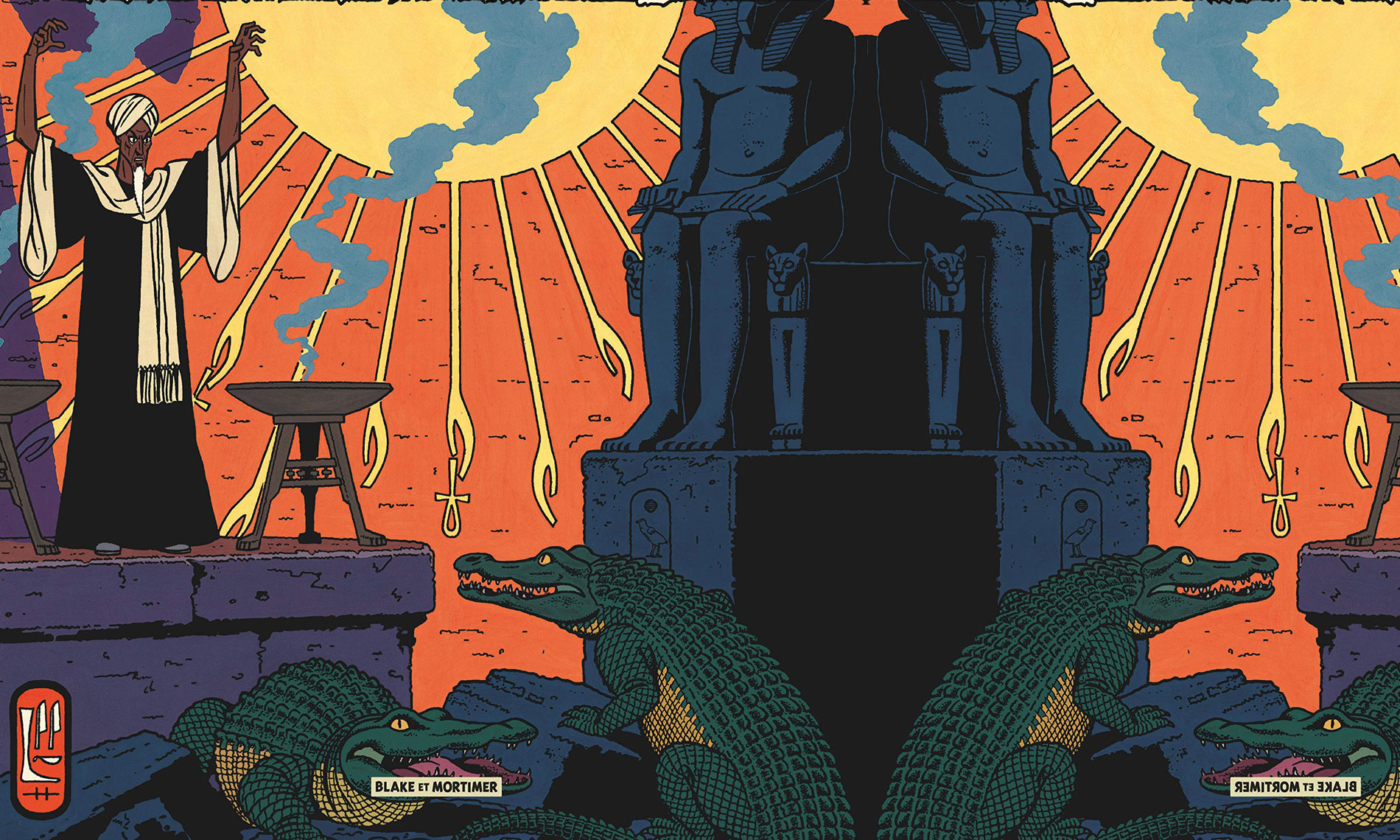 To go further : The Descent into Hell — The Odyssey of Rama — Ramayana and Odyssey — The Pharaoh of Exodus — Female King Hatchepsut —