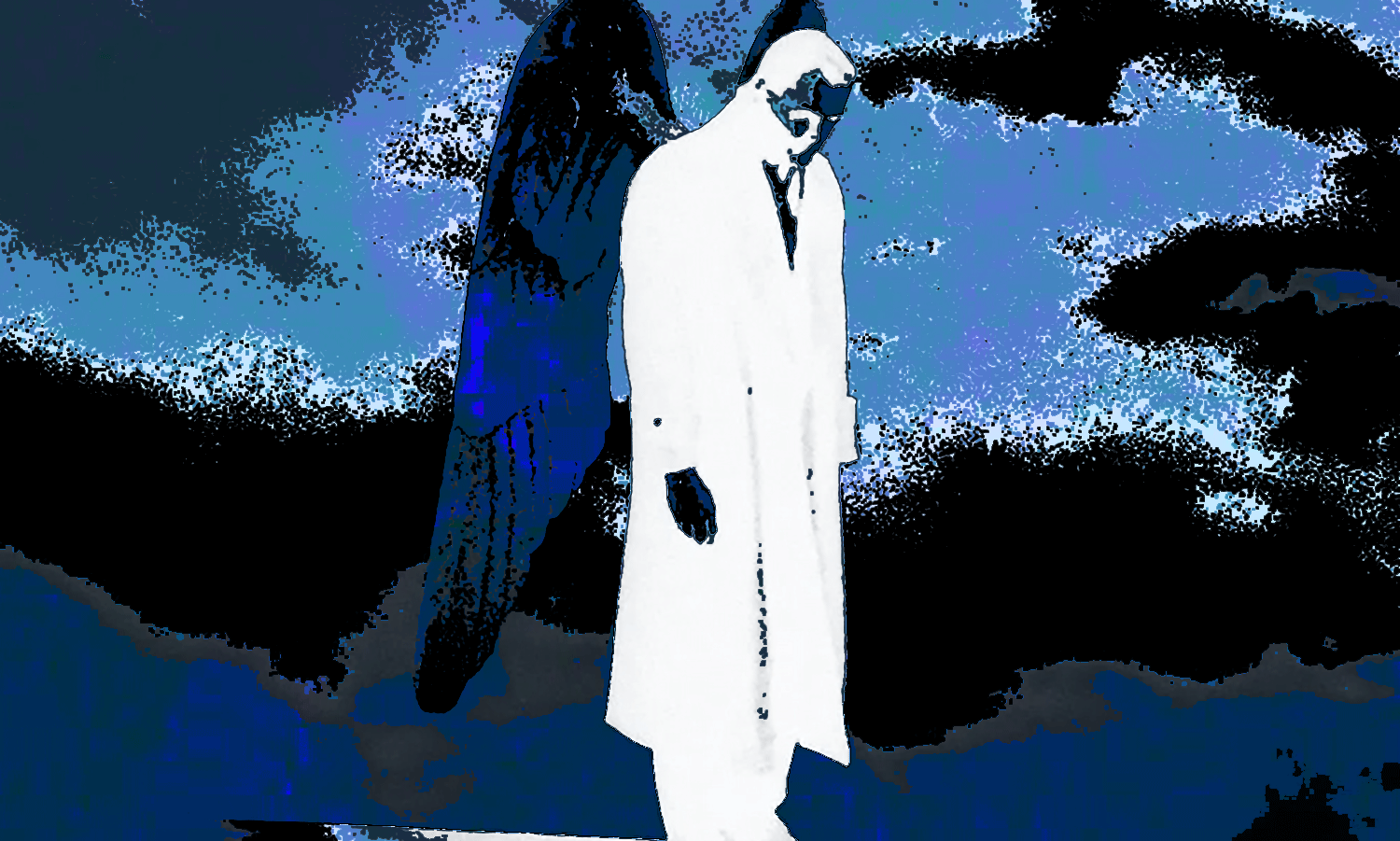 They were gigantic. They could fly without wings. On their wandering planet, they were looking to asses like the big disgusting they were. They had a voracious desire and the manners of raptors. Salacious obsessives. Braving all taboos, they found our females to their liking. Their desire was so strong that more than one cat meowed.

Them angels? Bullshit. They look more like fucking bastards. They made more than one young lady come to death, stripped more than one beautiful, stuffed more than one hen, teased more than one pussycat. Descended here below to use and abuse them, by the dozen they impregnated them. When a high-ranking officer shouted, they flew away, ears ringing, balls dangling, ashamed, pitiful, farting. There is something. Such a union is banned by Galactic Rules. As soon as the bastards arrived, the punishment fell. Hell took hold on earth.

Humans have spawned destructive monsters. Their offspring sowed terror. Some texts say that these hybrid giants reached the incredible height of 150m !! I do not know if we can give credence to this allegation. What I do know is that a gigantic human tibia was discovered towards the end of the 19th century in Britain. The size of its owner would have exceeded 20m, which is already not bad.

Still, the bastards were tall and strong in proportion. I have mentioned their bad manners in several articles such as Nefilim and Angels of Love. They behaved so badly that their hi-tech bosses had to get rid of them. Hence the violent flush of the Flood that they voluntarily activated to clean up these excrements. Sad affair.

Certainly no one is required to give faith to it. I have serious doubts. Then ? Deny this whole story as fictitious? A detail prevents me, which is important. This legend is common to Jews, Christians and Muslims. It appears in the three holy books. It sucks unhealthy. Should this be seen as proof of veracity? No doubt, especially since the same legend, adorned with the same myths, is found in China in legendary tales, in India in the sacred Hindu corpus, in Japan in the most ancient traditions, as well as in Indonesia, in the Pacific, in Africa, in Latin America …

There is no smoke without fire. I see in this episode the confirmation of many hypotheses. The gods before are human, too human. Both in their behavior and in their genetics. To reproduce with humans, they are not satisfied with a solemn apparition and a prophetic blessing, like the angel Gabriel to Mary. To impregnate women, they had to penetrate them. And nature took its course. 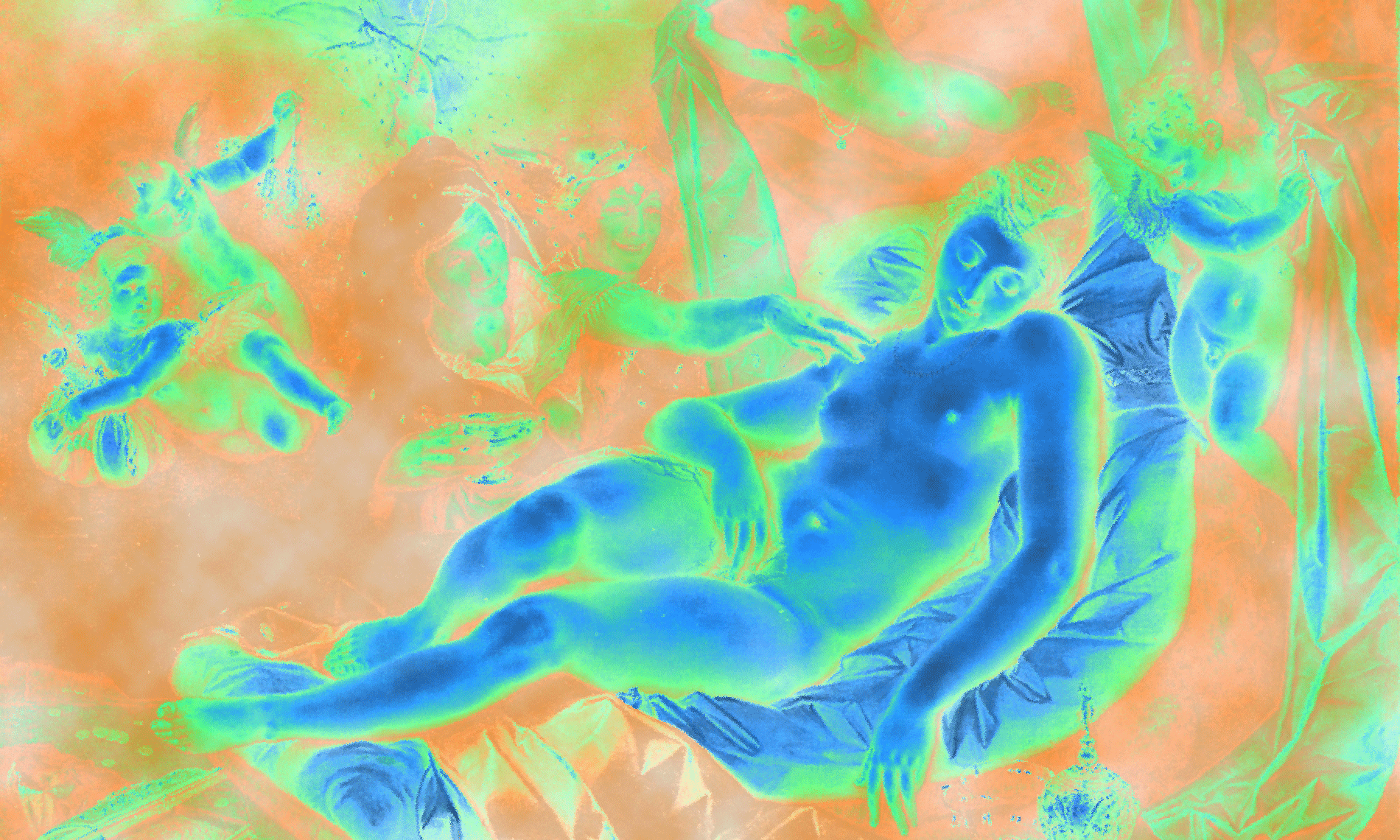 And on this chapter, they put their hearts to work, the fallen angels! I tell you. I have read it in a hundred texts, and I have verified it during my temporal walks. The Nefilim did not measure 150m, but ten times less: between 16m and 12m. Which is already frightening when the beast is hostile. They all were.

Disgusting in appearance, because of their reptilian character, they smelled strong. Though chemical, their spicy aroma was heartwarming. The former gods were pretty gross by our criteria as mammals. The goddesses had scales and like all reptiles they were oviparous, but most of the time they did not lay eggs. Reproduction was ensured in the laboratory by cloning in the laying matrix. Sex was all fun for them.

The gods would kiss them willingly, but they would rather impregnate humans or nymphs. With them, no genetic disadvantage, quite the contrary. The offspring had a human appearance – except the 4m height like their divine dads. He inherited some fatherly gifts and magical weapons, such as thunderbolt, vajra, aegis, crown, thyrsus, Lug’s howling sword, Arthur’s Excalibur, Orpheus’s lyre, the cruiser of the Argonauts and many other technological objects that are presented to us as magical.

Vietnam and Gulf War veterans are well aware of this devastating syndrome: boredom. Between two missions where the adrenaline flows freely, humanitarian operation or act of war, mortal boredom creeps in everywhere like heat, mosquitoes, running water and homesickness.

Supermen as they are, terraformers are no exception. The more the mission progresses, the more the years pass, and the more they are done. We could thus see the greatest, the chosen ones – Prometheus, Osiris, Achilles and the tortoise, magi, diviners, scientists, engineers, ingenuous, so many incarnations of the noblest virtues – act as perfect assholes. They no longer know what to do to overcome their boredom. They cheat on husbands.

Their distractions are ours: ass parties, video games or real brawls with drones and cannon fodder – human troops, don’t mess around with divine life, they created us for that. We exist only for their good pleasure. But who tells us it’s bad for us? They reward us with floods of adrenaline, various and varied endorphins, such as the anandamin secreted by the epiphysis, whose composition is reminiscent of the active principle of hemp, tetrahydrocannabinol or THC.

Supermen aren’t here for fun. A terraforming mission is not a picnic. They got bored in hostile territory like all occupying armies. They shoot anything that moves or they distribute food and blankets, even technological gadgets that our forehead ancestors take for magical talismans.

Everything the supermen have taught us has turned into ritual and magic. Very little of their science and technology has been collected by a few ancient countries, Egypt, Sumer, China, Mesoamerica … With the test of long time, the background fades, only the form resists. And no one knows what it means anymore. 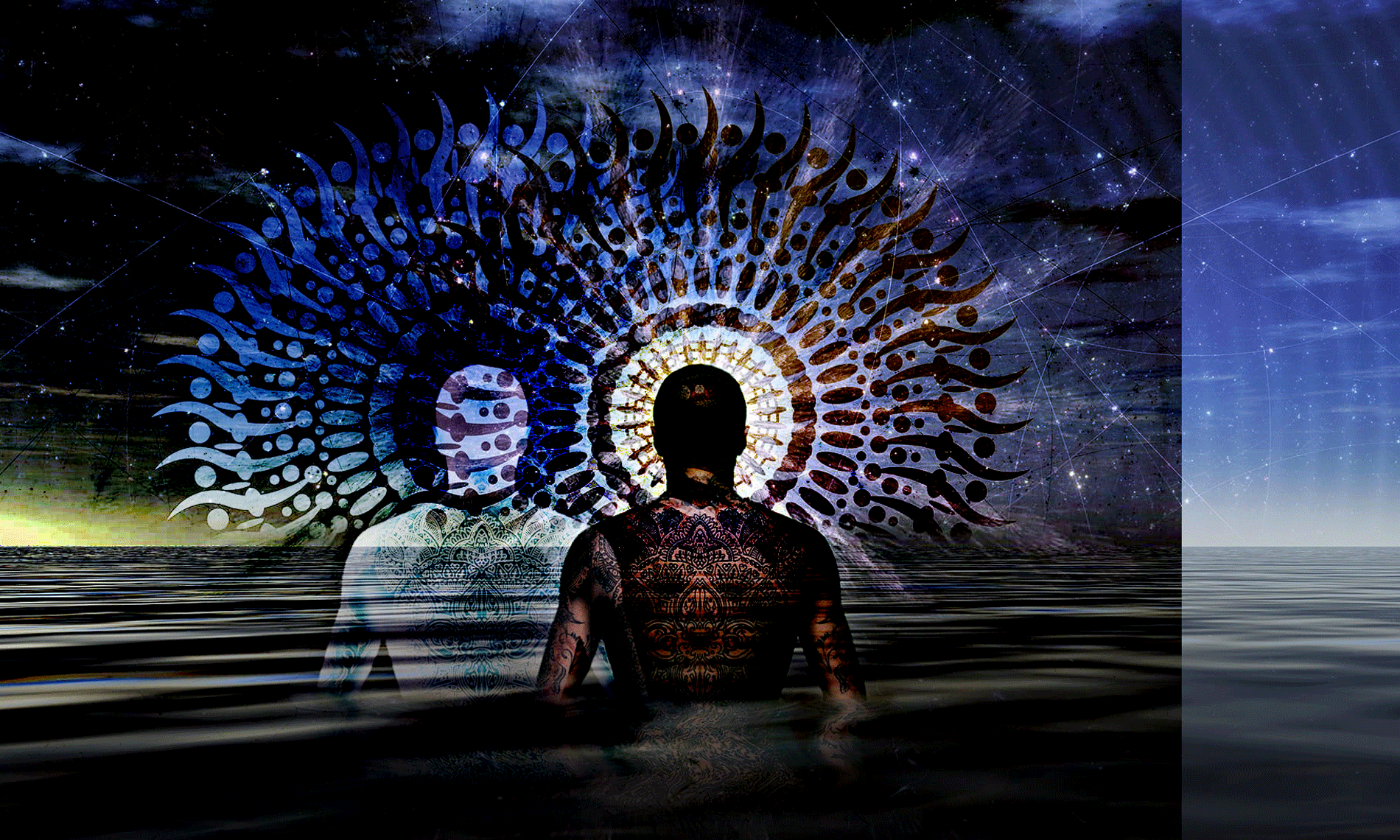 Like us, angels, giants or former gods need adrenaline. Desire leads them, the quest for intensity is their daily bread. Thanks to their science, they enjoy such a long life that boredom is their worst enemy. That is why they are unbearable. They are not accountable to anyone as long as their mission is going according to plan. Human lives do not count, justice is cookie-cutter. No trial on the front lines. No lawyer when the war is raging.

They want our women, our goods, our blood, our children, our lives. We are their flock, human cattle that are led to the slaughterhouse by the four paths that crucify the world, all around, all around. For the poor slaves that we were, it was necessary to escape the roundups, the punishments deserved or not, the human sacrifices, the circus games, the murderous madness of the bored gods …

The gods have too much life, we don’t have enough. We row, we work, we sow, we rhyme. We spit, we do, we get angry, they don’t care. We burn, we make up, we love, we mime. Life is not a due, but a gift. Say thank you. They can take it back from you at their convenience.

The former gods are often the plaything of their desire. Which shows that we only had to deal with underlings. Rusters. Worse, lawless pirates, renegades on the fringes of the galactic system of planned terraformation. Our masters take over the left behind, the scraps. They set their sights on the Earth two or three thousand millennia ago, since then they have worked hard on it, and our ancestors have helped them a lot.

Now it’s up to us to choose. Save this planet to continue their work, or drop everything like filthy pigs. To save ? it will be very hard. To drop ? it will hurt a lot. 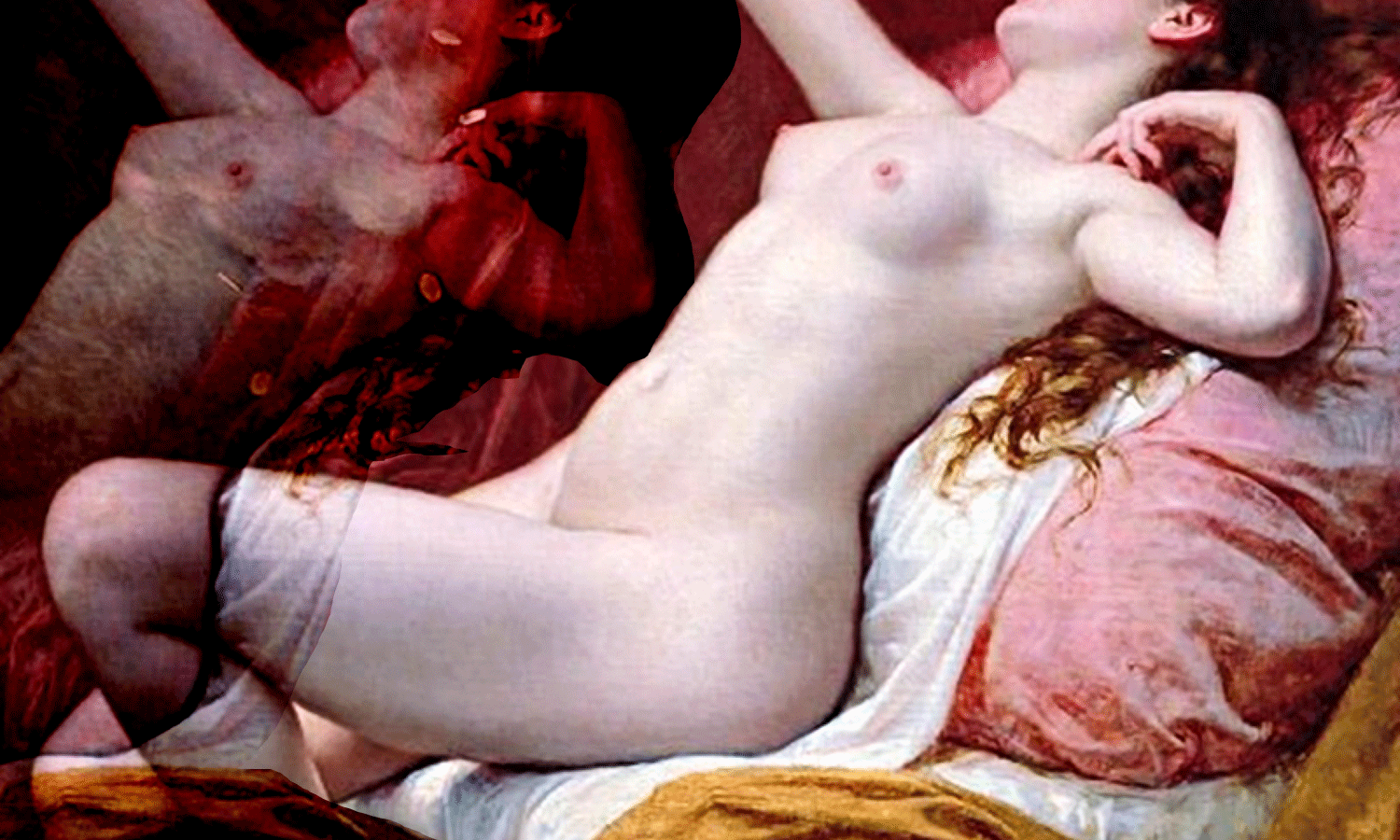 There are more things in heaven and earth than are dreamed of in our philosophy.