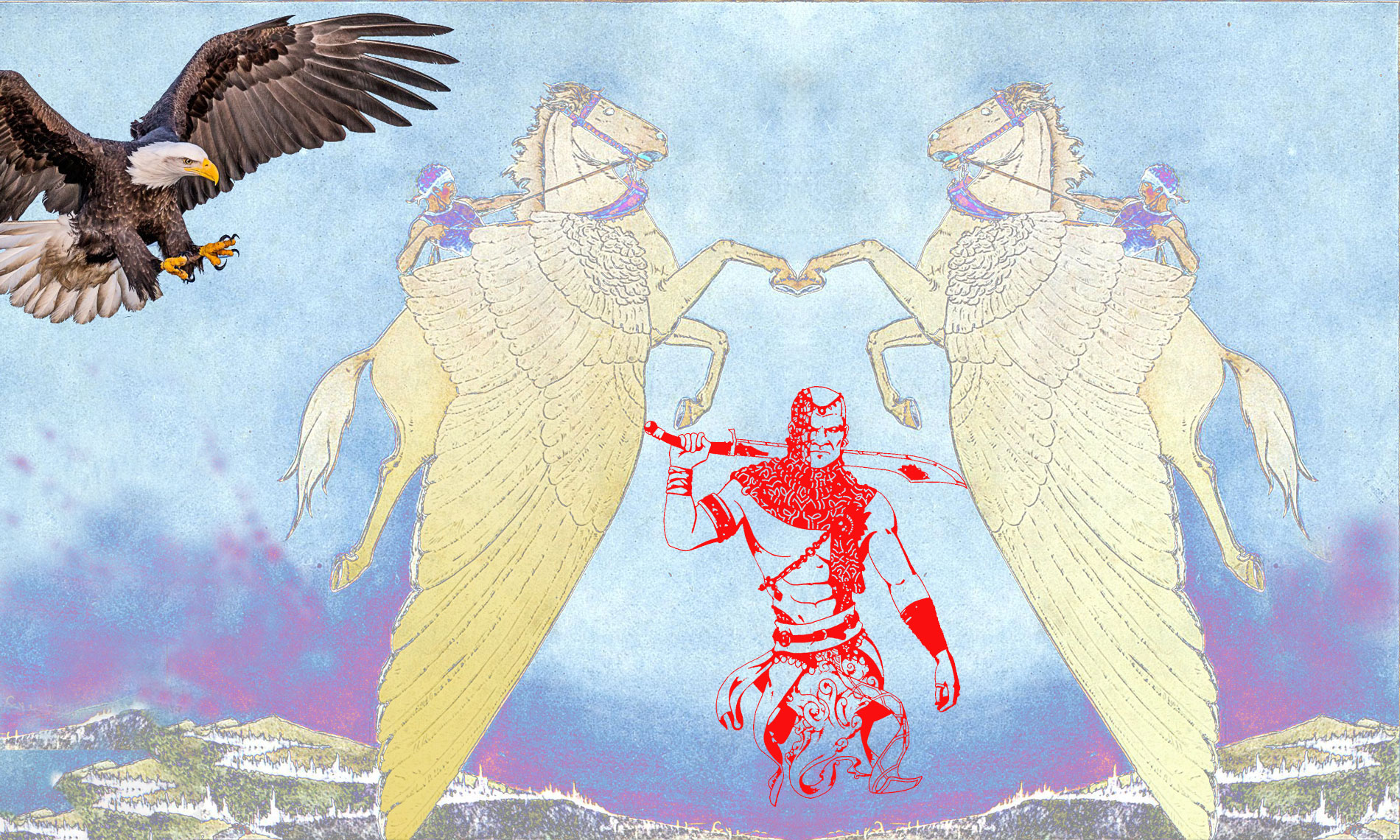 As a child, I was fond of tales and legends.I am both still! I particularly loved fantastic creatures that haunted my dreams, first those of Persian mythology and happy Arabia: the omnipotent jinn coming out of the oil lamp, the terrible bird Rock of the Thousand and One Nights, the flying carpets who carry me through the air, the phoenix rising from the ashes, and the flying horse Buraq.

I had a lot of trouble for poor Bouraq. It is true that he is sorry! He does not look like anything with its woman’s head and peacock’s tail. But if you take the trouble to scrutinize it with the technological eye, it’s not so ridiculous anymore. When one undresses it, when one eliminates slags that ignorant people have added to its portrait, it passes from the childish imagination to that of science fiction. The secret of Buraq is incredible! Many children suspect it, which is why they are so attached to it. 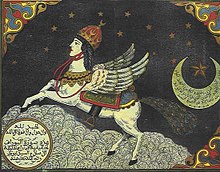 The Buraq or Burak (Arabic, البراق, al-burāq) is, according to Islamic tradition, a fantastic courier from paradise, whose function is to be the mount of the prophets. According to the most famous history, in the 7th century, the Bouraq was brought by the Archangel Gabriel to bring the prophet of Islam, Mohammed, from Mecca to Jerusalem, then from Jerusalem to heaven before making him travel back during the episode called Isrā’et ‘Mi’rāj (“night journey” and “ladder, ascension”, which is the title of one of the chapters of the Qur’an). The Buraq also carried Ibrahim (Abraham) when he visited his son Ismail (Ishmael) in Mecca. He is a subject of frequent iconography in Muslim art, where he is usually depicted with a woman’s head, a horse’s body, wings, and a peacock’s tail. (source)

The rising of the prophet

The Miracles of Al-Isrâ ‘and Al-Mi’râj: Many Muslims would spontaneously quote them if they were to be asked for an example of the miracles of the Prophet Mohammed – may the peace and blessings of God be upon him. This is all the more true since there is a surah of the Quran dedicated to it. It is the Surat intutilated Al-Isrâ ‘and whose first few verses refer to this miraculous event. The word isrâ ‘means “nocturnal journey” and mi’râj means “ascension”. (source) Night travel? Ascension? But tell me, would not this be what ufologists call abduction?

The night journey in question is the journey that Prophet Mohammed made between Mecca and Jerusalem in one night! And, ascension means his ascent from Jerusalem to heaven. All along this journey, the Prophet was accompanied by the Archangel Gabriel who was his guide and showed him many shows of Hell and Paradise. Gabriel had placed at the disposal of the Prophet a mount called al-bourâq (his name is of the same root as the lightning) which made gigantic leaps: she put her paws as far as the sight carried! Arrived at the highest of the heavens, the Prophet – peace and blessings of God be upon him – was able to converse with God, and it was on this occasion that God prescribes the daily prayers that Muslims make. At first fifty, then on the repeated advice of Moses – may the peace and blessings of God be upon him – the Prophet obtained a reduction to five daily prayers. (source)

Well yes, my friends, the Prophet Muhammed was abducted! He was taken into space by aliens in brilliant combinations, and in their chief he thought he recognized the Archangel Gabriel. At his side he visited the system of Alcor, in the Big Dipper, like Enoch, Hercules, Rama and Jesus had done before him. It seems that all the prophets are ascended masters. Have you ever wondered what this curious title means? Oh, it’s simple! An ascended master is an elected lucky man who receives the grace to be removed by aliens. The ascension of Jesus is an abduction. The assumption of the Virgin Mary, an abduction too. The exploits of Enoch, still abductions. Whenever a master disappears into the stratosphere at a supersonic speed, it is not a levitation, it is an abduction.

The wonderful journey of Muhammed who went to see other planets before traveling a great distance on earth in the space of one night, this is just space tourism that billionaires will soon be able to afford. Yes, it is so. Now Buraq is no longer the prophets’ privilege. Today the ascended people are no longer masters, but military astronauts or billionaire tourists. Sad season! 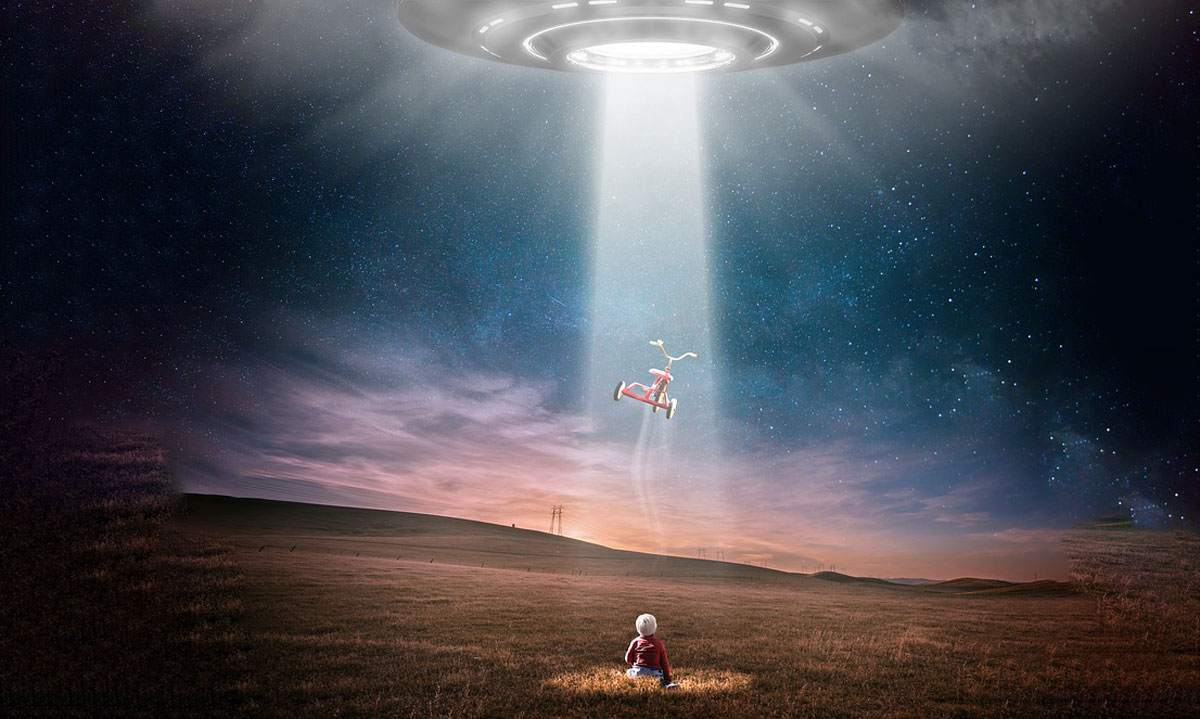 As for his magical mount, it recalls that of Odin the Terrifying, that of Adapa the Intrepid, that of Rama called the Golden Fleece, that of King Solomon, all those whose everywhere legends are going on and on. I also note the influence of an episode of Greek mythology, the swans of Apollo. A well known legend throughout the Mediterranean basin of the time. Alcaeum mentions the sacred swans which transported Apollo, after his birth, from Delos to the land of the Hyperboreans, and from there, at the end of a year, his arrival at Delphi. (source) Agreed! Muhammad took a trip to Hyperborea. The former gods, my friends, are still today gods. No swan has ever abducted Apollo to Hyperborea, a space shuttle did.

So Buraq was not a horse, it did not have a woman’s head or a peacock’s tail. Its reactor was adorned with a pretty colorful plume, which has been compared to a peacock’s tail. The music of its sonic engine must have been so sweet and pleasing that it was taken for the voice of a beautiful singer, hence the woman’s head. Since it is a rich mount, one could not imagine a donkey or a mule, hence the horse.

Yet there is another flying horse in ancient tales: you know Pegasus, the red horse of the Mobil logo. Proud and triumphant, this horse has wings. Elsewhere, the right horn of the unicorn might be added to it. All the myths communicate and mix but the angel watches and wakes us up in time. Yes, Pegasus, who are you? Please tell us.

“Pegasus (in ancient Greek Πήγασος / Pếgasos, in Latin Pegasus) is a divine winged horse, one of the most famous fantastic creatures of Greek mythology. From Greco-Roman poets, he ascends to heaven after his birth and puts himself at the service of Zeus, who charges him with bringing lightning and thunder on the Olympus. Captured by Bellerophon, Pegasus allows this Greek hero to mount it to defeat the Chimera, and realizes with his rider a lot of Other exploits Bellerophon falls victim to his pride and falls while trying to reach Mount Olympus on the back of the winged horse Pegasus finds Zeus, which ends up transforming it into a constellation and placing it in the sky.”  (source)

You do not have to be a great cleric to understand the true nature of this fantastic creature. Another flying craft, another single-seat space shuttle. Another vimana! Pegasus, however, did not pity me like Bouraq: it made me rather ashamed, because of its unsuitable name …French: Pégase can be read pet-gaz, meaning fart-gas

Mobil Pegasus must be ashamed too, since it blushes to red colour. I hear the stupid nursery rhyme in my head every time I see this logo : “Riding smart / making fart, making fart,”  sings that poor flying horse with gas.