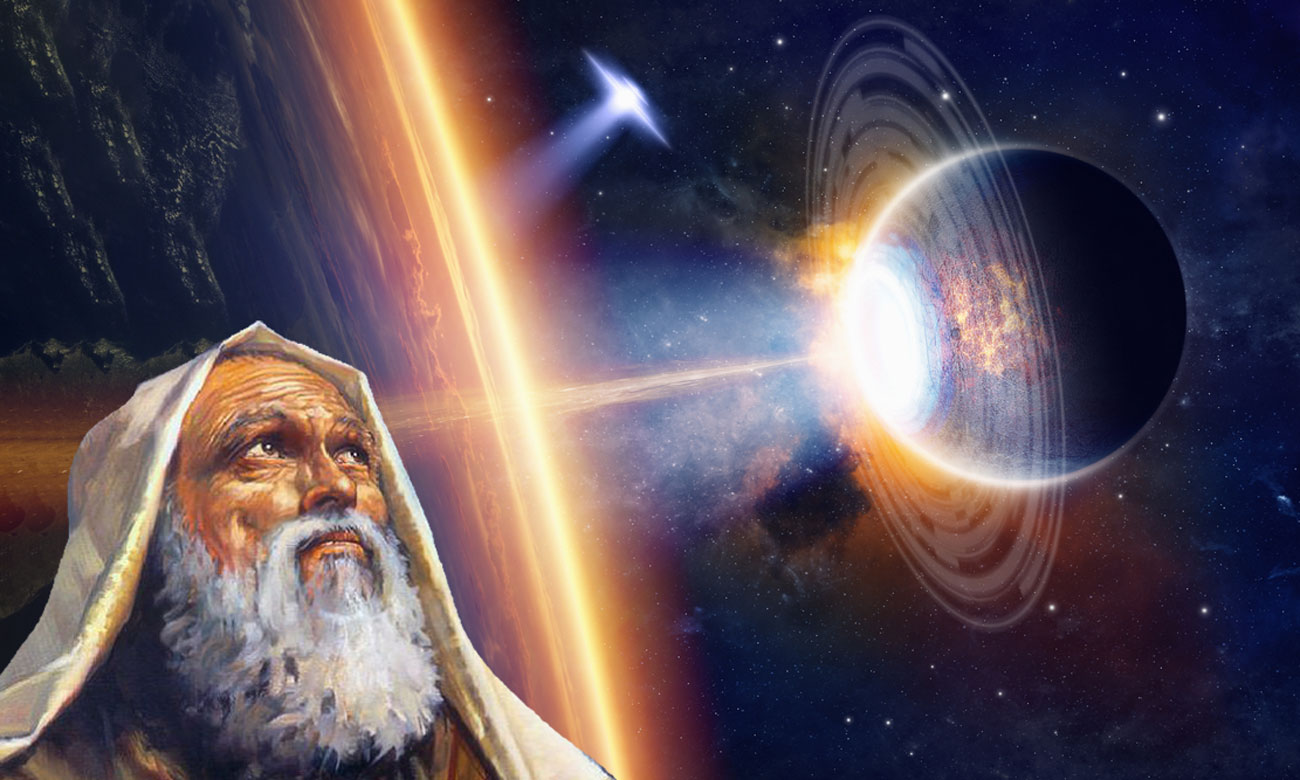 I, Aorn, son of Thyann aka Jared, have been living on the sun among the Mighty Masters, while my human brothers hid in tunnels to resist the ice cold that was reigning on earth. On the sun, for four centuries, the great luminaries gave me a good dose of their knowledge.

It was above the clouds, in the sumptuous palace of the Great Goddess, that I was introduced as soon as I arrived on the lands of the sun. She gave me the name Enoch. Then I was made to descend into a crystal bird, which lay down the egg that I was near a torrent at the foot of a superhuman mountain. I had not taken three steps until the transparent bird had vanished as if it had never existed. Alone, facing the enormous cliff that was lost in the clouds, I heard the roaring of a thunderstorm. An enormous voice rolled its roaring echoes that blend with the thunder. Thus the cyclops speak.

The Powerful Ones are masters of magic. They are masters of many things and worlds and creatures. They created heaven and earth, comets and all the stars, and all the kingdoms of the stars, and all the inhabitants of these infinite kingdoms. At least they said so. In 400 years I had time enough to realize that they exaggerated a little, if not a lot. Most of them, if not all. They can’t help but add, even if they truely hit the spot and ring the bell. They did make it all right. They tinkered a lot. They have arranged our planet, the Earth, which is just one world among myriads of unknown worlds. The Earth was young and wild, they began to fix it. They made animals and plants, they had brought all the seeds with them. They did the best they could. But they were not the ones who created the seeds.

After that, there was the great light war against other luminous warriors. Everything has stung in a great motionless light, and the black cold has come upon the world. The powerful masters have seen everything from above, on the Sun they live in, which is not a true sun, but rather a world that travels between the worlds. A world, or rather five worlds. Five very different continents separated by isthms. 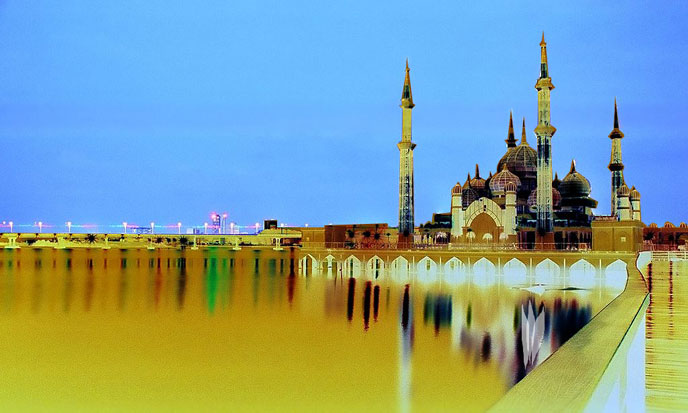 The flying crystal had dropped me in the Cyclops kingdom, but I knew nothing about it. Initiation must begin in this kingdom, for the cyclops are the first auxiliaries of the Powerful Ones. They were the first inhabitants of our planet when it was still wild, but I did not know anything about it. I was going to find myself face to face – or rather face to foot! – with a fellow twenty-five times taller than me, but no one had warned me. Note that if I had been told that this fellow would become my mentor on this mountainous island, I would never have believed it.

These great beanpoles are not unpleasant. They have a thousand useful things to teach the ignorant, and I was a jolly good one. The cyclops are mountain people, they build antennas on all the tops to catch lightning. Perched on the shoulder of my mentor, I could accompany him in all his climbing and hiking on the island of vertigo. In this strategic position, it was convenient for me to make myself heard, shouting in his vast ear. To answer, my dear 54-meter-high mentor roared his howling voice in a little whispered voice, and apart from the disadvantage of the spluttering that dipped me to the bones, the communication was going well.

He taught me algebra and geometry, the works of wood, of stone and metal, mechanics, general and specialized engineering, electricity, vril, and ten thousand other branches of knowledge,  which have filled me with ease and wisdom. He showed me how to work the different metals, how to design magic weapons for hunting or war. At the end of a century I had become a master in the art of melting and forging. The desire made me go and see the country, and I made an electric lance that propelled me to the neighboring island on the first attempt. I fell on the ruthless island, in the kingdom of high magic, in the land of the very powerful and disturbing witches. Their reputation among the Cyclops was hardly appetizing, but this island was the second initiation of the children of the Sun.

I walked on tiptoe when a lovely witch made all my clothes disappear, and without being able to sketch the slightest gesture, I found myself lying on her bed, while she was working to make fall her clothes. Which, to my delight, took her quite a long time. This first lesson augured well for my new stay. Yet I soon discovered how witches are working. With them, no respite, no weekend, only Mondays. On the relentless island, the witches taught me the laws of love, the magical use of pleasure and the healing enjoyment. They also taught me the inflexible will and the thousand faces of intention.

At the end of a century, by the grace of their precious care, I was master of the many practices of ordinary magic, of alchemy, of high magic, of sexual magic, of extraordinary magic and of Spagyrics. One morning, on my own, I made a crystal bridge over the first river, and I passed on to the next island. This time I knew where I was falling. But I had not the slightest idea what I was about to find out.

The island where I had just put down my foot was the kingdom of reptiles. All my 2-century experience, all my accumulated knowledge is useless now. These people are not like us. At home, it’s out of the question to learn as you please. They are known for their great intelligence and exponential memory. The program of studies is considerable there, I had to develop my 36 most sharpened senses, no question of wandering or balking, I was working too hard to dream. 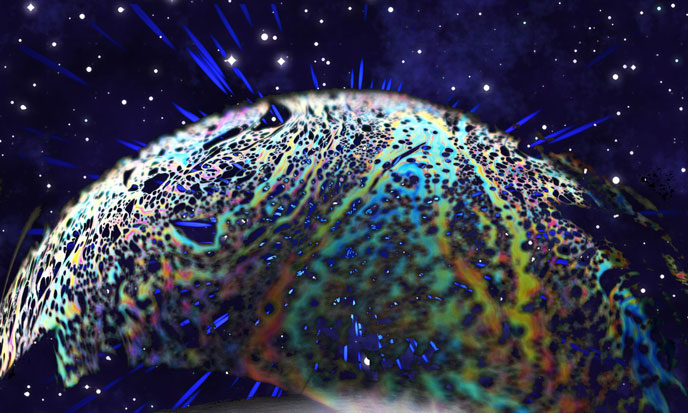 I found myself immersed in the distant past of the Earth. I have lived hundreds of lives, rubbed shoulders with thousands of people, fought millions of battles, all in one day, appalling, endless. I am broken in pieces. This first day of teaching reptilians was so dense that it seemed to last a lifetime!
“A life, no doubt, said Sanghor the reptilian. But a life of one hundred years. Where you thought you were living an intense day of discovery, you lived a hundred years among us, and you know all our secrets, big and small.
– What do you mean ? I’m afraid I do not understand, I replied, upset.
– Let’s say you’re afraid to understand. The hundred years are up. It’s time for you to leave this island and our company.”

From the last island, I would not say anything here. The times have not come. It took me many years, many centuries, to recover the total memory of the teachings received on the four islands of the Divine Sun and on the central island that dominates them all. Know that the divine Sun is not a natural star, it is the home of the Mighty. They have lived there for ages, and before them the Fathers of their fathers lived and taught the Sons of their sons. I recorded the enormous amount of this knowledge in a book that bears my name, Enoch. This book details all the sciences and techniques mastered by the Mighty. Their distant world is known to me, they took me there on board their fast ship. I have traced its customs and customs, history, geography, climates and the arts. This enormous work did not require less than 75 years, which may seem long, but only represents one tenth of my life as a man, praised be the Mighty for this prodigy and for all the others.

One day, your researchers will find other parts of this book that you have so far snatches. A short time later, the veil will be removed, which deprived your eyes of the light of the whole. Let it be.