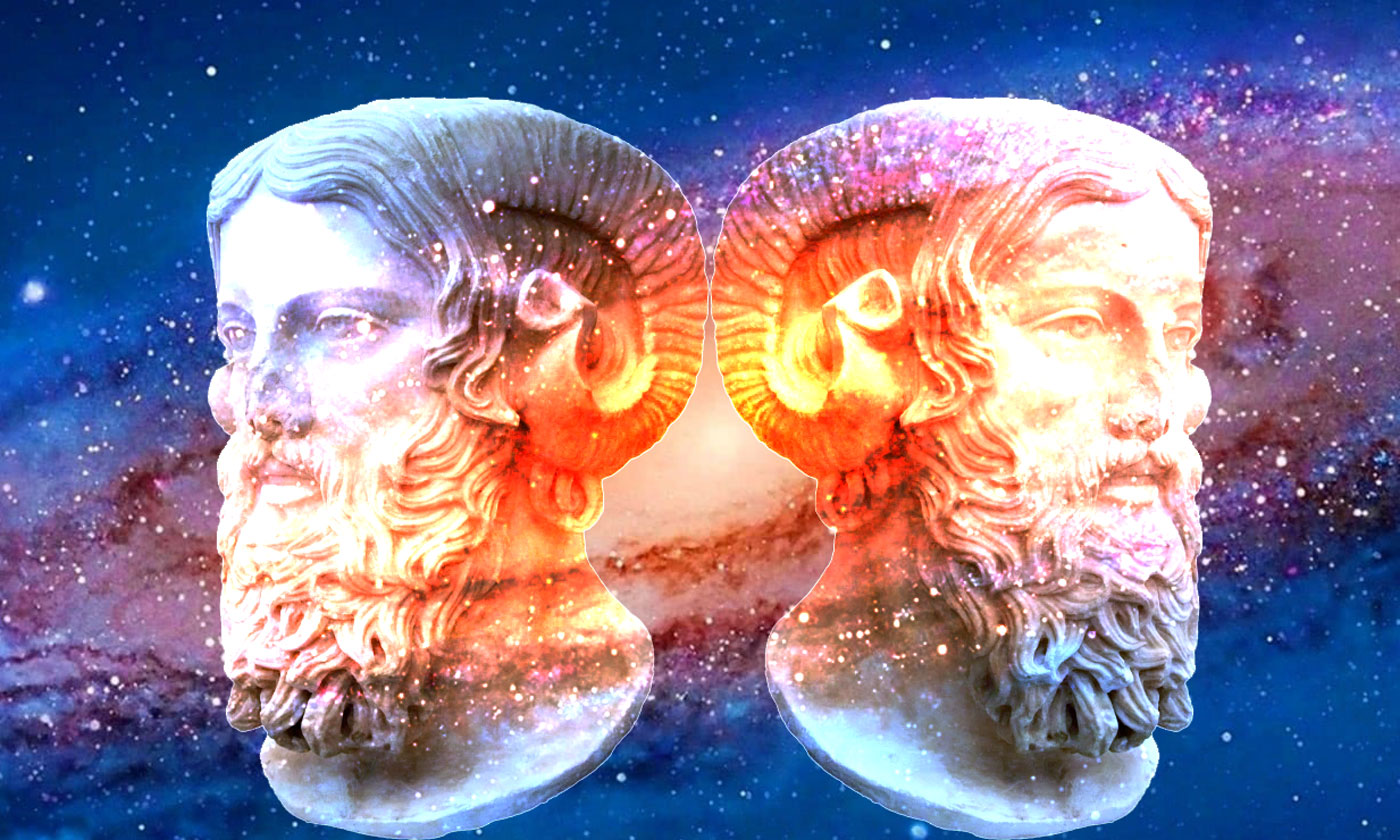 At that time, Rama Baal reigned over Terra. He spent more than 900 years conquering it as one conquers a woman: with love, with patience, with passion. He was first the master of the Celts and Vikings, black like him. With them he embarked on his Odyssey. For nine centuries he walked, conquered, negotiated, embellished his possessions. He coaxed hostile leaders and taught barbaric tribes until the whole world ate him in the hand.

The closeness between the divine persons of Baal and Rama is not something accepted by the great number. Only a few punks of my ilk strive against all odds to restore some semblance of order in the clutter of legends that have reached us. If I have undertaken the rereading of our history, it is first to gather what has been separated. At this price, we get a new version more likely and less indigestible

There is only one Baal on Terra, at least in this corner of the world. Baal is a Semitic word that means Lord, God. It is also a Gaulish term which means Aries. Image of the god Bel / Belenos –demonized in Belial. Aries was the nickname of the god Rama of Hyperborea. This flying island that the Sumerians call Nibiru, the wandering planet, was a mother ship the size of Venus. It housed a civilization of millions of gods. All bowed before the Baal — undisputed master of Hyperborea as of Terra — Baal Rama, in power for 900 years. Baal had entrusted the command of his legion of angels to the most qualified of his generals, Yahweh Zeus. Baderne had worked so well that Baal awarded him the prestigious title of Marshal of the Angels. Scrogneugneu! There is only one Marshal of the Angels on Terra, the beautiful planet. And that is Yahweh God.

We can say Yahweh Zeus or Yahweh God because the two words are synonymous. YHWH is therefore the rival of Baal — which is written with two a’s as the Grail. Who is he, this omnipresent god, forgotten though? Ra Ramos Rama Bel Baal Belenos, to give him some of his titles. This god did more good on Terra in 2000 years than Terra had in four billion years. How do I know? I went there.

Yes, all this is true, it’s very nice but here it is: Yahweh Zeus is a jealous god. He aspires higher than this post envied Marshal of Angels. He sees himself very well on the throne of Baal.

—He is old and weak, jolly good Rama. He can no longer stand in the air, says YHWH. You poke him in the back, he’s on a plane for three months. So he’s holding up? Well, I’m going to fuck him up. So the old bastard will end.

Rama has heard everything. He has long suspected that his faithful lieutenant is fooling around. But he doesn’t care. Rama Baal is insensitive to honors. He has never been as enamoured of power as the Marshal of the Angels. Bullshit! Baal is fed up with the halo. He would like to dream in the aura of Terra, visit his laughing future in the season of golden apples, play with his young mistress under the scented shade of the Hesperides garden, tell fleurette to this little wildling of the Andes in his summer residence of Tipon, make love to him gently, tenderly, on the fresh lawns of Brittany. But no. There are always plots, threats, ambitions, betrayals. What lowliness, what vileness! Rama regrets the blessed time when he kept the goats of Culann. 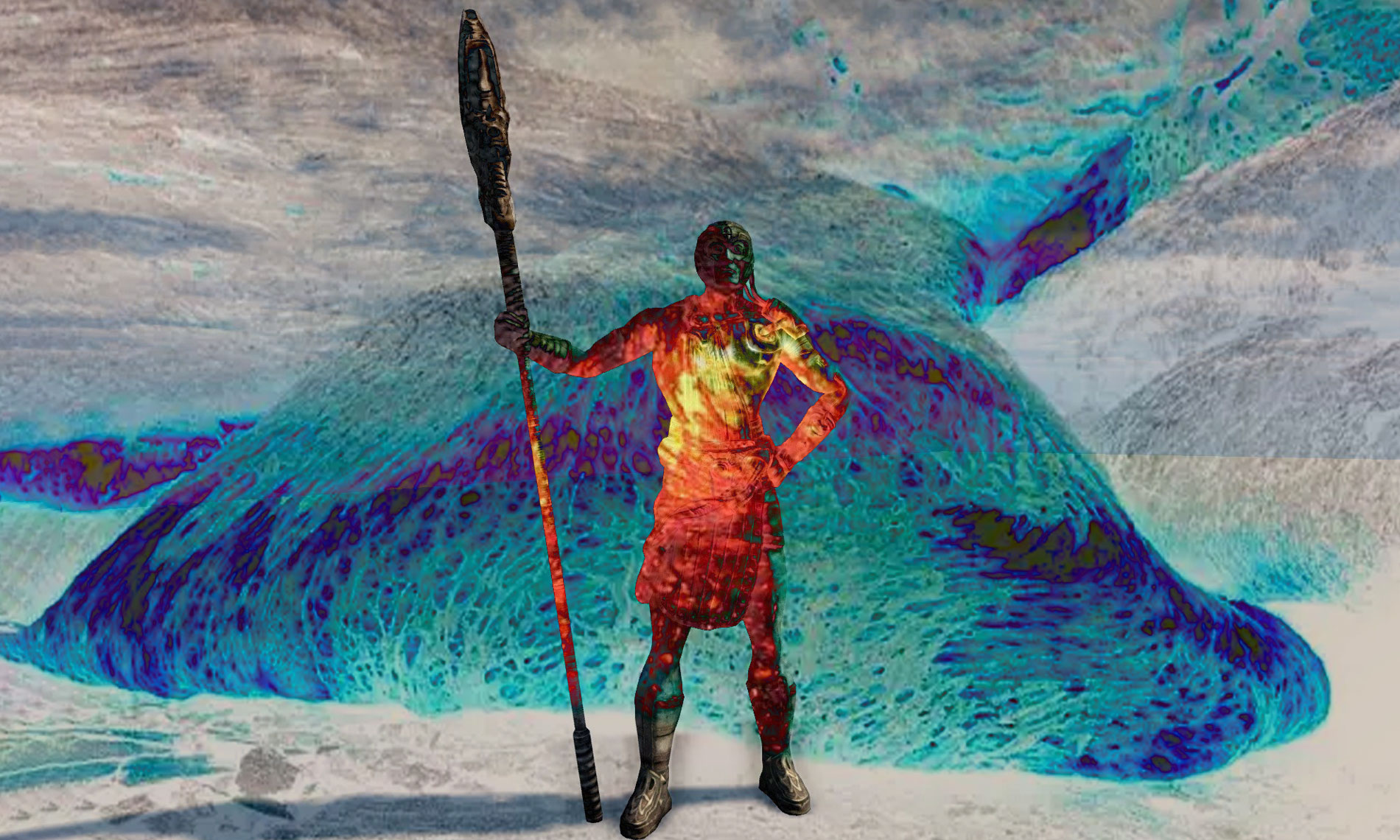 If Baal and Rama are one, let us bet that it is the same for Zeus and for Yahweh. If the unbelievers need proof, I venture this: what is Yahweh called today? God. And where does DieuGod come from? From the Greek theos, which means Zeus and DieuGod. So when the Bible writes Yahweh DieuGod, you must read Yahweh Zeus.

Evidence aside, these two look like brothers. Like two champions of scheming, they intervene in human destiny by listening only to their interest. We remember the tricks that Zeus uses to achieve his ends, usually for buttocks. Yahweh does not. But tricky question, it is worth Zeus. The Book of Judges tells us about Samson’s marriage and it is eloquent. Samson tells his father that he wants to marry a Philistine. The parents pull the face. Why look for an uncircumcision when there are so many cousins waiting for you?

And here I quote: “His father and mother did not know that this came from Yahweh, who was looking for a matter of quarrel with the Philistines, for at that time the Philistines ruled over Israel.” (source)Book of Judges, 14 1-4 Would the Almighty give in low politics? Yes. All the time. Is he so powerful, with his legions of angels? Why does he not ensure the domination of his chosen people? Israel is overwhelmed by the Philistines, as today by the Palestinians… The more it changes, the more it is the same.

Yahweh God, Yahweh Zeus but also Yahweh Sabaoth, which means more or less General of the Angels Army. “Yahweh Sabaoth is the God of Israel, he is God for Israel” (source)First Book of Chronicles, 17 24 Well? The leader of the heavenly armies is content with one people among all those who go through the world? And he’s reduced to petty politics? Curious that he has so little political power, he who controls the innumerable armies of angels and stars. Disasters.

Sabaoth, plural of the Hebrew word ‘sàbà’: army. The title «Yahweh Sabaoth», which Scripture often gives to God, means Lord of Armies ; it is the heavenly armies, that is, the angels and the stars. The title is taken up by the liturgy in the Sanctus: Dominus Deus Sabaoth; the French translation renders it by “Seigneur, Dieu de l’univers.”God of the universe

Christians dislike Sabaoth. They try to hide the reductive side of God of armies. Docile, the Vatican translators did their best. They wrote “God of the universe” instead. Not to say, it’s classier. Wait a minute? By what right? It’s a gross lie. Shame on the popes, as deceitful as their god. 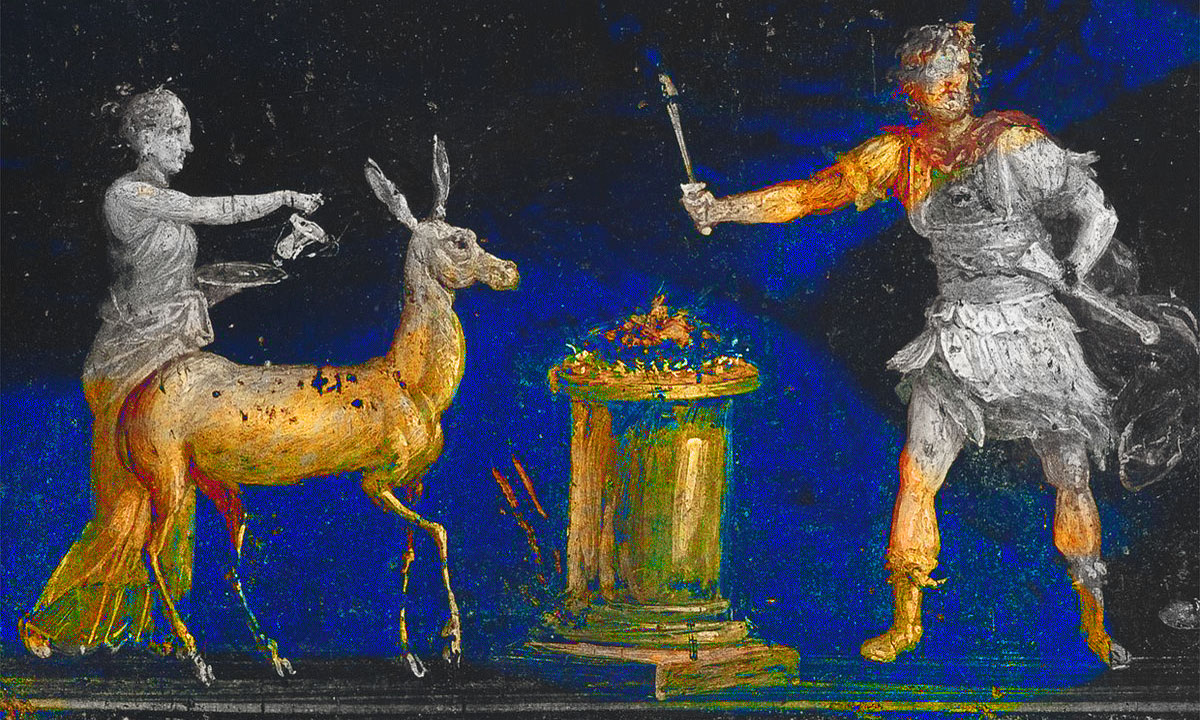 God of armies without an army, pity this Sabaoth. Give him a dime, he needs it. All this crap makes me think. Yahweh may be the right captain for this distraught ship on the dismounted sea of kaliyuga. I criticize it a lot because after Rama, this YHWH does not stand up. As after Obama, we were disappointed by Trump. But it is the law of decline. The cycle has to be completed, and we are not going to improve. Not right away. The thunder is going to roar before the sunny days.

After Prince Charming Rama, what can I say about Yahweh? A stuck marshal, picky, jealous, gentle with the hard, hard with the small. A despot who does not hold back his anger but keeps his forgiveness, a gunman who does not hesitate to slaughter the poor sinners that we are, war crime, everyone on the ground, it bleeds, it cries, it dies. The god of love also shoots civilians. Sacrifice, oblation. Scene of crimes. All victims. Women, children, cattle, anathema, Holocaust, garbage can. Life is beautiful.

Why reading the Bible?

Sacrifice of the holy mass

From David the singing teacher, we find this psalm: “Yahweh my God, you wanted neither sacrifice nor oblation, you demanded neither holocaust nor victim…” (source)Psalms, 40 7 Really? I read that it was the boss, Rama Baal, who forbade the sacrifices demanded by the Druidesses. Rama, not YHWH. A few centuries before, Yahweh Zeus had another opinion. He demanded his share of sacrifices, even of human sacrifices, as evidenced by the sacrifice of Isaac.

These days, the taste for sacrifice has still not passed, it has become sacrifice of the Mass. Every time a priest says Mass, he does not make a symbolic sacrifice, he puts Jesus to death, drinks his blood, eats his body, adding satanic cannibalism to the ritual murder. All this in homage (?) to Jesus who committed suicide on the Roman cross for the remission of sins. His Father in heaven could have found another way to forgive us. When you have heart, that’s what you do. Or else say goodbye to the title of God of love.

At catechism, I repeated: God is infinitely good, infinitely kind, he can neither make mistakes nor deceive us. What a nerve! The examples I cited show just the opposite. Thousands of other Bible verses confirm the repeated breach of trust. We learn beautiful things about Yahweh, how he merline us, how he rolls us in the flour, this rude marshall. Not necessarily to be helpful. He says what he likes when it suits him. Terrifying. Stupid as a president.

Is there any benefit to reading the Bible? Those who have studied it too closely have burned their eyes. As a result, they have lost faith. For my part, I’ve made the sacrifice of the Mass long ago: I no longer attend it. Easy sacrifice. 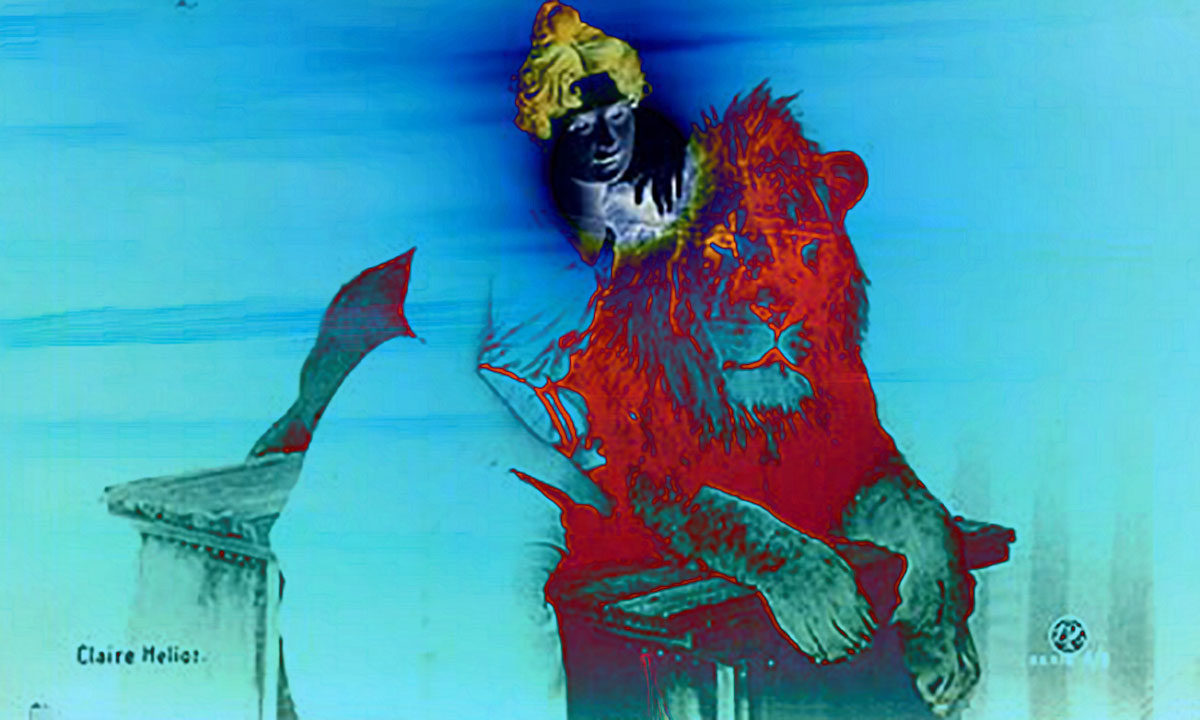 While a sweet woman is taming the lion. See Arcane VIII Strength. Quite weak a strength …

Homo hominis lupus / The man is a wolf for the man