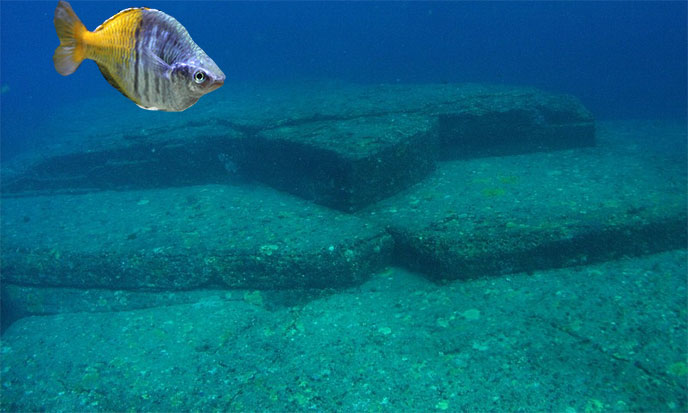 It is especially pleased to see the facts support the hypothesis visionary Colonel Churchward as the sneering at the time had made him lose face. This finding falls battery.

We rejoice especially seeing the facts support the visionnary hypothesis of Colonel Churchward: a major archaeological underwater discovery could confirm the reality of Mu. Near the Japanese island of Yonaguni, divers discovered a strange pyramid, with all appearance of an artifact. 200 yards long and 30 yards high, composed of huge blocks of stone with perfect right angle, the imposing rectilinear building affects more or less the shape of a Babylonian ziggurat.

With its massive form and its imposing proportions, was it built by men much larger and stronger than us? “This object was definitely not made by nature,” said Professor Masaki Kimura, a geologist at the University of Okinawa, the first scientist to examine the site. 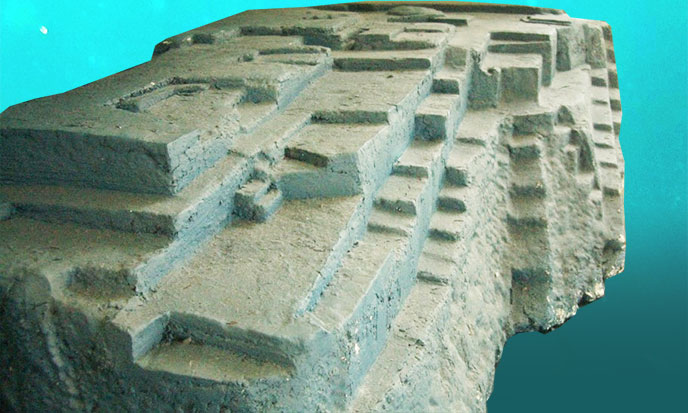 The discovery of other underwater mounds, though smaller, near Yonaguni, provides confirmation of the artificial origin of this structure. There remains a nagging enigma for archaeologists: the first traces of civilization in Japan date back to 11,000 BPBefore Present, fixed in 1950. Why not 2000? Scientists! … This date is roughly the same as the ziggurat, it concerned a civilization of hunter-gatherers, capable of carving arrowheads, but not gigantic blocks. For over twenty years, a passionate debate between geologists and archaeologists who couldn’t admit this structure to be hand-made. 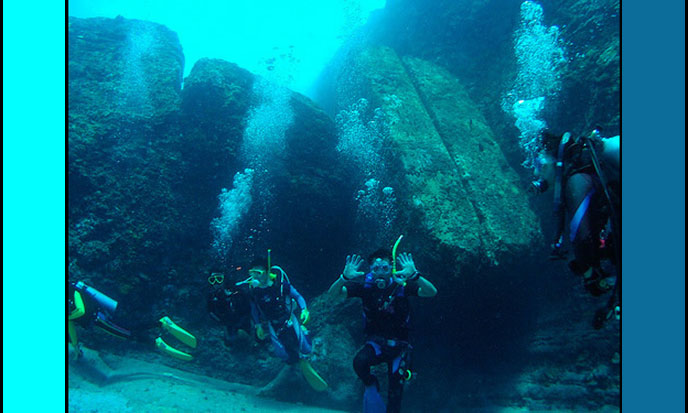 Like anthropologists, archaelogists willingly cling to a simian vision of our origins, bearlike wild humans wearing raw sticks and fur leggings. “There is nothing in the archaeological record which suggest the presence at the time of a culture advanced enough to build a structure such as a ziggurat.”

Once again, the archaeologists are offended by a geologist. This time, their adversary is geologist Masaki Kimura who had another evidence: he also discovered a curious carved stone, dated at least 10,000 BP, which has striking similarities to Churchward’s tablets.

On this carved stone, we can see a UFO-type spacecraft, spirals, elongated human figure and what appears to be characters, according to Professor Kimura. Writing of Mu?  Churward was right, so what? No surprise!

The same Prof Kimura dated the remains of Yonaguni. The underwater structure is at least eight thousand years, but it could even be earlier: 12,000 BP according to Graham Hancock. More images of Yonaguni here.

The emergence of the civilization of Mu, as Churchward said, dates back to 60,000 BP. And its destruction would have occurred around 25,000 BP. Following the fate that would know later Atlantis, Mu has been engulfed by a major disaster, as our planet has seen so many in the last million years.

It is possible that Mu Island did not sink to the bottom of the Pacific. It is also possible that Atlantis has escaped the rapid destruction of which Plato speaks. I have examined this hypothesis in another article. Anyway, on the outskirts of Mu like Atlantis, there was necessarily ports, counters, maritime cities to liaise with these mysterious islands. These are the remains of these port cities found in Mexico to Atlantis or Mu here in Japan.

For those who shamelessly, still doubt the reality of this sunken city, I suggest to climb the sides of Asuka Nara to discover this beautiful work, just opposite the 12,000 years sunken city. 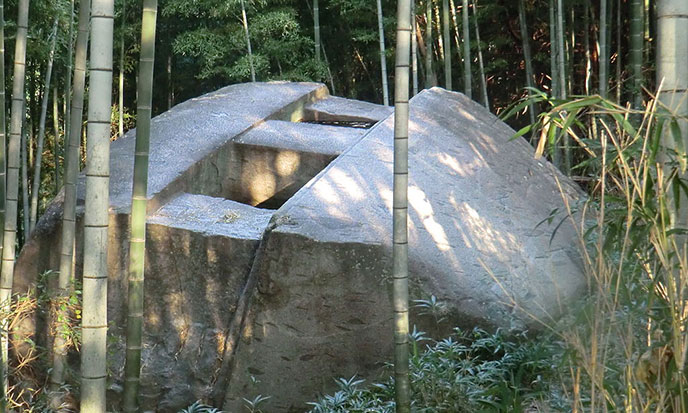 A tapered waist with curved roundness and perfect symmetry, carved out of the rock mass directly in the granite massif, that’s what defeat the last reluctance. Such a masterpiece has obviously not been made by Sinanthropus with a pretty flint ax … Wake up you morons, don’t you know they’ve been lying about our past for centuries?

“Since the advent of cycles was precisely known, the men had the chance to prepare and during these extreme periods, all the peaks in the world became refuges of last resort.

The highlands surrounded by mountains were favored for the shelter they afforded. Five places are noteworthy for being the “arches” providing refuge to climatic excesses. The northern Himalayan plateau gave birth Turanian race, herself giving birth to the Mongolian race, the southern part of the plateau gave the Indian race day. The Iranian plateau gave birth to the Akkadian, Semitic and Egyptian people who occupied the periphery of the Mediterranean. 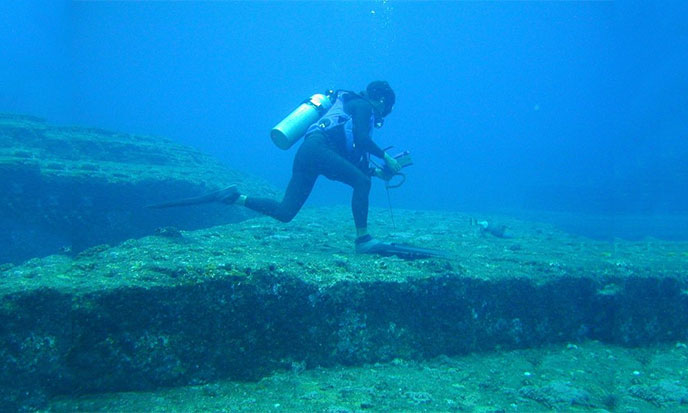 Thus at the dawn of a new golden age25,000 years ago, all these men, three yards tall bully-necked giants, were the departure nucleus of future generations. The 13,000 years that followed saw the development of new companies whose cultural and scientific advances were and are still inimitated. Prowess as they were led to the creation of the gods in human history.” (source)Pierre de Châtillon, Bouleversements climatiques, 2007 Almighty giants. Scholars in flying machines. Teachers who built lightning machines for us in cities where one becomes god.

And then the moon has turned the page.

The last giants are dead, to our relief: they had become demons. What about us? What’s up? What have we made with the gifts we received?