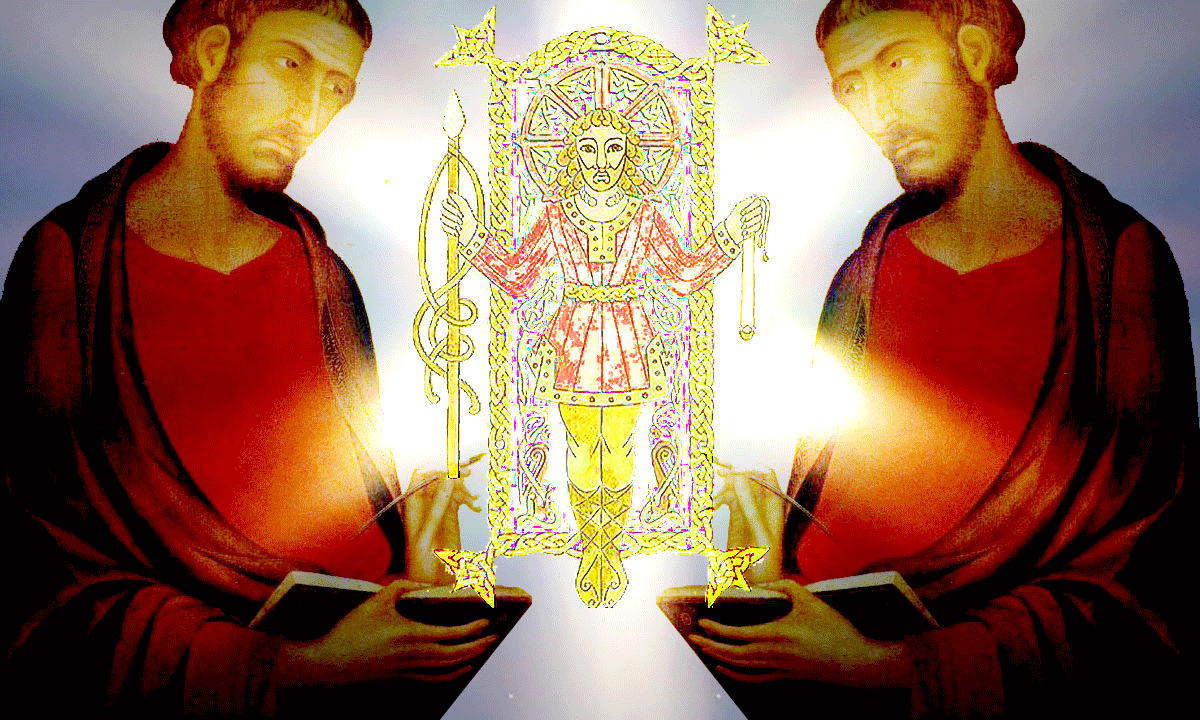 In a previous article, I presented these runic texts that I was given to touch and read while traveling on the timeline. In another article, you discovered the Saying of Iahn the Ancestor, here is that of Lugh the Resplendent. At least a few verses I could remember precisely.

These four Sayings which I called Celtic Gospels are in fact neither Celtic nor Gospels. They date from before the historical Celts. Long before. And if they sing the glory of a Christ, it is not Jesus. The Sayings praise the exploits of Christ Rama. But the matter and the authors are so close that the temptation to call them Gospels is irresistible to me.

Lugh can be written Lug or Luc. He inspired the apostle Saint Luke. I have already dedicated other articles to him: Lugh the Cyclops – The Roaring Sword of Lugh – The four sons of Lugh. Look at what the dominant thought says about it: “Lugh Lámhfada — Lugaidh or Lonnansclech — is a great Celtic god. Very present in Gaul, he is the inventor of all the arts, as Orpheus the protector of merchants and travelers.As Hermes He covers the 3 functions (priestly, warrior and productive), he comes from the marriage between the world of the spirit (son of Cian) and the world of matter (son of Ethnea).” (source)

Lugh’s material is shaped by combat. As for the Spirit and its paranormal manifestations, his “gospel” gives a perfect illustration. The parallel with the Gospel of Saint Luke is obvious. La CroixFrench catholic newspaper says so: “All the characters who intervene in the first chapters [of the Gospel of Luke] do so under the action of the Holy Spirit, who is in fact at the centre of the work of Luke, the Gospel and the Acts of the Apostles. When Jesus opens his mission in the synagogue of Nazareth, he comments on the text of Isaiah that he has just read. In him the Word is fulfilled: “The Spirit of God rests upon me” (Luke 4:18; cf. Isaiah 61). The whole Gospel will show the Spirit at work in the words and deeds of Jesus: healing, parables, words of forgiveness.” (source)

Lugh is an important figure in the Old Druid Religion. The city of Lyon was dedicated to him, as its Latin name indicates, Lugdunum. The fort of Lugh. It radiated around him, looking bright even in broad daylight. High in stature, he was more than 4m tall, as were all his peers, Tuatha of Ireland, Greek Heroes, Olympian Gods, Titans, and Devas of India. For in his time the gods walked among men. 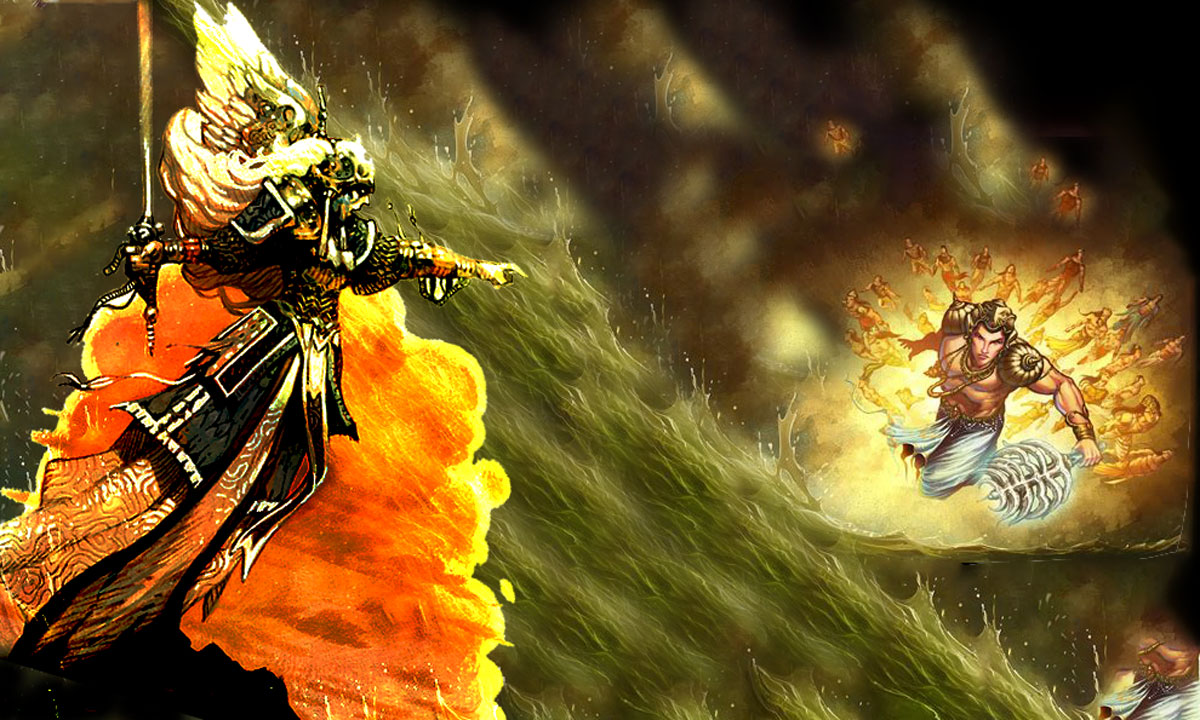 Of course they were not God in the modern sense of the term, which comes closer to the Source as the one God. The former gods were all but unique. They were nicely numerous indeed. The sacred texts of India speak of tens of millions. Yes, that’s a lot. It took people to terraform a planet like ours. All the trades were represented, including legions of combatants, as other entities came from the stars to Terra and its magnificent facilities. A few hundred thousand years ago, exterminating wars ravaged the surface of the globe.

Lugh’s mother is a Fomoire. A people of giants, but of Earth origin. By his father, Lugh is a Tuatha de Danaan, heir to the former gods and god himself. We saw in Lugh the primordial god of Irish mythology. It probably had the same importance in Gaul, since the city of Lyon was dedicated to him. The Roman name of the first capital of the Gauls, Lugdunum, means the fortress of Lugh.

Only Ireland has given us a few legend texts. The Tuatha of the goddess Dana Ann are presented as living in Ireland from where they had driven the Fomoires.

On the Gaulish past before the Romanization, we have only objects, tools or works of art. The Gauls did not write their language. They considered the oral to be superior to the written. In our time, the Koranic schools have a comparable point of view. Then came Caesar. With his Gallic War, he instructed the trial of the Gauls. And the romanization would have changed the Gallic teigneux into refined Gallo-Romans. Do not believe that. Celtic refinement is much earlier. They are courageous warriors, powerful druids, ingenious builders and, above all, skilled artisans for fashion, dishes, jewellery and cooking. The more things change, the more they stay the same…

Primordial God, Lugh? The thing can surprise. We know his parents. Lugh arrived long after the creation of our species, how could one considers him primordial? The most important, yes, not the first. Or perhaps the first to care for the little men that we are, and not to despise them from his height and divine origin. He belonged to the race of our creators. Half of them, okay, but it makes a difference.

Lugh has something of Rama. It is true that I see him everywhere. Rama is a famous friend of men. A magnificent ally of our species. Too bad that the wear and tear of time has distorted his teaching and distorted his wisdom. From Lamaism to Buddhism, we measure loss. A sign of ever-present decline.

Lugh also has something of Prometheus. The friend of men. Prometheus loved men more than his fellow gods because he had created men and not gods. We are his people. He is our ally. He took our side against his uncle Zeus, ie God. Zeus comes from the Greek word theos which gave dieu, ie god. 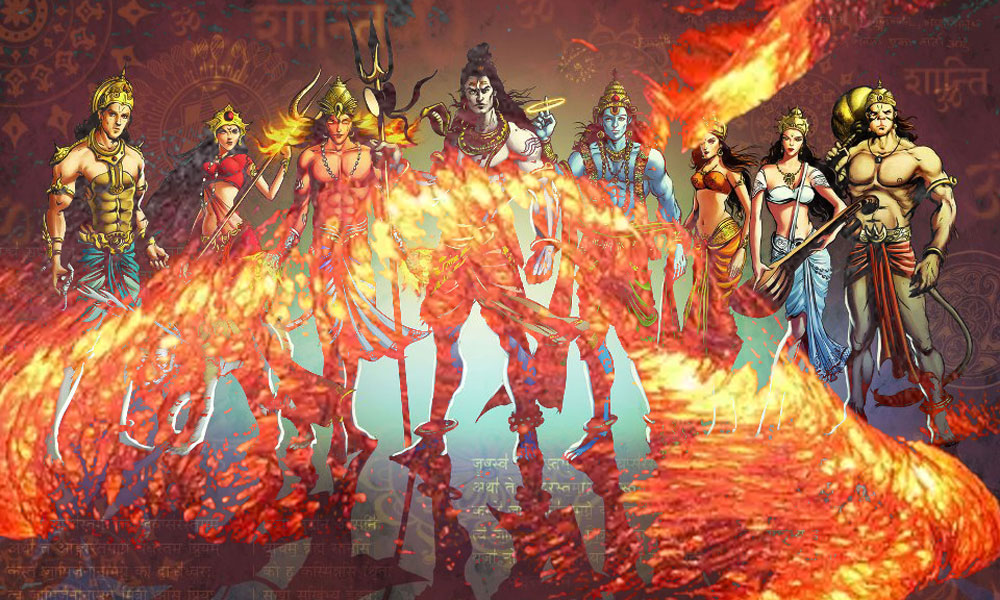 1.1 Ar Ramos was born near the stars, sheltered from the rage of the past. He was born of our Holy Mother, a thousand times blessed be she and her divine descendants. Ar Ramos is one of the most illustrious, praises to his spirit that hovers over the waters. Throughout his life among men, the Spirit guided his word and his hand.

1.2 Ram came out of the Divine Island with the waves of the descendants. Like all the Giants before, when Ram was 9, he passed the Free Choice test. I did mine too.

The Divine Island, you have recognized it, is Hyperborea, the great vessel of the former gods, terraformers of this planet. Being 5 meters high, Ram was certainly the biggest of the former giants. But Ram was very small in front of the first Cyclopes which originally measured about fifty meters… At that time, gravity was much less. For the earth’s attraction was counterbalanced by that of the great ship which occupied the whole northern sky….

1.3 The choice was thus made. Or stay on the Divine Island to work among the Gods his fellows, and grow up near his blessed Holy Mother a thousand times. Or go down to Terra to grow up among humans and work for their upliftment as well as the advancement of their wisdom.

The former gods are our teachers. Education is part of a terraforming. But they accept their role with more or less good grace…

2:1 Ramos was ordained to be a Descendant, for our honor and for his glory. Out of taste for Terra and the harshness of its climates, Ram renounces the cozy comfort, the refined happiness of up there.

Descendant is not taken here in the usual sense. For terraformers, is Descending a god (or an angel) who agrees to live on Terra among humans. Given their gigantic size, the cyclops must be careful not to crush some of us.

2.2 Out of desire to be useful to the weakest of beings, he forgets the blessed encounters, the fabulous beings, the Inheritors, the Fairies, the Amphigurus, and the clique of funny galipotts who hold in his hand.

Here words are lacking to describe unknown beings today. Are they natives of Terra, or creatures genetically modified by terraformers? I can’t say.

2.3 Out of love for humans, he deprived himself of the infinite entertainment of the Divine Island. No more robokinos, no more erostaurants, no more the rare joys that only the Island of a Hundred Thousand Pleasures could provide. Ar Ramos chose. Respected be he, glorified be his name.

There too, I had to forge new words to designate distractions that we do not know…

3.1 His Free Choice? Go down! Before only remains ashes. While descending he ascends to the firmament, conqueror He descends to the heart of the Descendants. Ram smiles with a cheerful air, let his joy remain, amen!

3:2 Recently Ram the Descendant was God among the Gods, chosen among the elect. His noble birth destined him to the richest palaces, to silk dresses embroidered with fine gold, to the three rows of pearls adorning the root of the lingam.

3:3 And behold, he is the shepherd of the flock of sheep, the innumerable flock which Hercules had met, and the island of Hesperides. Now, here he is, a humble sheep shepherd of a bleating flock, does he know that he will become general of an army of a hundred thousand helmets? His noble leader, adorned with curved horns, is Ramos the Ram.

Lugh the Cyclops shows us the natural lineage between the contrasting phases of the life of the great Rama. The shepherd of childhood gives life to the shepherd of men, a theme abundantly taken up by Christian literature: the Lord is my shepherd, nothing can miss me. Or: Feed my lambs, feed my sheep. When Jesus declares that he is the lamb of God, he claims a ram as his father. Jesus would therefore be a Hyperborean son of Ram the Ram. I showed this amazing sonship in another article.

Praise be to him!

12:4 He is come upon a cloud, his faithful flying companion.

I suppose that cloud is an aircraft, like Pegasus or Buraq, Muhammad’s flying horse.

12:9 No matter if he is no longer with us, his companions are on their knees.

Many gaps make the text a bit surreal. If the genius visits me one day in the Akashic Annals, these voids will fill. 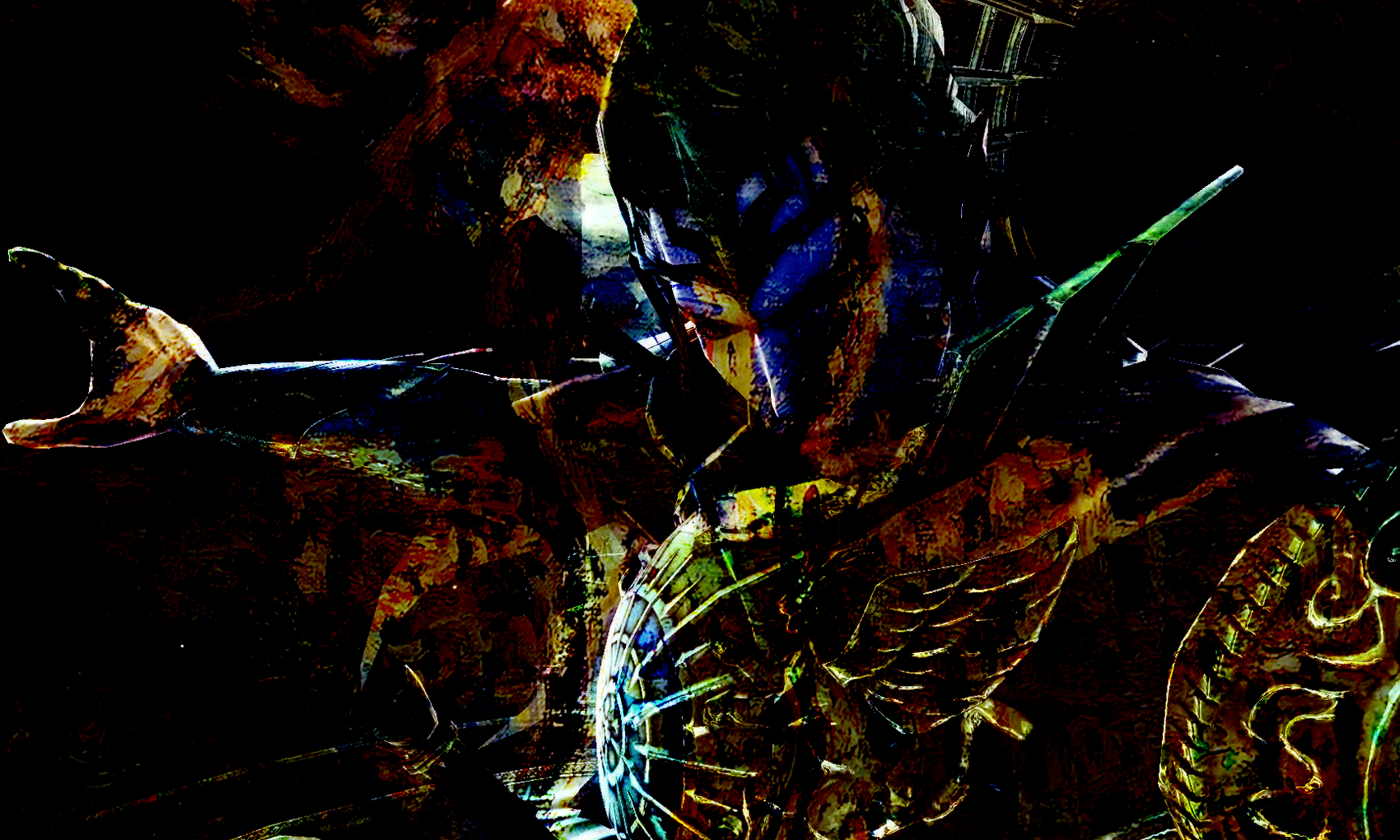