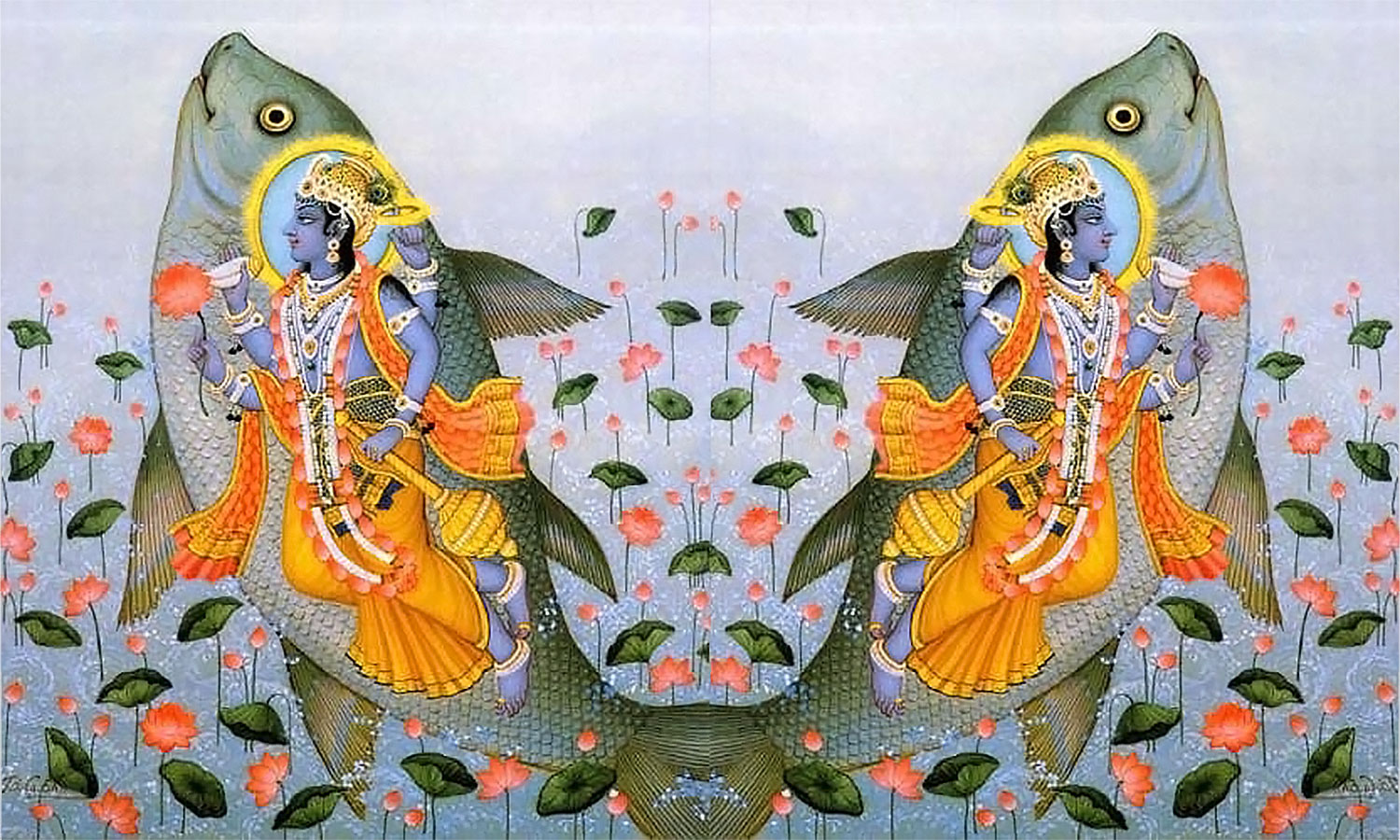 There is a wealth of detail in all the old texts, details that are insignificant to most readers, but which make sense to those with an idea behind their mind. When you don’t expect anything, nothing will beckon you. But if you have a particular representation of the subject you are studying, signs and synchronicities will flow in as you read. These significant details, I call them archi-details. They jump out at me every moment of the day.

By rereading one of my old texts, Manu the Hindu Noah, some of these archi-details amazed me. When I wrote this text twelve years ago, I did not yet have the automatisms that I have acquired since. I deliver the text in question to you, offering my most discerning readers to spot the most striking archi-detail, which comes at the right time to corroborate my intuitions. I first deliver a few as an appetizer.

In the enormous amount of legends that make up the mythology of ancient India, most of our myths can be found, either from the same origin or from describing actual events. So the flood brought Manu, who is both the Adam and the Hindu Noah, to a familiar adventure.

“One day, while doing his ablution, a certain man named Manu discovered in the palm of his hand a small fish which begged him to save his life. Taking pity on the animal, Manu placed it in a vase. The next day, however, the fish had grown so much that he had to haul it to the lake. Soon the lake also became too small. “Throw me into the sea,” said the fish that was none other than the god Vishnu, “I’ll be more comfortable there.” Then the god warns Manu that a flood is coming soon. Vishnu sends him a large ark, with orders to embark two specimens of each living species and seeds of each plant. Manu obeys, then he climbs aboard when the ocean swells and submerges everything.

Nothing can be seen, except Vishnu in his fish body, a huge narwhal with golden scales. Manu anchors his ark to the narwhal’s horn and Vishnu tows it through the waters to the emerged summit of the North Mountain where it runs aground. The fish then said, “I saved you. Tie up your ark to a tree, so that the water cannot wash it away while you are on the mountain. And as the waters recede, you will come down with them.” And Manu goes down with the ebb. The flood destroyed everything. Manu is all alone. His animals colonize the earth, plants germinate and feed them, but Manu remains alone in the world. A year later a woman emerges from the waters who calls herself Manu’s daughter. He marries her, and they have children together, the ancestors of today’s humanity.” (source)

Aaaah Vishnu! Like the Greek gods, he can change his appearance at will. Like the gods of the Bible, he knows that a flood is coming and warns his darling of danger. He also advises him to build an ark, which does not appear in Greek mythology, but in that of the Hebrews, taken from Sumerian mythology. Noah’s ark, I’ve already told you what I think about it. This vessel is much more technological than the Bible claims. It must be said that all these texts are by no means originals. They were copied and recopied in many languages, until the time when no one suspected the technology of very ancient times. 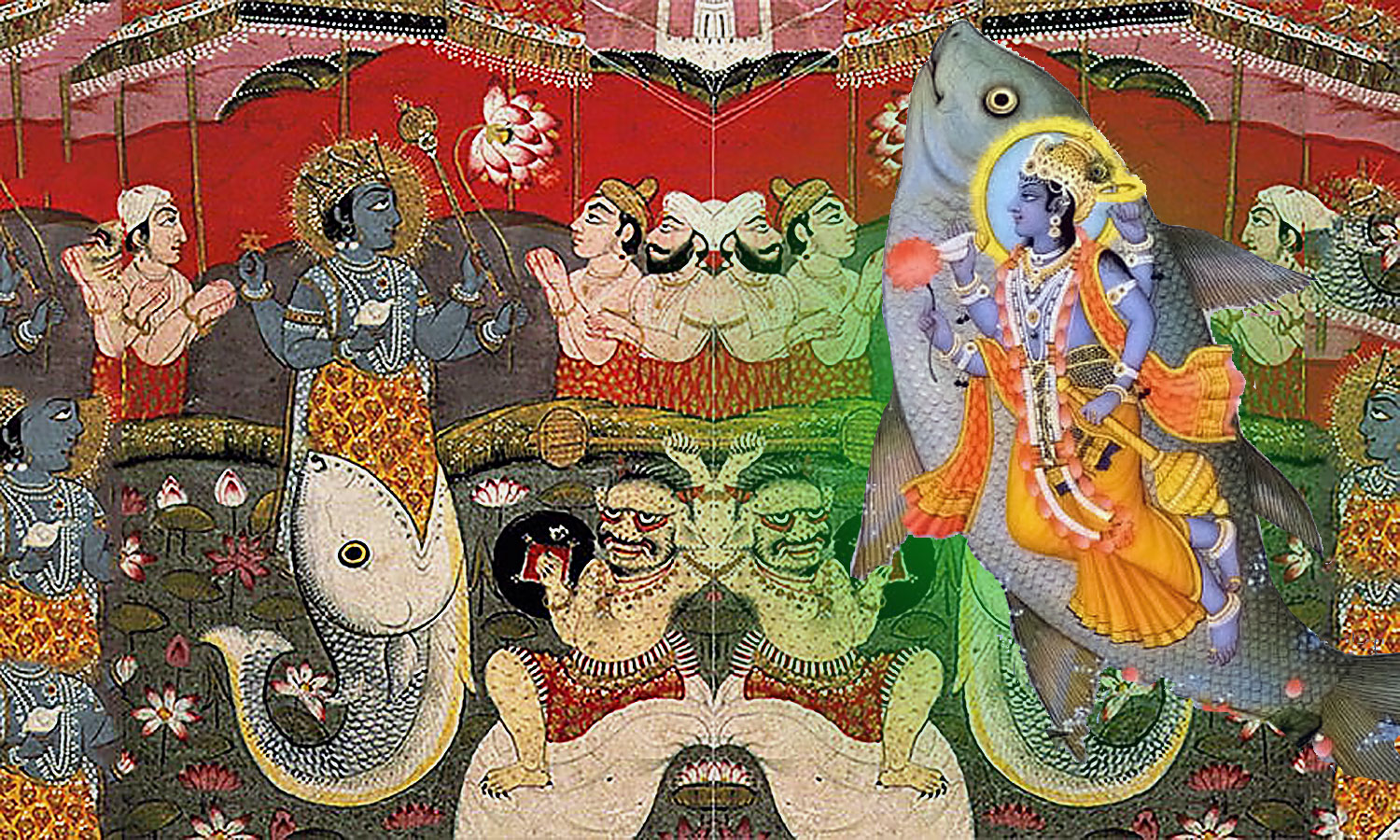 Son of the Sun

The ark will contain, like that of the Bible, two specimens of each animal species. No mention of the plants, but maybe they figured in the original version. If you reread the bold hypothesis I put forward in Looking for Noah’s ark you will understand that the different specimens of plants and animals that populated our planet before the flood were all brought by the former gods, great specialists in the terraformation of wild planets.

If it was about saving what is specifically earthly, plants should have been a part of it, right? But if the great mother ship called Hyperborea, Nibiru, Celestial Venice, Undefeated Sun, Eden, Thule, Ra, Or / Ur, etc. contained all the genetic specimens that could restart life on earth after the Flood, so the ark would have been useless. For me, the ark is a metaphor that the copyists of the original myth could not understand. The ark is the mother ship of the former gods, that’s what I believe. Vishnu son of the Sun and big boss of the terraformers therefore recommended to Manu to take refuge in Hyperborea while waiting for it to happen. And when the sun reappeared through the thick clouds, then it was time to land on Terra and resume normal life.

The great ship above the North Pole has often served as a refuge for the gods when things were too hard on the earth’s surface. Thus during the various glacial phases, in particular during the interminable nuclear winter, during the most devastating fights, to escape atomic explosions and whatnot that the gods of two opposing camps swayed each other on the face. With the damn arsenal they had, we imagine that the generalized conflicts were to hurt very, very much. But it was beautiful to watch. The gods lacked nothing from the show, snugly installed on the tropical balcony of their 4-continent ship-island  …

According to Vedic mythology, Manu is both the equivalent of Adam and that of Noah. Which poses a few questions. Why are these archetypes everywhere? If he is Adam, who are the seven wise men that can be seen in the pictures? Other humans? In this case Manu is not the first … Gods? In this case they look exactly like humans …

If Manu is indeed the first man, then these seven wise men must be seen as the main former gods. The Elohim of whom the Bible speaks are also seven in number. Let’s look no further. They are the same. If so, each of these seven sages or Elohim was the boss of one of the seven days of creation. In which case they are not all alive at the time of Manu. Or the eldest would be several billion years old …

In the name of Manu there is the sound man, Mann, Man. Human being. Thus Manu is Man, the original Adam. Manu is also Noah, the one who protects animals and people against rainwater which fell continuously for forty days. 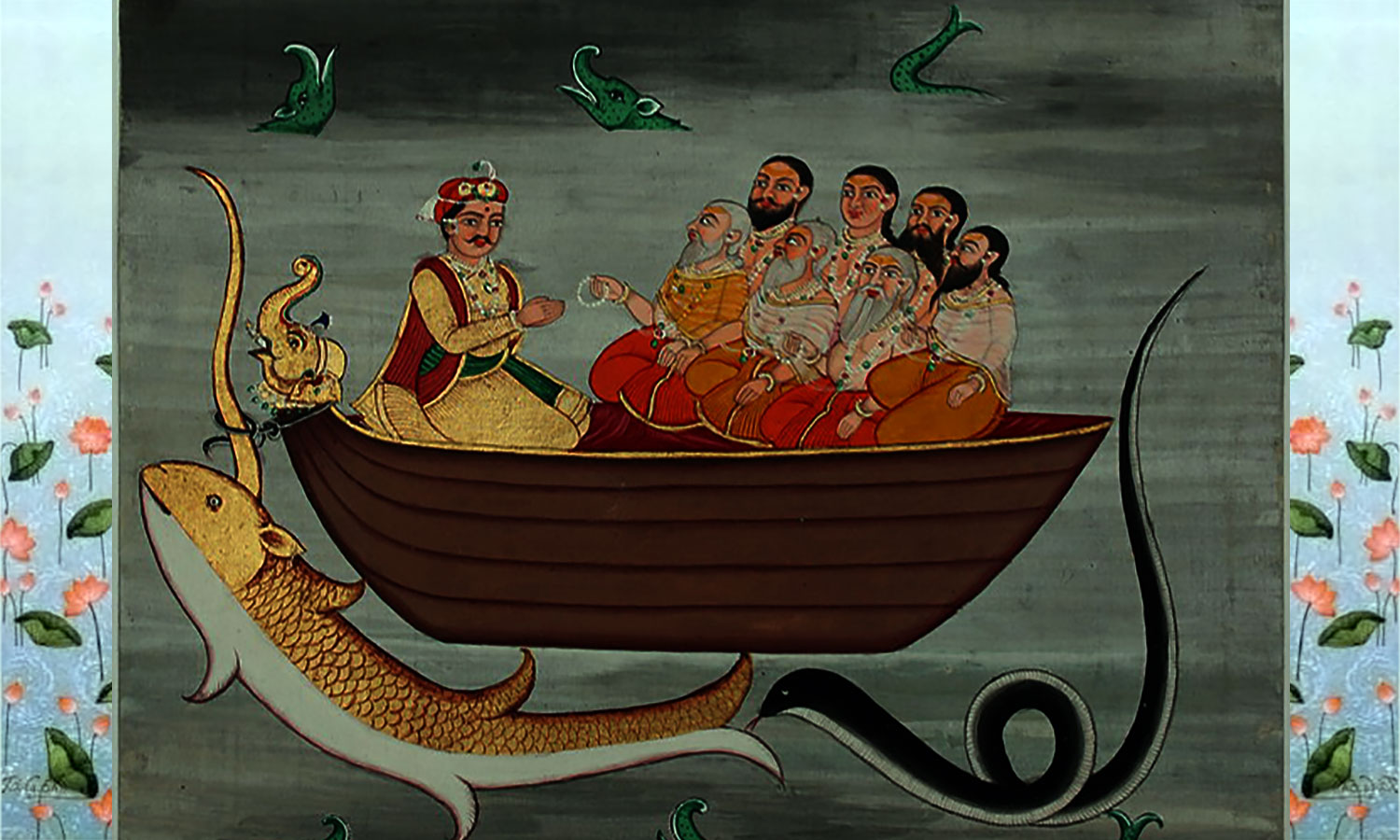 The Shaivites consider that Shiva, the supreme god, has two paradises. The Kailâsa, Kailâsha or Kailash, is the second of the Hindu paradises; it is located above the sky (Swarga). It is the abode of Shiva. It is identified with Mount Kailash Parbat of Tibet, it is the Ghang Rimpoche of the Tibetans (6715 m). The Hindus assume that Shiva and the god of wealth Kuvera, have fixed their stay in the Himalayan range. They each have their city and their palace. Alaka is the city of Kuvera, that of Shiva is called Shivapura. To be admitted to this double paradise, you must have spent your entire life worshiping Shiva and his lingam.

Double paradise, note the formula. A paradise located not on earth, but above the sky? Really does that remind you of no memory? In this case, I guess you haven’t read Eden Saga for a long time. I am referring to this paradise above the North Pole, Hyperborea. I have shown that it is an artificial planet, what is now called a mothership. Hyperborea is the intersidereal geostationary base from which the “astronaut gods” terraformed this planet. This wandering planet returns when the need arises. And for us, it’s not a piece of cake.

When the Sumerian tradition mentions the planet Nibiru, it speaks of Hyperborea. Mount Olympus where Hera, Zeus and the Greek gods live is another metaphor for this paradise in the sky. The Bible calls it the Garden of Eden, or even the earthly paradise, not because it was on earth, but because it was not far from it and its mass occupied half of the sky. When the Middle Ages speak of the Celestial Venice, it still speaks of Hyperborea. Celtic mythology calls it Gwenwed, the sphere of white light brighter than a thousand suns. (source)

And when the Shaivite texts speak of the Mountain of the North, what else do they mean? Some Chinese texts specify that this very high mountain is located at the North Pole. Well ? There is no mountain at the North Pole. Except the one which occupies the center of the Hyperborea mother ship … Remember that this word of Greek origin literally means above the North Pole. Above, yes, you read that correctly. Like the flying island of Aeria described by Plato …