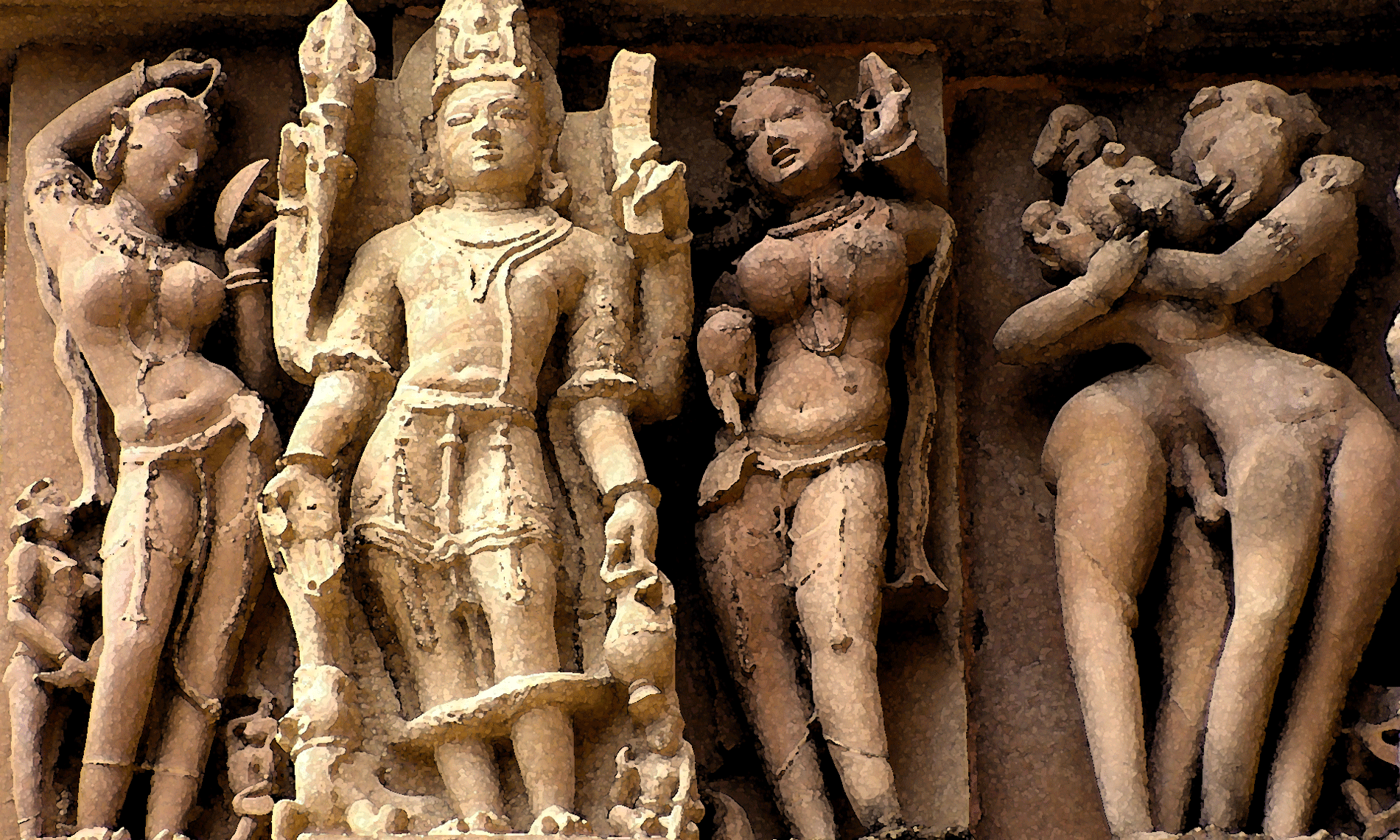 Ancient religions offered a good way to raise awareness with some hope of one day awakening. New religions are wary of enlightenment. They preach a counter-initiation. They are still right in what they say, but wrong in what they deny. And what they deny the strongest is the body.

It is surprising to note that most religions refuse debauchery, the exaltation of the senses and even sexual pleasure without the aim of reproduction. This involutionor regress is all the more incomprehensible since the filled body was originally considered to be the best instrument of divine worship.

Certainly, good morals, public order, morals, popular tranquility, the docility of the voters, the imbecility of the elites too, in short, lots of categorical imperatives weigh on the most holy work of flesh. It was put away in the closet of the last century, as if it were shameful to take pleasure. If sex may seem unethical, it’s recent. However, it has always been useful in spiritual evolution.

Is it sexual? Of course it is ! When a nun has taken her vows, she finds herself united to Jesus and wears a covenant to tell the world. The ring on the finger is an obvious sexual symbol. The nun became the wife of her God.

The thing is commonly accepted by the Roman Catholic Church. His exegetes always wanted to see in the Song of Songs a mystical poem celebrating the wedding with God. Ah yes ? But this god, tell me, it’s Eros himself! Read it again, you will tell me news.

It is a suffocating beauty of sensuality, carnal tenderness and physical love. Yes, this is probably the way to talk about it. Thus mystical marriage became in the Middle Ages a common form of religious elevation. Many Christian saints have known this type of union.

But not only Christians. Hierogamy – from the Greek hieros, saint and gamos, coitus – is an ancient rite found in the Orient, throughout the Mediterranean basin, in America, in Africa, in Oceania, actually all over the world and since the night of the time. And that is understandable. Is there a safer way to experience absolute love? Giving one’s life for those we love, like the crucified? I like giving life to the one I love as much. Hieros Gamos, the Olympic Games of Love. Mind-blowing.

This tendency to sexualize the mystical impulse is found more or less in all cultures, all religions, at all times. Because it is due to the very nature of the relationship that the body lives with the inner god, when it is incarnated. The body awakens, like the Sleeping Beauty under the kiss of the Lord Charming. The incarnation of the god is an orgasm which concerns not only the sexual center, but all the chakram. It is called sacred or total orgasm.

When awakening, the body reaches omnipotence, the true name of absolute love. He exults with all his fibers in an ineffable sexuality. Ineffable, because no word can describe the intensity of total orgasm. Hence innumerable mystical poems which attempt to do so, but for lack of an appropriate vocabulary, they use the one usually reserved for sexual intercourse. Because that’s what comes closest to their feelings. Or because it is true.

The ordinary orgasm lets the energy of the kundalini come out through the sexual chakra. except in the practice of tantrism. The project is to let the kundalini develop along sushumna, the central channel where the chakram pulsate. Thus, from center to center, it will gain the thousand-petalled lotus, the center of the fontanel, whose effusion means union with the inner god.

The holy spirit then descends into the sanctified body. In a different vocabulary, it is the fusion with the double. And hop ! The world is stopped. The look has turned. The adventure is starting. This adventure will take the color of all subtle centers. Center by center, the adventure will be basic, sexual, guts, emotional, magical, visionary and transcendent. All along the chakram line.

But the passion that takes hold of our being is not the fatal drive of an addiction. It is a free choice to love, without condition, without limit, without end. And it looks damn like a gigantic night of love that would never end. These weddings are the alchemical weddings, the evil sabbath which led many witches to the pyres of the Inquisition. The Devil in question is that of the tarot. It expresses the rise of energy which is a prelude to awakening. But the awakened people are frightening. When the crowds are afraid of something, they burn it.

Okay, there is nothing Catholic about these weddings. But the pyres are not human. Alchemical weddings do not belong to the devil or the good god. They are a stage on the path of light. They are one of the mysteries of the inner path that we all have to travel, from the incarnation to total liberation, the state of Buddha, or the arcane The Fool in the Tarot of Marseille.

The myth of Aristophanes

According to the myth of Aristophanes, the primordial man was androgynous. Not only did he have both sexes, like any androgynous self-respecting, but his body was double-sided: one side is a male body, the other a female body. Two beings joined by the back. Which begs a nagging question: how did they poop?

Hence their separation? Plato does not comment on this crucial point.

“In the past our nature was not what it is today. First there were three species of men, and not two like today: the male, the female, and in addition to these two, a third composed of the other two; the name alone remains today, the species has disappeared. It was the androgynous species that had the form and name of the other two, from which it was formed. In addition each man was round in shape on a single head, four ears, two organs of the generation, and all the rest of it.

They also had extraordinary strength and vigor, and as they were of great courage, they attacked the gods and attempted to climb the sky. So Zeus deliberated with the other gods on the course to take. The case was embarrassing; they could not decide to kill men and destroy the human race with thunder, as they had killed the giants; for it was to put an end to the tributes and the worship which men paid them; on the other hand, they could no longer tolerate their impudence.

Finally, Zeus having found, not without difficulty, a solution, he cut the men in half. Now, when the body had been thus divided, each, regretting his half, went to her; and kissing and hugging each other with the desire to blend together.

It is from this moment that the innate love of human beings for each other dates: love recomposes the old nature, strives to merge two beings into one, and to heal human nature. Our species can only be happy on one condition, that is to fulfill its amorous desire, to meet everyone the being who is his half, and thus to return to our original nature.” (source)Plato, the Banquet, Extracts 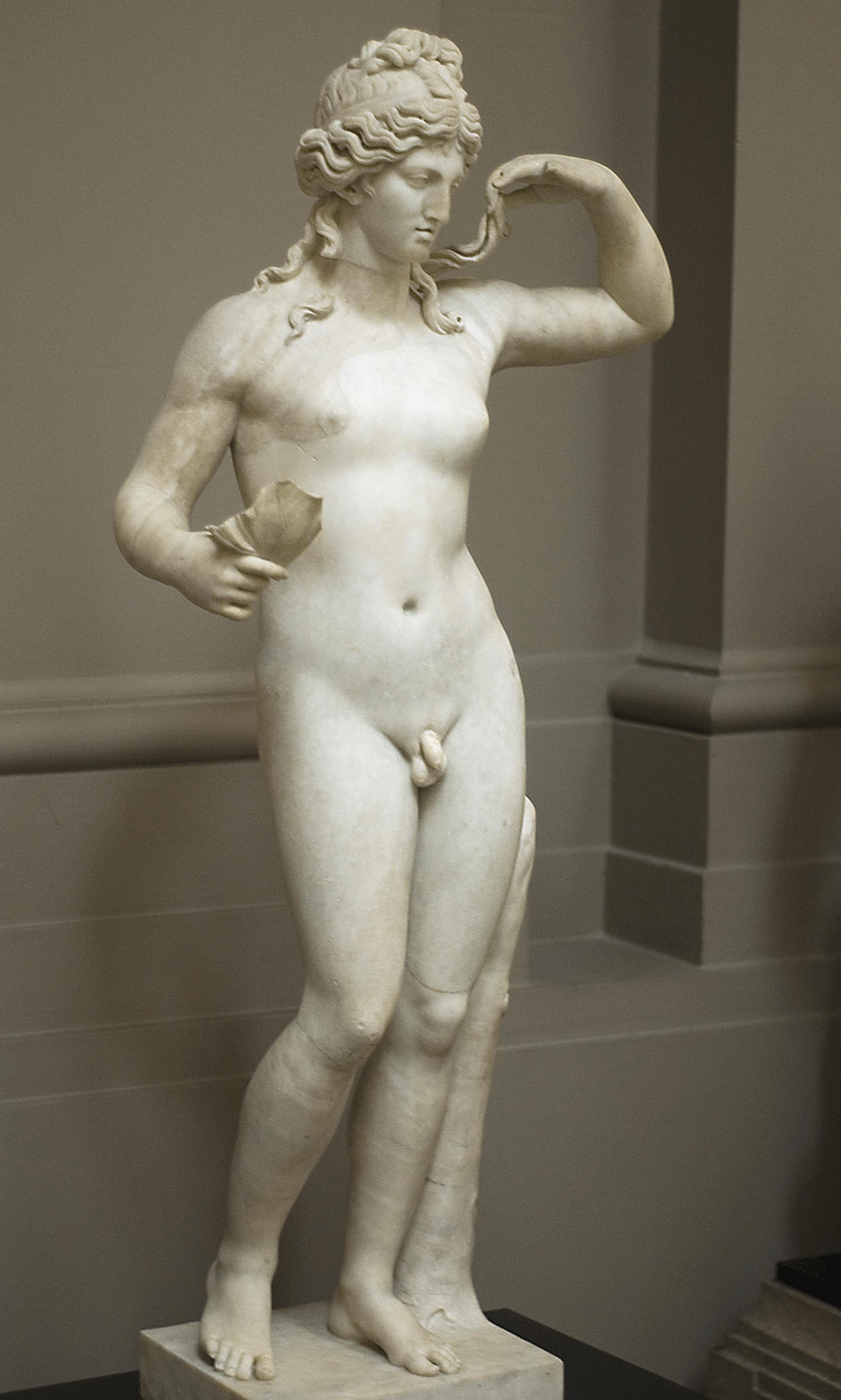 In short the primordial hermaphrodite was a fanatic sex addict and a permanent fan of self-sexuality. In short, we have a charged inheritance.

Generally speaking, the carnal union of man and woman is nothing more than a hermaphrodite. The hermaphrodite proper is frightening, but also fascinating, that it represents, in one body and one person, a sort of walking coitus. The moment – by definition transitory – of sexual union is permanently acquired and manifested permanently. Whereas the spiritual union of man and woman, that is to say, the union or even the fusion of the masculine and feminine spiritual qualities corresponds to the androgyne. Androgyne literally means “Sir and Madam”. This is also, in modern Greek, the daily usage of this word.

The religious dimension of the androgyne, as a symbol of spiritual perfection, is notably recognizable by the fact that in most religions, male priests and religious wear robes, that is, clothes that the lay use attributed to women. In alchemy, the final perspective on the hermaphrodite and the androgynous is to recognize that the carnal and / or spiritual union of man and woman has something to do with the Philosopher’s Stone. (Cairn Info, revue Diogène)

This is why Rosicrucians speak of “chymic -or alchymic- weddings“. Image of the phoenix, rebirth through carnal knowledge.

The primordial androgynous of the Greeks is to be compared to the permanent union of Shiva and his consort. For its worshipers, this sacred coitus is the pillar of the world, the lotus of perfect harmony. And hierogamy, holy union, is the surest way to experience the divinity in us.

The temple of the body

In India, a mystical country if ever there was one, many ancient bas-reliefs exhibit rather raw scenes, which one does not expect to find on a temple. Men, women, animals make love in all positions of Kamasutra. However you will say to me, the temples are sacred places.

Yes, in India too. But what sacred are we talking about? In the past, he was cheerfully naughty. And not only in India. Some sculptures from our medieval cathedrals are quite enjoyable and cheerful. These people knew how much love we make is awakening we give.

Hinduism has a very respectable treasure in this Kamasutra. I always read it as a manual of sexual initiation for the use of the first humans who knew nothing. This very ancient precise sex, detailed, almost clinical and completely explicit, is no longer understood as it should be. It was the gods our masters who wrote it for the edification of our distant ancestors.

Yes, the former gods, same as the author of the Decalogue. Only these say the exact opposite. It takes all tastes. If you don’t like it, don’t disgust others.

Our era is obscene and stuck. From one extreme to the other. Very far from the salutary Middle Way. As a result, we cannot understand how free sexuality could be a path to spiritual elevation and enlightenment. It is however simple. Check for yourself.

If you want to cleanse your energy pattern and unlock your chakras, make love with love. You need both. Give, take. Offer, receive. 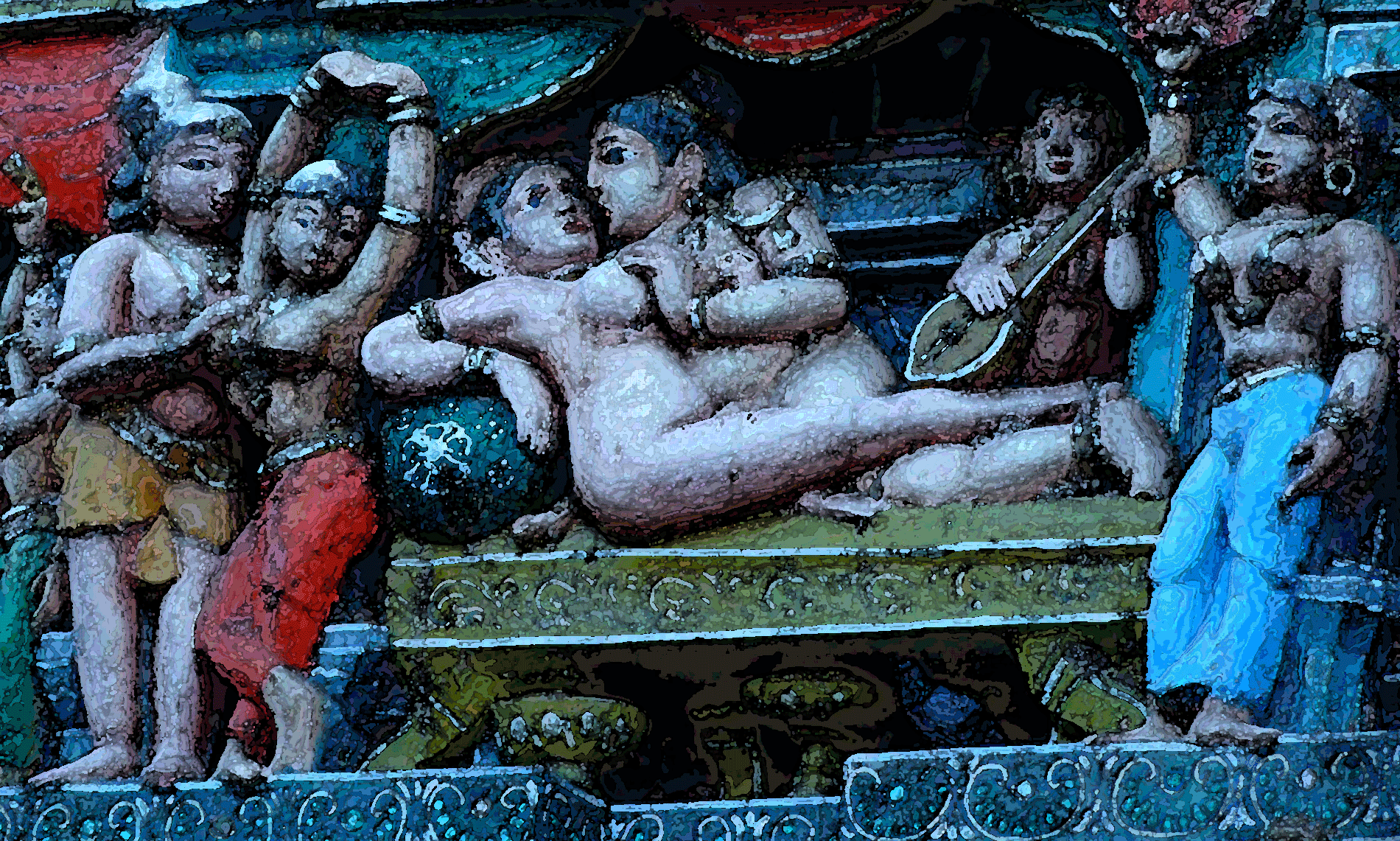 Like others before him, Jesus said it too. Our body is a temple, the only worthy one. Kill it, it can revive after three days. By love.  Believe without believing.

As flies to wanton boys are we to the gods : they kill us for their sport.