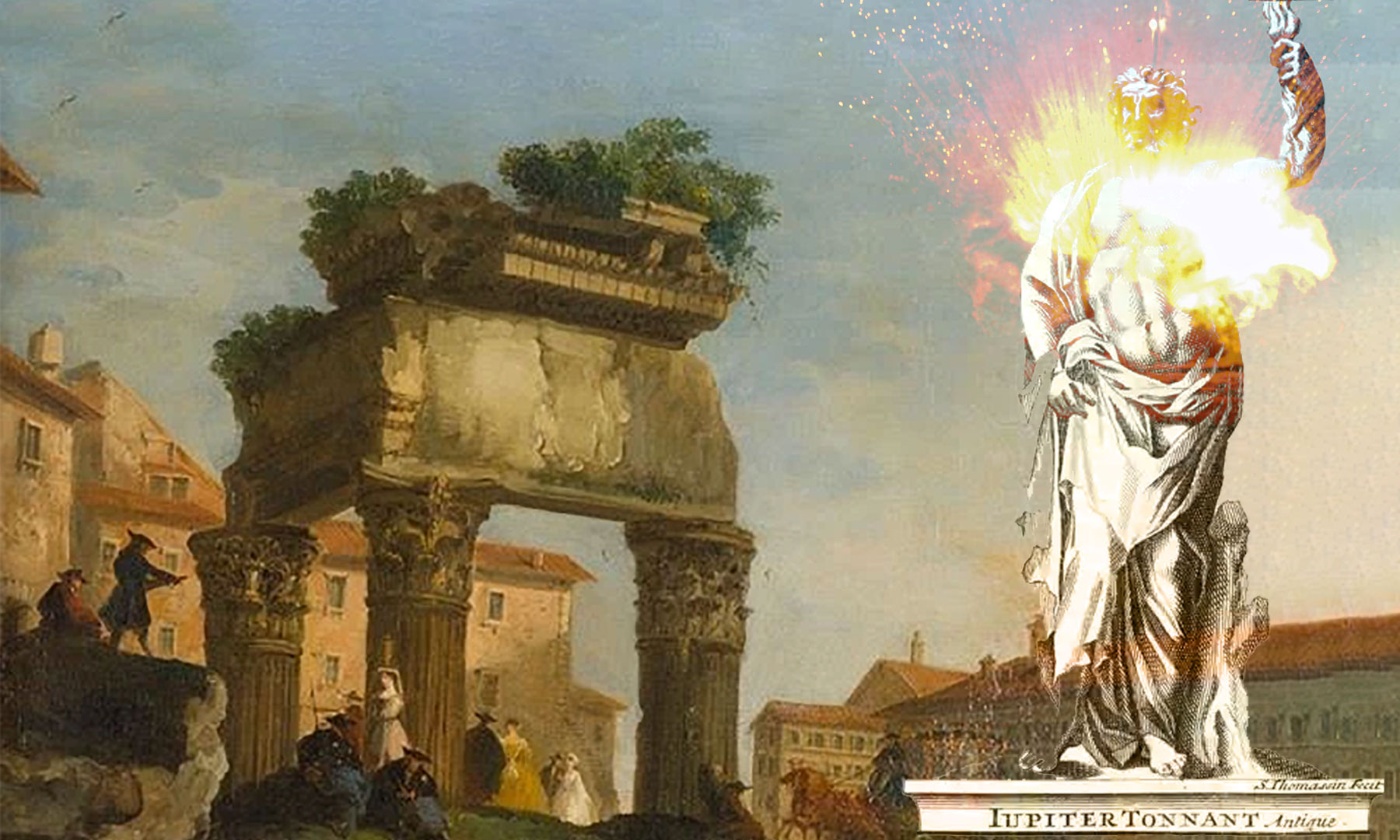 Zeus, the god of the gods who reigns over Olympus, is the all-powerful master of lightning. In Rome, the ruins of the Temple of Jupiterimage above received his avenging lightning, irritated that we reduce him to his favorite weapon… which is not even his! Above all, lightning is the joujou of our gigantic ancestors the Cyclops …

Champions by size, around 50m, champions for seniority, hundreds of millions of years, the Cyclops belong to the first humanity. They were the first masters of Terra. They are the masters of lightning. They also master the art of forging and electronic engineering: they know how to manufacture terrible weapons… This is how they offered Zeus the weapon that made him all-powerful, the lightning that kills or divinizes.

Thor, the Scandinavian god, possesses a magic weapon called Mjöllnir, a hammer that throws lightning, capable of destroying armies and fortifications, but also capable of rebuilding the ruins. This is probably some technological weapon, the distorted memory of which was transmitted to us by the myth. Thor, for some authors, would be a Nordic avatar of Zeus: nothing surprising if he mastered lightning.

I hold him to be a male avatar of the mighty Hathor, from whose name his will have been drawn. Thor in my opinion never existed. He is the macho ego facing the unacceptable reality of an all-powerful goddess, who mastered lightning and thunder, and who was the undisputed mistress of the planet. At that time, the little guys had only to behave themselves, the Matriarchs beat them with no sweat.

Many are the gods who were the masters of lightning, whether it is indeed thunder and lightning, or whether it is a bottle lightning, a ray lance or other electrical equipment. For this reason, even the Ark of Alliance deserves the Lightning Launcher label.

In every traditional pantheon, in America as in Europe, in Asia as in the Pacific, one can find a god of Lightning who also presides over harvesting, fertilization and naturally rain, like Tlaloc or Tchac the Trickling. Let us quote Perun, Ramman, Baal, the list, vertiginous, shows us the universality of this mastery. Lightning in all its forms was clearly part of the arsenal of the former gods.

They knew electricity, which can be found in Mediterranean antiquity. They knew nuclear fission. They knew the journey to hyperspace, since they came and went from the solar system to the Big Dipper in a few moments. I said they lived on the planet Ur, under the sun of Alcor, one of the minor stars of the most famous constellation in our country: Ursa Major, the Great Bear. 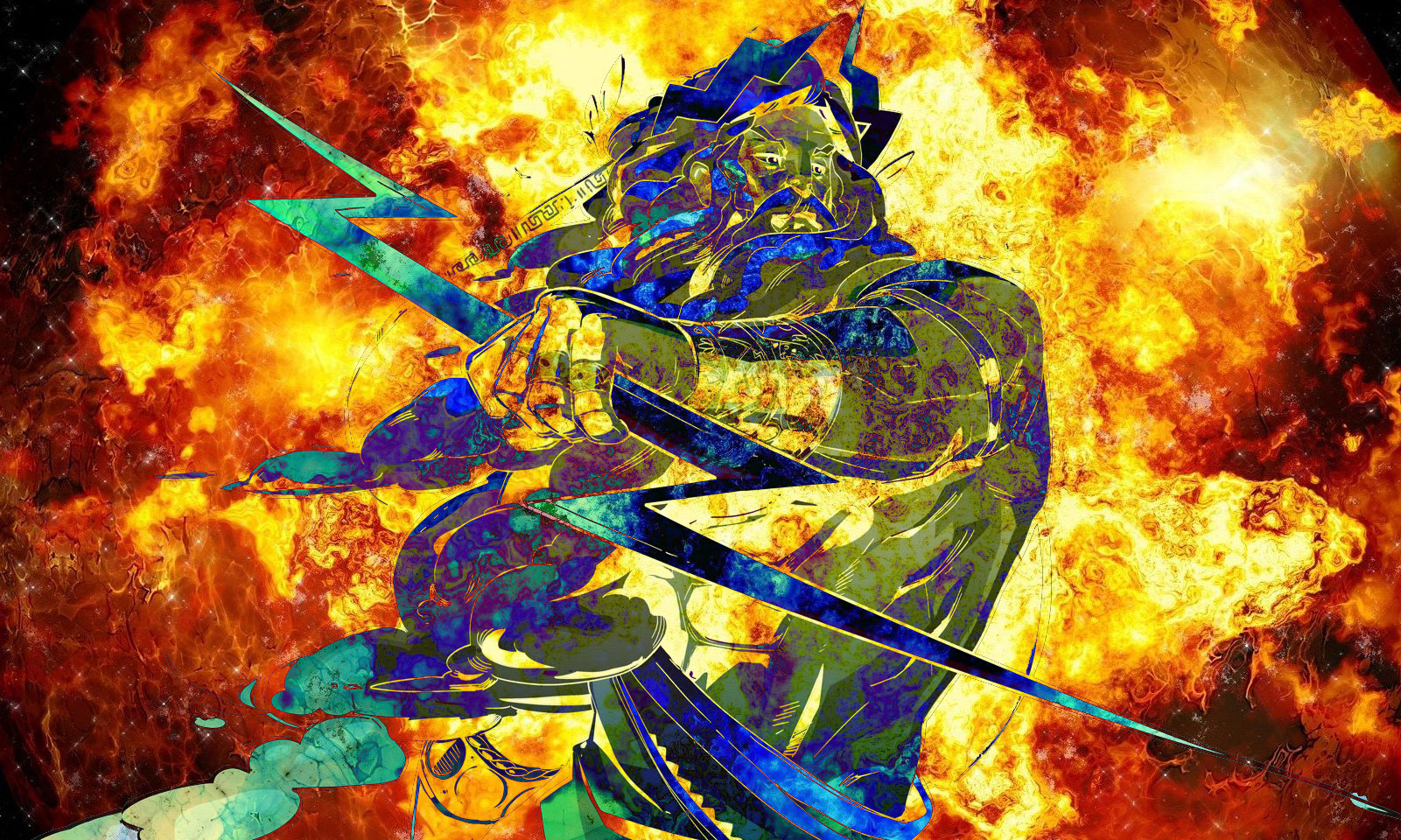 Lightning is one of the weapons used by Zeus, who has others, as I said. The god of gods sometimes has ram horns that crown his skull. Skull, horns, crown… Always this KRN sound so common in the stories of the former gods. Two or three days ago I thought about all these words in KRN that evoke the powerful and spirituality: crown, horn, crane,skull in French cairn,  etc and I discover by chance that lightning in Greek is said KERAUNOS and there I thought “there is no such thing like chance” writes E.B. faithful reader. Agreed. Everything happen on purpose.

To this list must be added Kronos, ie Time. Once upon a time lightning was burning at every moment the roaring sky. Thousands of lightning flashes were pouring continuously on lightning-powered power plants like Avebury or Stonehenge, Tiahuanaco or Puma Punku, the megalithic sites of Russia and the Pacific, the cyclopean constructions of Sardinia and Malta. There was a time when the masters of lightning collected enormous amounts of atmospheric electricity, lightning water rich in natural nitrates, while during gigantic pyrotechnic shows hundreds of initiates received the gift of Isis: the lightning that makes the mind perfect.

And also Carnac and Karnak. Let’s not forget these magical places of protohistory. The pre-celtic world of the Hyperboreans has four energy capitals, four sites equipped with powerful lightning plants. There is Carnac in Brittany, Kaernàk/Caernàch in Italy, Karnak in Egypt, Carnagh in Northern Ireland. We know about Carnac in Morbihan and its menhir alignments which I explained were high voltage lines to carry lightning, Keraunos. In Egypt, the Karnak site was also a lightning trap. Near Bergamo, there is Cavernago (Kaernàk/Caernàch) which is very similar to Carnac and Karnak. Cavernago was an important lightning power plant and the third capital of the pre-celtic world. The fourth is the village of Carnagh in Northern Ireland, on the southern border near Monaghan.

The lightning of Zeus is also found on the planet that bears his name. Indeed, on the well-named planet Jupiter, it is a commonplace and very violent phenomenon. “On Jupiter, there are thunderstorms almost similar to those that detonate on Earth, with lightning strikes. The power of these phenomena is however much greater, in correlation with the size of the planet. Some lightning strikes emit up to three times more energy than on Earth. Some of this energy is emitted as radio waves that can be detected by Juno, the probe that flies over the surface of Jupiter every 53 days.” (source)

It should be noted that this name was given to it in ancient times, when giant telescopes did not yet exist, and that ancient scientists had — in principle — no way to detect these storms on the giant planet. It has always been thought that its name was given to it because of its large size, Jupiter being the largest planet in the solar system. So? How do we explain this amazing coincidence that makes her the planet of lightning?

I tend to believe that the very high technology of the former gods had given them all possible information about all the planets in our system. Otherwise we would have to invoke once again the chance which, as we know, does not exist. This false coincidence reminds us that our distant past was neither wild nor barbaric, but full of science, knowledge, architectural achievements that cannot be explained or even reproduced today. All it takes to get scientists to rectify once and for all the official vision of the distant past.