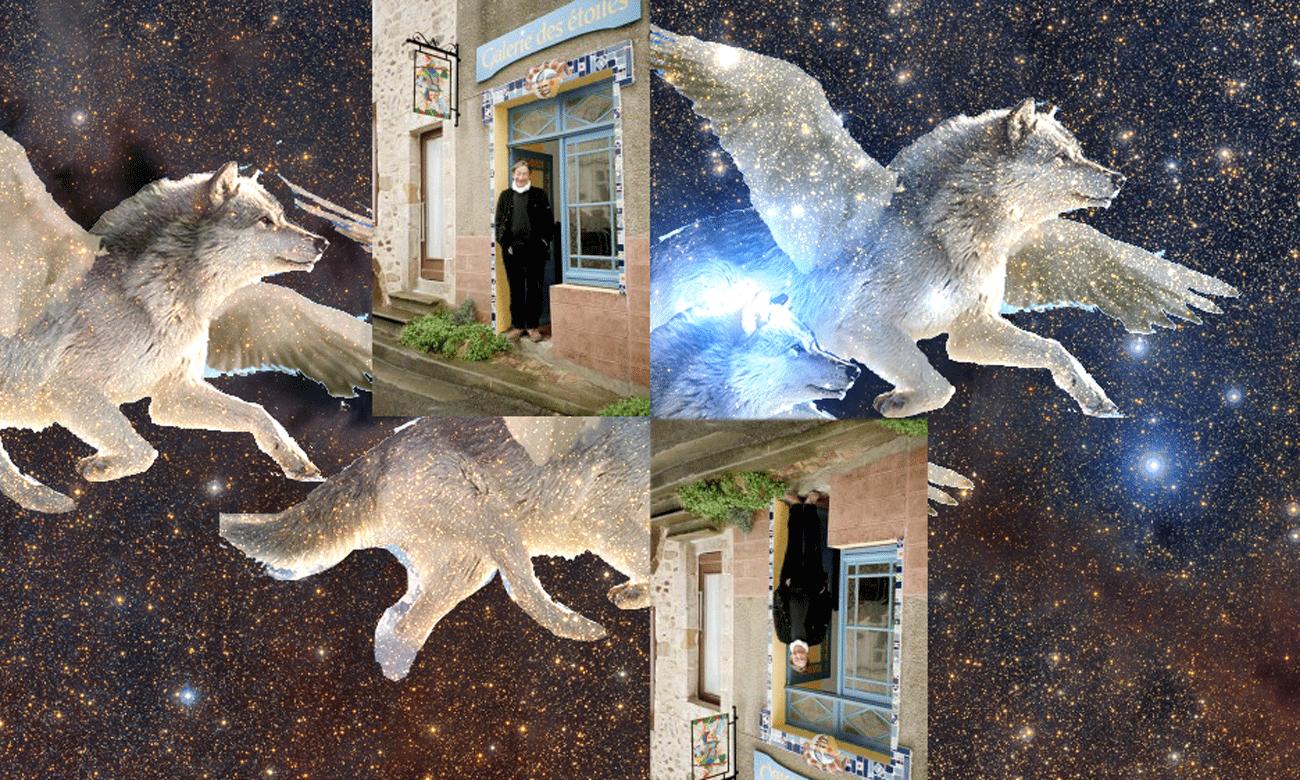 Yes, this year again, the Wolves will fly. About twenty nights, during their sleep, the Wolves will experience astral flight within the flying pack. If you are not yet registered, do quickly: the seats are counted, I do not want a group too heavy. A dozen people is the ideal number. If you already have an astral experience, join the pack.

At the beginning of January, a few readers have the opportunity to cross the mirror. Reading me is good. Living it is better. You can take part in a rare experience: the astral journey. At night, while you sleep, dreams go well. From these dreams you will get little usable information. The countless Keys of Dreams are of no help, because written by ignorant or worse, psychologists. The only key to dreams is to live them for yourself. So I propose you to experience conscious flight, the lived dream, in a group of warriors supervised by myself and several experts of the astral.

In addition, what we call dreams come to life as charming or terrifying stories that have little to do with what really happened in your sleep. The advantage of the group flight allows to exchange information, memories, points of view on said dreams, which makes possible an illuminating synthesis. For me, after many such experiences for thirty years, with each new adventure, I am Alice in Wonderland.

After the fact, rich of this new and interesting experience, flashes will come to clarify the true path of the Flying Pack and you will remember its exploits.

This will be my third experiment. Five years ago, my first successful attempt. I started a new experience last year with a second 20-night session. All the Flying Wolves remember the serious incident that made me interrupt the session. The astral journey is not insignificant, especially when one wants to venture into the astral top, where the Super-luminous are. I found myself in an awkward position in front of an archangel who shot me. A ray of light broke my neck. I have some after-effects. Burned by this mishap, I absolutely want to ensure total security for all participants.

But the desire for astral adventures marked all the participants. As soon as I announced a new cycle of Flying Wolves, candidates flocked in large numbers. I had to refuse applications. Such enthusiasm puts pressure on me. Everything will be done to prevent trouble from happening again.

Alone, I don’t feel too much. To frame the pack of Flying Wolves, you need experienced, reliable, sensitive but not impressionable lieutenants. I had the idea of doing a scout flight in a small committee. Four warriors accepted the experience. I led this small group in the infinity of the astral without knowing what to expect. Above all, the memory of dreams had to be as complete as possible. 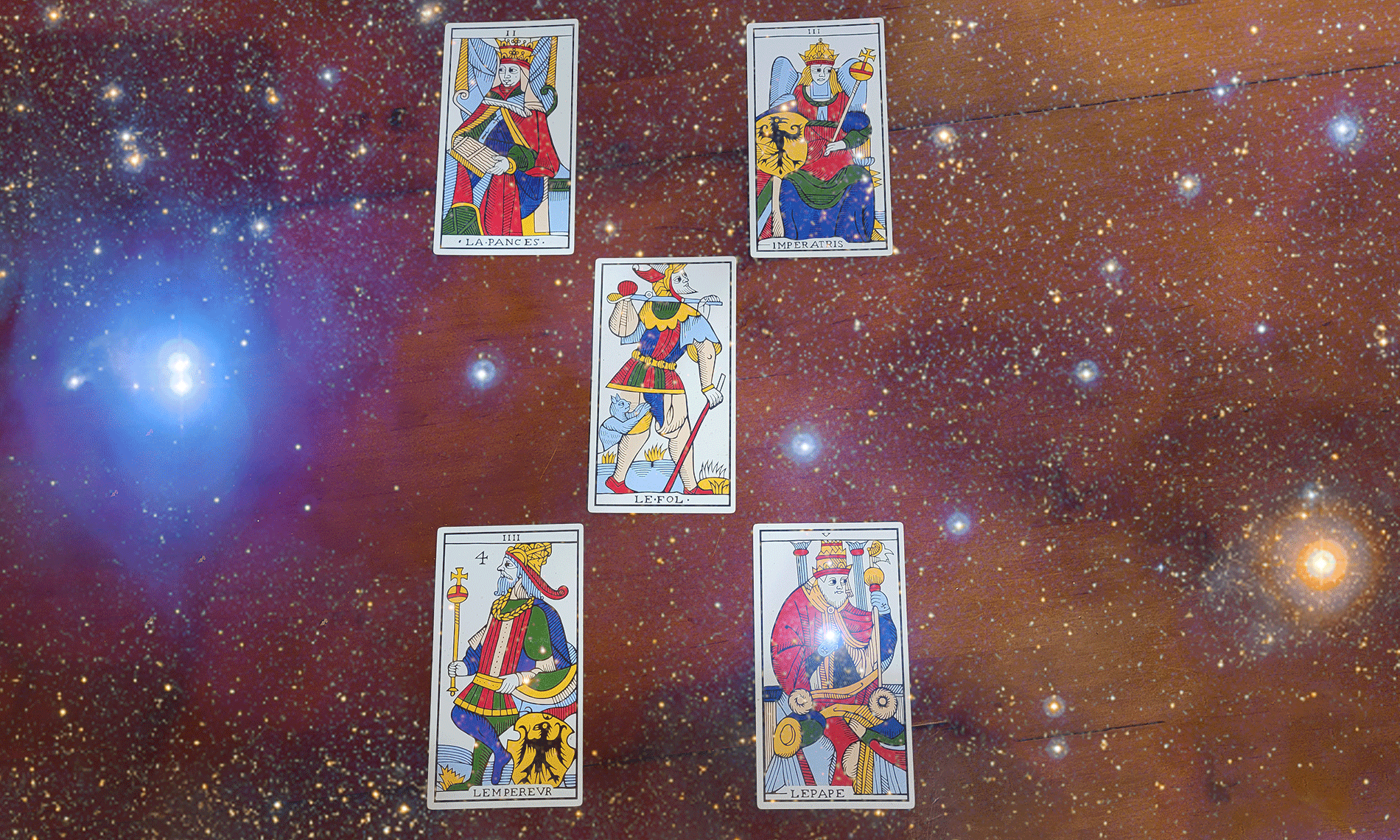 The test flight took place on a Friday. Remember all these details, it’s important. Everyone gave me a report. I was able to see that the flight took place according to my guidance, even though the first memories — the most striking, but not necessarily the most interesting — are about the relationship with their children.

The participants reported only incomplete bits. I myself, yet the guide, had no overall vision. It puzzled me, and I remained so until a first e-mail from one of them. Then my memories came back, whole, complete. It will be the same for each of the Wolves of the pack. The reports of the other Wolves revive memories that are never far away.

This one didn’t tell me about his children, but one of his sentences nailed me to the spot:

First email I woke up quite a few times between 3:00 and 5:00 am. It’s pretty regular right now. I feel like there are five of us including you. I remember that we flew over the Indian plains in another era and also over the tribes in Mongolia. It’s really succinct. Short pictures. If there are any other things that come back to me today, I’ll share them with you.

Second email It goes back indeed, it was not a simple ballad of location. The gathering of troops, the four of us with the Nagual. It’s not clear but I feel it was intense. It’s there in the background.

Third email Last night I practiced qi gong and meditation. Here’s what came back: I’m still in this Atlantean life… I have to wake up at last, it’s time, stop thinking too much, listen to the body and act, act …. Spontaneously… you went back to sleep for a while but it’s time to come back. Like the feeling of being expected on the other side, in a much brighter world.
Meditation is most effective when I am in slight tension but relaxed, much like the tree pose in qi gong. When I have the right posture, I feel well the etheric or astral body, around the physical body and it leaves room for the other.

The most striking thing

In the first email “There are 5 of us including you.”
In the second email “The gathering of troops, the four of us with the Nagual.”
Third email “Like the feeling of being expected on the other side, in a much brighter world.”

This is a beautiful summary of our maiden voyage. We will make other flights with five, so that the memory is fluid for everyone, and also so that we can test in situ the group’s communication, expectations, observations, etc. So we will be fine ready for the flight of the Pack in January.

The content of the other stories is personal, and I don’t want to mention it here. There is no place for it, being outside our concerns. Moreover, it would not teach you anything important for your inner evolution. That’s my only aim. Now that you have learned all these elements, let’s go to the miracle! 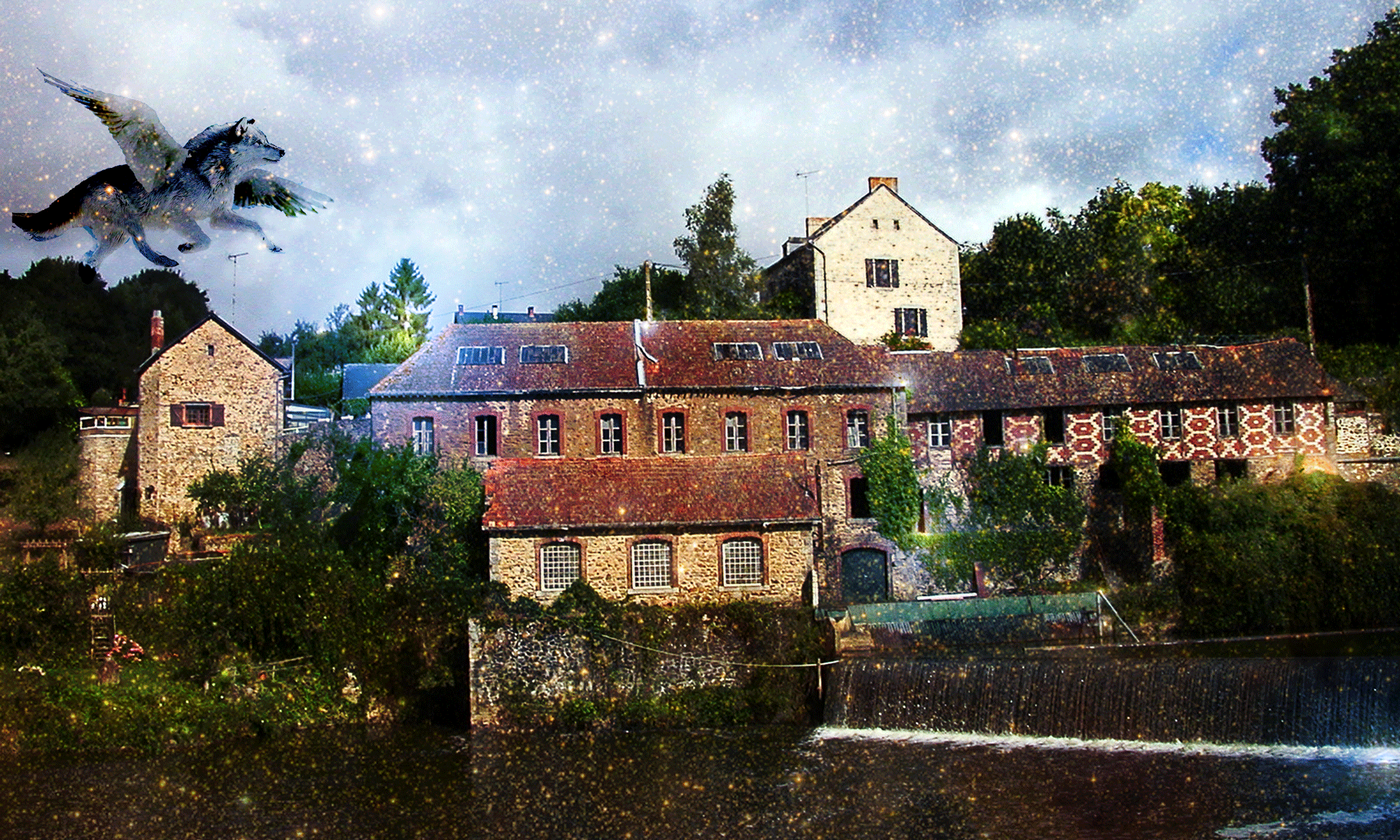 Thirty years ago, my benefactor the former nagual invited a dozen apostles to Rochefort. Apostles is a big word. Let us say that these twelve people were part of the informal circle around him. Only four people answered the call: Devic, Lama, Koala and I.

The Nagual announced with some solemnity that the four of us would form the first circle, and that after his departure for the other world, one of us would de facto become the nagual of a new cycle. I didn’t know it would be my turn. When the wine is drawn, you have to drink it. Devic is dead. Lama and Koala have disappeared on the horizon. Here is an excerpt from the diary I kept at the time.

Jeff tells me his battle plan. Friday evening, three people land at the Domaine de Rochefort: Devic, Lama, and Koala. I’ve known Devic since kindergarten. It’s a Wotan, an Orson Welles, a teddy bear, a traveling library, and the most delicious ride-along companion. Born organizer, full of resources and reserves, he is very capable, in the middle of the desert, to show off a booze of your favorite brand apologizing that it is not fresh enough. Lama, I know her too. For ten years at least. A remarkable spirit, a modesty that is no less. As for Koala, I have never seen her. Everything I know about her is in two ways: Jeff’s girlfriend, Vic’s great friend. Or the opposite…

Okay. So we have an appointment with the five of us. I’m delighted. But… what’s the buzz?
– To form the first circle, Jeff tells me. There are five of us, like the five members of the first circle in the Celtic initiation. Four warriors around a mage. You know, he continues, I had invited twelve people this weekend. And you see: there will only be four of you. The others could not be released…

I’m suspicious. “I’ll never be part of a club that accepts me as a member,” says Woody Allen. And I think like him.

A silence passes like a fish on a glider. “If it makes you feel any better, the others don’t know any more than you do. It’s a contact. Nobody knows what will happen. Especially not him. And it amuses him! Jeff loves improves. Against all odds, it works for him. Sometimes. We’ll see on Friday.

Twelve registered participants, four lieutenants around the nagual, on a Friday, 30 years ago all round… Let us not say that history does not repeat itself. It stutters! And not just the big story, the little one too. It seems that the Three Fates have only a limited number of scenarios, which they use to their advantage…

That’s what I wanted to share with you today. And this discovery from my past doesn’t just show the stuttering of Muse Clio. It confirmed a heavy trend, which seems inevitable. My benefactor gave me many good things — at the same time, I inherited his bad temper, his wrong tendencies, his very defects. He died ten years ago. I feel like he has taken refuge in my body. In order not to leave this world, he stood in my body which make an acceptable support for him. Probably because, during his lifetime, he had arranged it according to his tastes.

Since I entered into the logic and experience of nagualism, not only do I have my benefactor in me, but I also have his. Our practice was not transmitted by a living, but by books. Castaneda initiated us at a distance, through literary means. Magic, the highest magic, also goes through books. Today, thanks to them, I know who I am. Son of my benefactor, grandson of nagual Juan Matus, as Castaneda has been.

I see clearly that my benefactor — blessed be he! — has revived a tradition forgotten since the Gauls. Hence our belonging to the Wolf clan. All the Flying Wolves agree … Will it works still? We’ll see on Friday. 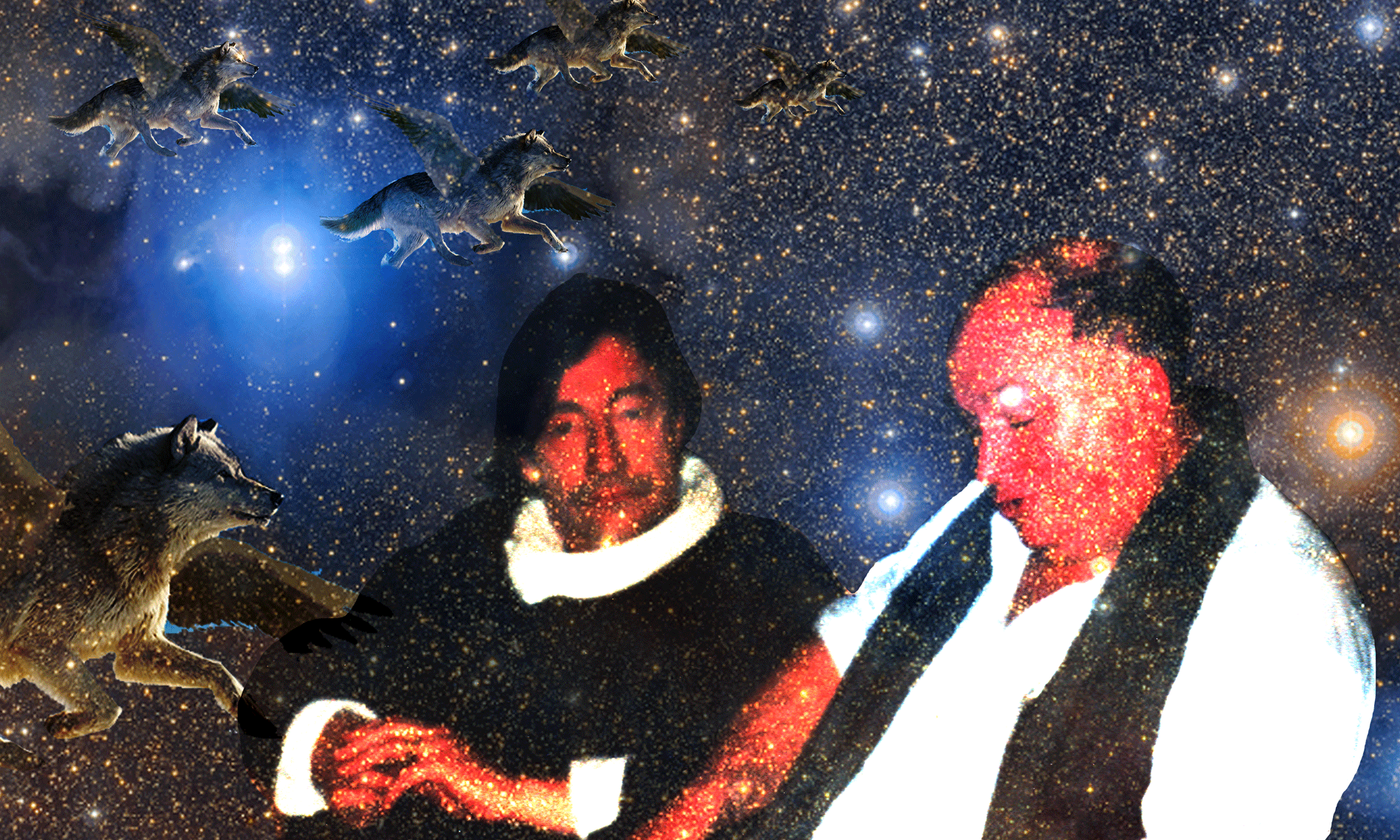