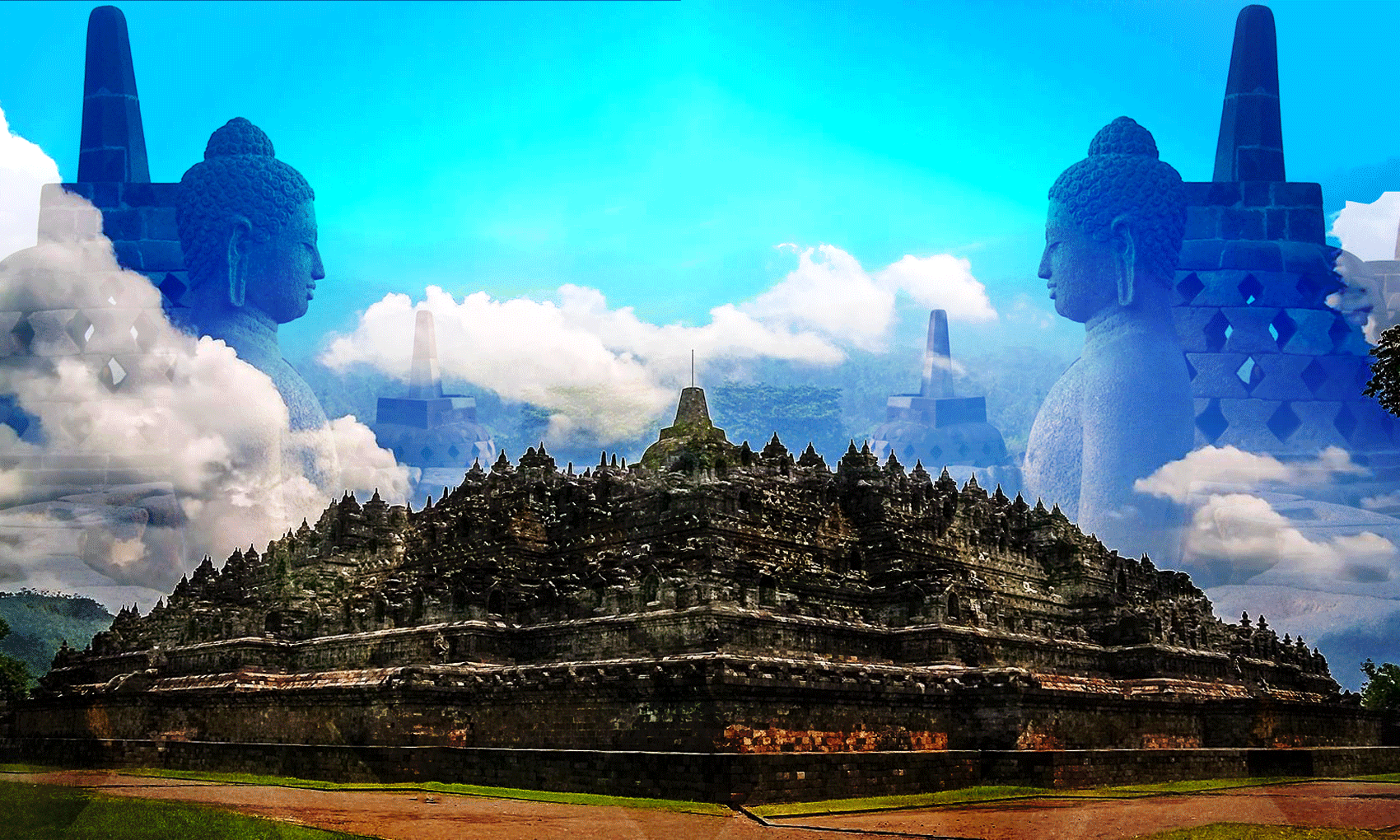 Stop laughing, here is a glimpse of some wonders of the modern world, with for each one an etymology that goes back to the language of origin, the golden language. It exists, we find everywhere traces of it. Imagine that it would be no more and no less the language of the gods, spoken throughout the galaxy. Vialac, from the Latin via lactia, milky way as taught by our masters, the former gods.

This galactic language -this Vialac- several authors are tracing and tracking it already. I had the opportunity to meet one of them, Alain Aillet, who became my friend and the best guide in this field. This famous golden language, we’ve been tracking it for years. Alain is the author of remarkable articles, I have added mine. Our joint efforts are focused on this issue with far-reaching implications.

So you will be able to read with the greatest profit, while enjoying yourself as it is not allowed — it is even indecent since it is totally free. Now if you’re itching, instead of scratching, make a donation. The form on the right is not there for decoration. Thanks to you without whom.

By Xavier Séguin:
The origin of languages — The Language of the Birds — The temporal enigmas — Fairy laughter — Divine names of the planets — Alcor, Ursa Major — The days of the week — The secret meaning of Breton Diwan — Bael Bec aka Baalbek — 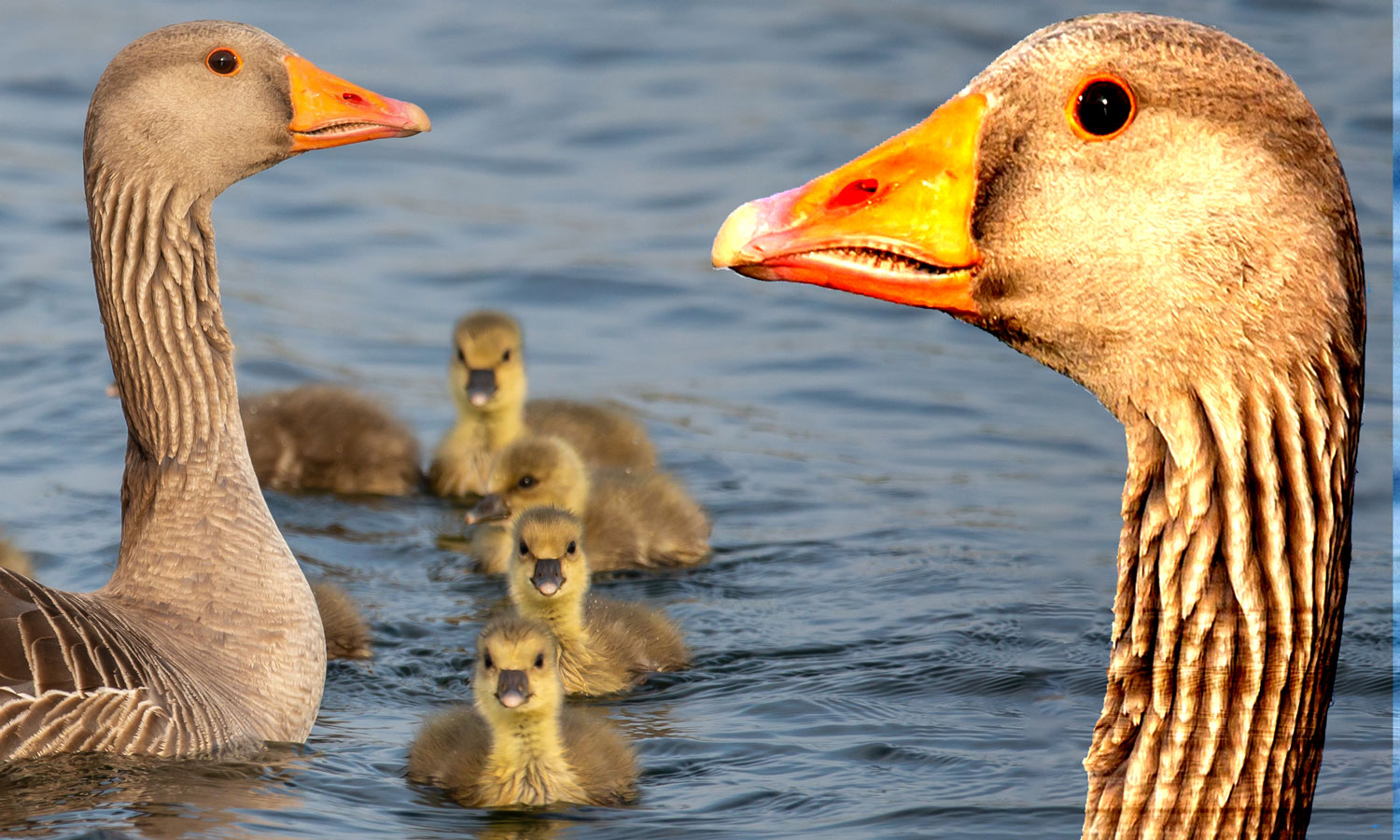 Alain and I, worthy offspring of Mother Goose, cordially invite you to study Old High German — a wild springboard for the galactic language! If you don’t like it, change your goal. All languages contain bits of the original language. The language before Babel…

Oh yes, the golden tongue was transmitted to us pure and perfect until the episode of the Tower of Babel, when the giants before wanted to compete with the gods. To punish us all, giants like humans, the gods decided to mess up the mother tongue. The Vialac tongue was scattered, sprinkled in all the languages of the earth, with a mystery: how to explain the fact that these original idiotisms were transmitted and even adapted in our modern languages? Everything happens as if the former gods have been keeping their weather eye open: the transmission of ancient knowledge must continue at all costs. It is important that the sonorities of words be forever a clear reminder of ancient holy history, forgotten, distorted, adapted by all religions with the sole purpose of establishing their temporal power and pre-eminence over other cults. 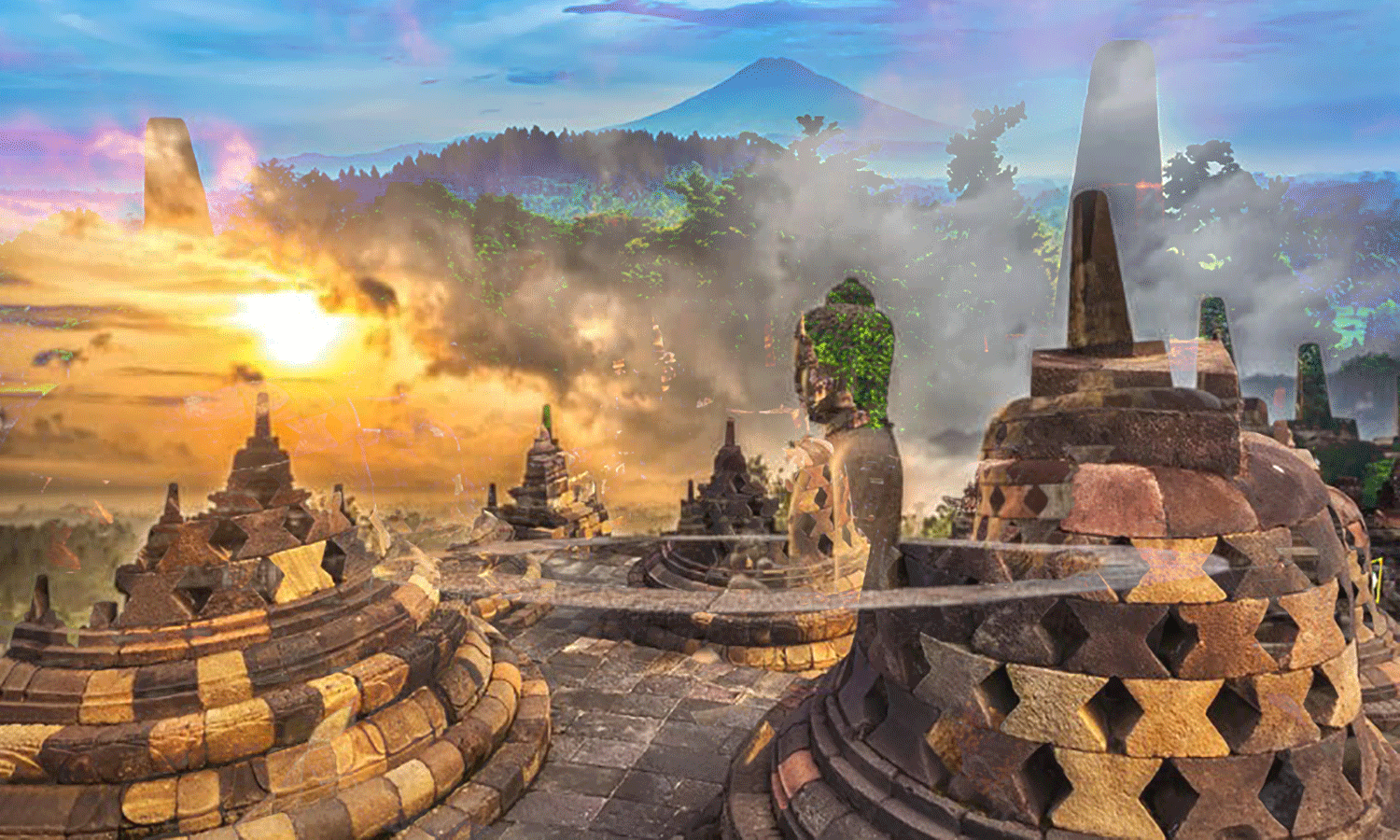 There are in South East Asia three sister cities, three similar civilizations, different and yet identical in their suddenness and unprecedented character of their achievements. Borobudur in Indonesia. Pagan in Burma. Angkor in Cambodia.

BORO BUD UR translates easily from the language of origin. Boro means suburb, suburb; borough in English. Bud is the bud but also the buddy in Oisons’ language. I take both. Borough Bud Ur = suburb of the Ur bud, or suburb of the allies (friends, friends…) of Ur.

Located in the center of Java, the site, built around the year 800, seems to have been abandoned around the year 1100. The temple is both a shrine dedicated to the Buddha, but also a place of Buddhist pilgrimage. It is both a stûpa and, seen from the sky, a mandala. It forms a square of about 113 meters of side with, at each cardinal point, a protruding part accompanied at the four corners by a recessed part.

It consists of four successive galleries of geometric shape. These are superimposed and the three highest form a representation of Buddhist cosmology. Like the entire monument, these galleries are covered with bas-reliefs relating the various episodes of the life of the Buddha Sakyamuni, over a length of about 5 kilometers and an area of 2500 m2. (source)

Bagan (in Burmese: ပ ဂ), formerly spelled Pagan, is a vast Buddhist archaeological site of nearly 50 square kilometers located in the Mandalay Region, in the central plain of Myanmar on the left bank of the Irrawaddy. From the 9th century to the 13th century, it was the capital of the kingdom of Pagan, the first Burmese empire.

Pagan does not require translation: same word in English as in other idioms. Note the presence of the suffix an, ahn: ancient, which comes from the gods. Does this mean that paganism is the faith of the gods? Did they pass it on to our first ancestors? A famous trail to explore, which alone would require a lifetime of study and research.

Last but not least, Angkor in Cambodia. Last but not least, Angkor breathes. Hundreds of temples drowned in lush vegetation unfold their admirable facades and the sculptures and the forecourt, the stairs, the colonnades or what remains of them, alas, Angkor is by far the most impressive achievement, In particular, the hydraulic control demonstrated by the site. In order to avoid repetition, I let the reader refer to the article I devoted to this archaelogical site. 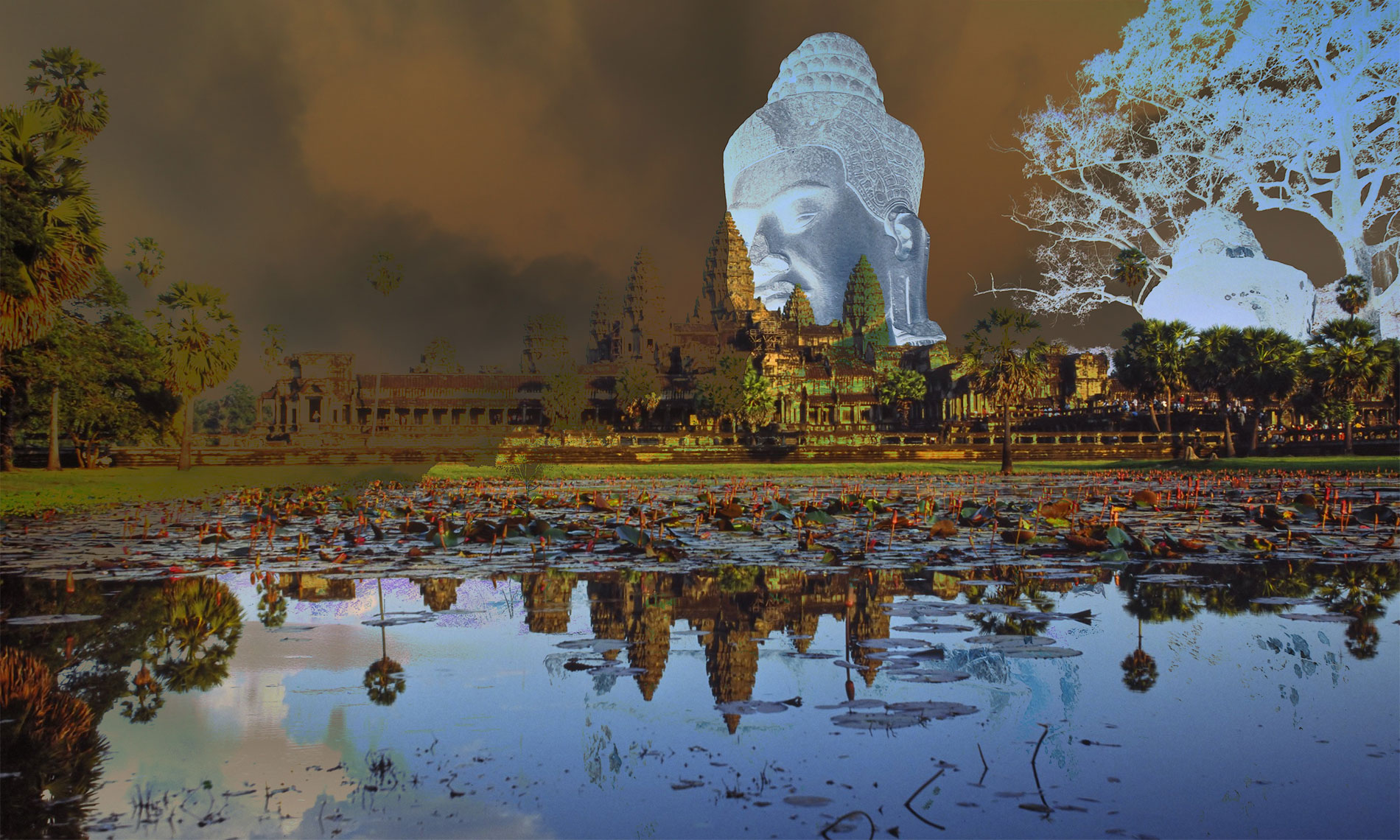 These three great temple cities were the heart of powerful kingdoms with vast and striking radiance. They developed very quickly, reached an unparalleled peak later, developing territories, deviating rivers, building hundreds, thousands, hundreds of thousands of temples adorned with sculptures too numerous to be counted. Their growth, their brilliance and their decline followed one another in a few centuries.

Out of nowhere, they returned to nothingness after having radiated their opulence, their invention and their incredible refinement. The question arises: what if we had helped them? It seems the period of the pharaohs of excess, Cheops, his father and two of his descendants. Before them, lousy pyramids. After them, lousy mastabas. A know-how falls from the sky, men take hold of it, then they forget it when the spring is dried up.

Builders of the Temple

We can also mention the period of the sacred builders of the Middle Ages. From the 10th century until the end of the Templars, builders possessed the art of energy or sacred construction. The Romans knew nothing about it. The primitive Merovingian or Carolingian churches are certainly moving, but on the vibratory plane they don’t quench my thirst.

A short period of time has been lasting this art of sacred building that uses the polarization of stones, the alternation of beds –ie horizontal row of stones– to transform the nave into a Faraday cage insulating the audience from the negative effects of Hartmann, Curry and other multiple networks, druidic wells, telluric faults and other joys and traps studied by geobiologists.

A very short period that has the good taste to coincide little or prow with the outbreak and decline of the Three Kingdoms of the Far East. Well, well, well. Tell me about it…

And I can add to these the golden age of Islam, with a host of technological inventions that seem to pop up out the thin air — or to fall from heaven. Yes, they are gifts of Allah, no doubt. This golden age of Islamic culture is at the origin of the later development of European civilization, began around the 9th century AD and continued until the 13th century. Again? Yes, again and again the same period. The spirit incarnated all over the planet for three or four centuries. Before, the outback all around. And after, a big setback… 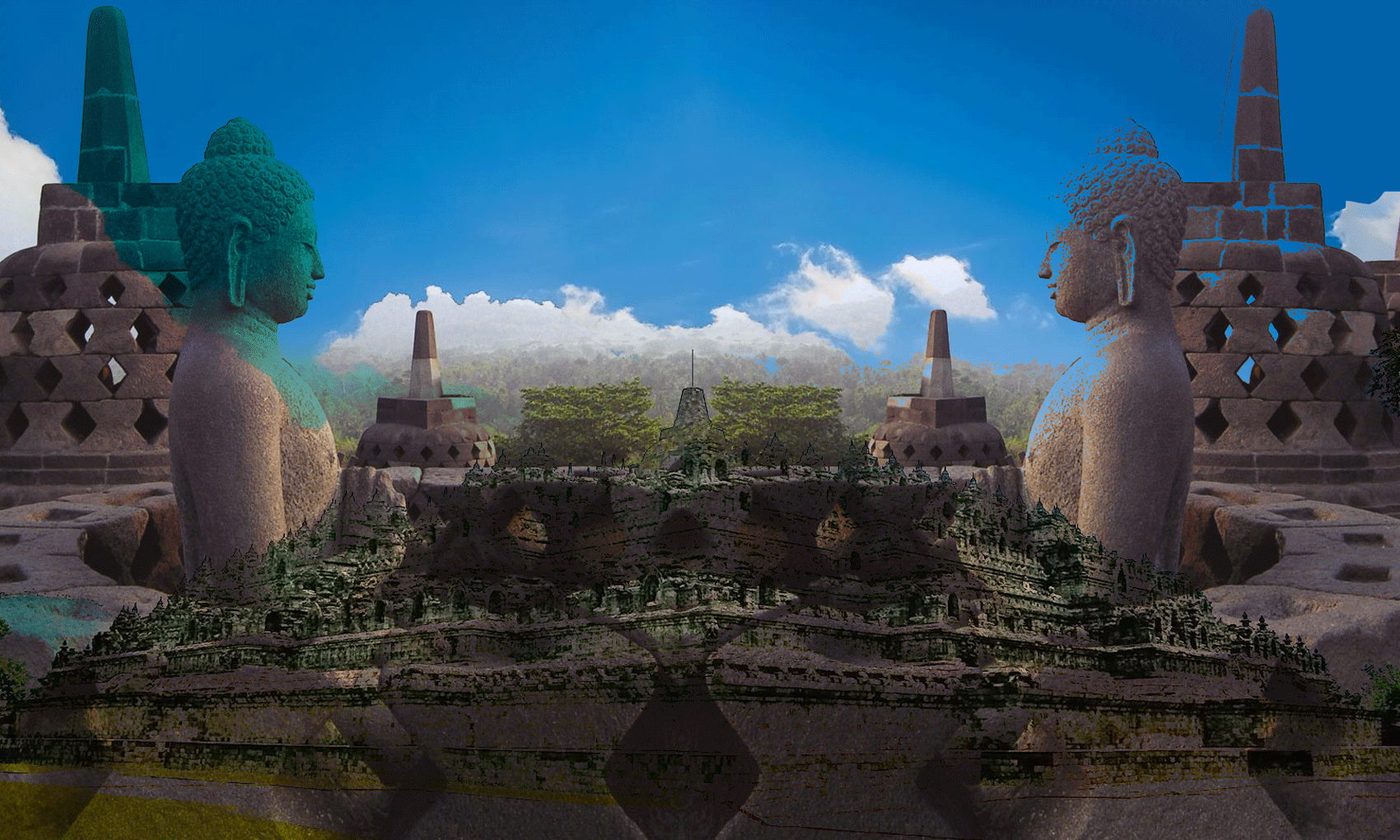 …And then go away

Why during these three or four centuries did the world experience such a frenzy of excessive buildings? And all built at great expense and with great pain by entire populations and for religious reasons. Temples everywhere. In Asia and Europe. And afterwards the desire to build is gone. The desire or the know-how?

In America, this same period is an interruption on the contrary. The Mayan pyramids were built in Mexico between 250 and 900, the Aztec pyramids still in Mexico between 14th to 16th centuries. If the datation is correct, wihich is dubious, it looks like an application of communicating vases. Once America, then the rest of the world. Here or there, you have to choose, not everything at the same time. Why? Our external aid was not enough to help the whole earth?

-Oh yes. Why not? You have any better proposal? It can’t be a coincidence, I don’t believe it. That synchronicity probably means something. No further idea. I turn to you and I ask the question. I’m waiting. That’s it? Either the subject leaves you cold, or no one’s read me for 3,000 years.

Horror! No reader remains. For 10’000 years I have been wandering in the Ear of the World, repeating my magical tales over music and all tones, in the vain hope of an echo, a sign, anything. Alas! If I have to surrender, I will surrender to the evidence. In the void, no one hears me scream. The Great Ear is deaf and dumb. And I’m dumber.