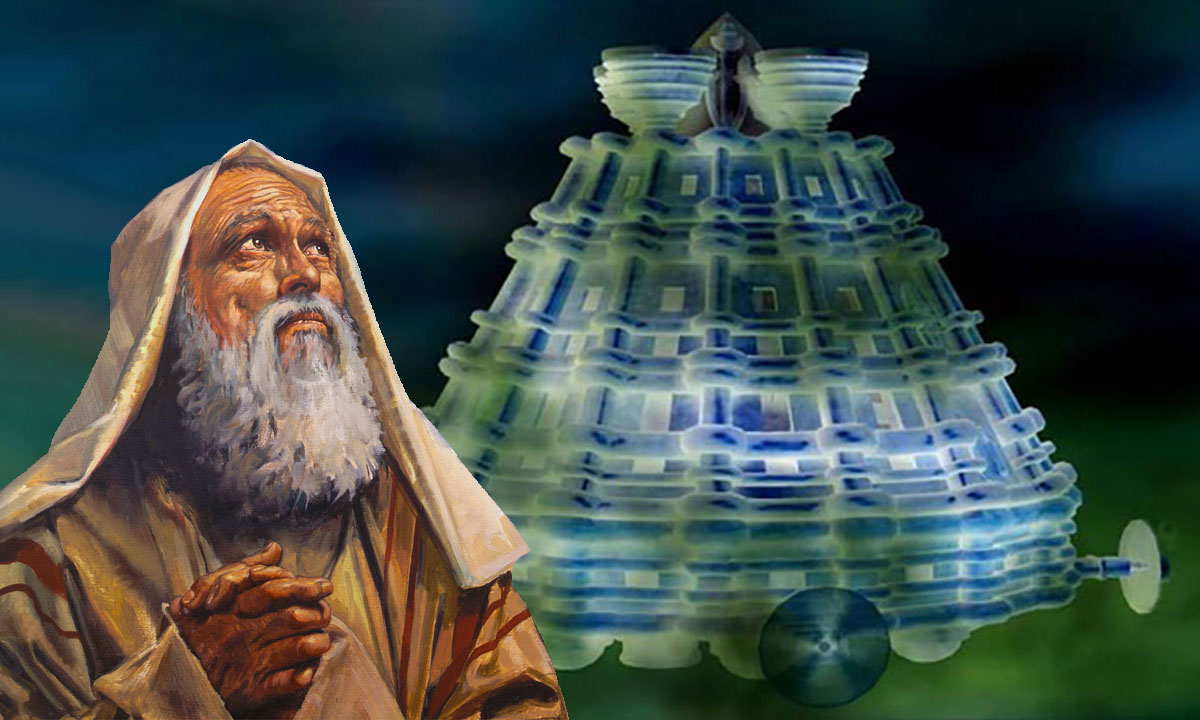 Enoch, my friend, you flew away. To all times, I am calling you! Surprise: the multiple echo answers me. Calling me by my name. Enoch’s thousand voices rise over time. Young or old, middle-aged or sluggish, Enoch is everywhere. Hunting on the timeline, I often fumble and stumble. Sometimes I miss my target. What’s up now? Never seen such a mess!

I had no bias. I knew that in the Multifold nothing happens as elsewhere. Here is not now, here can very well be there or elsewhere. It’s blurry anywhere, it’s big anytime. Time passes its turn instead of spending its time passing normally. I was expecting everything. I was served. The first place where my double omniscient steered my steps, it was on the old road 66 in the 50s and in a rotten Cadillac driven by his old friend Dean Moriarty. On the road again! His old friend ?! Where did he know him from? Enoch did not say anything. Hardly had the time to swallow a maxi burger watered with a hut-cola, he had disappeared I do not know where. In Chile ? In Peru ? I found it everywhere. He has always been cantoning. And the songs he sings come from the omnipresent. So I sit on the moment total.

I looked at Hyperborea. He was there too. Atlantis? I saw it for a long time. The flight from Egypt, the exodus? He spent all his childhood chasing after Pharaoh Tuthmosis says Moses. Enoch remembers that Moses was walking too fast. With the great Rama? He knew him as a young man in Celt Land, busy healing the crowds of some horrible disease. He was still called Ramos the Druid. Enoch found him again for his last moments, as he told us.

In Rome? He was Caesar. Later, he was the initiator of the young Emperor Heliogabalus. In Greece ? He was a pupil of the great Heraclitus, who was called the Obscure. Then in the 20th century, he was an agitator and troublemaker in the Young Turks Revolution. In Lyon ? He was Saint Irenee, the first bishop of France. Long ago, he had been Lugh the Flame, the eye of his forehead flashing lightning, better than the little Zeus he had commanded the lightning.

Much later, at the foot of the holy hill of Vézelay, he preached the crusade. In Africa he was Avicenna, Livingstone and Mansa Abu Bakari. In America, as  Quetzalcoatl‘s companion, he taught him how to fly space shuttles. In India, he lived for a time in the body of Hanuman, Rama’s companion. This elusive man does not seize anything. The lives go, vague fickle, they slip on him without wetting him. He has passed by here, he will cross again, he runs, he runs the ferret of the wood Ladies, the ferret of the pretty wood. (source)Old French Nursery Rhyme 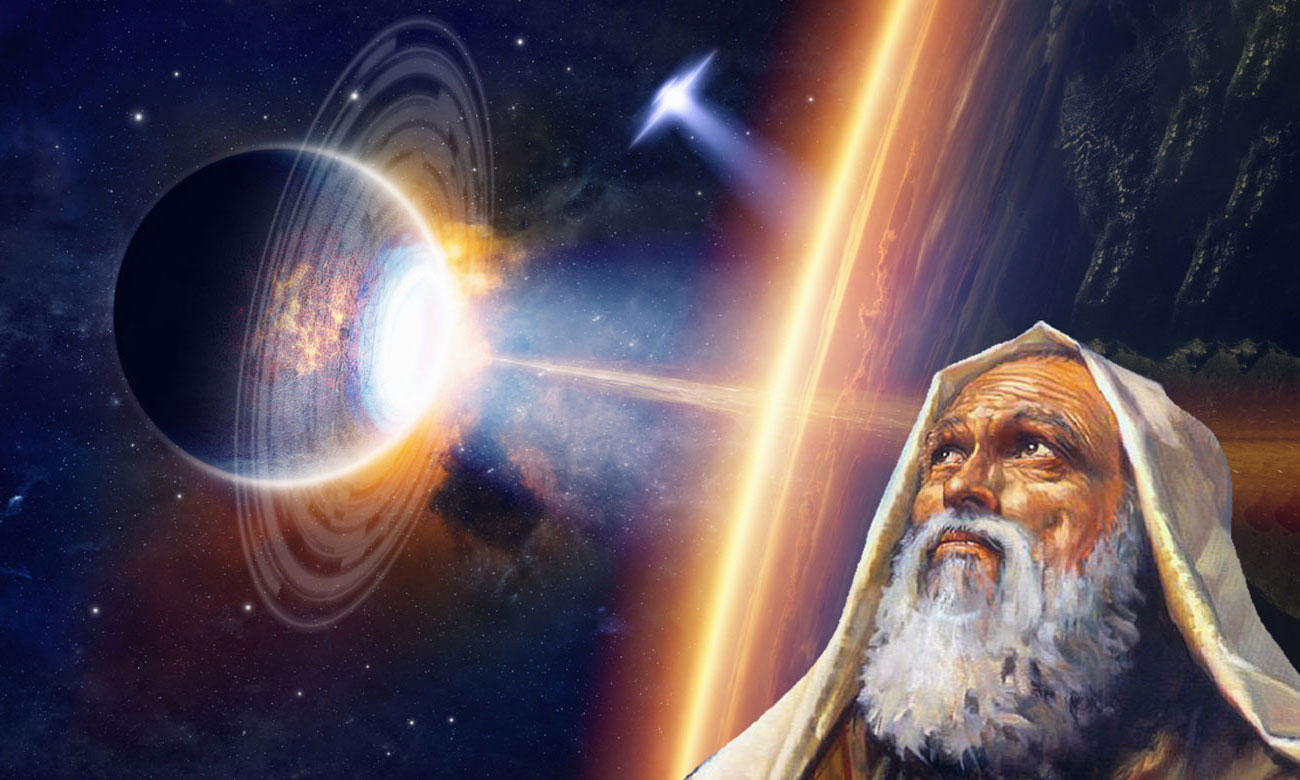 After I remember seeing him in a train, a big train of space spinning towards the stars. Near him, Dean Moriarty was busy trying to stop smoking. He was crushing heaps of unfiltered Camel with his pestle, while the handsome Henoch sprawled on a sofa was gently pulling on his shisha.
– This spatio-train follows Route 66, he tells me. It is a top route, the most famous since the Age of Patriarchs. The Olmecs knew it well: they got it from the Atlanteans. This road spirals through the 66 main star systems of the galaxy before arriving at the galactic center. Down there, the Big Black Eye has all the answers and asks all the questions.

Enoch is tiring me. We are already elsewhere, I missed the rest of this trip, I would not put a finger in the Eye. Enoch does not stop switching times, swaping places, changing atmospheres. Without warning, he changes pace, before my eyes he makes new faces. He’s in charge, I follow. I stick to him. Wherever he goes, I go. No problem. Except he’s sulking. I saw the face he made, not to mention the insults he gave. So he cheated on me. He’s such a drag with his bloody route. Yet I want to know. What was he waiting for in the divine Eye? To get younger? To know his future? To find new manhood? To heal his love wound? Did he want, like Gilgamesh, to obtain from the great gods the secret of eternal life? Did he want, like Merlin, to know the secret of eternal youth?

“You don’t get it,” said the Patriarch. I had a sacred mission entrusted by my Goddess. I went to the Great Eye to meet the Great Gods of the Center Eye. I was entrusted with a petition that I had to submit to the Galactic Council. As much to admit it, this mission was a bitter failure. My Goddess took a terrible slap in the face, she would have infinitely preferred to receive a good spanking of his loving servant.

Gee whiz! I see gorillas in the mist. Again he’s changing times and countries. This mother sucker is a pain in the ass. I cut him off:
– What the mission for, oh old libidinous?

– Leave my libido alone, you virgin bastard! The mission purpose was to nominate our beloved Mother of Gods for the title of Great Creative Goddess, and to nominate all her Terra Mission subalterns as Gods of Creation. I got strong arguments. Our gods crossed the eons to terraform the Earth, to lay out its rivers, to dry up its marshes, to fill its abysses and to carve its cliffs. They have dug its ground from a gigantic network of tunnels that pass under the mountains, under the bed of rivers, under the ocean floors. They populated the Blue Planet with magnificent animals, many of which were created for it. Finally, they conceived a divine race to ensure Terra’s guard and prosperity.

Change of scenery. Venice. We are both sitting in the back of a gondola passing under the Bridge of Sighs. The gondolier looks a bit like Dean Moriarty. Except he’s smoking.
I can not help smiling: What divine race? The human race ? No kidding ? My guess : all the Great Gods were laughing out loud !
– You drooling fool! There is nothing to laugh at! That’s what I told them but they did not calm down – on the contrary! Man, if you could stop laughing like a damn sucker, I’ll be pleased! The Great Gods of the Central Eye rejected my request, they treated me unwelcome, and the return trip was the saddest of my life. You suspect that Hathor took it badly. She refused to pardon me. Good gods !! How can you laugh at it, you stupid idiot? 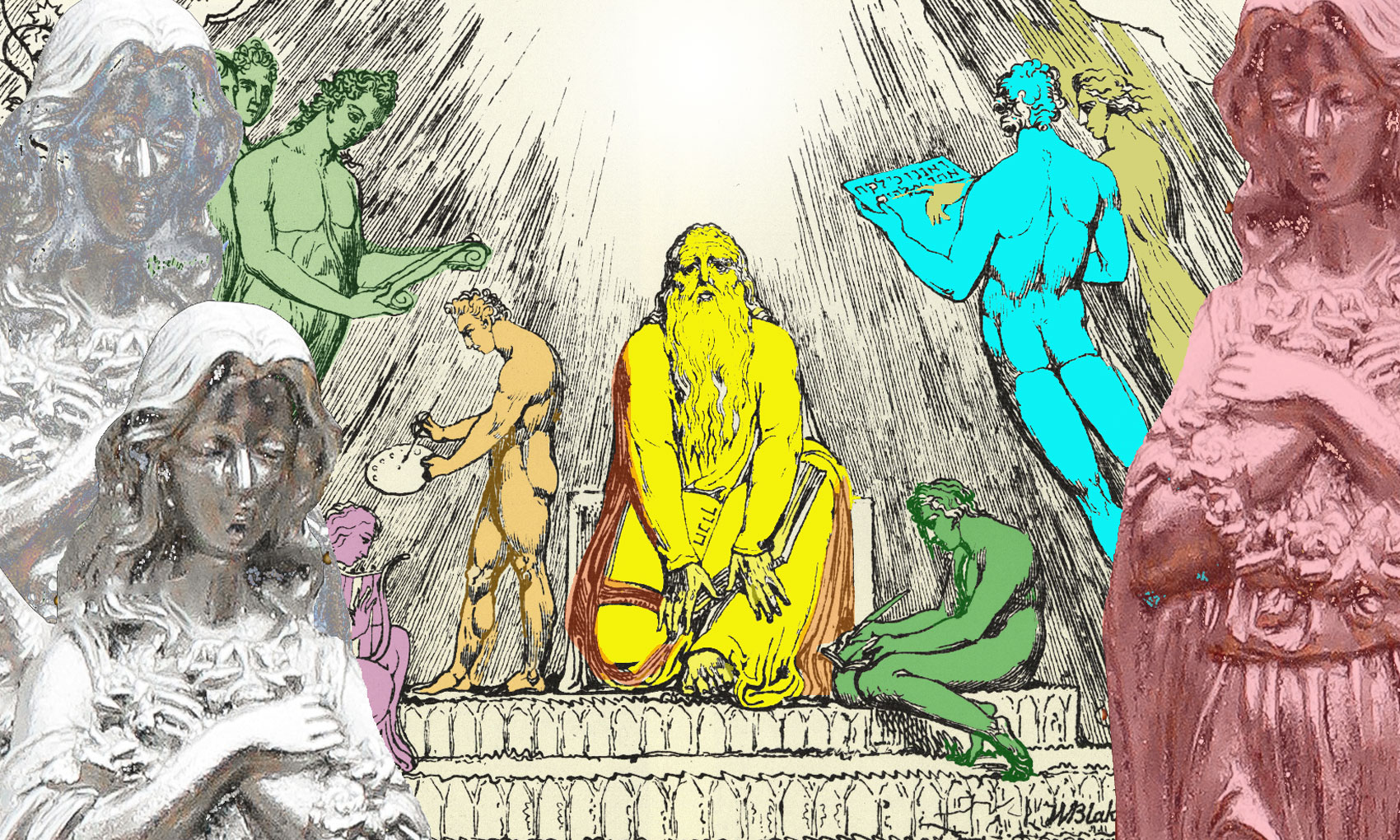 Let Enoch cheat me, let him treat me with all the names he likes, it’s his life, I do not care. But virgin! Imagine! I’ll be 70 soon! It is true that it is a day in his life. I can not account for his earthly years. Anyway they only give a pale idea of ​​his real longevity, which must be counted in galactic years. A galactic year lasts a little over 237 million Earth years. In other words, an eternity!

Counting the time by billions of years, Enoch already haunted the Earth of the first ages. I remember seeing him in the big sick body of a Tyrannosaurus in agony, hammering a fucking slam that almost cracked his head; he was lucky enough to change his shadow before losing his mind. Crazy, he was often, aboard a nave with his band, at the bottom of the snake pit or in the soft hollow of a nest of cuckoos. He knew baby Horus in the manger, with the donkey and the ox. Kneeling on the ground in front of the Goddess Isis, he was the Ravi who delighted the Provence christmas, kind of a fool on the hill. Ravi, he was so many times, during so many climbs, so many abductions, so many kidnappings of the third type that he had to undergo as Ascended Master.

Enoch wanted to know how I traveled in time without chronoscaphe or any divine machine. How funny! I am the divine machine myself. My body can do that, like many other deeds. Enoch is interested.
– Do you pronounce the magic formula? he asks.
– What formula?
– Eng’wyen Tyrritenglin. It’s Elvish. Do you say that to travel in time?
– You kidding! No fucking formulas, no machines, just me and I! Anyone’ can go where he wants, when he will. It’s called astral travel. Give me a punch. Go ahead, do not hesitate, hit me.

He did it. His hairy fist went through my face. He did not feel anything, so I didn’t. Enoch is stunned. Welcome to astral! I do not have a solid body, I am just a hologram, an image in relief. My body has remained in my present, far in the future. I doubt he can get anything, but I explain anyway. He nods. He does not look convinced.

In turn, he explains to me what he understood of the Multifold. He calls it the Folds of Time. When one is at this place, all the worlds are wide open. All plans are accessible. We don’t even have to choose, just take three steps in the future and we find ourselves anywhere in the past without ever leaving present time. He would like to understand how I can stuck with him so close. How can I follow him wherever he goes? I’ll tell him if he tells me how he plans to get out of here. And how was his arrival in the Multifold … 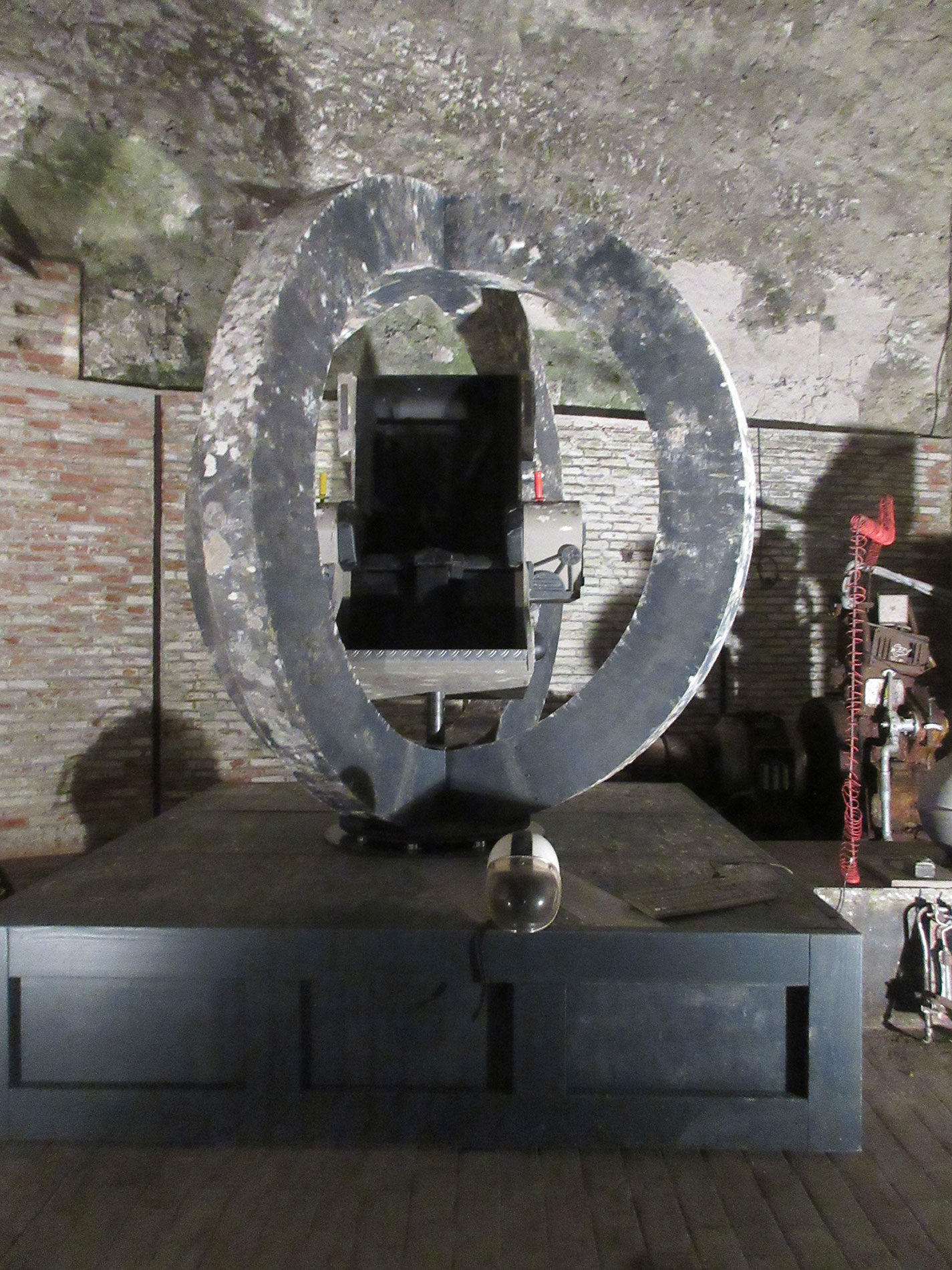 Here we are in Rome, at the Coliseum, playing full monty on the arena sand. Behind the bars, lions and other wild animals look at us roaring and groaning. Already Enoch laughs elsewhere. This guy is crazy. Slouched in his sofa, he pumps his shisha. Everything changes too quickly. Enoch pulls me by the ear.
– I don’t like you, he says. But you have the merit to be with me for a hundred years or so. Time is not the same here, nor space. What you understood already. Well, well. I will satisfy your curiosity. I’ll tell you how I got to the Folds of Time, how the grand knight welcomed me, whatever you want. In exchange, you will give me your secret. We have plenty of time, right? Let us use it.