We can ask many questions about God: all will remain unanswered. What one can attempt to answer is where does come the word to designate him. French word Dieu comes from the Greek Theos, who first gave Zeus, and also Dieu. Whenever one says Dieu, Deus, Dios, Dio, Theos – whether one is Christian or not – one refers to Zeus, a pagan superman who had nothing of a single god.

The word dieu is also reminiscent of Dionysus, which means the god of Nysos, or better: the Zeus of Nysos … But only the Latin languages ​​have retained this word. For the Nordic and Anglo-Saxon languages, this root Zeus does not exist. It may be that the root used by these languages ​​comes from the word Go, which means bull in Sanskrit. Indeed, according to Jean-Clarence Lambert,Labyrinthes et dédales du monde, p.10, the Sanskrit word Go (bull) would be one of the etymologies of the English word “god”. It would have given Gud in Scandinavian, Gott in German and God in English. Friend readers, I propose today to introduce you to the bull god …or the Taurus God.

In the oldest traces of pre-ancientyes, I assume this ridiculous barbarism since there is no other way to say religions, one finds the trace of the bull –deified for itself, or as a companion of a god. “Son of the earth, expression of the chtonian forces, welcoming, passive and at the same time … symbol of the active principle producing seed, the bull was a sacred animal in all the civilizations that domesticated the cattle.” (source)Paolo Santarcangeli, Le livre des labyrinthes, p. 234 The bull is Shiva’s vehicle. The bull is God Shiva himself. Apis, the bull god, is identified with Osiris. The bull is the sacred animal of the Minoan era, the ancient Cretan god revered since ancient times. (source)Alain Daniélou, Shiva et Dionysos, p.144 Well before the era of Taurus –or Taure to be precise. Remember that the astrological era of Taurus began around 4000 BCE … ie 6000 years ago. But the ox god has appeared much earlier.

“In Anatolia, at Çatal Höyük, we find the first representations of the bull god in the form of a boy or a teenager or a bearded adult mounted on his sacred animal, the bull, with bull’s heads attached to the walls.” (source)Alain Daniélou, Shiva et Dionysos, p.144 The site of Çatal Höyük dates back 7th millennium BCE. Well before that, the bull was already an essential figure of Paleolithic art, as evidenced by the magnificent bulls of Altamira in Spain and those of the Lascaux caves in France. 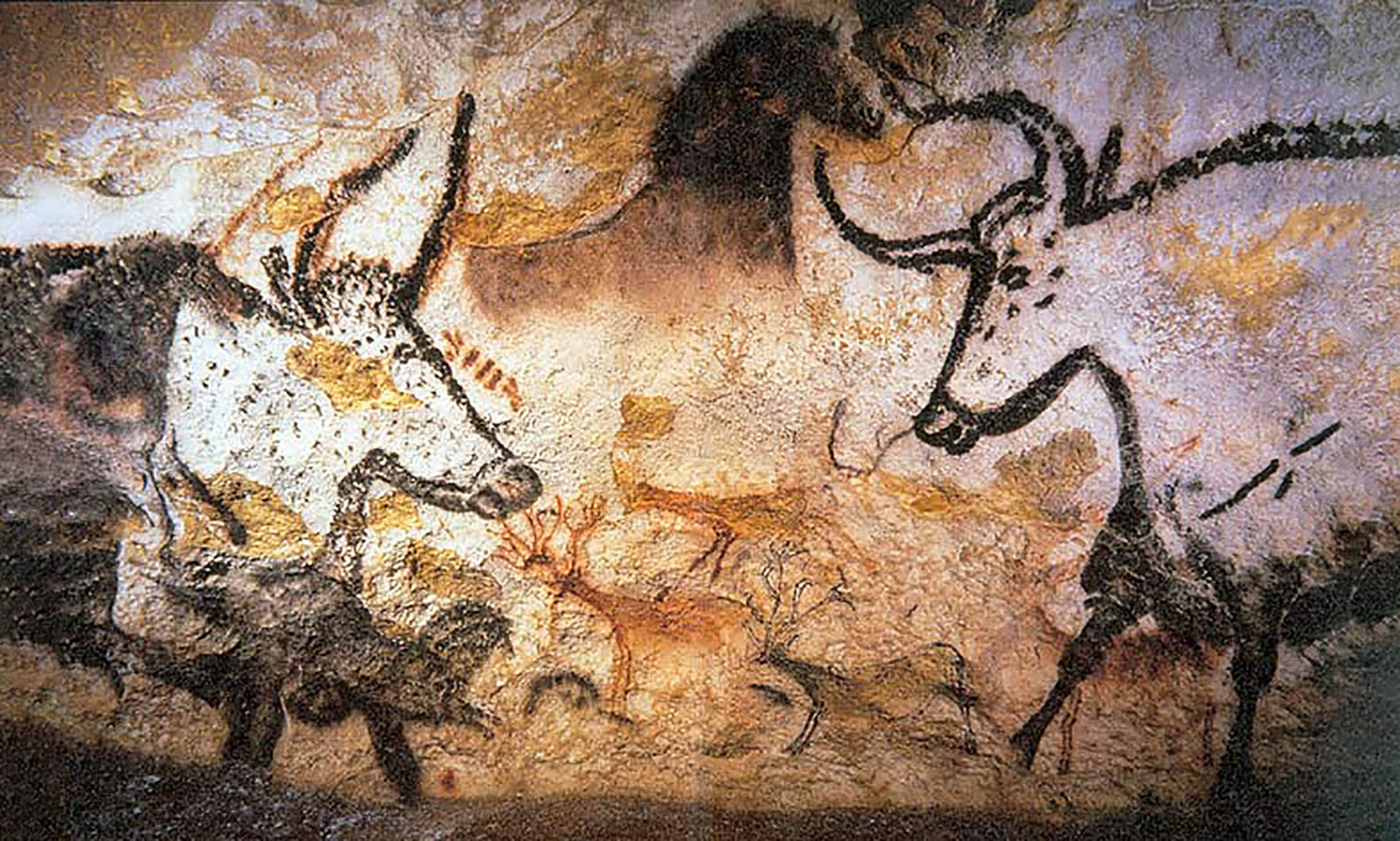 “The bull also played a central role in the oldest known religions of the Mediterranean and its periphery (Mount Bego, Crete, Anatolia, etc.) It is believed that the bull was regarded as the visible agent of the invisible force that moves. The Egyptians revered the sacred bull or sacred ox under the name of Apis, and at a late period this Apis had become the type of  Taurus, the equinoctial sign, then the first of the twelve signs of the zodiac, which Osiris –ie the Sun– had made depository of fertility.

As in many Asian religions, the bull had been adopted from the earliest ages by the Aegens as the symbol of strength and creative energy. He later became the emblem of the Great God who was a counterpart to the Great Goddess, and played, as such, an important role in the Cretan legends; it even happened to be incorporated into the divine nature: the Minotaur is analogous to the bull god of the Elamites, or the Enki of the Sumerians, who was also “the wild bull of heaven and earth”. (source) 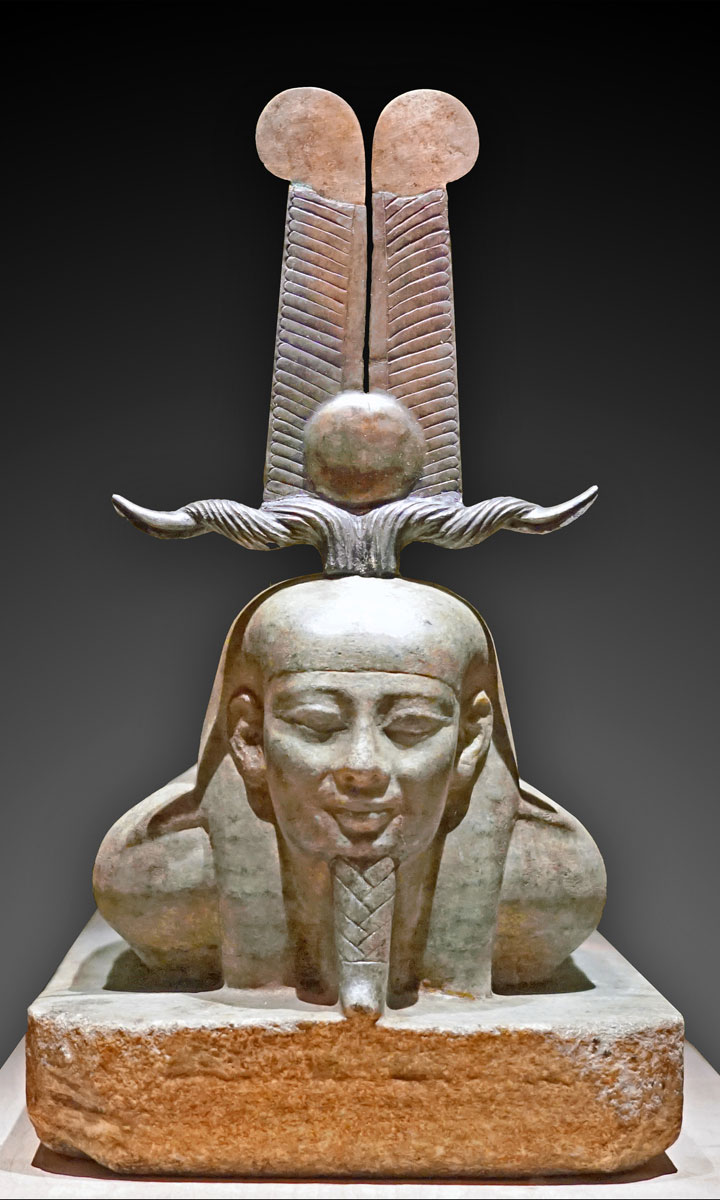 Here commes the question why. Why a bull god? Why a male figure, dominant, destructive? The cult of the cow can be understood: it gives milk, it is the nurturer of many tribes, like the Masai or other African tribes, and like the nomads of Asia. The cow and its like was sacred long before the bull. I explained how Hathor is the incarnation of the Hindu sacred cow.

We also know that Native Americans worship the memory of the White Buffalo Woman, another divine incarnation of the sacred cow. And then came the Bull. The quadruple figure of the Tetramorph shows an ox, a bull without balls … kinda no-ball bull I daresay. It is also the figure of the ox found in the mythical manger of child Jesus.

The divine sequence could thus be written in the order of appearance on the screen: the Taure, the Bull, the Ox. Again, why? Why did a female animal give way to her masculine version, then to the emasculated one? I assume that chance does not exist. Chance is “hasard” in French. Al Azhar, Cairo University, is written as Ouzir in Arabic, a language without written vowels. Ouzir is Osiris. Chancehasard in French is a divine manifestation, if one understands divine in the ancient sense, far away from the present meaning.

Chance, as C.G. Jung has shown, would be better called synchronicity. I therefore assume that everything is meaningful. All that happens never obeys at random, but always to a necessity. It often happens that this necessity is not perceived because it is too interior, too spiritual. Too far-fetched to the reasonable majority of dumbs. We are talking about chance. But that does not exist. Chance, an absurd notion, was invented by materialist scientists, calcified in the unfathomable world of pure reason. All that is pure is undrinkable, said the poet. I subscribe. 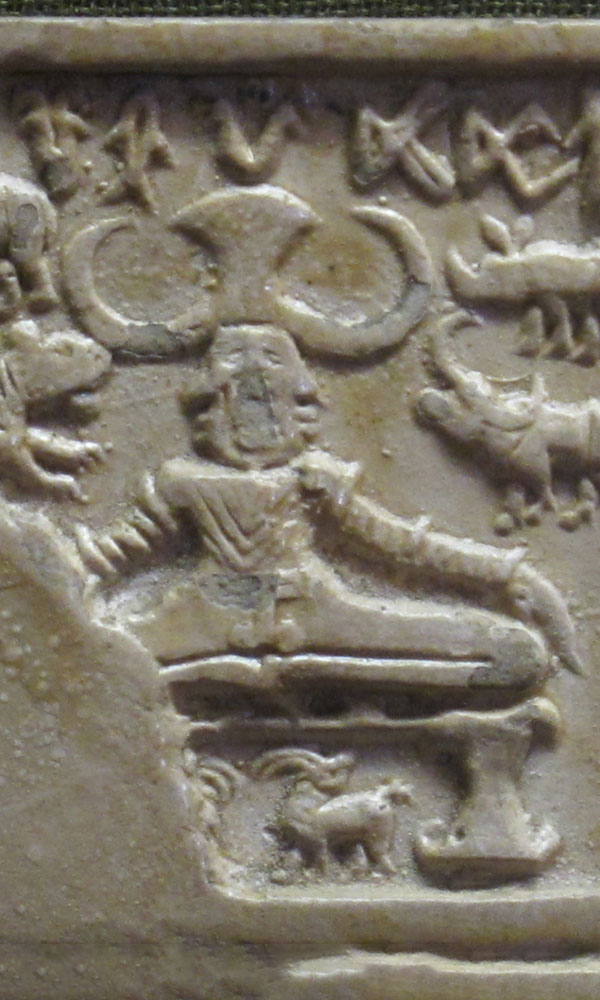 On a seal discovered at Mohenjo-Daro, dating from the 2nd millennium BCEbefore the common era, we can see an ithyphallic bull god – that is erect. Alain Daniélou identifies it without hesitation to the god Shiva: “We see the ithyphallic (urdhvamedhra) god Shiva sitting in yoga posture. His head is crowned with bull horns. Many horned masks and representations are also found in Mohenjo-Daro.  The unicorn bull is also represented there.”

Nowadays, we no longer identify this yogi with Shiva, because this god is assimilated to later Hindu gods, like Vishnu, Indra and Brahma. I therefore agree with Daniélou’s opinion, I do think he’s Shiva. With an erection. The pre-eminence of the male sex is asserted here without ambiguity or shame.

For me, Shiva is the figure of male triumph. This erect god represents the victory of the masculine principle over the feminine. After entire eras where the Woman reigned as undisputed leader under the aegis of the Reptilians, the time has come for the overthrow.

The male power has its origin with the bull god. The Matriarchs saw their power defeated by male warriors who, first, dared to stand up to them. The female power had lived, carried away not by the male revolt, but by its own excesses.

Let us not forget that the Matriarchs began in love and respect for all living creatures, to end in the foul barbarism of the war of the sexes, with the Amazons, private guard of the Goddess, who stalked and emasculated men, before roasting them on the barbecue.

The Amazons correspond to the archetypal figure of the praying mantis  –the female insect that devours the male after copulation. Like the praying mantis in relation to its little male, the women were giant compared to the little males who had about today size. I told this little known episode in the article Lilith And Little Adam. Adam is not an individual, but a group. We should write the Adams. The Addams familySorry, I’m kidding … It is none the less true that many Biblical or other mythological names must be understood in a collective sense: Quetzalcoatl, Enoch, Lilith, Eva, Adam, Lugh, Cuchulainn, Viracocha, Rama, Merlin, and many others. others are both a people and the leader of this people.

After the decline of female power and the virtual disappearance of the female giants, which may also be called the Liliths or Matriarchs, a dictatorial male power carefully removed from the archives all traces of this cursed period. It was then that the names of the Goddesses and Generals of the army were masculinized. Thus, the goddess Hathor became Thor, the Scandinavian god who has no more historical reality than Jesus, another famous invention. The worship of the Mother Goddess was replaced by the worship of God the Father -or the Godfather?- leaving many incongruities. A maternal mother, as were Isis, Athena, Hathor and many others, can easily be conceived. But the males are much more brawling, full of morgue and revenge, animated by a warlike instinct and destructive impulses.

This is why the God of love is not very convincing in his male version. It is enough to read the Bible to find that Jehovah / Yahveh behaves not in god but in army chief, not in paragon of love but in capricious hangman especially motivated by the ego. This obsession with being recognized as the only god proves enough that there were others. Yahveh had nothing of a good Christian, who must love, forgive, be kind and sweet, all qualities that would be vainly sought in Yahveh or any other “unique god” of the Bible – Elijah, Elohim, Adonai, Jehovah, Yahveh, there are a good dozen! Not to mention the most famous, God, a fierce bull with an erection, or Dieu, name of a Greek god quite pagan and not at all unique either, Zeus. Incidentally, Zeus doesn’t behave as a master of the gods, but rather as a prince consort of the true patroness, Hera / Juno.

Well, that’s enough for today. I will tell you later another day.