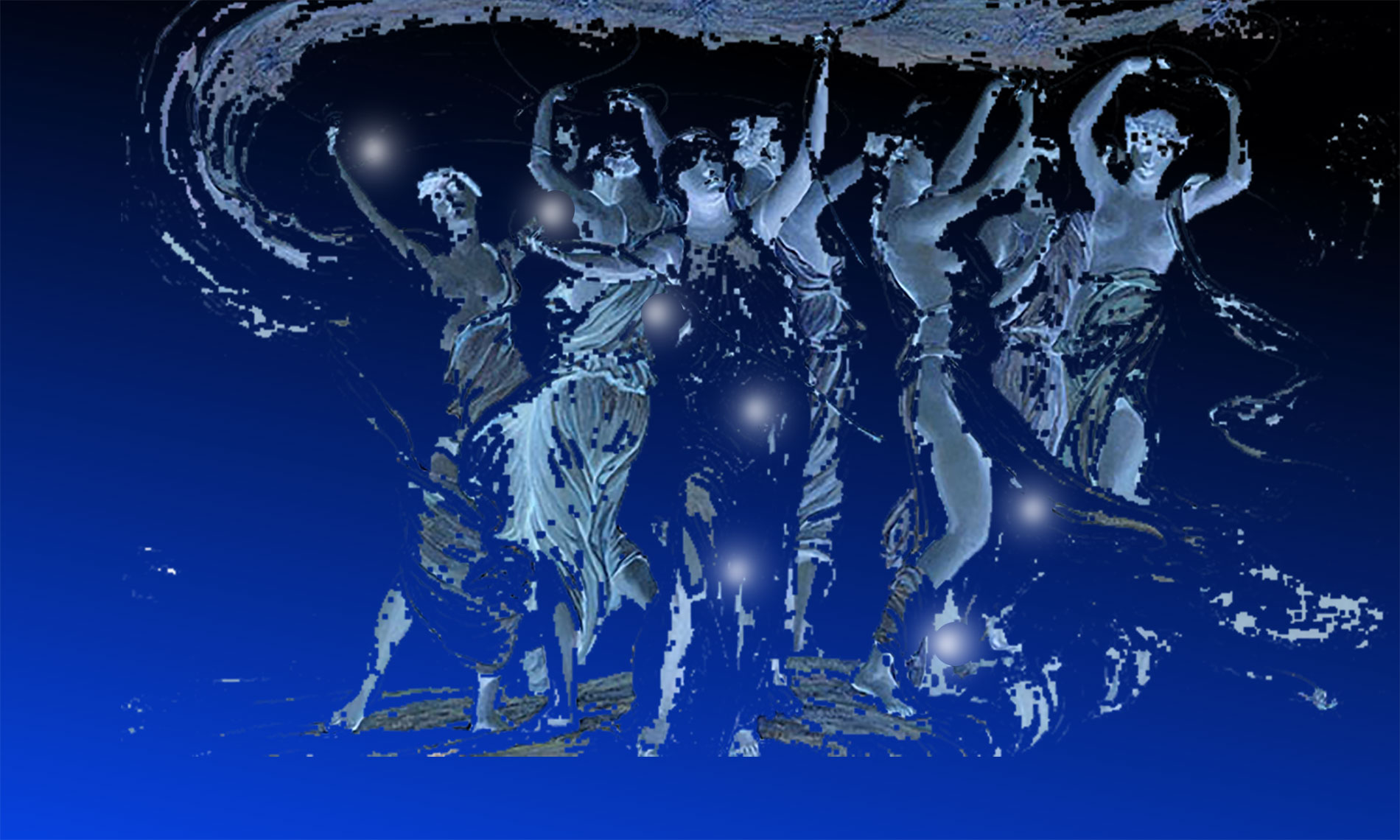 The seven daughters of Atlas play a very singular role in Greek mythology. They are of little importance in themselves. What matters most is what they represent: an indication that I will call historical. Atlas, son of Poseidon, personifies Atlantis whose name is derived from his. Thus his daughters are the heirs of Atlantis. And the Greek myth says they went to the stars …

At the dawn of our history, in a very short time and in different parts of the world, appeared agriculture. Shortly after, without past, without history, unprecedented, appeared some developed civilizations such as Sumer, the Cities of the Andes, and many others.

These astonishing facts do not surprise the main stream archaeologists. But many sincere seekers wonder about. Who helped the first civilizations to start? Some will say, “Developed beings from elsewhere.” Aliens. Others will add that these aliens have been transforming this planet for a long, long time. But this is another story…

The myth of a global civilization destroyed by a cataclysm is present on all continents. On this side of the world, we evoke Atlantis, continent engulfed by the flood, was the home of a hyper-developed civilization. It had spread over several continents by establishing settlement’s colonies. Would the seven daughters of Atlas be these first civilizations, coming out of nothingness like a devil out of his box? It is still necessary to admit the existence of Atlantis elsewhere that in the Dialogues of Plato …

Atlas is the son of God Poseidon, the Titan who founded Atlantis. Titans are giant gods. We have seen that the Titan Atlas carried the Earth on his back, which means that thanks to gravitology, the Atlanteans were able to straighten Earth’s axis. But that is not all. The mythology says that Atlas had seven daughters, the Pleiades. By spinning the metaphor, Atlas’ seven daughters could well be seven settlements founded by the survivors of Atlantis, to repopulate the Earth after the flood. 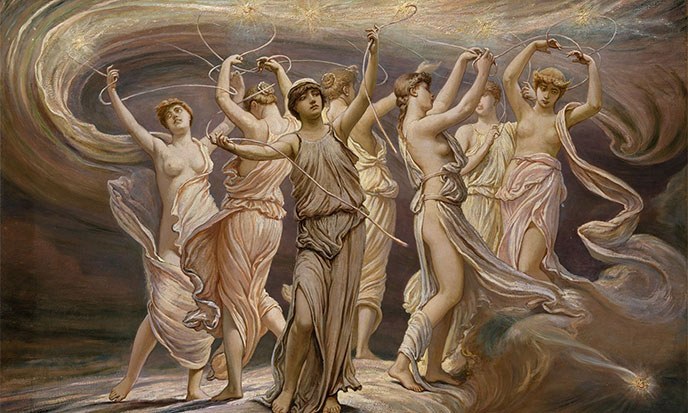 Will Hart, US journalist and filmmaker, listed the six points of the globe where appeared developed civilizations: the Olmecs in Mexico, the Chavins  in Peru, Sumer and Mesopotamia, the pre-dynastic Egypt, Rama’s empire in India, and the Xias in China. Six orphans, the track is promising. And if William Hart had listed the first six daughters of Atlas? Then the last heir of Atlantis, where do we have to search it? Fascinating enigma… From America until China, the Atlantean civilization was global:

The last Atlantean colony could be hidden anywhere.

Each of the advanced civilizations listed by Will Hart presents the same enigma, we do not know where it came from. The flood rises a time barrier, impassable for most of the researchers, because destructive of a maximum of remnants. But we just have to apply the same criteria to all the civilizations recently discovered, in the seabed around the globe, among others. Let us explore these tracks in search of the last heir of Atlantis.

Where Is The Seventh?

Could it be Anatolia, in Derinkuyu, Göbekli Tepe or Çatal Hüyük, which probably date from before the last ice age? Could it be Iraq, in the ancient kingdom of Babel, where flying machines were still working in 2000 BC, respected as gifts from ‘what is above’?

Could it be Dogger Bank, under the North Sea, where a sophisticated civilization would have disappeared at the dawn of the world? Could it be Scandinavia, among the peoples of Odin and Thor, coming also from the same pre-flood tradition? 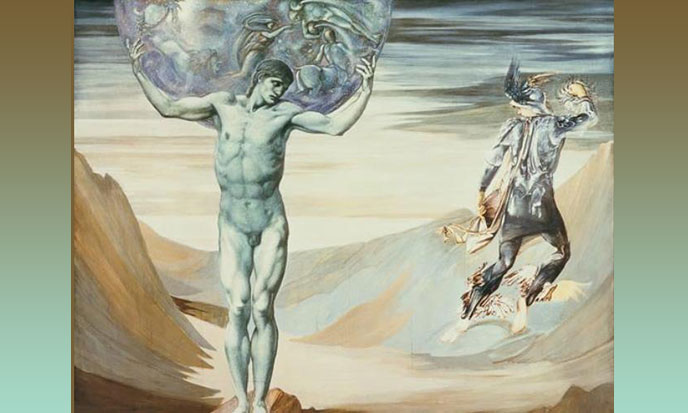 Could it be pre-Celtic Ireland, where the hero Cuchulainn reminds well of the Maya blond god Kukulkan? Could it be Korea, where some megaliths strangely evoke the menhirs, the stone circles, the burial mounds and the dolmens of the western Tuatha? Could it be the empire of Mu, among the builders of the megalithic statues of Easter Island, or among those of the temple-town of Yonaguni, Japan? Could it be the old Tibet of the magicians Böns, guardians of the underworld of Agartha?

Could it be beneath the sands of Gobi Desert, where a legend claims that very long time ago a divine civilization lived? Could it be under the ice of Antarctica, the sixth continent, from which old maps show the outline of the coasts, which are supposed to have been under the ice for hundreds of thousands of years? Could it be beneath the sands of the Sahara, where the Berber tradition locates Atlantis? Or on the Gold Coast, the refined culture of Yorubas, which also arose without past among the hunters-gatherers?

As we can see, the problem is not the scarcity of tracks, but their large number. The lost civilizations are more numerous than the pebbles on the shore. The forgotten worlds are piled up on each other, but we keep thinking the same thing. Every remain, every inscription, every engulfed ruin must be Atlantis. The seventh daughter of Atlas is a myth, maybe the most beautiful of all. “We only lend to rich people” as the saying goes. At the infinite vertigo of a trundle past, so many cities lie forever without hero, without memory,

and their names disappeared.

Undoubtedly, we are not the first.

If it is established for any mythologist that our civilization is his heir, all the developed civilizations before the flood should not be assimilated to the Atlantean empire. As its name suggests, Atlantis was Atlantic. So this is first on the shores of this vast ocean that we must seek the seven daughters of Atlas, the seven heirs of Atlantis. In America, we have the Olmecs or Toromagen of Mesoamerica and the Andean Chavins.

In Europe, we have the Tuatha and the Etruscans. In Africa, we have the Yoruba country and the pre-dynastic Egypt. And finally in Asia, we have Sumer. Without leaving the Atlanto-Mediterranean basin we have seven very credible candidates, seven highly ancient civilizations without known history, seven heirs of the two main religions of Atlantis, that of the One, very close to the Dravidian Shivaism, and that of the Eternal Trinity, that of Ram or Rama, who left from Atlantis to conquer India. 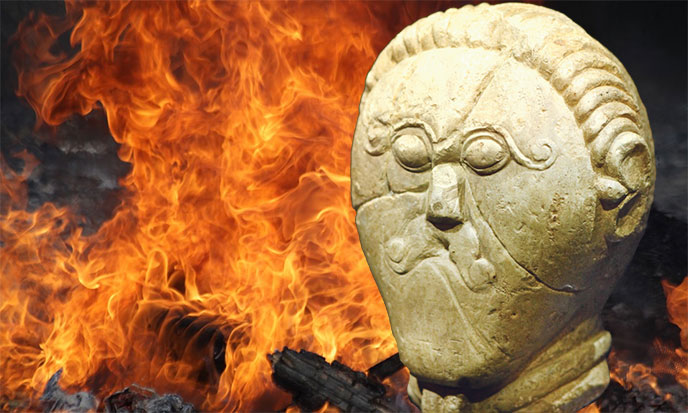 “If you want to entertain God, tell him about your plans.”